Welcome donors to a page where you will find news for and about donors, all in one place. Whether there is a report you may find interesting, details about a new fund, or a save the date announcement for an annual or special event, you will find it here in a quick and easy read. Want to read more? Visit ECU News to keep current, or visit ECU Events for details about all the latest public events. 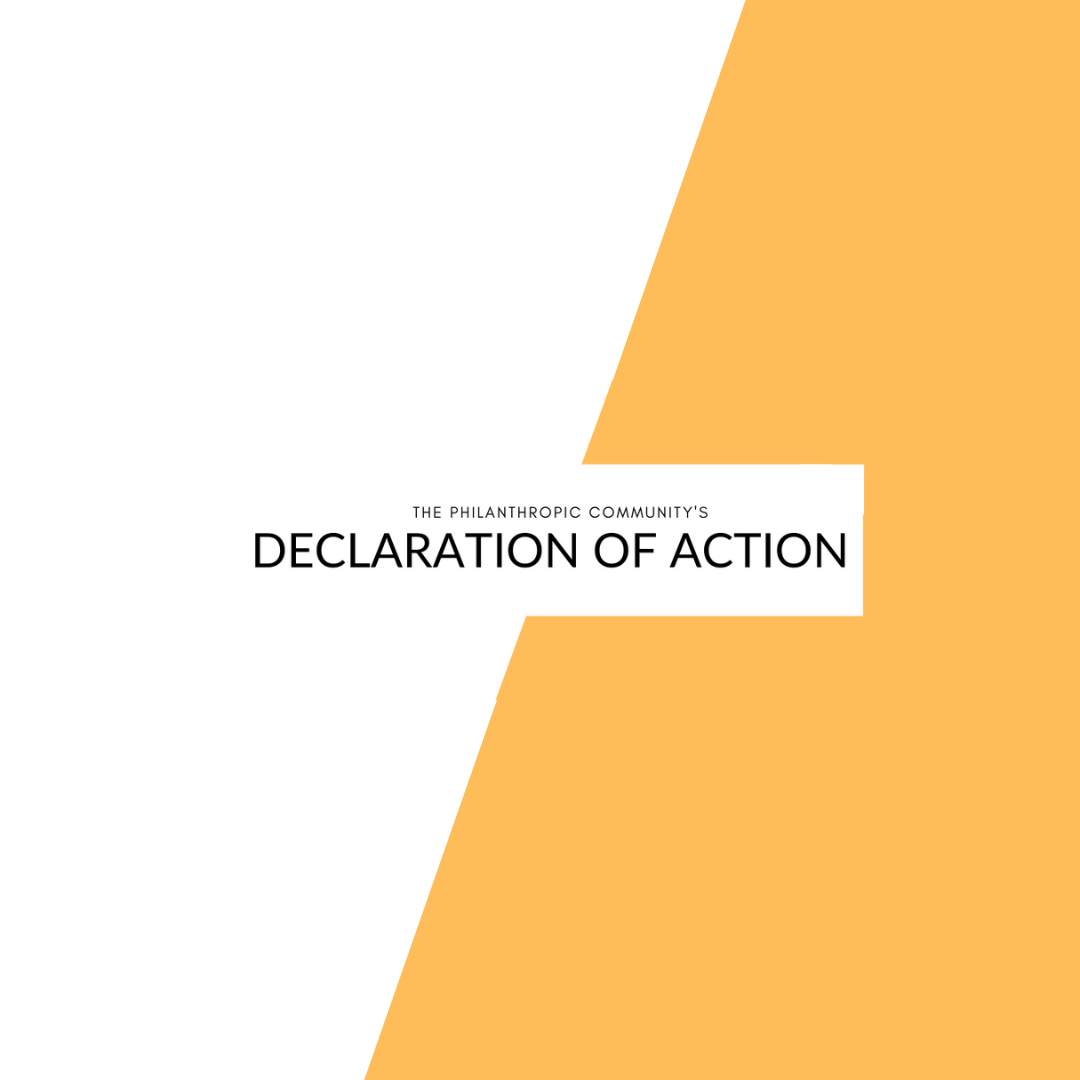 The Philanthropic Community’s Declaration of Action

Emily Carr University Foundation recently joined other philanthropic organizations in signing The Philanthropic Community’s Declaration of Action (The Declaration), committing to ensuring that positive action on reconciliation will continue.

The Declaration is a call to action inviting others to join in moving forward in an atmosphere of understanding, dignity and respect towards the shared goal of reconciliation.

Learn more about The Declaration here. 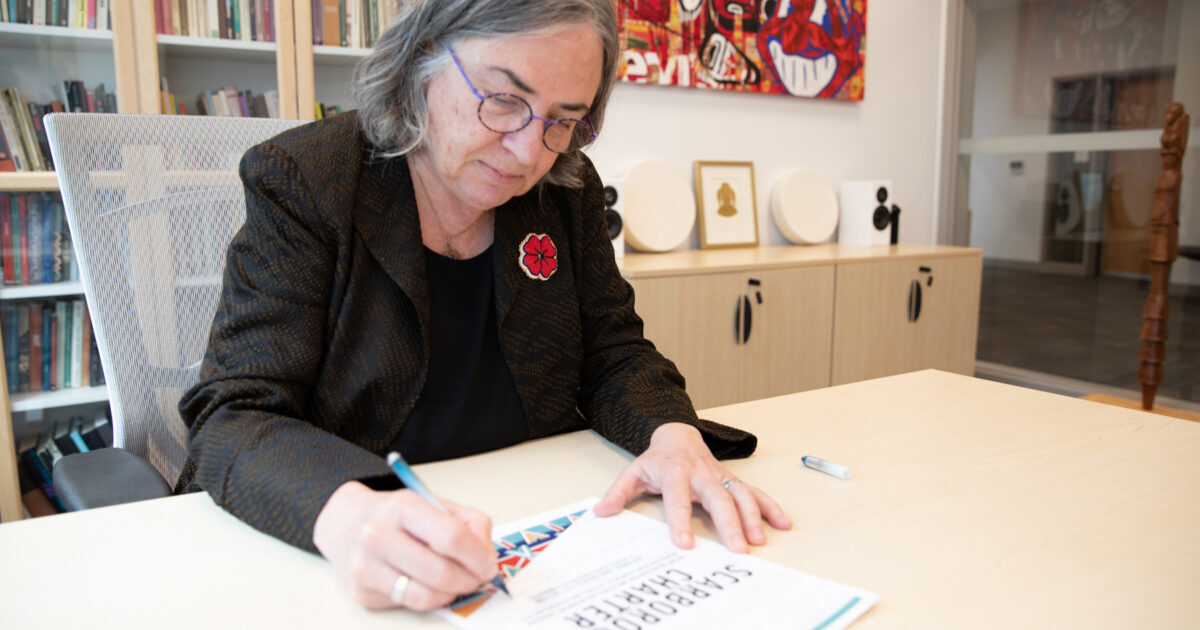 On Thursday, November 18, ECU joined 40 other Canadian universities in signing the Scarborough Charter and acknowledging our commitment to fostering an inclusive, anti-racist learning community. Read the full story here. 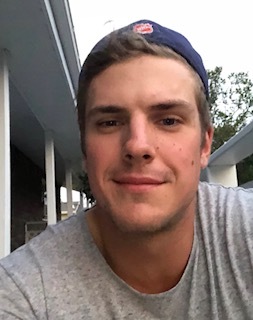 On October 25, 2021, the Lucas J. Croft Memorial Scholarship Fund was established just one day shy of what would have been Lucas’ 31st birthday. This scholarship will provide an annual $1,000 scholarship to a student who is also experiencing financial need.

Lucas embodied creativity through art and music; there was hardly a time Lucas wasn’t drawing or doodling, and on everything! His first love was graffiti, and his favourite medium was paint. Creating kept him grounded and was an intrinsic part of who he was.

Lucas also had a great sense of humour and an easy laugh. He was intelligent and unassuming, he enjoyed the simple things in life. His greatest joy was the birth of his daughter. Lucas’ family feel he would be honoured to help the recipients of this award achieve their educational goals. 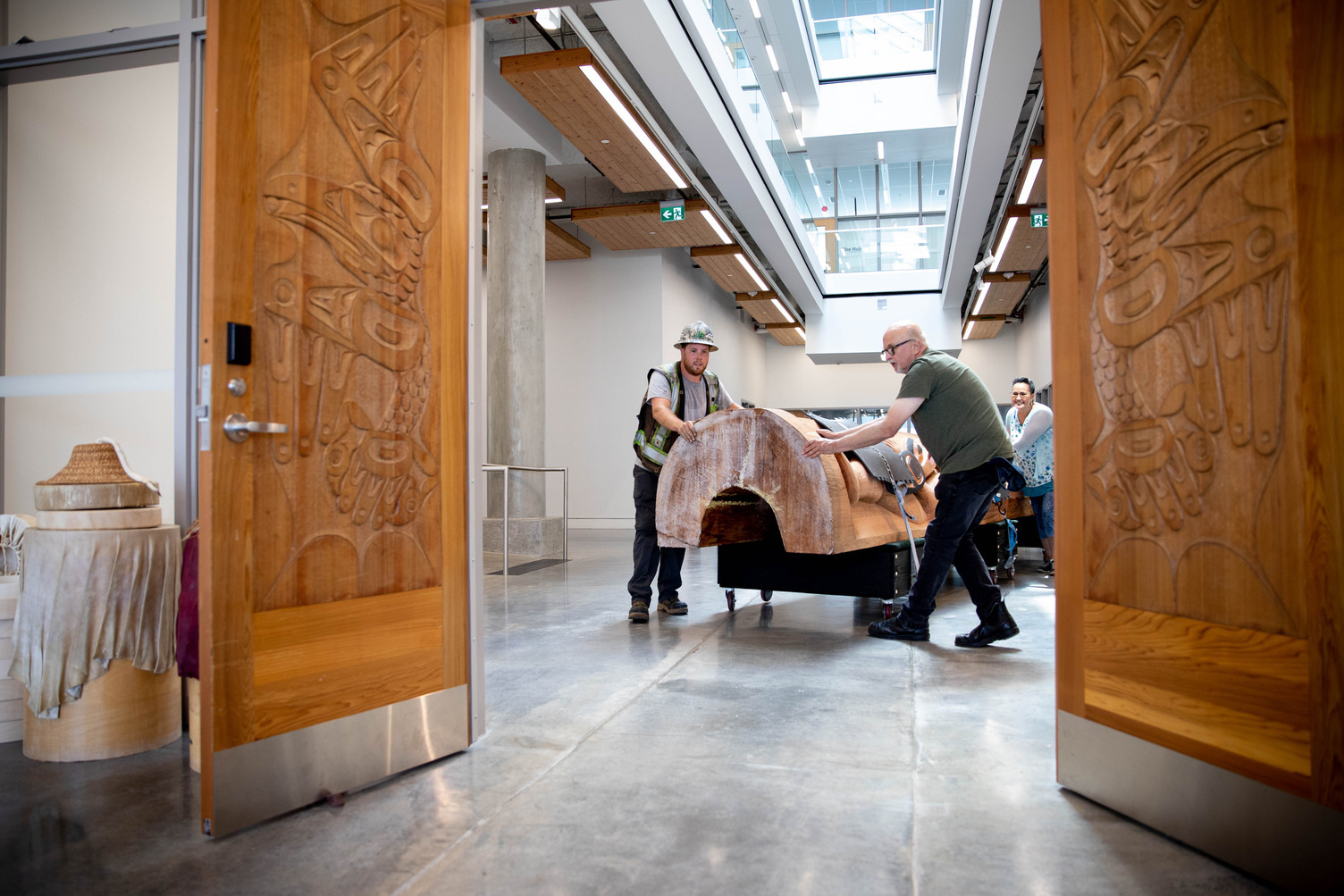 Totem Pole arrives at the AGP

In August, the Community Totem Pole Project | The Northern Wolves took a step closer to completion when it arrived at Emily Carr’s Aboriginal Gathering Place for completion. The majority of the totem pole was designed and carved by master carvers Dempsey Bob (Tahltan, Tlingit) and Stan Bevan (Tahltan, Tlingit) from Terrace. They will work with students to complete their portion of the totem pole in the upcoming months.

The mid-section of the pole was designed and will be finished by master carver, Lyonel Grant (Māori). He will complete his portion when travel from New Zealand is allowed. The totem pole will be the first to combine the design and carving practices of the Tahltan, Tinglit and Maori people into one totem pole. This one-of-a-kind artistic and cultural creation will be unveiled in June 2022.

Thank you to the sponsors and supporters of this project: 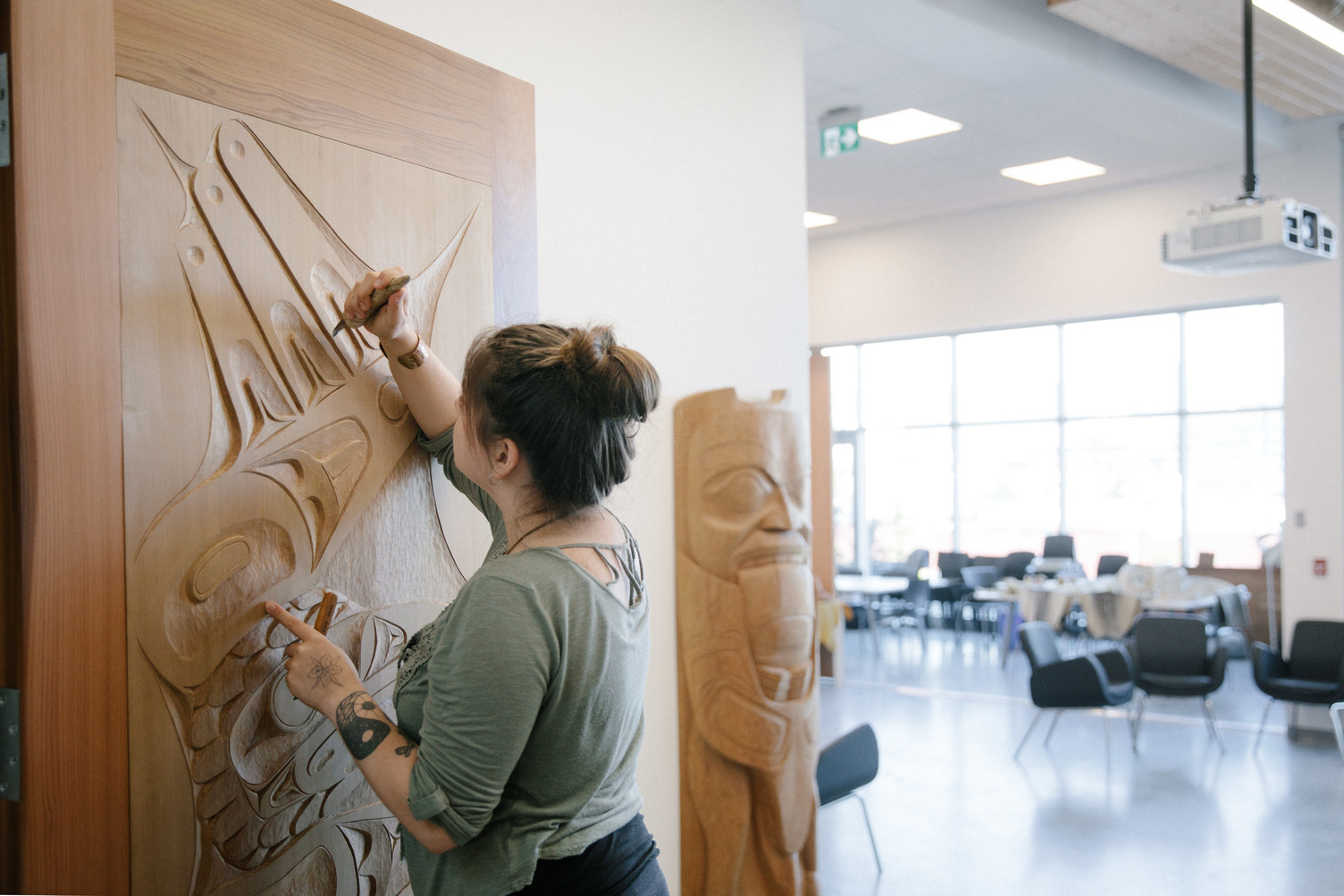 In light of the disturbing and painful legacy of the residential school system in Canada, two businesses with roots in Vancouver recognized the need to support the reconciliation process. Separately, they concluded that they could do the most good by funding Indigenous students' education through ECU’s Aboriginal Awards Program.

Native Northwest CEO Larry Garfinkel has supported Indigenous artists through his company for over 38 years. Native Northwest celebrates Indigenous cultures while providing a venue built on a foundation of respect and authenticity for Indigenous artists to sell their art, apparel, accessories, and products for the home. Garfinkel is on the Board of Directors of the YVR Art Foundation, along with ECU’s Brenda Crabtree, Director, Aboriginal Programs + Special Advisor to The President on Indigenous Initiatives, and Connie Watts, Associate Director, Aboriginal Programs, so there was a natural affinity to support ECU.

In July, Larry Garfinkel established the Native Northwest Reconciliation Fund Aboriginal Awards at Emily Carr. Says Garfinkel, “The Native Northwest Reconciliation Fund is honoured to support Indigenous artists who play a critical role in their culture, their communities, and beyond. We want to support your creativity, your passion and your commitment, as this is an inspiration for all.”

Danica Imports is committed to corporate responsibility in their operational principles and philanthropic philosophy. Their philanthropic program gives back through local and global community involvement, while enabling employees to experience the satisfaction and reward that comes from volunteering.

Gary Benson, Vice President Operations + Human Resources, explains why Danica Imports created this new Aboriginal Award: “Spurred on by the horrendous residential schools’ history, we decided that the time had come to acknowledge that Reconciliation with the Indigenous people was urgently required.

“Besides the ubiquitous statement that Danica operates on unceded territory, we were looking for something more tangible - something that would make a difference in the life of an Indigenous person. So, given our company’s graphic and product design core competency, and the proximity of Emily Carr University, we found a natural fit that resulted in the creation of the Danica Imports Awards for Indigenous students enrolled in the Design Department.”

Both awards will be administered by Indigenous staff and faculty at ECU, which aligns with the university’s EDI principles of decolonization and self-determination. The Danica Imports Awards for Indigenous Students and Native Northwest Reconciliation Fund Aboriginal Awards will be awarded this fall.

Thank you for making this important gesture and contribute to our Indigenous students’ success.

When Shawn Larsen, a devoted mother of two, passed away in May 2018, her family and friends knew they wanted to pay tribute to her by helping other creative individuals. Together, they undertook grassroots fundraising activities with the goal of creating a bursary at Emily Carr, where Shawn received her BFA in 2006.

Last fall, the goal was accomplished when Shawn’s mother, Laura Boyd, signed the agreement to establish the Shawn Larsen Memorial Award. The award will provide annual bursary funding for Aboriginal students. Shawn walked this earth with grace, humour, beauty, and creativity and deeply touched those privileged enough to share her journey. It is her family’s hope that Shawn’s legacy will be passed on through this award. 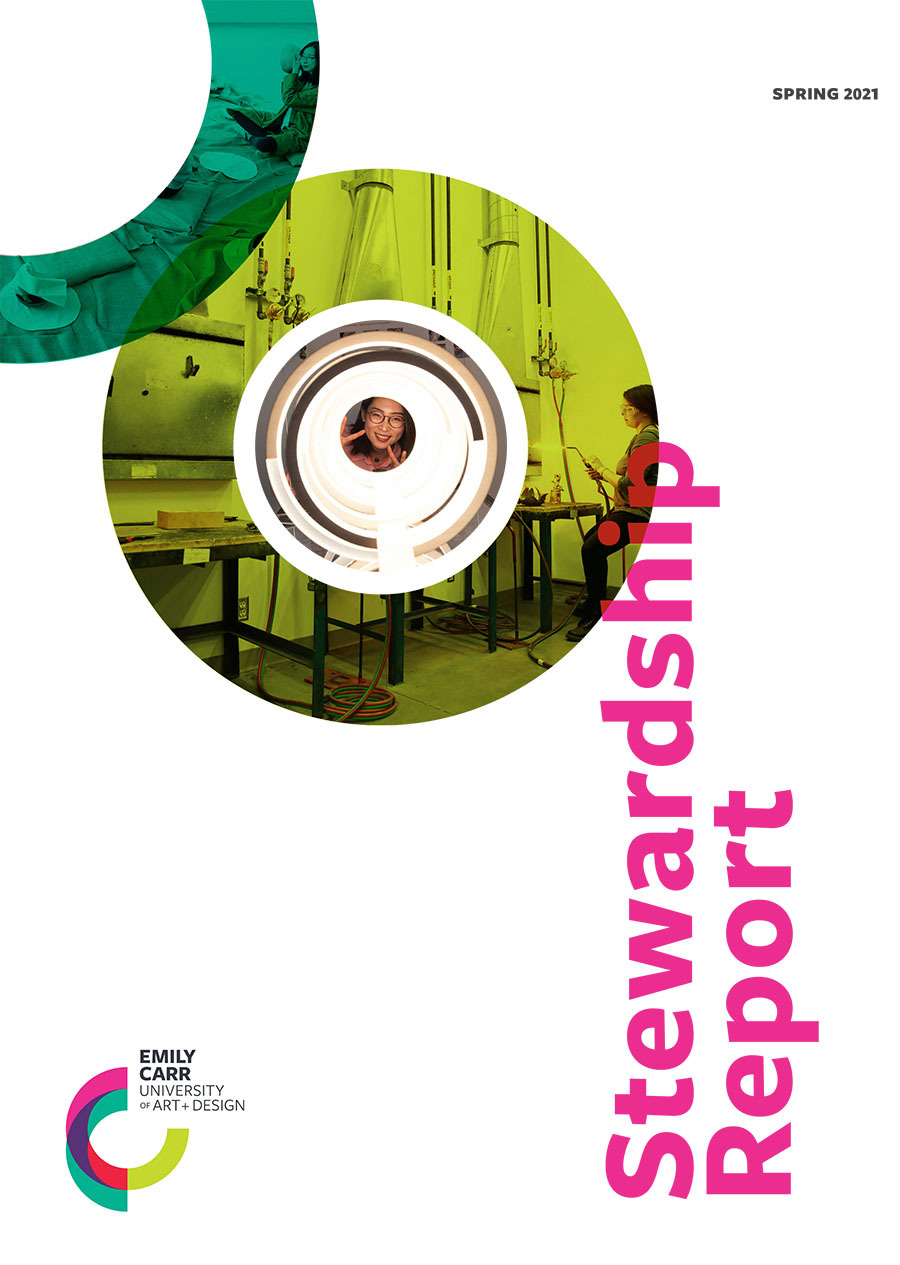 We are proud to introduce the new Emily Carr University Stewardship Report. In this first edition, you will read about new community members, student and faculty achievements, and get caught up with news you may have missed over the past months, as well as an overview by our President and Vice-Chancellor, Dr. Gillian Siddall.

There have been many changes and so many reasons for us to celebrate despite the pandemic, and we want to share some of the wonderful news and accomplishments of our Emily Carr University community over the past year.