A totem pole more than 25 feet tall was delivered in dramatic fashion to the Aboriginal Gathering Place (AGP) at Emily Carr University this summer.

Upon arriving at ECU, it was uncrated while still aboard the truck, and then craned up to the outdoor area on the second floor of the university.

“It was exciting, but also so much tension,” Connie Watts, associate director of Aboriginal Programs at ECU, says. “Like, real tension. So much work went into the pole — to see it just hanging there, suspended, and it’s just so massive …” 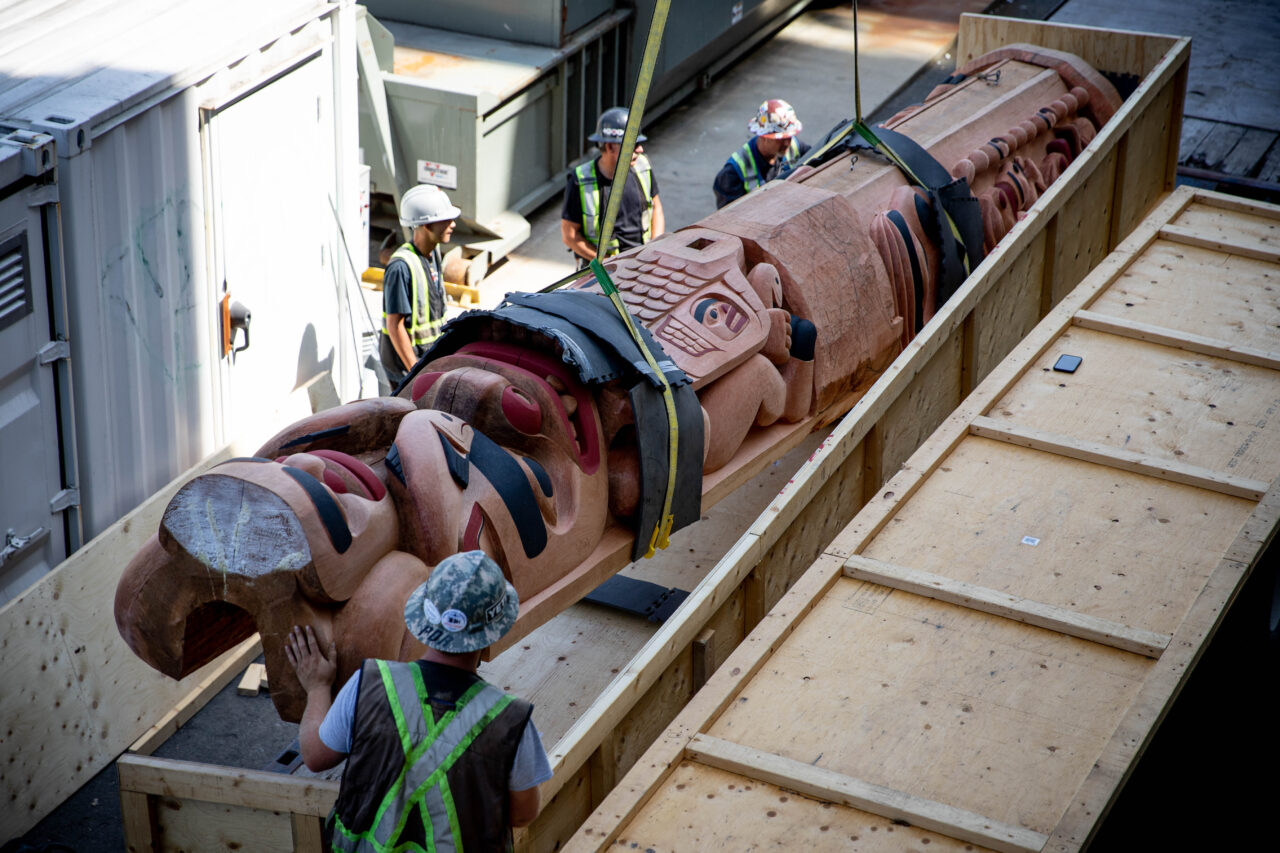 The totem pole is raised, inch-by-inch, from the crate in which it made its journey from BC's north. (Photo by Perrin Grauer / Emily Carr University)

Fortunately, she adds, the crew headed by Sarah Hancock was “amazing,” and executed a flawless placement of the pole onto a series of dollies built by designer Patrick Christie (BDes 2011). Connie, Patrick and other ECU community members then joined Sarah’s crew in wheeling the massive pole through the school and into the AGP, where it has remained under cover pending the next — and final — phase of carving.

But covering the pole has a practical function as well, Connie notes; beneath the cloth is a plastic drape which prevents too much moisture from escaping the wood too quickly — a situation which can lead to cracking. 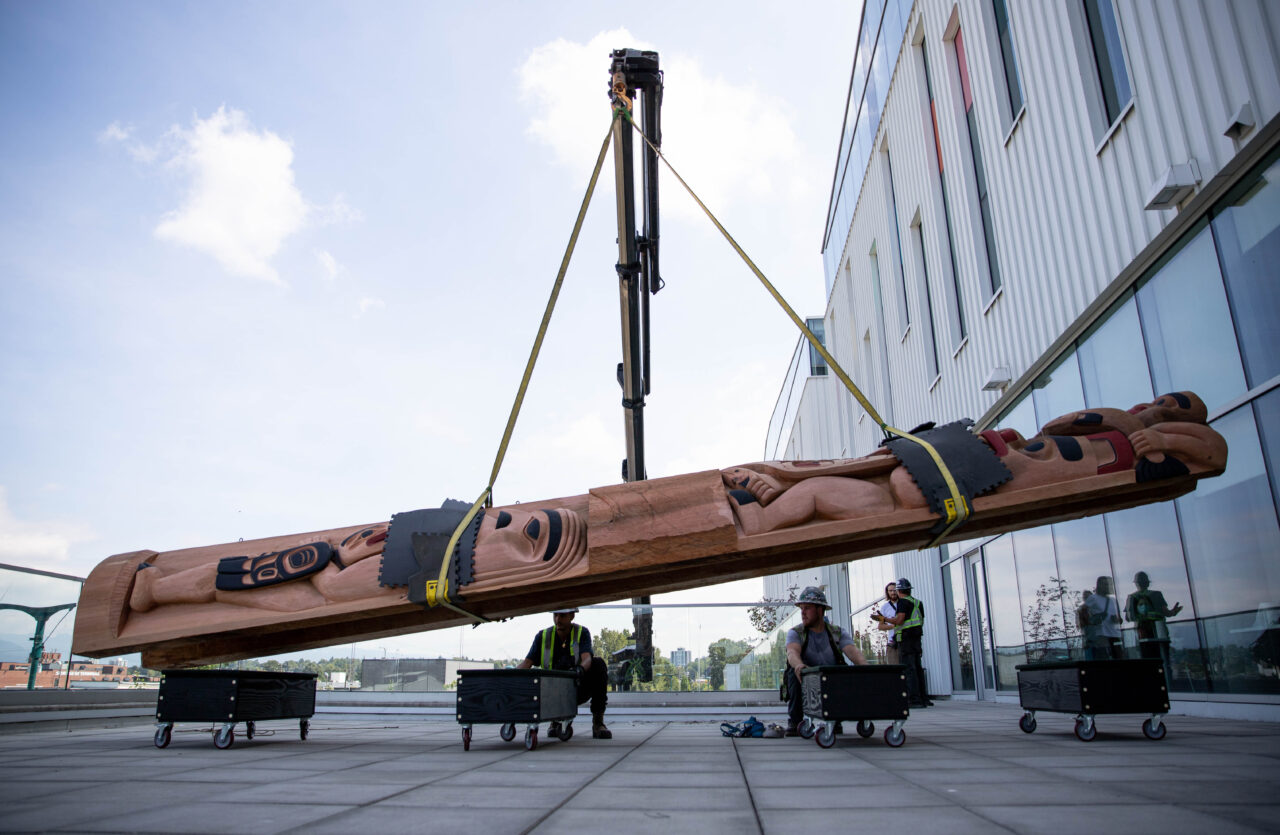 The pole is lowered onto a series of custom dollies, designed and built by designer and ECU alum Patrick Christie. (Photo by Perrin Grauer / Emily Carr University)

The arrival of Northern Wolves at the AGP is the latest phase in the Community Totem Pole Project, an AGP initiative that will bring Dempsey and Stan into collaboration with Māori carver Lyonel Grant this summer. While much of the pole was carved and painted prior to its arrival at the AGP, the middle three feet have been left untouched. This middle section will be finished by Lyonel when he travels to ECU in the summer.

“The Māori’s culture is so similar to ours, with their weavers, carvers, dancers, singers, longhouses and canoe culture,” Dempsey says in a statement.

The pole, which tells the migration story of the wolves, eagles and grizzly bears, “exemplifies the cultural relevance of movement, migration, exploration and our connection to our land,” according to the artist statement by Dempsey Bob. The movement of the figures points to this southward migration, with the eagle and wolf heads protruding downward, “out of the traditional totem pole into a sculptural expression. The deeper carvings, the projected figures and the flowing hair make this work come to life.” 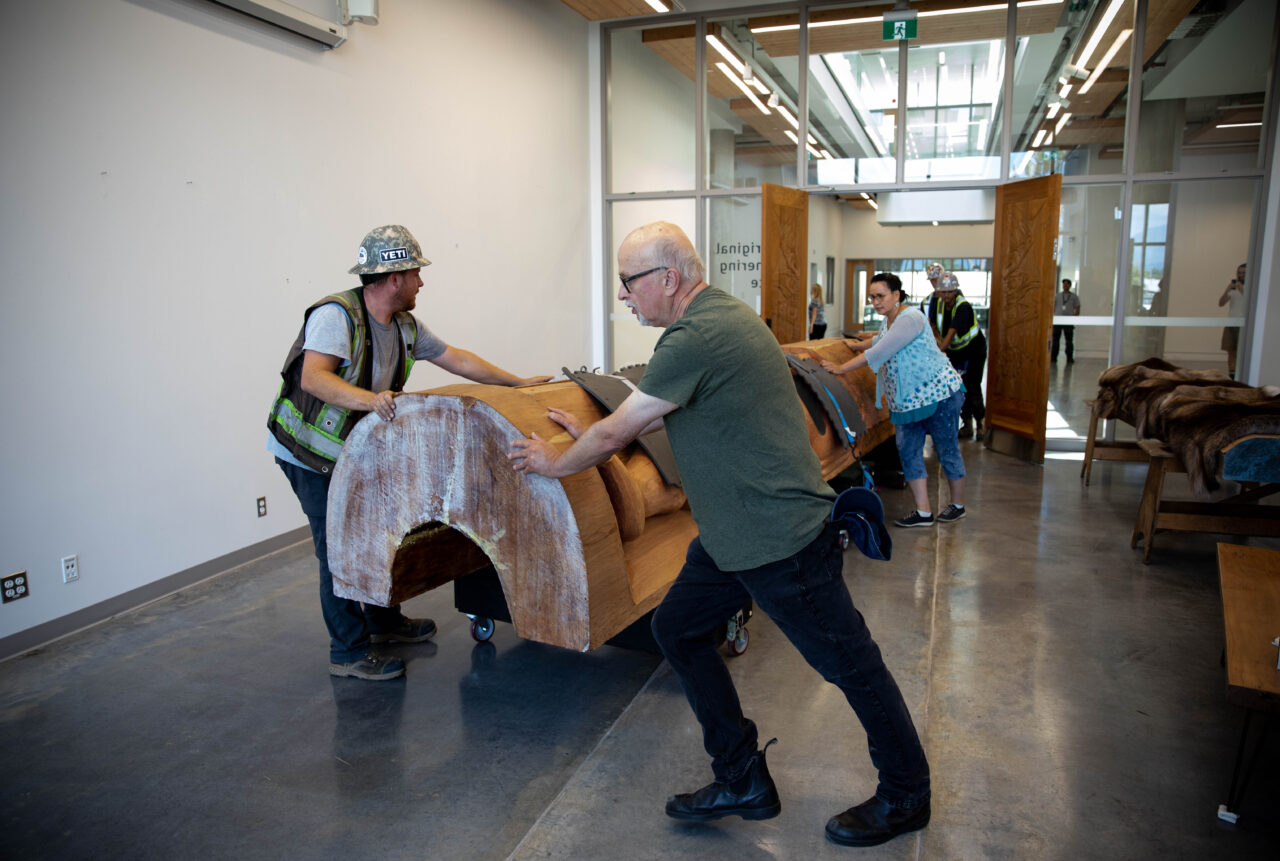 Artist, designer and associate director of Aboriginal Programs Connie Watts and artist and ECU alum Lawrence Lowe work with the crew to push the massive pole through ECU to the Aboriginal Gathering Place. (Photo by Perrin Grauer / Emily Carr University)

A free handout detailing the vision behind the pole is available to the public at the AGP.

Scroll down to see more pictures from the arrival of the pole at ECU.

Visit the Aboriginal Gathering Place online now to learn more about its extraordinary range of programming and resources. 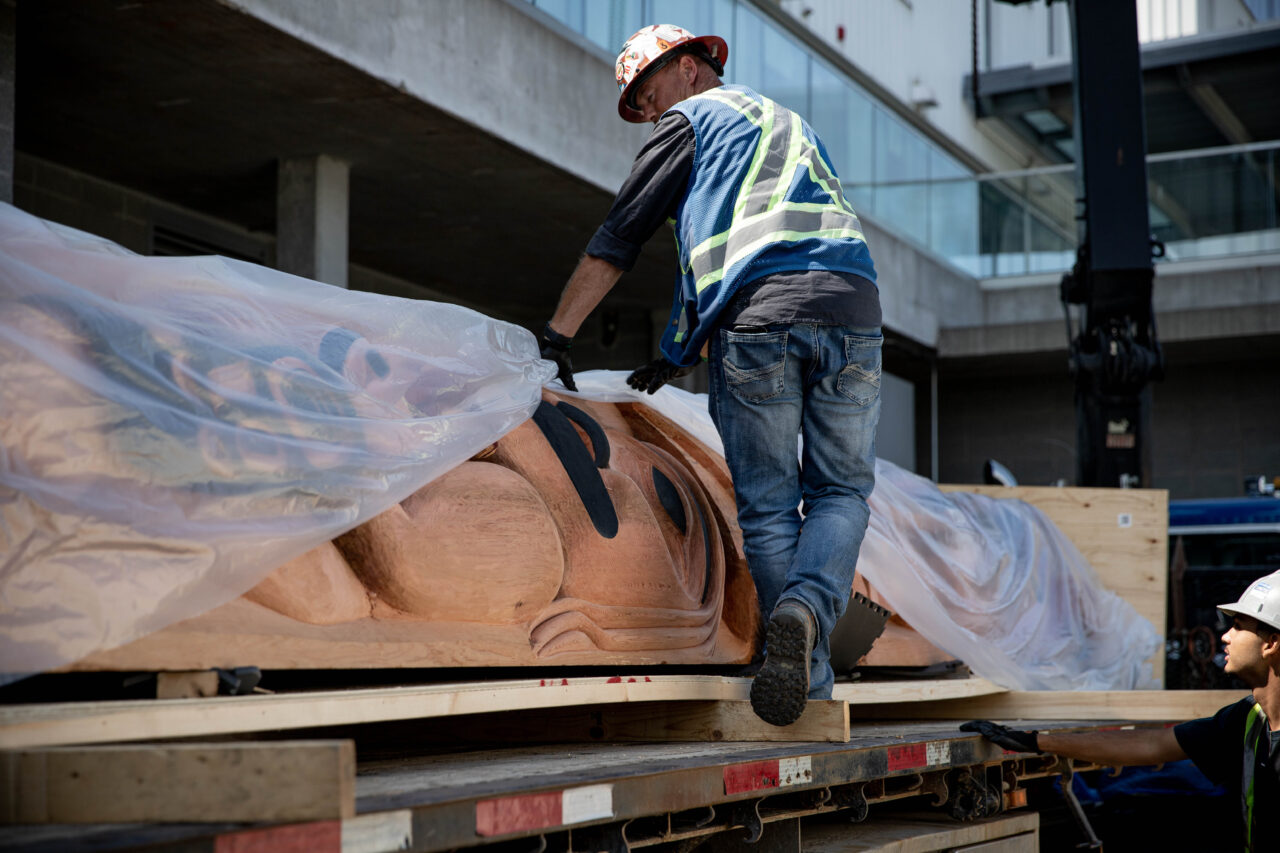 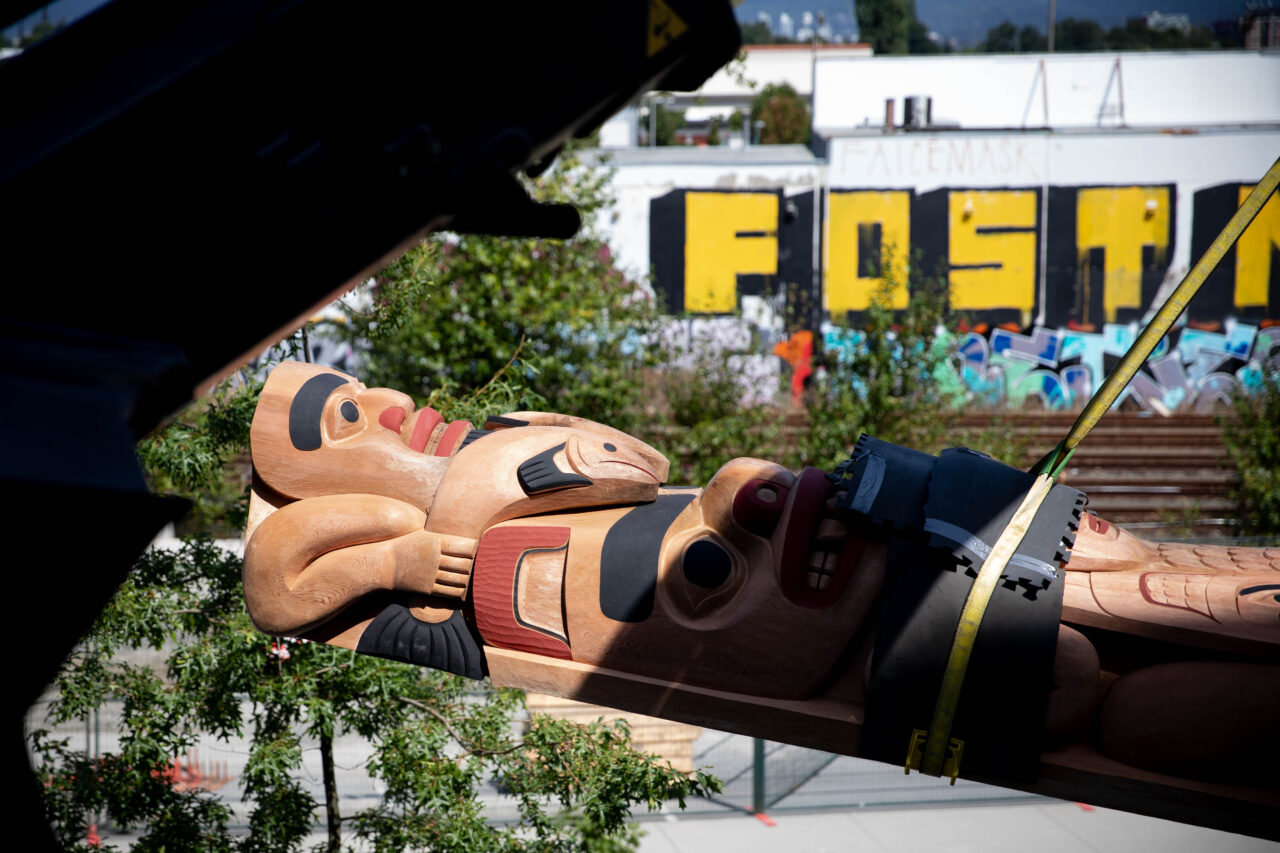 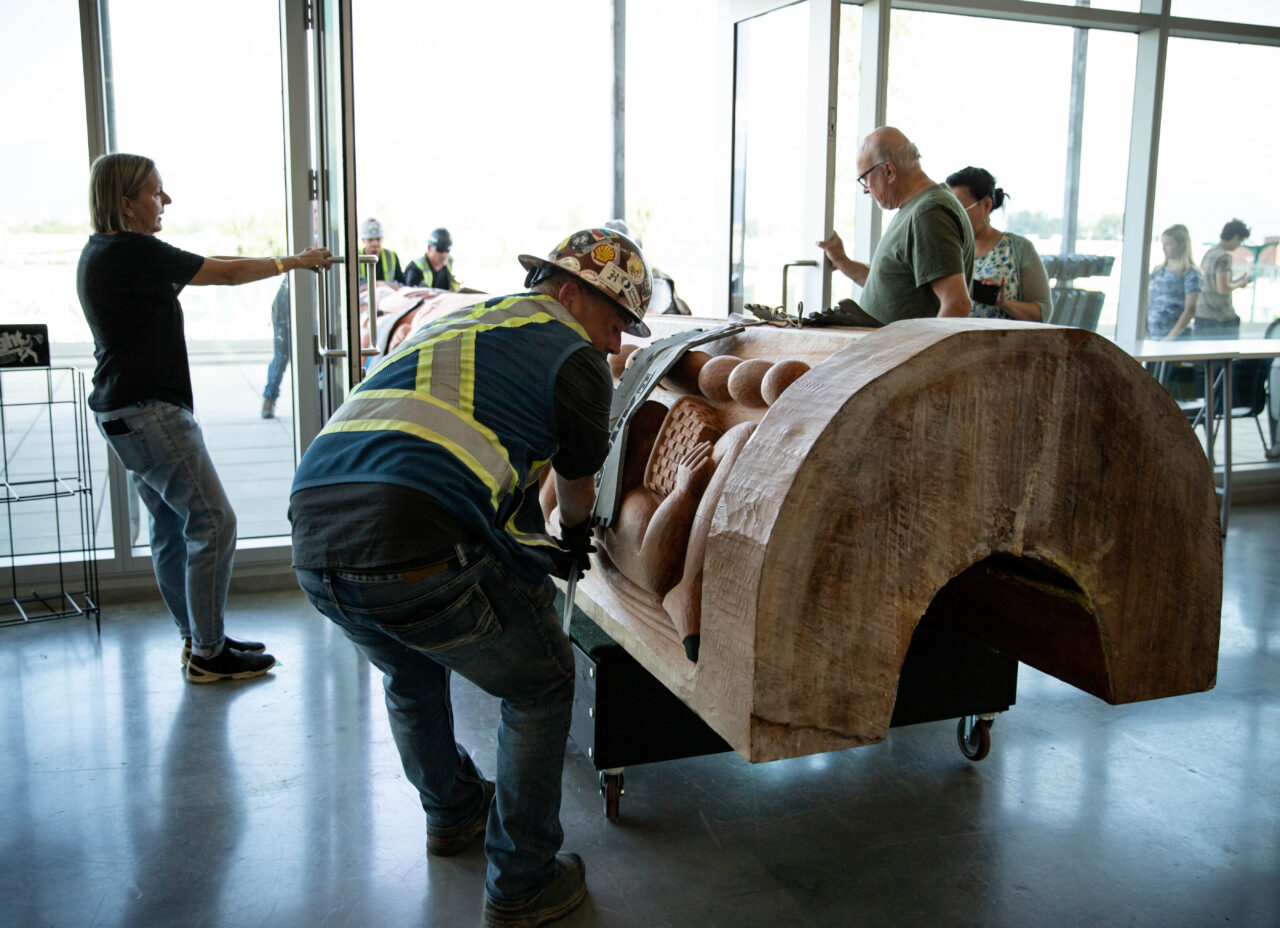 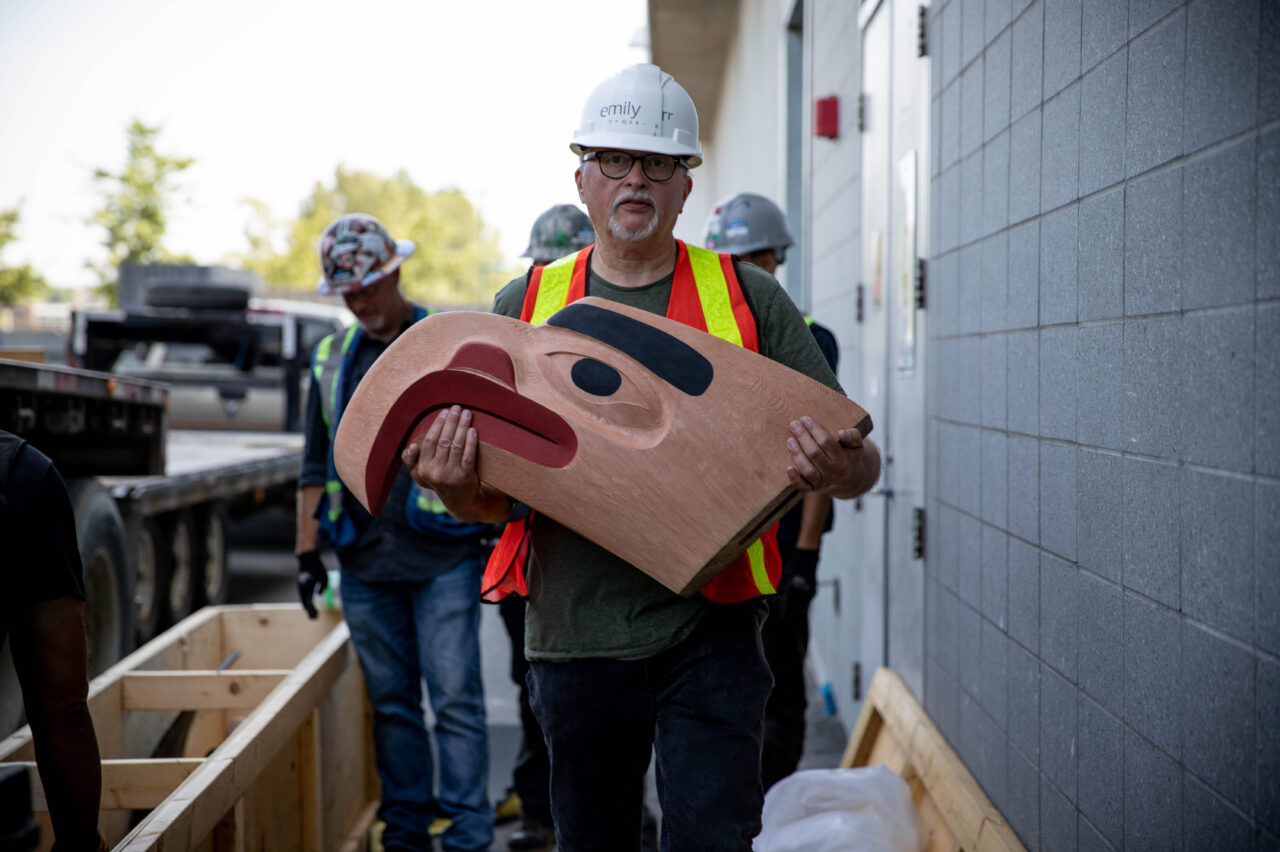 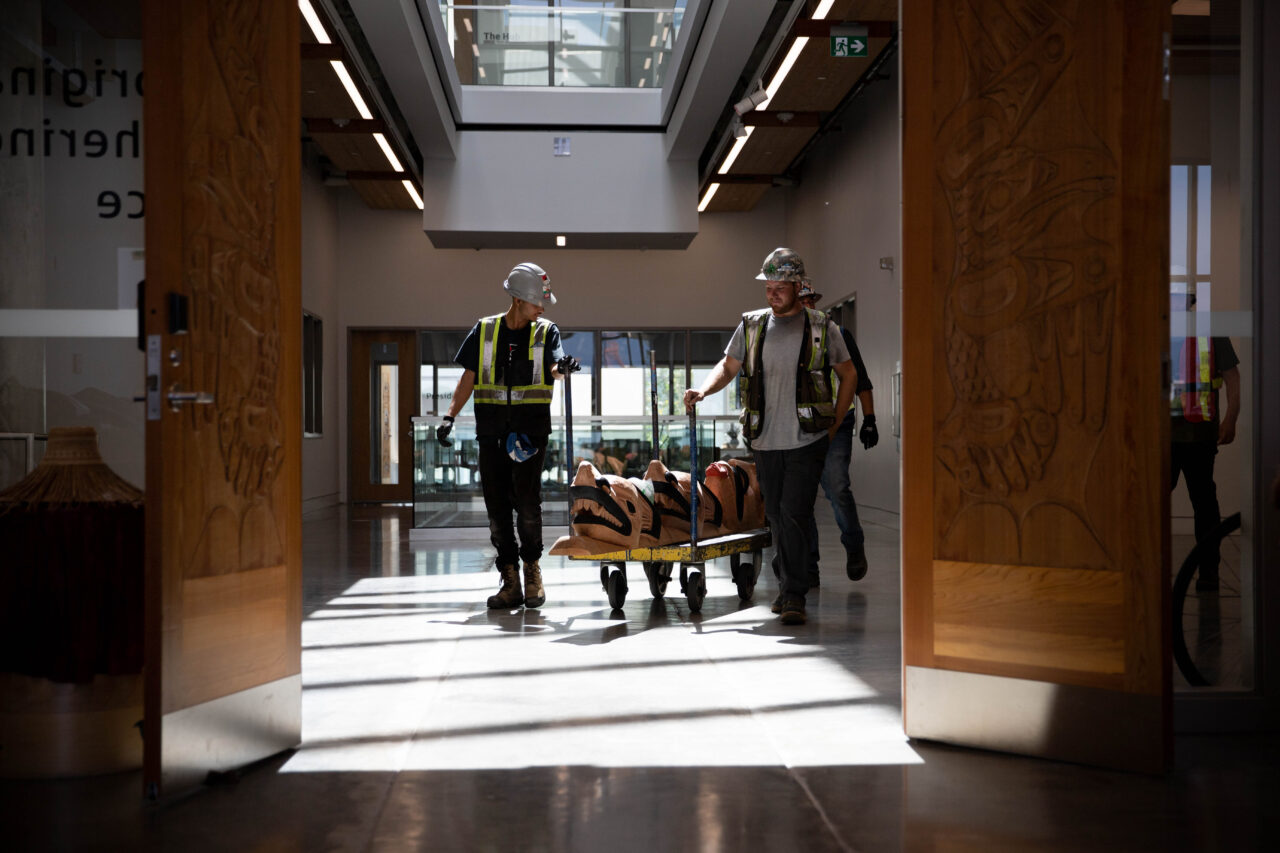 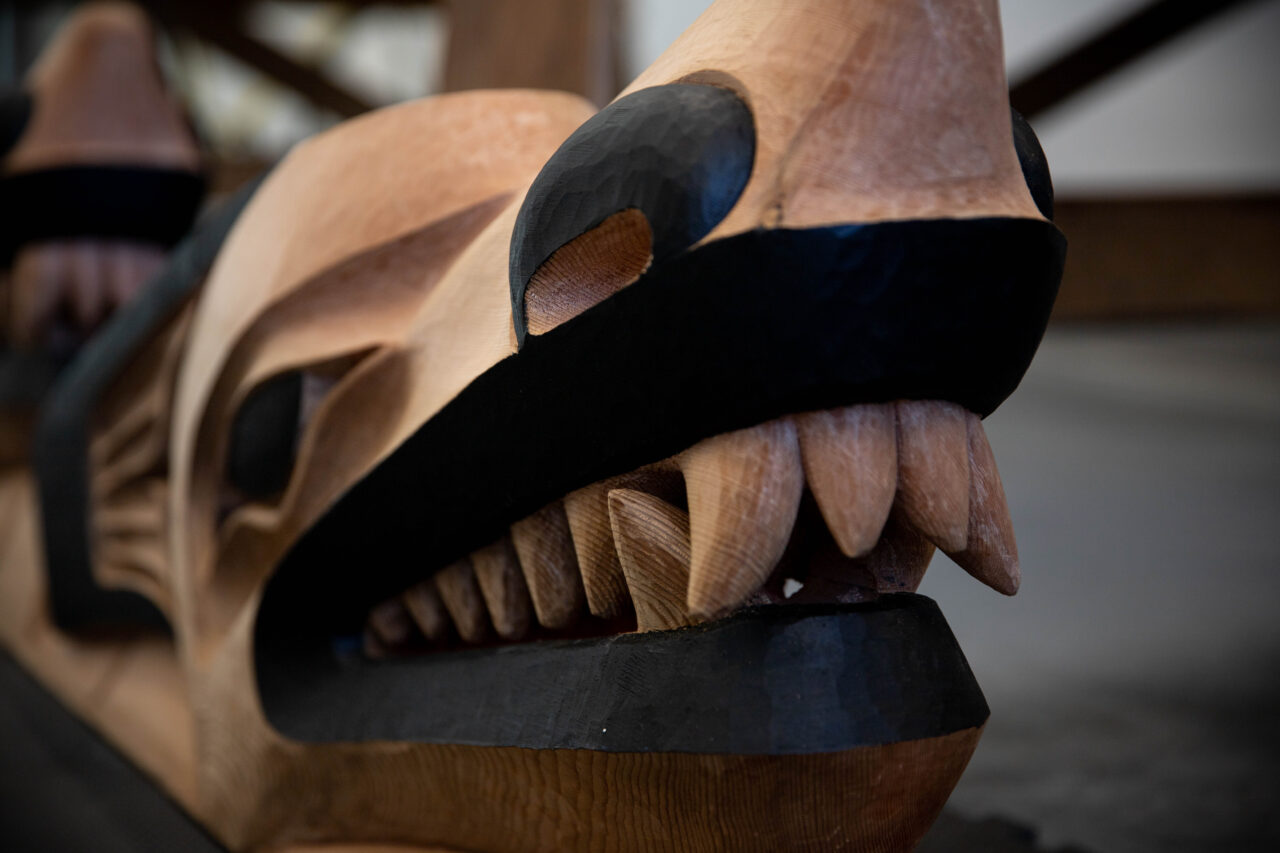 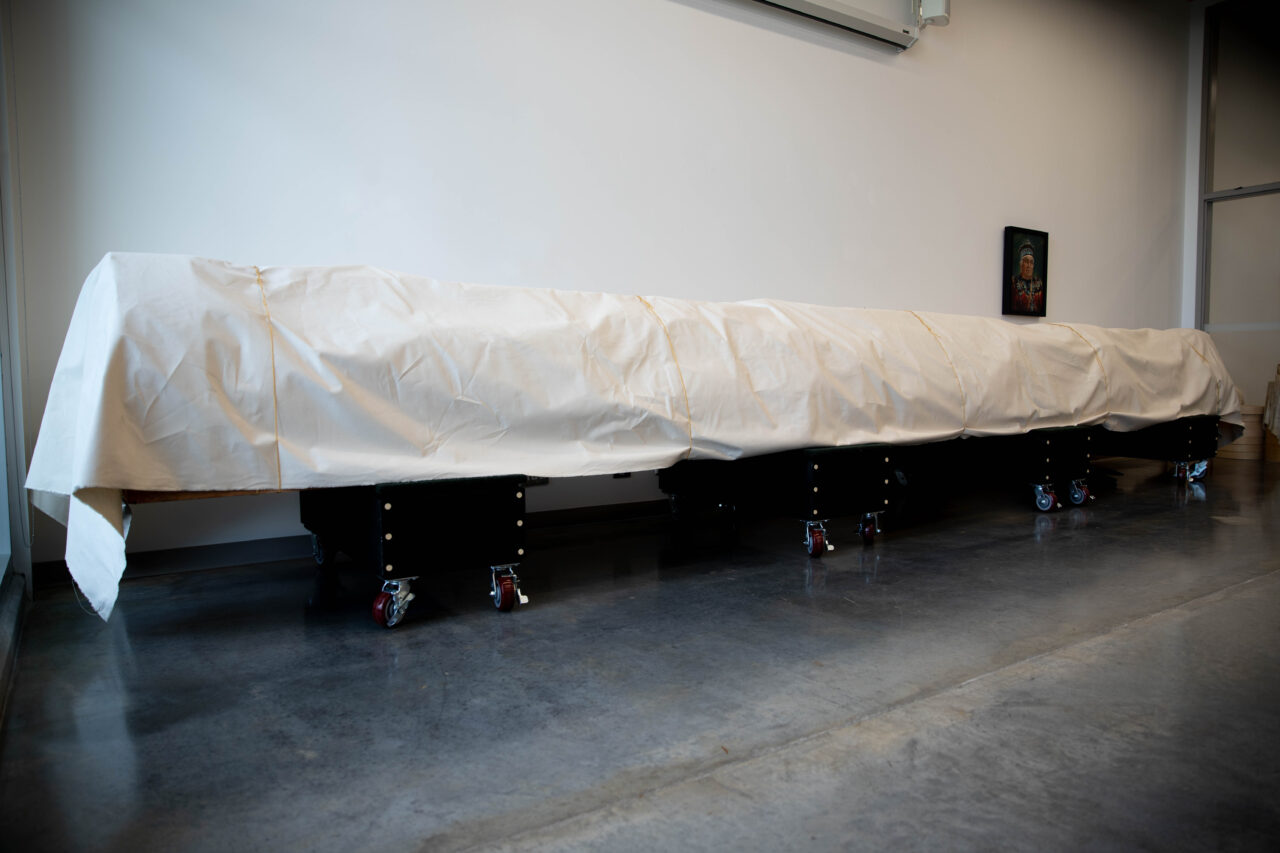