Please join us at Libby Leshgold Gallery and READ Books for the launch of the first three books to be awarded the Scorpion and Felix book prize.

The prize has been awarded to Back Door Please!: 120 Hours on the Number 20 Bus by Tracey Vath which is a subjective and sometimes personal documentation of prolonged trips on a crowded east-side bus route, combining drawings and journal entries to create a narrative which retain a pleasing level of indeterminacy.

Honourable mentions were awarded to Scott Elliot, an Irish artist currently based in Norway, and Vancouver-based artist team of Alina Senchenko (2015) and Bára Hladíková. A third Honourable Mention was awarded to Stacey Ho and Elisa Ferrari (2013) for a publication project to be released at a later date.

Scott Elliott’s artists’ novel, The El Dorado Commission, creates narratives and meta-narratives around a story of a researcher looking into the origins of a painting, and beyond to the fountain of youth the painting depicts.

Alina Senchenko and Bára Hladíková have created a collection of images, documents, and writings titled Behind the Curtain, exploring the still-unknown histories of everyday life within the East Bloc before the fall of Soviet communism, through the eye of two women who are part of an East European diaspora in North America.

Dan Starling’s work plays with the conventions of narrative through intervention, extrapolation, reinterpretation and reconfiguration. His work deals with how aesthetic forms frame the narratives that influence how we see ourselves individually and collectively to produce exciting juxtapositions that encourage critical engagement. Starling studied at Emily Carr University of Art + Design (2005) and Städelschule, Frankfurt. He has exhibited his work internationally.

Libby Leshgold Gallery and READ Books acknowledge that this event is located on the unceded territory of the Coast Salish Peoples, including the territories of the xʷməθkwəy̓əm (Musqueam), Skwxwú7mesh (Squamish), Stó:lō and Səl̓ílwətaʔ/Selilwitulh (Tsleil-Waututh) Nations.

About the Scorpion and Felix Prize

The Scorpion and Felix Prize is named after an unpublished comic novel written by Karl Marx in 1837 when he was 19 years old. One artist is selected who will work with the support of Publication Studio Vancouver to realize an individual artist book project. Submissions are open to all emerging artists who have demonstrated an interest in publication as an artistic practice through their work. Preference is given to artists who are willing to experiment with the book as a medium while keeping the conceptual and practical frameworks of Publication Studio in mind. Publication Studio assists the artist with the logistical considerations for production, including questions around paper stock, printing process and binding, and ensure the completion of the project within budget. In addition to the production of the book, Publication Studio is committed to offering organizational support for the project beyond the publication date. Publication Studio Vancouver is happy to be partnering with artist Dan Starling on The Scorpion and Felix Prize and series. 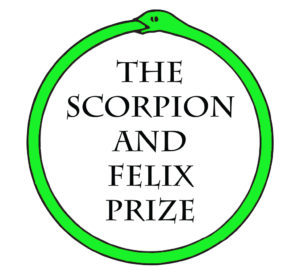