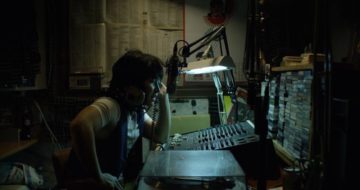 Written, directed, edited and produced by Le Lam, The Blue Jet screened at Festival Du Nouveau Cinéma 2015 and won the Emily Carr University President's Media Arts Award for Best in Live Action Film this past May. Le Lam has been named one of the Top 15 People to Watch from the Whistler Film Festival by This is a Spoon Studios Ltd.

Read their review below and be sure to catch the trailer after the jump.

This film rocks. Yes, it won the best student film at the festival but I still feel like it needs to be recognized more. The story is about a rebellious radio DJ who had the b*lls to play forbidden rock n’ roll in 1970’s Taiwan. It’s sort of like Pirate Radio but awesome for completely different reasons. This is the best film I’ve seen come out of Emily Carr and it has converted me to a big Lawrence Lam fan. In a culture where we tend to continuously draw attention to the lack of female representation in film it’s important to note that Asian representation in film is horribly underrepresented in North America. To know that some of my best friends didn’t have people on screen they could identify with saddens me, and I hope Lawrence will become one of the leaders in the next generation of Asian filmmakers. He is a perfectionist filmmaker that I am proud that I got to meet him before he makes it big.