Enjoy a celebratory walk through 90 years of our history, compliments of our Library, and Librarian Danuta Zwierciadlowski

As the Electronic Resources + Journals Librarian, Danuta's assembly of visual items inspired this digital journey that marks today's milestone and our schedule of community celebrations in honour of our 90th anniversary.

In addition to the following images, the Library's recent and monumental project to preserve our history through the creation of a digital archive of all our academic calendars, from 1925 to present day, adds annual viewbooks to your visual tour for a compelling and comprehensive look back. Visit the Library to enjoy all of our digital archives that include a repository of our Academic Calendars and even more archival materials documenting our institution's history and evolution, as well as our contribution to the local and global art, design and cultural scenes since our inception.

This photo was published in a newspaper with the following information which, although missing a few words, is that much more interesting. Recognize any names? We'd like to hear from you. 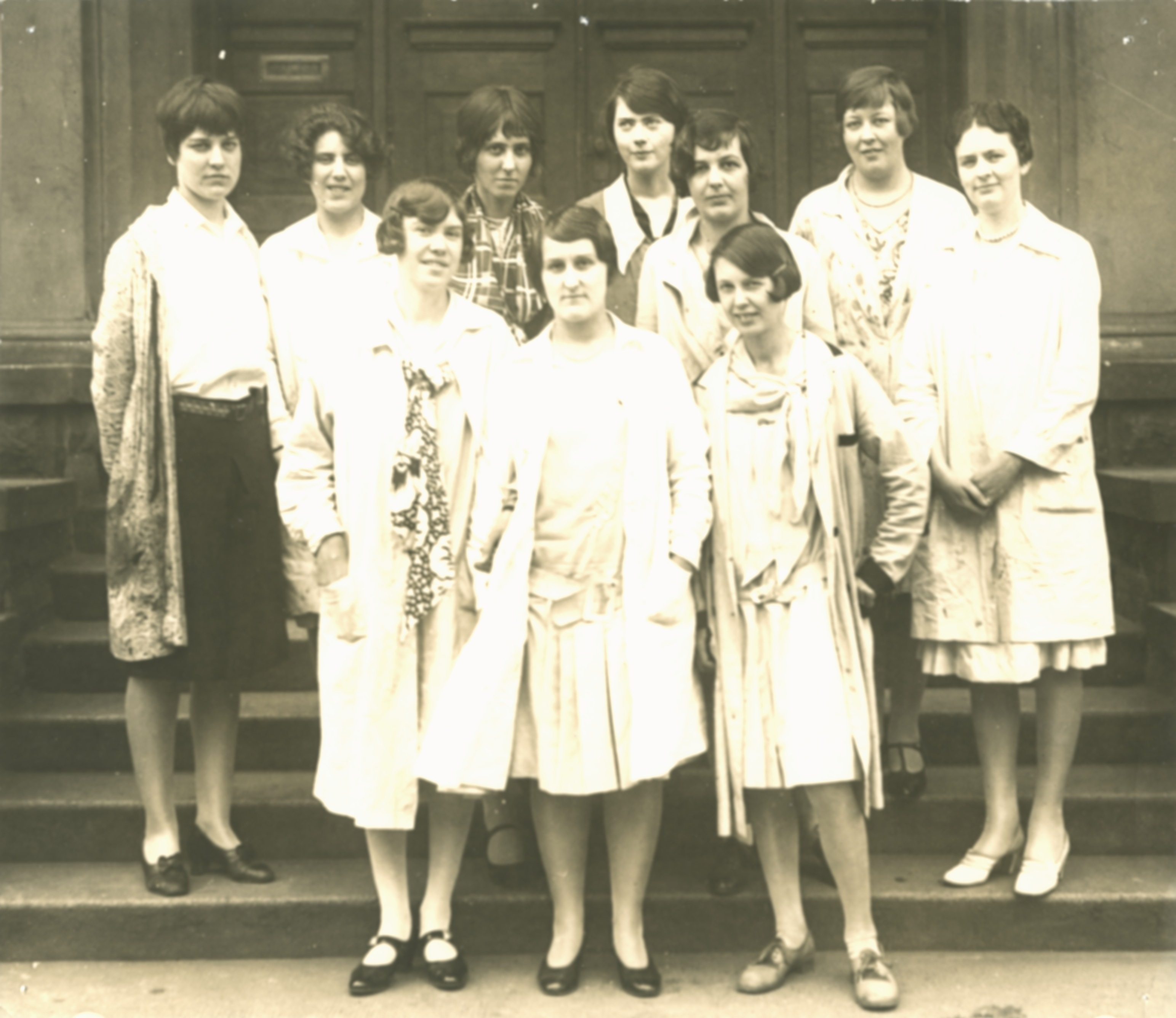 "These ten young women were the prize winners at the Vancouver School of Decorative and Applied Arts. From left to Right, they are: Front row – Miss Irene Hoffer, Miss Laura Wil-______, Miss Ione Macdonald. Back row – Miss Sybil Hill, Miss Ada Currie, Miss Betty Weston, Miss Vera Weatherbie, Miss _______ Sharp, Miss Lilias Farley and Miss Frances Gatewood. Their work, along with that of other students, is on exhibition daily from 10 am to 9 pm, in the School Board Building this week." 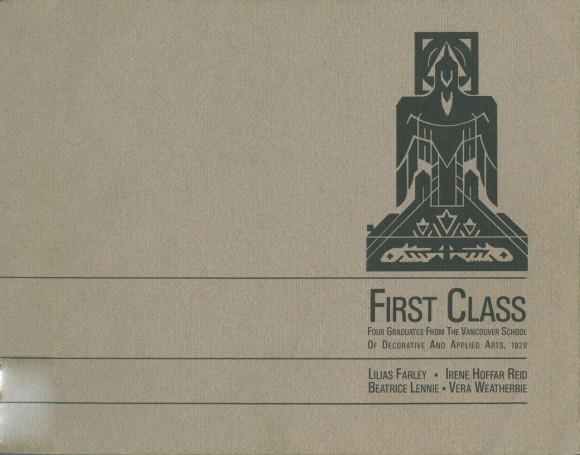 First Class - Four Graduates from the Vancouver School of Decorative and Applied Arts, 1929

Their first year classes were routine as they learned basic drawing and modelling from antique and life forms. While in Europe, Charles Scott had bought teaching models in anticipation of the School's opening. However, the first year was also transitional. Classrooms had to be set up and equipment such as easels and sculpture tools purchased. By mid year, it became obvious that students needed ready access to art supplies and Scott hired a capable student, Vito Cianci, to organize a store on VSDAA premises. More instructors had to be hired. Even the student population did not stabilize. From a total of eighty-one day and night time students who started in 1925, only eleven graduated with a diploma . Some left for financial reasons and some, like Cianci, who had a teaching certificate from the Normal School, stayed on but acquired jobs before graduation." However by the end of the first school year the students had created structures which were the basis of student activities for future years. They had formed an association, held regular meetings, organized socials and sketch trips and planned the first Paintbox, the student annual. The originalPaintbox and others which followed published student work, including poems and short stories, information about classes and reviews of art exhibitions. Instructors invariably wrote columns and there was a "Who's Who" describing the activities of outstanding students The first year concluded with an obvious "esprit de corps."

The next year was the beginning of an intense period of work and excitement for the students. Two new instructors, Frederick H Varley from the Ontario College of Art, Toronto, and J. W. C. (Jock) Macdonald from the School of Art, Lincoln, England, were hired to teach drawing/painting and design/crafts respectively. Initially, Varley appeared to have the greatest impact on the VSDAA programme and on the students. He insisted on nude models for his drawing and painting classes. Not only was his teaching style different, but to the students he appeared to be the first "real artist" that they had experienced. His intensity, enthusiasm and energy for his work were transmitted to his students. For Varley, art was a total commitment. He did not separate his work from teaching or from social activities. He took students on sketching trips, encouraged them to rent studios which he visited and he spent evenings discussing art with them. Varley was a magnet to which students and art patrons were drawn.

Copies of this book may be available at the Vancouver Art Gallery.

In this image, the Vancouver School of Art Graduating Class of 1938 stands on the steps of the school. Charles H. Scott, after whom the Gallery at our Granville Island Campus is named, stands in the centre. 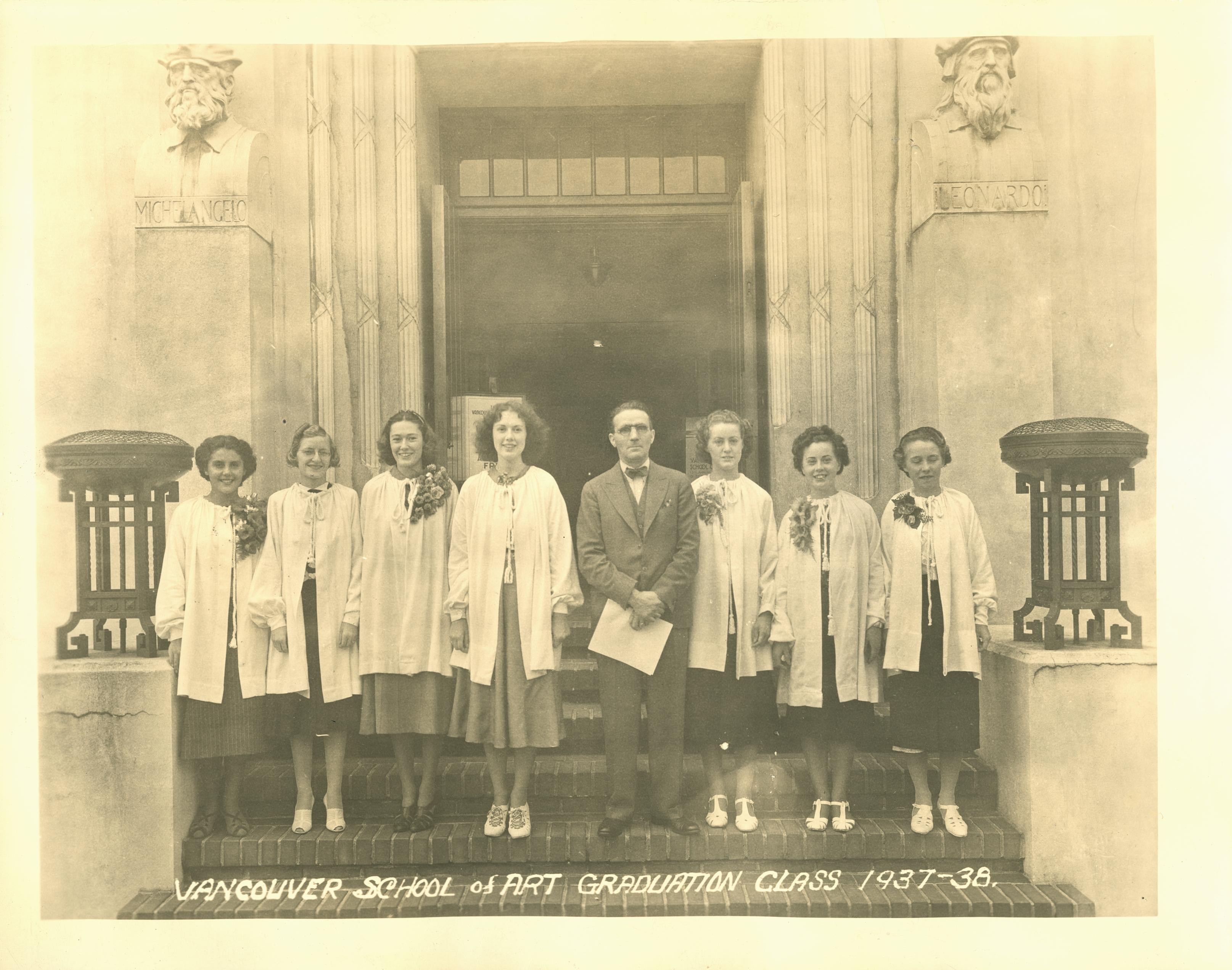 Charles Hepburn Scott graduated from the Glasgow School of Art in 1909 and worked in Scotland and Belgium prior to emigrating to Canada in 1912, finally settling in Vancouver in 1914. He made a significant contribution to the development of art in British Columbia in the first half of the twentieth century. Scott's belief in the importance of cultural consciousness for a city and its citizens inspired him to be a founding member of the B.C. Arts League in 1919. This group lobbied for the establishment of an art school and an art gallery for the city of Vancouver at a time when neither existed.

Due to the efforts of the B.C. Arts League, the Vancouver School of Decorative and Applied Art opened its doors in 1935. Scott served as the school's principal from 1926 to 1952 and was instrumental in establishing the school as one of the most vital in the country, attracting teachers such as Jock Macdonald and Fred Varley. In 1931 Scot travelled overseas with one of the founders of the new Vancouver Art Gallery, Henry A. Stone, to purchase the 113 works of art which would become the foundation of the Gallery's permanent collection. Later that year the Vancouver Art Gallery opened to the public. To Scott this was "an important step in the cultural history of the city" as well as "a dream come true."

Away from the demands on his time as an administrator and teacher, Scott used what little leisure time he had to paint and much of his work, such as the paintings Alfresco, Portrait of Melvin, and Morning Tea, depict the artist's home, garden and family in Vancouver. The B.C. landscape was also a favourite subject for Scott. Opportunities to sketch outdoor occured during the Vancouver School of Decorative and Applied Art's summer camps on Savary Island and the occasions when Scott joined Macdonald and Varley on sketching trips to Garibaldi.

In this image from the 1940's, students sharpen their drawing practice. Drawing is a program area of study, practice, and inquiry that is integral to many other disciplines at Emily Carr and our undergraduate degrees encourage the acquisition and exploration of drawing as a core skill.

In the 1950's, a photo from our classrooms, taken by the Visual Education Department of the Vancouver School Board (dated Feb 24, 1954), shows students in the classroom, life drawing. Of interest, a prize-winning documentary film-maker and graduate of Emily Carr was recently overheard in a yoga class saying that while she trained in Massage Therapy prior to pursuing Film, Video + Integrated Media at Emily Carr, the knowledge she gained through rigorous training in anatomical drawing during her degree in visual arts gave her equally, if not more, knowledge and understanding of the human body's anatomy. 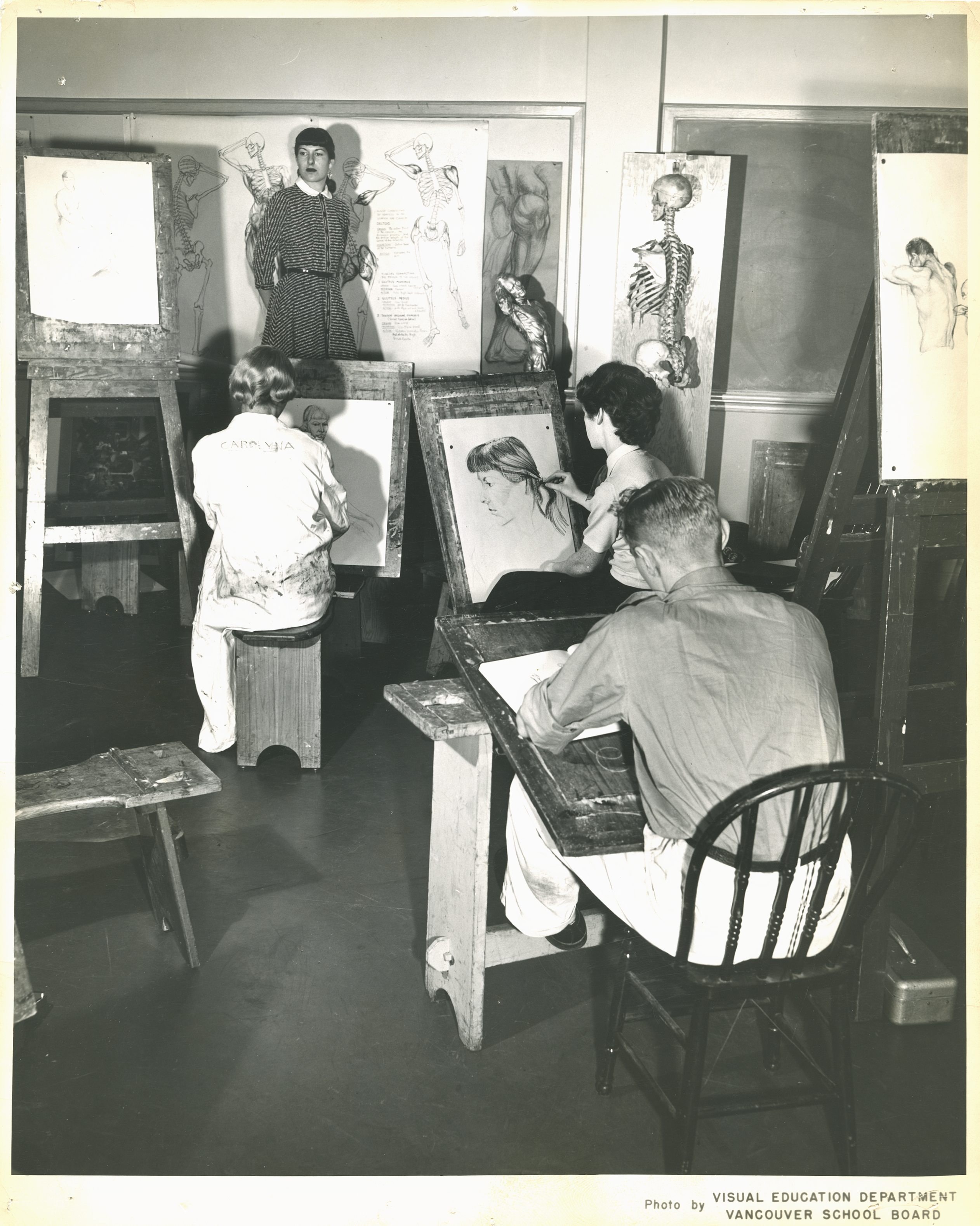 The female student at the left is identified as Irene Whittome who studied at our school during the '60's as did Odette Venuti about whom we wrote an article in our university newsletter. Learn about Odette's experiences at our school during this timeframe, as well as her current art practice, in that article on our CONNECT archives.

Fashionable students in the 1970's assist their instructor, Ian Wallace, with his slide collection, new media in those days. Last year we were fortunate to host Ian Wallace at our Annual Alumni Reunion Weekend, THE COMEBACK. Enjoy a recording of the evening's speakers below! 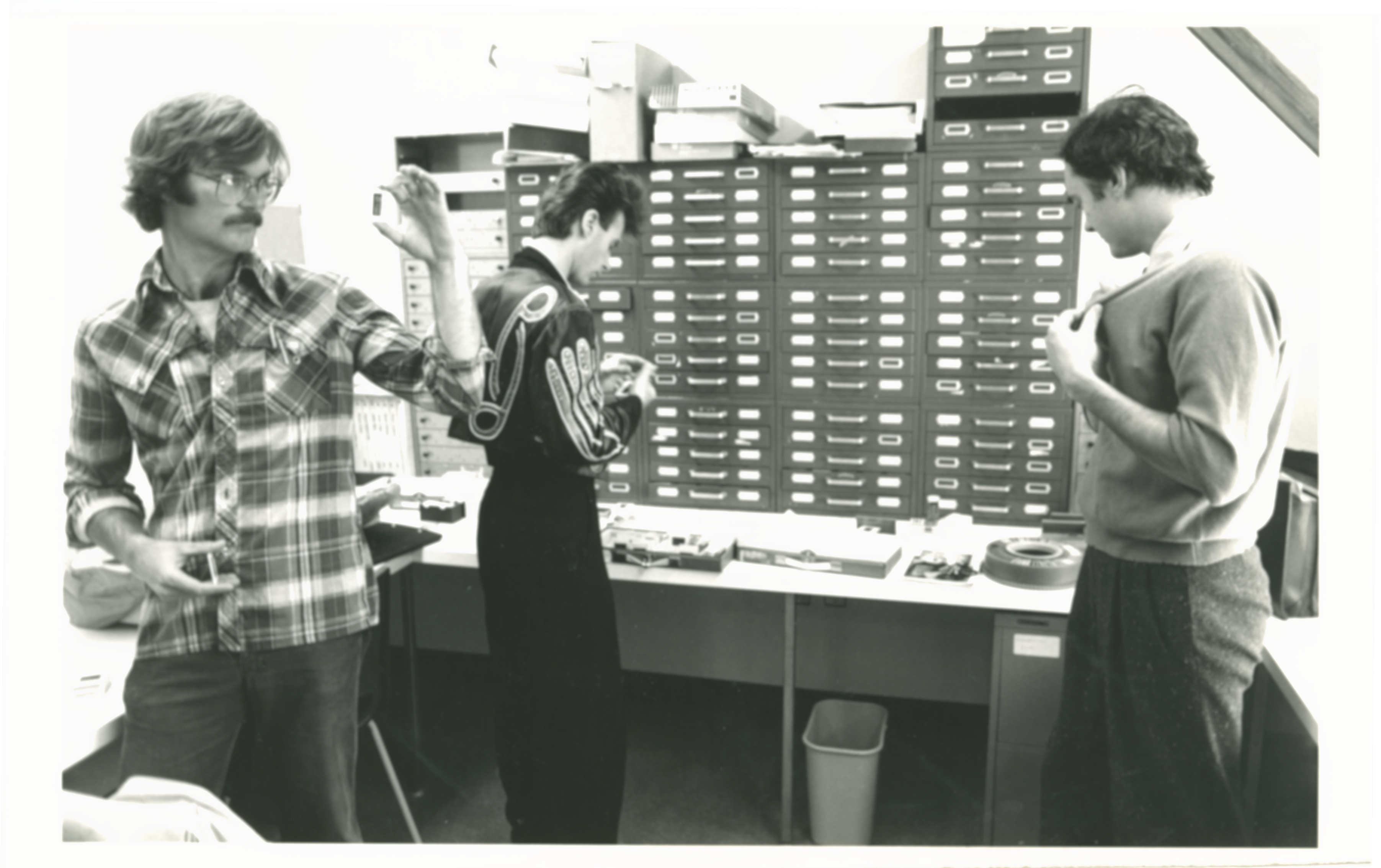 Many in our community will remember the Concourse Gallery as it was prior to renovations in the1980s. This image is taken facing the front doors of our North Building. In its original condition, this photo shows the space before any renovations -- notice the ceiling beams, the open balcony walkway, and the open concept Facilities office, as well as the parquet and tile flooring.

Compare this image with today's Concourse Gallery featured further below. 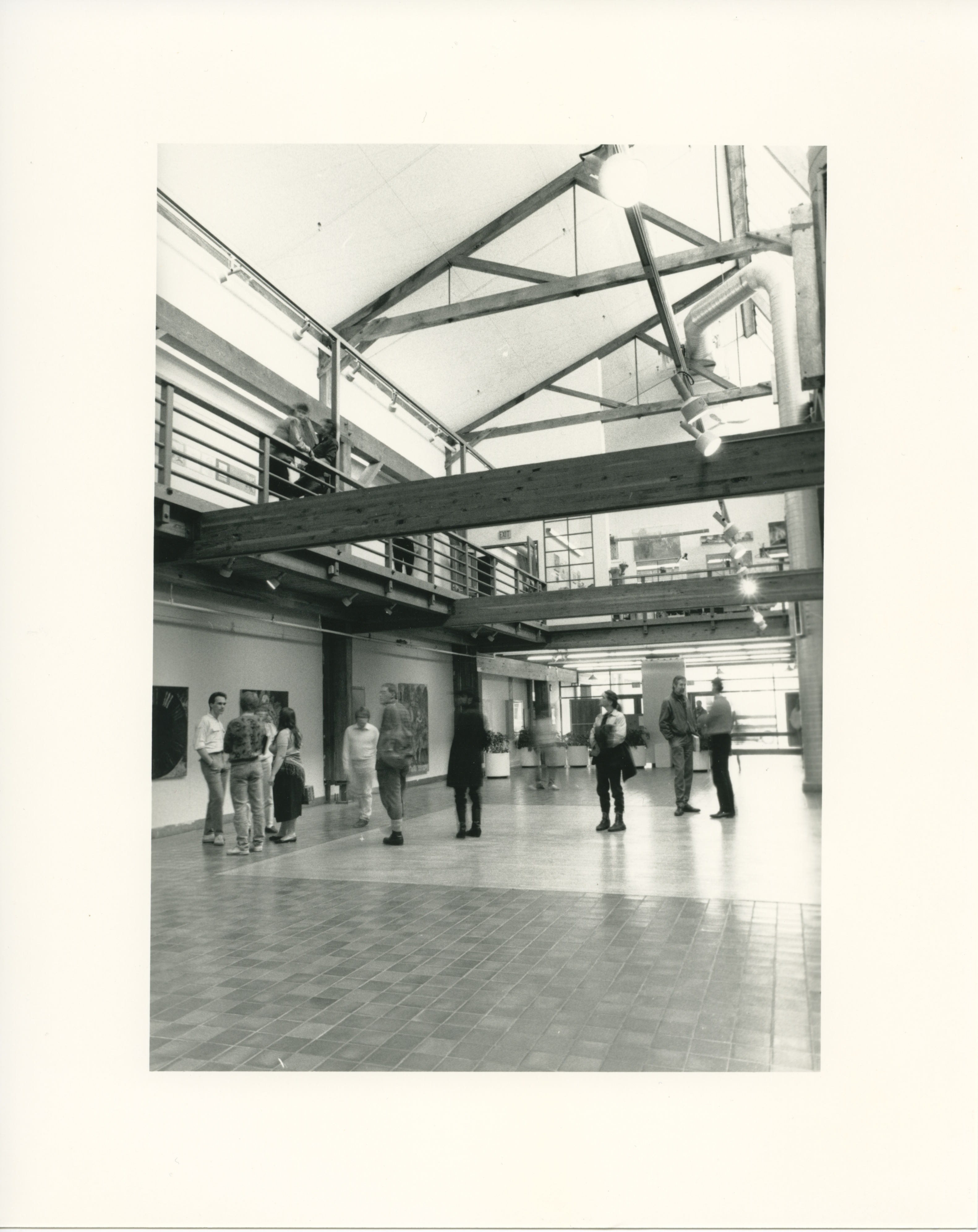 In this image are design students with their instructor Tom Becher in the early 2000's. Tom is now a Professor Emeritus at Emily Carr. 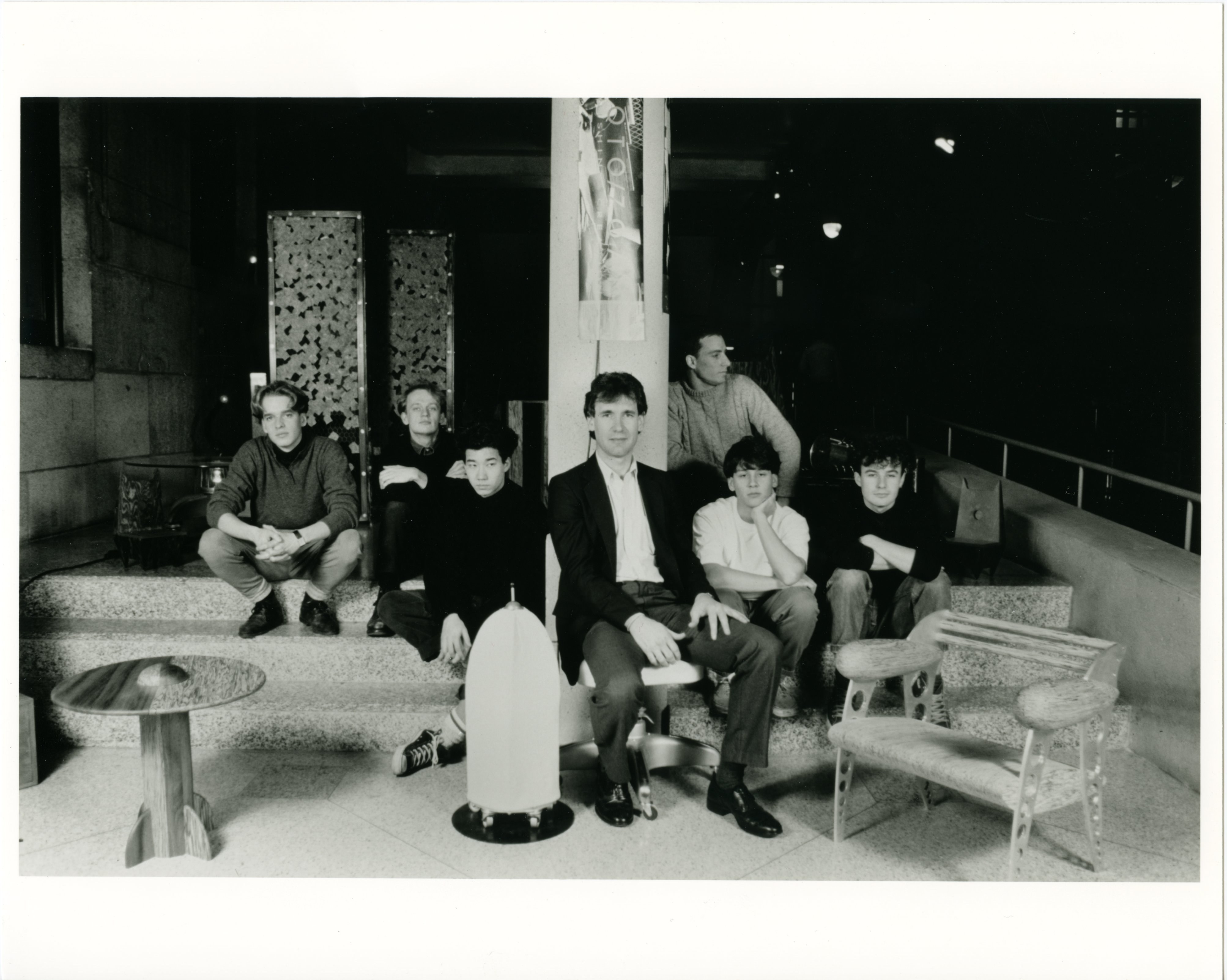 Tom Becher has contributed, for many years and through a variety of roles in administration and instruction, to design programs at Emily Carr University of Art + Design, beginning in 1978.

Currently, he is active in raising the social and economic capital of design disciplines and design-intensive industries in British Columbia through the Resource Database Project. In addition to many community-based initiatives, Tom has always promoted best practices in design management, beginning his career as an architect in 1974. He later diversified into interior design, exhibit design, industrial design, computer development, and interface design, furniture development and manufacturing, as well as corporate strategy.

Tom's academic fascination continues to center on design processes that generate environments, objects, and messages that make us more human.

This is a library book sale in the renovated Concourse Gallery on November 20, 2002. A mix of students, staff and faculty find treasures -- notice that the Reception Desk has not been closed in yet. 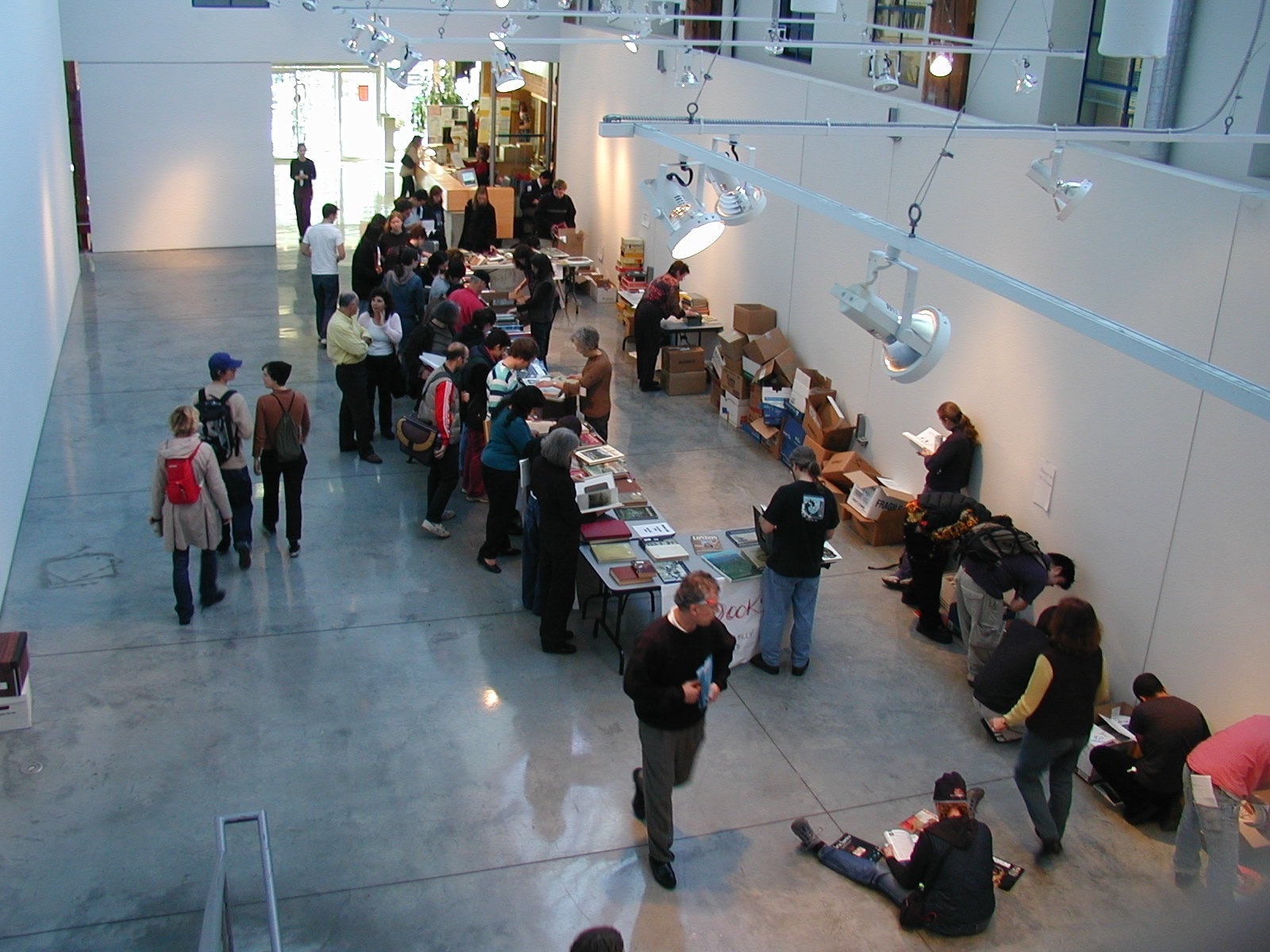 Guiding Our Transformation through 2015 and beyond

On April 24th, 2015, President + Vice Chancellor, Dr. Ron Burnett made Emily Carr University's groundbreaking for the new campus at Great Northern Way official. A media event was held at the site where student-designed shovels broke ground in order for construction to begin, each shovel carrying a symbolic representation of our university's major areas of focus and their significance within our culture and ongoing dialogue.

In an interview, Dr. Burnett answered the question: What is your ideal school? What's the university of the future?

The university of the future -- the best way to think about it is a place largely defined by conversation.

Conversation is not limited to formalities of the classroom, or the formalities of lectures ? but conversation that has a narrative built into it. Emily Carr has a core narrative that structures our conversations around creativity and provokes us to have substantive links between what we do and the communities we serve. Our strength comes from our connections to so many different constituencies.

The structure of the university has to be permeable to allow for community, industry, education to mingle and learn from each other. Right now, we are doing a lot of that, but it's still very difficult because that permeability is hard to manage, as well as generate and sustain. So things have to be much more open and the accountability factor has to be defined by goals that are not just related to outcomes, but are also about quality and richness of experience. read more 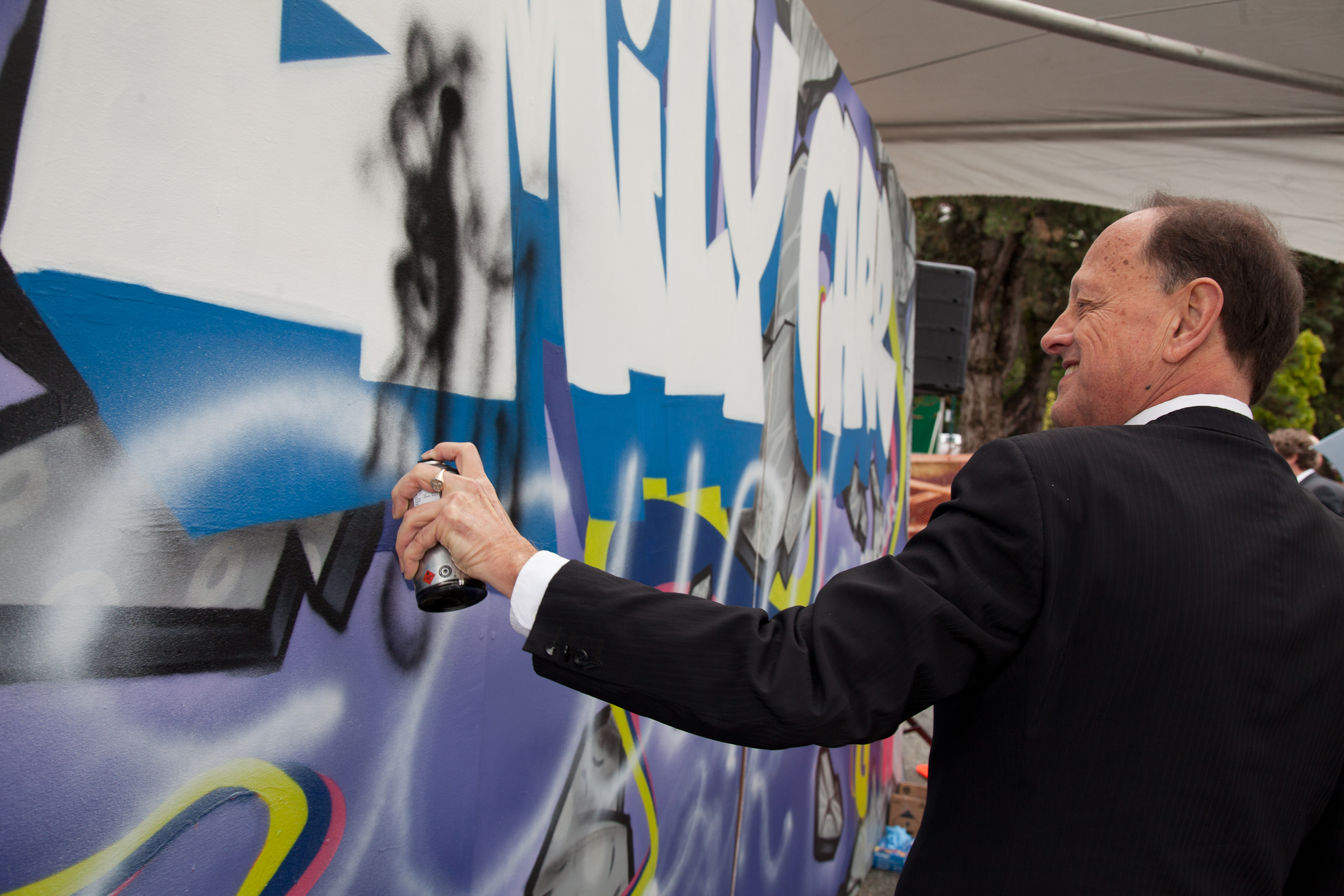 For an extra-inspiring retrospective, check out our student publications also available in the Library

Our student publications are available in the library, including today's own WOO publication, published twice a year which you can see on ISSUU. Learn about when it's published and by whom on the website. 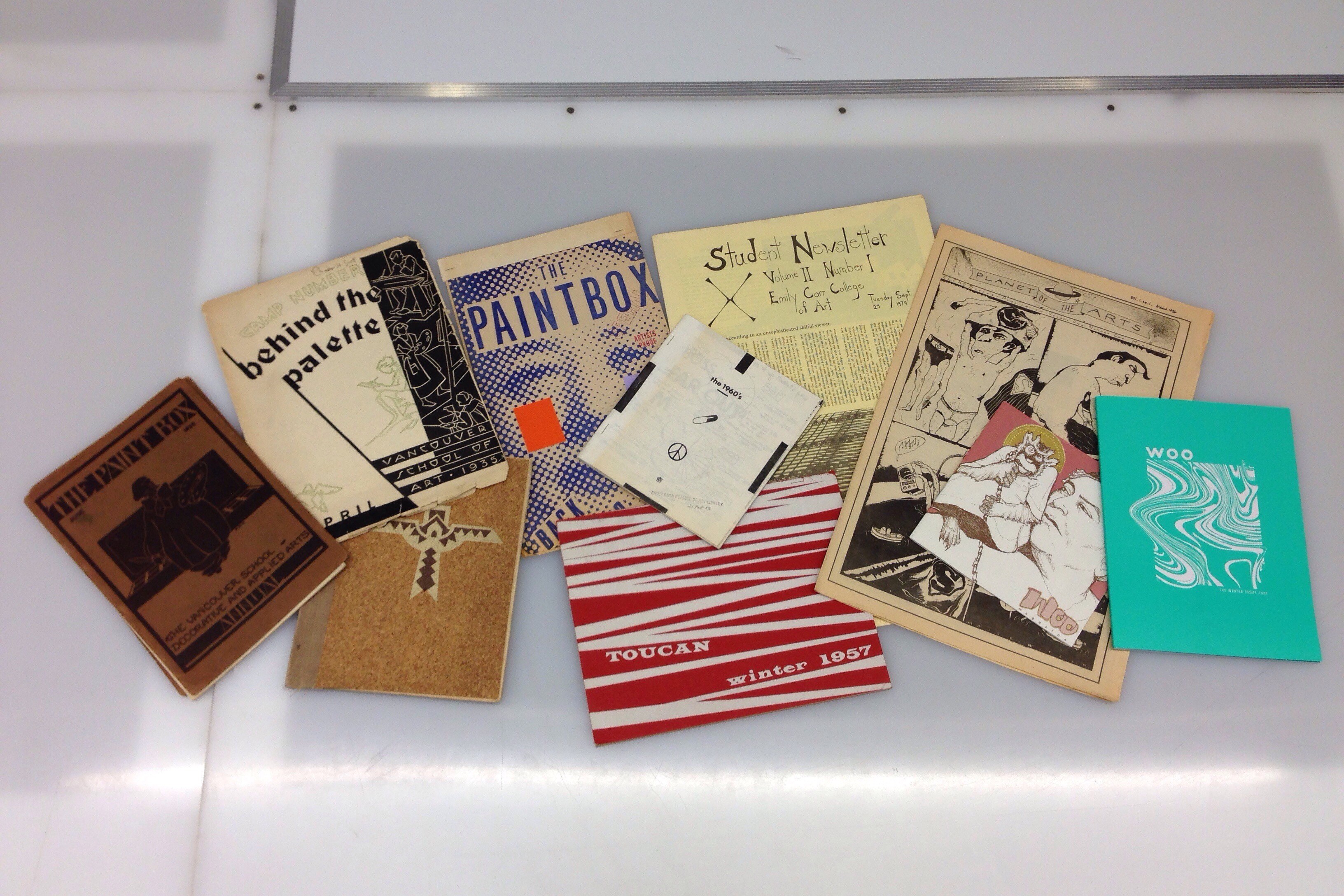