If there’s such a thing as the Midas touch in the volatile B.C. film industry, Kevin Eastwood might have it. The Vancouver-born producer-director has enjoyed a string of successful projects, including a feature-length documentary that sells out every theatre it plays and a documentary series on Knowledge Network that outdrew a U.S. series in the same time slot. His Canadian Broadcasting Corp. (CBC) dramatic series, The Romeo Section, just got renewed for a second season.

These achievements could go to one’s head, but that won’t happen with Eastwood. He views any life experience, good or bad, as an asset after a near-death experience three years ago.

He spent three days in a coma at the UCLA Medical Center, where doctors implanted a cardioverter defibrillator, which allows him to function normally today.

“Best part is I now get to skip the metal-detector lines at airports,” cracked Eastwood.

Born and raised in Vancouver, Eastwood grew up in a household that treasured the arts; his mother was a painter and his father a commercial artist. Eastwood thought he, too, would become a visual artist but got into theatre and film in high school, buying a video camera when he was 15.

While a student at Emily Carr Institute (now University) of Art and Design, Eastwood worked on film sets and performed an internship at funding facilitator BC Film (now Creative BC). That, along with time he spent working at a movie theatre, gave him perspective on the three “prisms” of the movie industry that a good producer needs to know: the funders, the filmmakers and the consumers.

At the beginning of the millennium, Eastwood got on board with startup production company Anagram Pictures, a group of young writers, directors and producers who made some of the best movies to come out of Vancouver. He was associate producer on Anagram’s first film, Mile Zero, and co-produced the comedies The Delicate Art of Parking and Fido. The latter film had a $10 million budget and the backing of distributor Lionsgate in the U.S., played the Toronto and Sundance festivals, was well-received critically and was a hit on home video, making $2.7 million in its first three weeks. But a key mistake resulted in box-office failure.

“It was supposed to open day-and-date [in theatres and on video simultaneously] in Canada and the United States, but at the last minute Lionsgate said, ‘We really believe in this and we’re going to open it in the summertime,’” Eastwood said.

Meanwhile, Canadian distributor TVA Films knew it couldn’t get screens in the summer going up against Harry Potter and Spider-Man films, so it opened Fido in March.

“All our press campaign was driven for a summer release,” said Eastwood, “so when it came out in Canada it just died. Lionsgate then kind of hedged their bets and didn’t do as much. It was really frustrating.”

Eastwood, who wanted to make documentaries as well as fictional films, left Anagram – which became a victim of the 2008 financial meltdown – in 2006 to work as an independent. He began Optic Nerve Films in 2007 and vowed to go light in terms of overhead and staffing. He co-produced with Trish Dolman the feature-length Eco-Pirate: The Story of Paul Watson. This started him on a course of alternating documentaries (Oil Sands Karaoke, Haida Gwaii: On the Edge of the World, Emergency Room: Life and Death at VGH) with fictional projects (Preggoland, The Romeo Section).

The Haida Gwaii documentary has enjoyed phenomenal success. Two weeks of screenings at the Vancity Theatre resulted in sellouts or near-sellouts every night. The dozen screenings at the 420-seat Rio Theatre had similar results, as did three runs in Victoria. In Kamloops, 400 people showed up at a 200-seat theatre, necessitating an additional screening. A week later, the same thing happened in Calgary.

“At our theatre, going to this film became a theme event, like going to the PNE,” said Rachel Fox, programmer for the Rio.

Haida Gwaii, made with a $225,000 budget, has turned a profit without a wide theatrical release and, except for one screening on Knowledge, television exposure.

“I haven’t seen a cent of the box office from Fido, The Delicate Art of Parking or Eco-Pirate,” Eastwood said. “To actually see dollars back from a movie is a rare thing.” 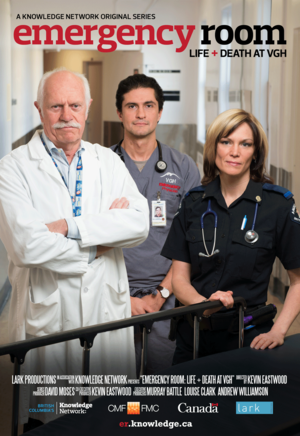 The premier screening of Eastwood’s Knowledge Network series Emergency Room: Life and Death at VGH garnered an audience of 277,000, outdrawing CBC’s Arctic Air and Global Television Network’s NCIS, a U.S. series. He passed on making the second season but is now finishing a two-show wrap-up of the series.

So what’s the secret to finding an audience?

“It’s important to do something that’s original,” said Eastwood. “We’re making Canadian film and television, so we’re at a disadvantage in terms of reach, exposure and financing available. So you have to stand out. Documentaries are often driven by some socially relevant issue, and that’s fine, but there should be an element of play or entertainment. That doesn’t mean you have to dumb it down for the masses. That’s just part of the challenge.”

An example of this is Oil Sands Karaoke. Any doc with “oilsands” in the title might be expected to be extremely political. But the film focuses on oilsands workers taking part in a Fort McMurray karaoke competition, humanizing the people in the frames.

“It’s hard to watch that film and not walk away with some environmental message,” Eastwood said – but environmental groups went after him for being too soft on the industry.

“We’re not interested in making a piece of propaganda if no human being sees it,” he said.

As for The Romeo Section, Netflix will stream Season 1 this summer before Season 2 airs on the CBC.

Where you live now: The West End, downtown Vancouver

Currently reading:This Much is True by James Quinn, Story Money Impact by Tracey Friesen and All the Light We Cannot See by Anthony Doerr

First album bought or music downloaded:What I Am by Edie Brickell & New Bohemians

Most recent music you’ve bought or downloaded:Blackstar by David Bowie

When you were a kid, what you wanted to be when you grew up:Muppeteer

Best advice you ever got: The best advice I ever read regarding the type of creative pressure that any artist inevitably feels at some point was this: don’t worry about making every work that you create be a masterpiece. If you’re a bricklayer you don’t worry about setting every brick perfectly – you just lay the next brick down. Same with being a filmmaker. If you’re a filmmaker, you just make films, plural. And the more films you make, the greater the likelihood that maybe one day one of those will turn out to be a masterpiece.

Advice you would give the younger you: Even if you do all your work right and make a really good film or TV project, you can never control how well it does, so never let that be the motivation. In the end the only thing you are guaranteed to be left with is the memory of making it – so whenever possible make things you are proud of and work with people you like.

What’s left to do: Nothing. Since having a cardiac arrest at age 36, I consider everything a bonus.