Created for the TED2016 conference, ELEVATE is a temporary installation of two warming huts inspired by high-alpine shelters and the back-country winter experience that BC mountains offer. The unique wood structures were designed and built by local students as part of a three-month design-build course run by non-profit school DBR | DESIGN BUILD RESEARCH. 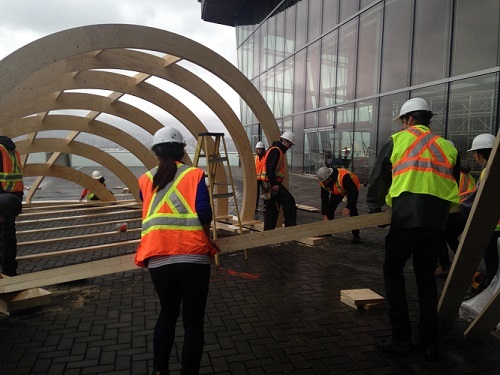 The ELEVATE huts were constructed by a DBR class of 16 architecture, design and sculpture students from Kwantlen Polytechnic University, the University of British Columbia and Emily Carr University of Art and Design. From November 2015 to February 2016, students and teaching assistants worked on conceptualizing, designing and building the outdoor installation for TED2016 held at the Vancouver Convention Centre.

The shelters, measuring 16 feet by 30 feet long, were built using Laminated Veneer Lumber (LVL), and sculpted with CNC technology. The structure is enclosed with shrink wrap to shelter users from the elements and create a warm interior with exposed natural wood.

Vancouver-based Michael Green Architecture facilitated Design Build Research, a not-for-profit organization that has designed and built a variety of projects in British Columbia, bringing together students with varied backgrounds to produce the work. With the ELEVATE project, students were provided with the opportunity to explore wood innovation, technical fabrication, project and client management, hands-on building experience and sustainable design solutions. 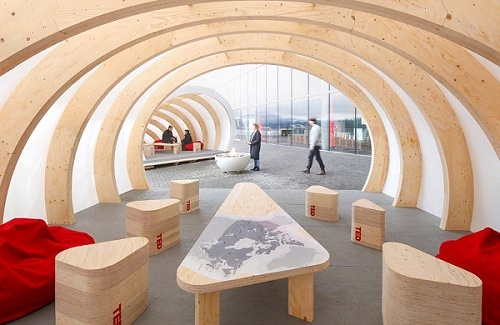 Recent Industrial Design graduate, Neil Manchon, (BDes 2016) has been involved with DBR for the past two years. During his first project for TED2015, creating the massive outdoor pavilion -- Lion’s Marquee, Manchon became heavily involved in managing the project. The following summer, he was promoted to a teaching assistant role during the course of instruction for DBR Wine, and again this year for ELEVATE.

“The most amazing thing about the project was that we finished the construction in 17 days -- from the time we received the CNC machine to the install date,” says Manchon. “There were over 200 pieces created for the two pods that were installed onsite.”

For industrial design graduate Bryce Duyvewaardt (BDes 2016), being part of the DBR team this past winter was an incredible combination of learning, proving his skills and pooling experiences. Bryce worked on the concept design and 3D prototyping, workshop setup, CNC operation, design and construction of an accessibility ramp, as well as construction/disassembly. Bryce also headed up the process photography and shared copy-writing duties. Because of the diverse group of participants, he took away something new each day, and, was able to teach others about his own making experience.

DBR hopes that the huts will eventually find a permanent home within one of BC’s outdoor recreation sites.