Sonny Assu’s ('02) archival pigment print on paper Selective History (2012) critiques the use of historically oppressive language by the Canadian government to proliferate the notion of the “Indian Problem.” 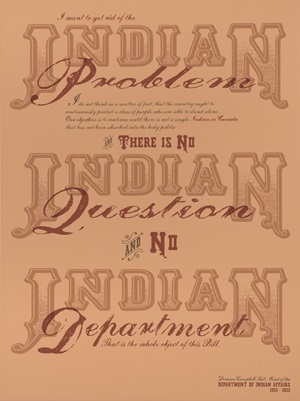 Selected artists and works include:

The Canada Council Art Bank, with approximately 17,500 works, has the largest collection of contemporary Canadian art in the world. It was created to support the efforts of Canadian visual artists and to provide government and corporate offices with the opportunity to rent Canadian art for their offices and public spaces. Since 2001, the Canada Council Art Bank has acquired close to 900 works through its purchase program. Currently, one third of the collection is on rental and displayed in office and public spaces, giving Canadians across the country access to a variety of works by Canadian artists.