As Rene Roddick stood amidst the wildflowers blooming in a Richmond industrial park, he says he was transfixed by a distinct buzzing sound. A few months earlier, any buzz the BC Hydro biologist would have heard in Bridgeport Industrial Park, previously a neglected strip of grass, likely would have come from the high-power transmission lines above.

Now, the park has been transformed into a hive of activity after wildflowers were planted last spring through a joint pilot project between BC Hydro, the City of Richmond and the Emily Carr University of Art + Design to help native bees and other pollinators.

“It’s an air traffic area so there’s a plane every two minutes,” he told Metro. “But every two minutes, it would break and there would be this beautiful hum. The whole of the ground was just crawling with bumblebees. It was just amazing.”

With the wildflowers now in full bloom, the public is invited for a picnic to see the “pollinator pasture” at Bridgeport Industrial Park on Saturday. From 11:30 a.m. to 3 p.m., visitors can bring a picnic lunch and learn about which wildflowers they can plant in their own backyards to also support bees and pollinators.

Once an overlooked 243-metre narrow piece of land in an industrial part of Richmond, Roddick said the idea to transform the park came about through an initially thorny problem. BC Hydro had to remove 120 pine trees that had grown too tall and were threatening the reliability of the power lines and the safety of workers, he said. The utility company worked with the city to cut down some of the trees, replacing them with smaller trees, but were left with a “crappy-looking rundown lawn," he said.

“It looked like 30 football fields of degraded lawn with a little pathway through the centre,” he described it. 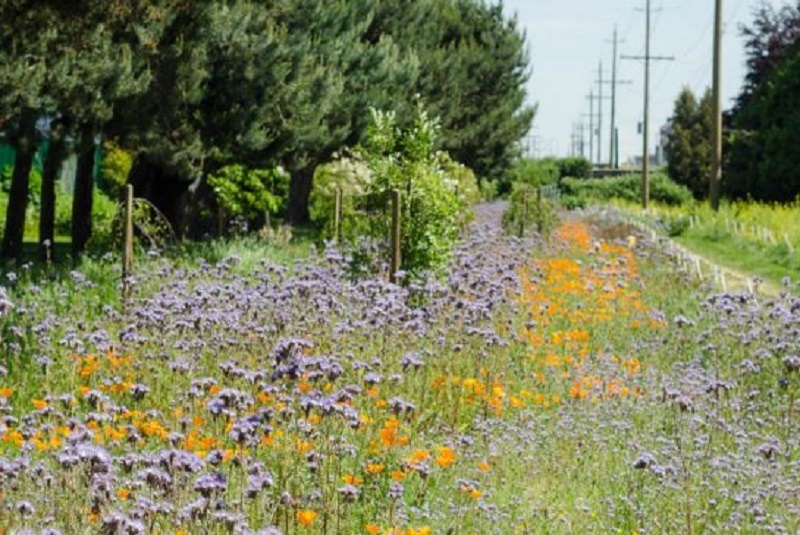 Teaming up with Emily Carr researcher Cameron Cartiere, who specializes in using public art to transform neglected greenways into wild pollinator pastures, they came up with the idea of planting wildflowers as a work of art. Since the park is below the flight path to Vancouver International Airport, Roddick said passengers in jets can look down and see the wildflower art, which is planted in the shape of a pair of multi-coloured bee wings.

Lesley Douglas, manager of environment sustainability for the City of Richmond, said the pollinator pasture is already attracting a diverse range of native bees and pollinators, from bees to wasps and butterflies. Other communities, including Prince George and Pemberton, have also expressed interest in incorporating pollinator pastures in their own parks, she said.

At Saturday’s event, she said visitors to the pollinator pasture will be able to learn what they can do to support native bees, which have suffered major population declines in recent decades.

“It doesn’t matter how small, if you change up the suite of species that you have in your own backyard, you can bring more pollinators,” she said. “The park is a tangible example.”