Street skateboarding is not how you expect world-class furniture designers to get their start. But grinding rails in downtown Vancouver while in high school is where D. Calen Knauf and Conrad Brown, co-founders of award-winning Knauf and Brown studio, began connecting over aesthetics.

"I would say that the average skateboarder has a pretty keen eye for shapes," says Knauf. "Design is a huge part of skateboarding culture. The design of shoes, for example. Skateboarders have a big opinion about what shoes to wear." (Fittingly, Knauf has also designed apparel for Adidas and Stüssy, brands that embrace the urban aesthetic). 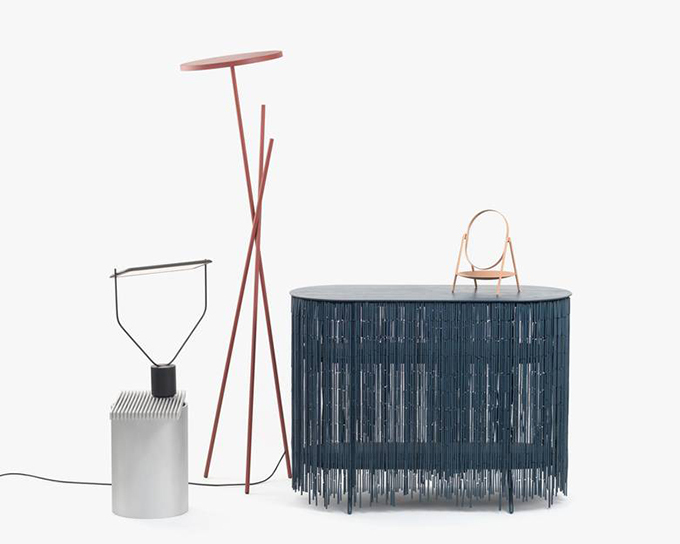 However, Brown says, "it's important to have someone around who is not that into an idea. Because when you are so in love with an idea, you are sometimes blind to the challenges and the things you need to do to make it work."

It's like having a someone spot you doing a tough skateboarding trick – to help point out what you're doing wrong, then help you land it better the next time.

"At the time we didn't have the idea of pursuing designing furniture," says Brown. "But we did a lot of talking about design."

The unconventional beginnings have paid off. The two recently took home the Rising Star award at the prestigious Stockholm Furniture Fair. The accolade was presented by top European design editors who were impressed by the pair's sophisticated, poetic pieces. The Belcarra lamp, for example, which was inspired by dock pilings piercing the surface of the ocean, is composed of intertwined, reed-light sticks, topped by a halo-like light. The Keefer credenza, which is wrapped in a beaded skirt, blurs the boundaries between solid and void. "There's an enjoyment of reaching through the beads, and hearing the tinkle against the sides," says Knauf.

After high school, both initially pursued different career paths – Knauf in graphic design and Brown in photography. But in their 20s, the two studied industrial design together at Vancouver's Emily Carr University of Art + Design. "It wasn't until later when each of us was furnishing our own homes, when we weren't really finding all the things we wanted, that we put a big focus on furniture design," said Brown.

By the time they graduated, in 2013, they had established their studio and had two pieces of furniture in production, including the Profile Chair, an elegant folding chair that doesn't look conspicuously out of place or clunky when there are too many guests for dinner.

The length and depth of their friendships means they share common values, including a desire be as "style-less as possible," according to Knauf. Both would like to be versatile in their design skills, as opposed to being pigeonholed into a rigidly defined look.

That said, sharing a studio has its challenges: "It's always harder to tell someone you care about that you don't like something," says Knauf. "If you're not super-close to someone, it might be easier to say 'that's whack,'" adds Brown. "At the same time, we are super-honest people."

About Knauf and Brown:

Knauf and Brown is D Calen Knauf and Conrad Brown, based in Vancouver, Canada. Many years of friendship have lead to the partnership they form now: The pair met through skateboarding in 2001 and have been exchanging opinions on shapes, colours, and textures ever since. The rarity of their collaboration shows when discussing the final results of a project–in most cases it is impossible to point out which element of a design came from which mind.

Knauf and Brown have an unnatural obsession with studying the spaces and objects that surround life. Both partners bring strong aesthetic experience from image-based practices, Calen coming from a graphic design background, and Conrad working in photography. They place a huge importance on knowing how to balance practicality with beauty, and when to prioritize one over the other. For the duo, the relationship between function and form is complex and ever changing.

Their studio was formed three years into a four year bachelor degree in industrial design. The pair’s Heavystock shelving, designed during their third year of school, was noticed by designer Kenyon Yeh, and is now manufactured by his brand, Esaila, after its debut at Maison et Objet in September of 2013. Their work and interviews have been featured online and in print, including Frame, RUM, and Dwell magazines.