On Wednesday morning in the Wilson Arts Plaza at Emily Carr University of Art + Design, Dr. Cameron Cartiere and a team of volunteers installed 6,000 individually numbered fledglings. A true measure of the community, the fledglings took over the plaza in less than an hour and a half.

The fledglings are one part of a community-engaged art project called As the Crow Flies, led by Cameron and the chART Project team. They were created over a period of months earlier this year at workshops across Vancouver, with the help of countless community members of all ages.

Cameron took some time during the installation to share the inspiration behind her project, and where community members and bird enthusiasts can see the fledglings during the upcoming Vancouver International Bird Festival (August 19-26). 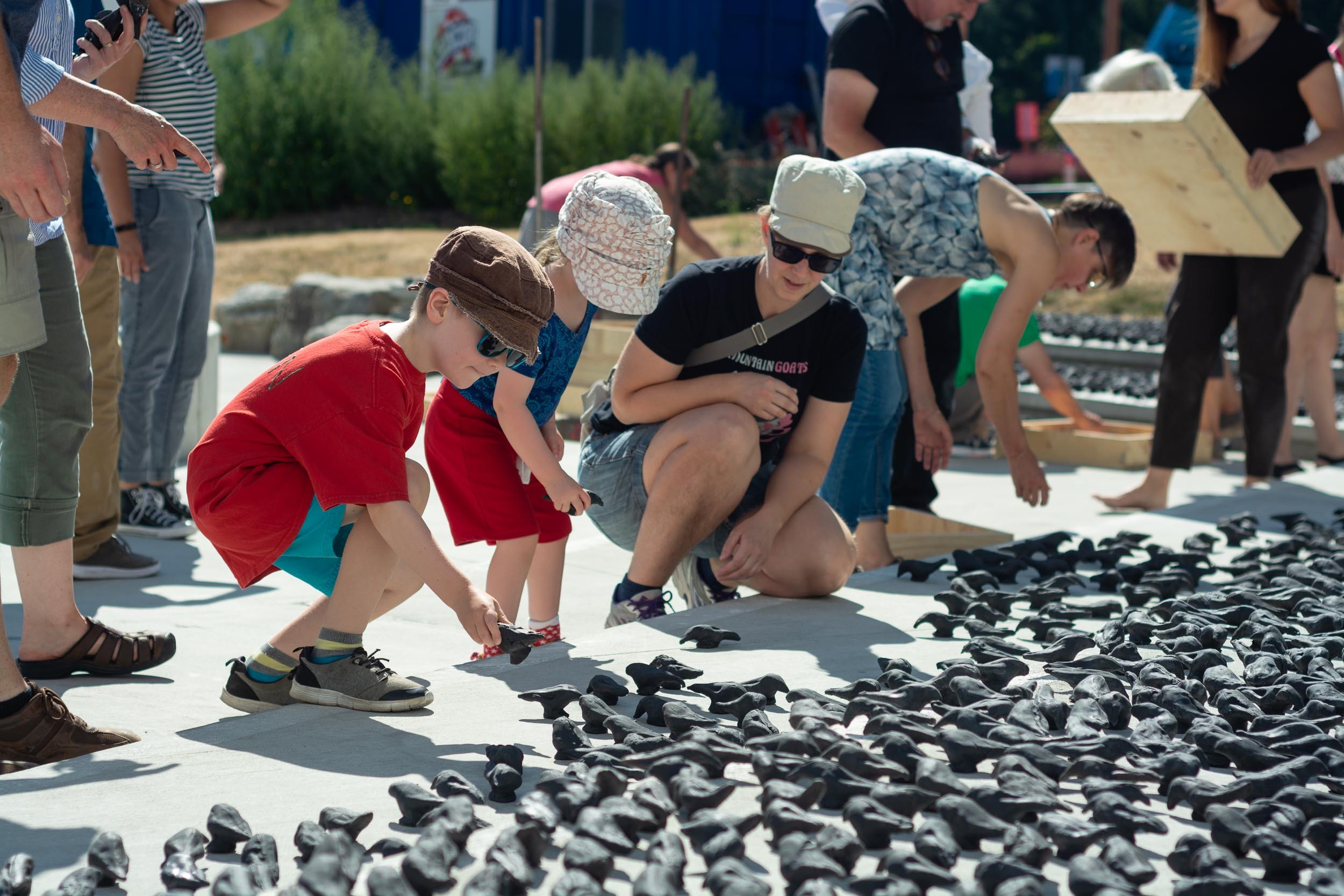 Aside from the ubiquity of crows in Vancouver, what drew you to them for this project?

Because crows are the unofficial ambassador of Vancouver.

The 6,000 fledglings came from the low-end estimate of the flock that travels every day from Vancouver to the Still Creek Rookery in Burnaby. The estimation is between 6,000 and 20,000 birds. I chose the low end for this flock otherwise I think I might have lost my team.

This is the only time that all the fledglings will be installed together. Why did you choose to do that here?

This project was really about community. We specifically wanted to foster our own community, which is why several events have taken place on campus and why the first flight will occur at ECU. It’s a tribute to all the faculty, staff, and students that took part in this project.

Who are some of your creative collaborators for this project?

Martin Rose is the creative director for the animation component of the project, and Christian Blyt is in the industrial design studios right now preparing the support for the nests. 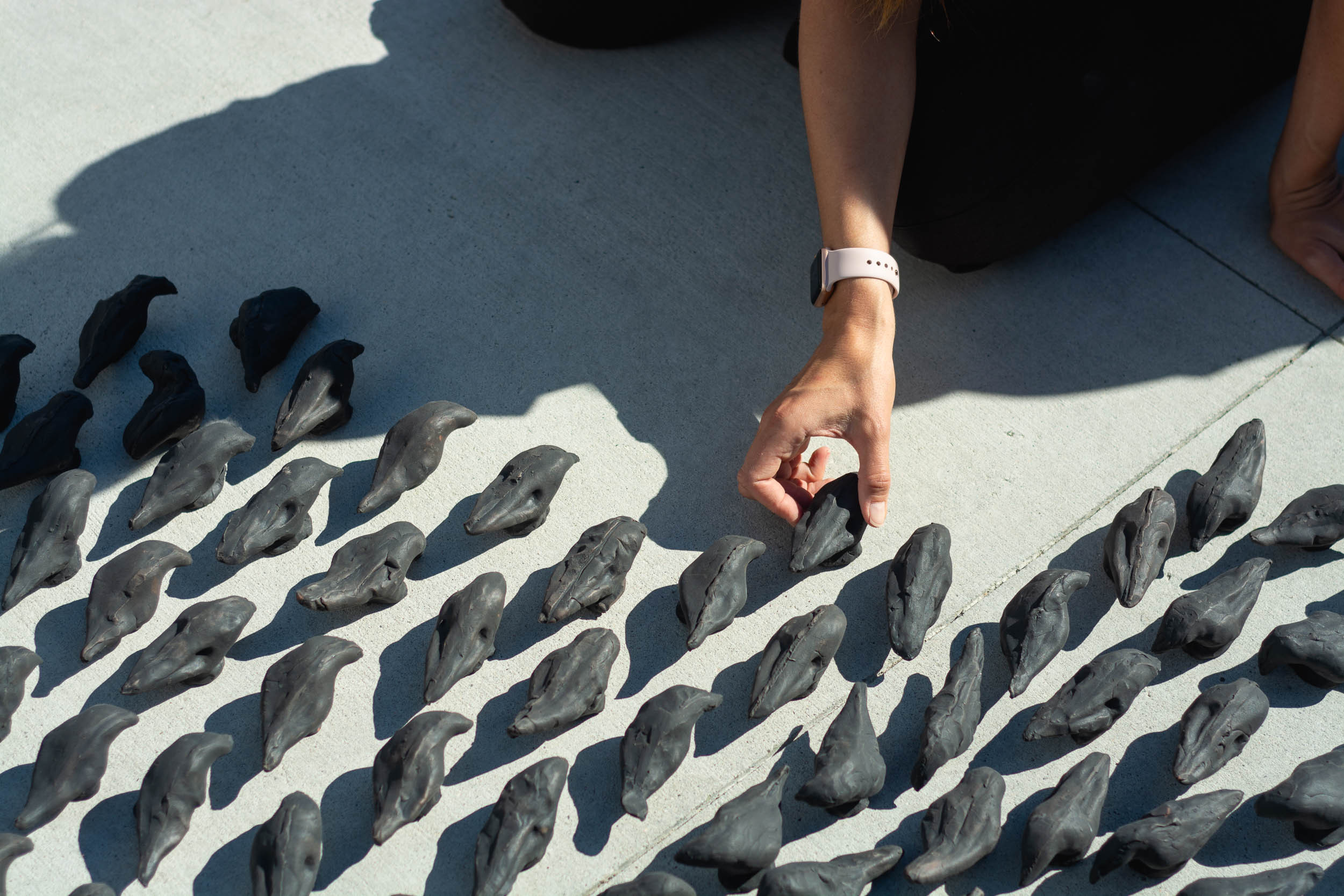 What can people do to make the city more crow-friendly?

It’s not necessarily about making the city crow-friendly, but rather promoting an awareness of the habitats that we share within Vancouver. For instance, urban crows make their nests much higher than rural crows, but most people don’t notice that there is a nest above them. Most negative crow stories involve dive-bombing, but when you get to the root of the matter, it likely happened during fledgling season when they are protecting the nest.

The mortality rate of fledglings is 50%, which is reflective in the fragile material that we chose. Although we had hundreds of people helping with this project, we have only lost maybe a dozen of the 6,000 crows in the process. If a ceramic crow breaks, it is a great lesson on that fragility.

The Nesting Nests that will take place on the Arbutus Greenway is a nice tie in to the protection of fledglings in the nest. Will there be any fledglings there?

Yes, we’re reserving half the fledglings to give away during the events. The nests themselves were woven from harvested invasive species, which provides another lesson about habitats. 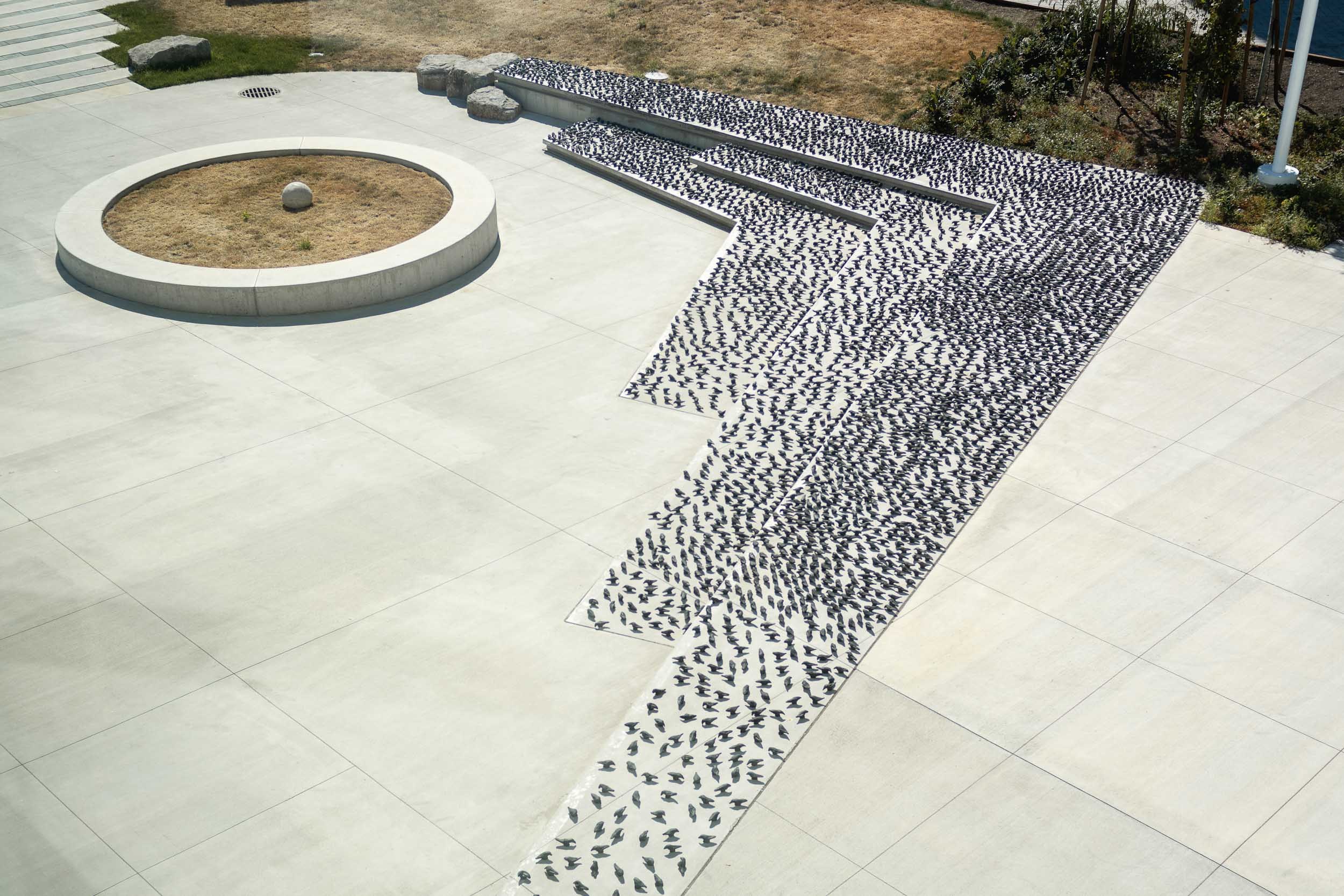 Where can people see the fledglings during Vancouver International Bird Festival?

The fledglings will be at a number of events, including three On the Wing animation events:

They'll also be perching at community centres during the Festival. You can find them across the city:

Anyone is welcome at these events, and fledglings will be ready for you to take home!

Dr. Cameron Cartiere is a professor at Emily Carr University of Art + Design. She is an artist, researcher and writer specializing in public art, urban renewal, and environmental issues. She founded chART Projects in 2012 as a way to explore the long-lasting connections between public art and community engagement. Cartiere is also the co-founder of Border Free Bees, an arts-led research project collaborating with municipal governments, artists, writers, ecologists and scientists to convert neglected greenways into pollinator pastures using public art as the driving force for sustainable ecological change. She is currently Professor of Public Art and Social Practice in the Faculty of Culture + Community at Emily Carr University of Art and Design. She lives and works in Vancouver, BC Canada.