Métis artist Kim Stewart spent the first week of October in residence at the Aboriginal Gathering Place, welcoming the entire Emily Carr community to join her in the process of traditionally tanning a deer hide. Kim, an interdisciplinary artist based in Kamloops, has been practicing hide tanning for nearly 20 years. She also describes her practice as Metissage, defined as a woven mix of cultural thinking.

Kim holds associate degrees in Fine Art, Illustration and Graphic Design, and a Master's Degree in Art Education from SFU. At SFU she was supervised by Celeste Snowber, and became interested in exploring her Métis identity through art.

Kim spent many years as an instructor at the College of New Caledonia in Prince George, teaching fine arts, web and graphic design, and Aboriginal studies. She also developed an online curriculum that combines artistic practice, research and critical writing to explore and define Métis history. In particular, her course studies how Métis women were economically involved in Canada through the production of textiles and goods like octopus bags and hide garments. 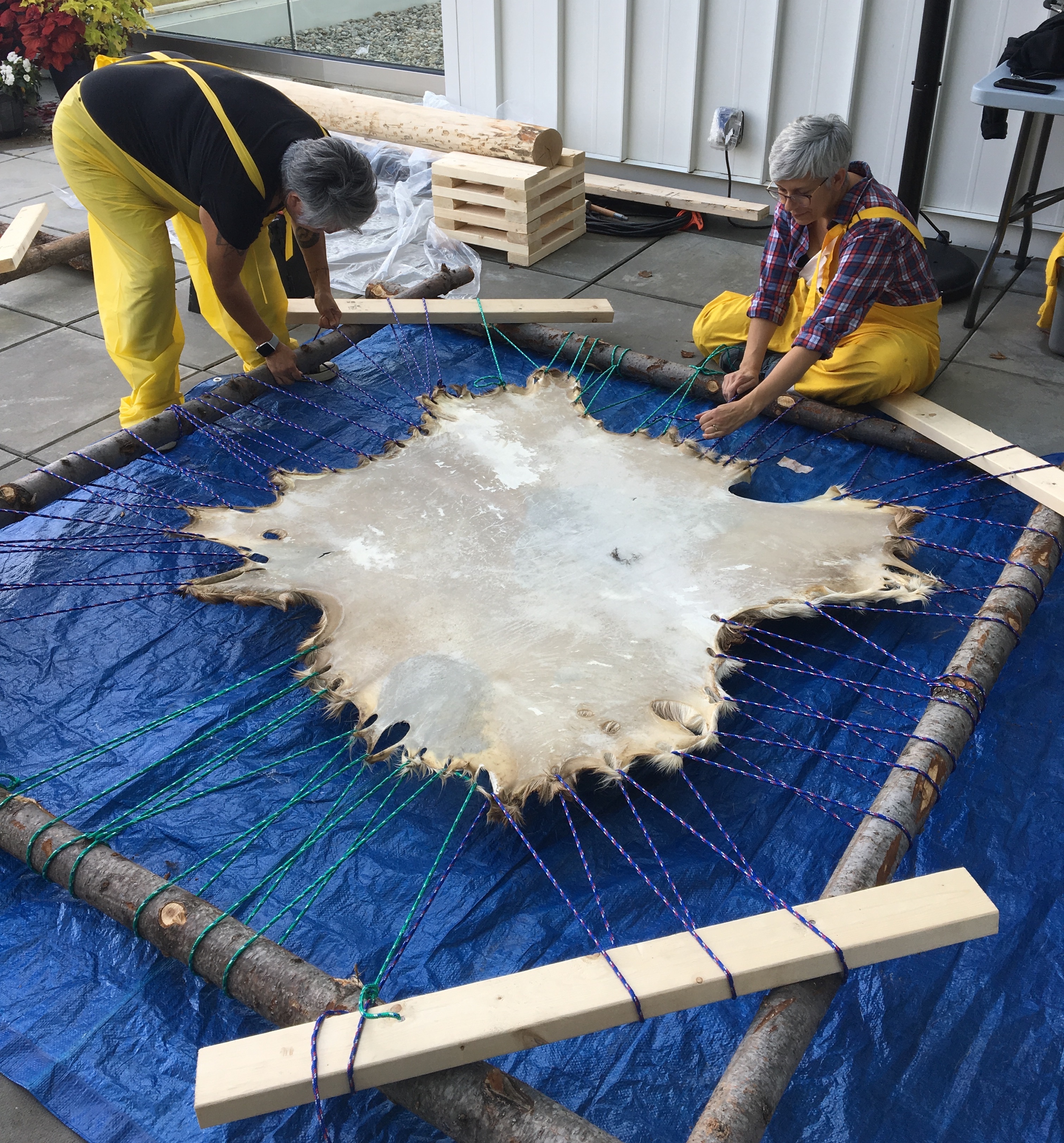 Historically, Métis women would use animal hides to make garments that reflected European fashions. Handmade waistcoats and overcoats made from hide and decorated with porcupine quills and beadwork were produced by Métis artisans and worn by prominent Canadian politicians in the 19th century.

“One of the fun things I do in my course is a comparison between the waistcoats in England and the Metis-Canadian version,” says Kim, “The students also do caribou tufting and finger weaving to better understand what it would have been like to be a Métis person during that time, and also the contributions that the Métis women made to Canadian identity.”

In 1998, Kim and Dr. Heather Young-Leslie received a Canada Council for the Arts grant to study the process of recreating traditional Métis hide garments. “We couldn’t find any Métis elders who were still tanning hides,” says Kim, “but these two Carrier ladies were still doing it on a regular basis, so we wooed them with tea and cookies and they agreed to teach us.”

The traditional method for preparing hides is not for the faint of heart, as it relies on a special ingredient: animal brains. “There’s an enzyme in the brains that breaks down the connective tissue in the skin.” The same enzyme can be found in egg yolks, though Kim has found that yolks don’t work as well. The Carrier women who taught her the method used kerosene and brake fluid, but Kim wanted to share a non-toxic method with the Emily Carr community. Brains are not without their challenges: “They decompose faster than anything else,” says Kim, “And sometimes they liquify right in your hands as you try to collect it.” Her residency at the AGP marked her first time using the brain-curing process. “First you scrape the hair and membranes off the hide,” Kim explains, “Then you heat up lard and brains, and rub those in.” After that, the hide is soaked, washed, stretched, and wrung out until dry. “It’s hard work,” says Kim, “You have to work it until it’s dry or it stiffens up.”

Once it’s soft (“like flannel”), Kim smokes the hide. It’s sewn into a pillowcase shape and then placed over a bucket of smoldering spruce. The smoke releases the tannins from the wood, which give the hide its distinctive colour and waterproofs it.

Kim plans to leave the tanned deer hide at Emily Carr for students and other members of the community to use as a material in their own art practices.

To learn more about Kim and her work, visit her website.