Erica Wilk (BFA 2011) is the owner and operator of Moniker Press, a risograph print and publishing studio in Vancouver, that works collaboratively with artists and writers to produce small editions of books, zines and print ephemera. She told us about learning the publishing business through trial and error, and why she loves the risograph.

Describe your practice in three words.

If you weren’t doing what you are doing now, what would you be doing?

As an artist, I’ll probably always be making something, but if I wasn’t running Moniker Press, I’d likely be doing something art related that involved more travelling.

Why did you get interested in risograph printing in particular? What makes that medium special?

I first heard about risograph printing through a friend in 2013, but I didn’t really become familiar with it properly until I bought a small RZ machine in 2014. Moniker Press started through a collaboration with my studio mate, Shannyn Higgins, who hired me as a designer to create, and produce books for a project.

After doing some research it seemed as though buying a printer would be more economical than ordering from a print shop—in retrospect, it was not. In addition, to unforeseen expenses, it took a lot of time and effort to make 400 books myself. It was a huge learning process, but that’s how Moniker Press began. With RZ, I started printing personal projects as well as posters, flyers, etc, for friends and clients. Over the course of the five years I’ve been running Moniker, I’ve expanded various print services, as well as developed an intentional collaborative publishing practice.

The process of risograph is what makes it unique. Many of the riso’s restrictions are considered to be part of the charm, including the misalignment and limited colours. It’s also more affordable than offset which is a plus for artists who don’t want to print digitally and who are working with medium size editions. For me, I think it comes back to the tactile unique nature of a risograph print. It’s not perfect, it has character. I enjoy working with its restrictions. 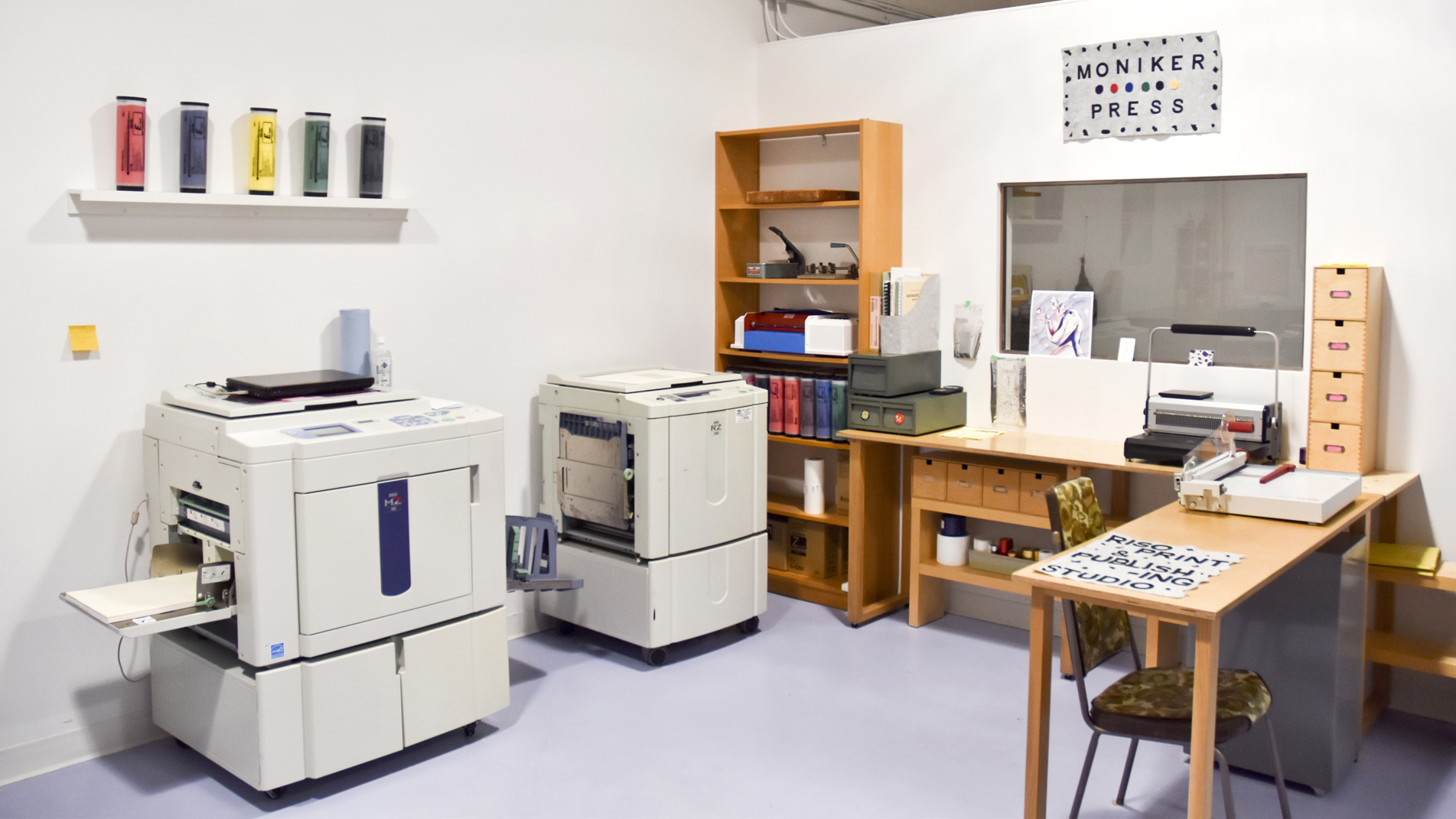 What publication or project are you proudest of?

This is a tricky question, every project I work on is so unique, each one has an aspect I’m proud of, and—as it goes with art—each one has something I would improve, or learned from. Mostly, I love that I have the privilege to produce publications collaboratively with so many amazing artists, with a different process for each of them.

For each publication I try to make the book (or zine) as an object relate directly to the content I’m working with. For example, for the trees was inspired by old textbooks and encyclopedias, because Sarah Davidson's drawings are often influenced by illustrations found in them. Because of the restrictions with risograph (colour, size etc) I am always pushing to experiment with the medium.

Mobile Moniker is one personal project of mine that I feel helped to direct my current practice to where is is now, it connected me to a community of printers who I learned a lot from. More on that below!

How did Emily Carr prepare you for the challenges you’ve had to face as an artist/designer?

I transferred to Emily Carr in my 3rd year in order to complete my degree. In some ways I think this allowed me to develop independent motivation, which I see as key to the ability of balancing a freelance work lifestyle. At the time, I didn’t have to choose a specific major so I took many courses where I learned skills that still help me to this day, such as analog photography, printmaking, film/video and critiquing. The opportunity to have access to so many different facilities and learn from awesome instructors such as Beth Howe, Diyan Achadi, Richard Clements and Celia King was invaluable.

I worked in the print studio as a student monitor, and was also the type of student who stayed in the darkroom past midnight because I was so into the process of experimentation. I also took a semester off to study art in India which extended my degree by a year, giving me more time to focus on my work.

What advice do you have for new graduates, or those who want to start their own press?

My main suggestion would be: start simple. You don’t necessarily need tons of expensive equipment or to run a print shop in order to publish or make books. Go to the library, experiment using their photocopier, play around, fold paper. A project doesn’t need to be an edition of 400 to start (something I learned the hard way.)

Other suggestions—get a studio space, take workshops, attend zine fairs, support printers and publishers, read about artists publishing (there are tons of good resources), collaborate, invest in community building after school, learn to find balance in your work and non-work life to avoid becoming burnt out! 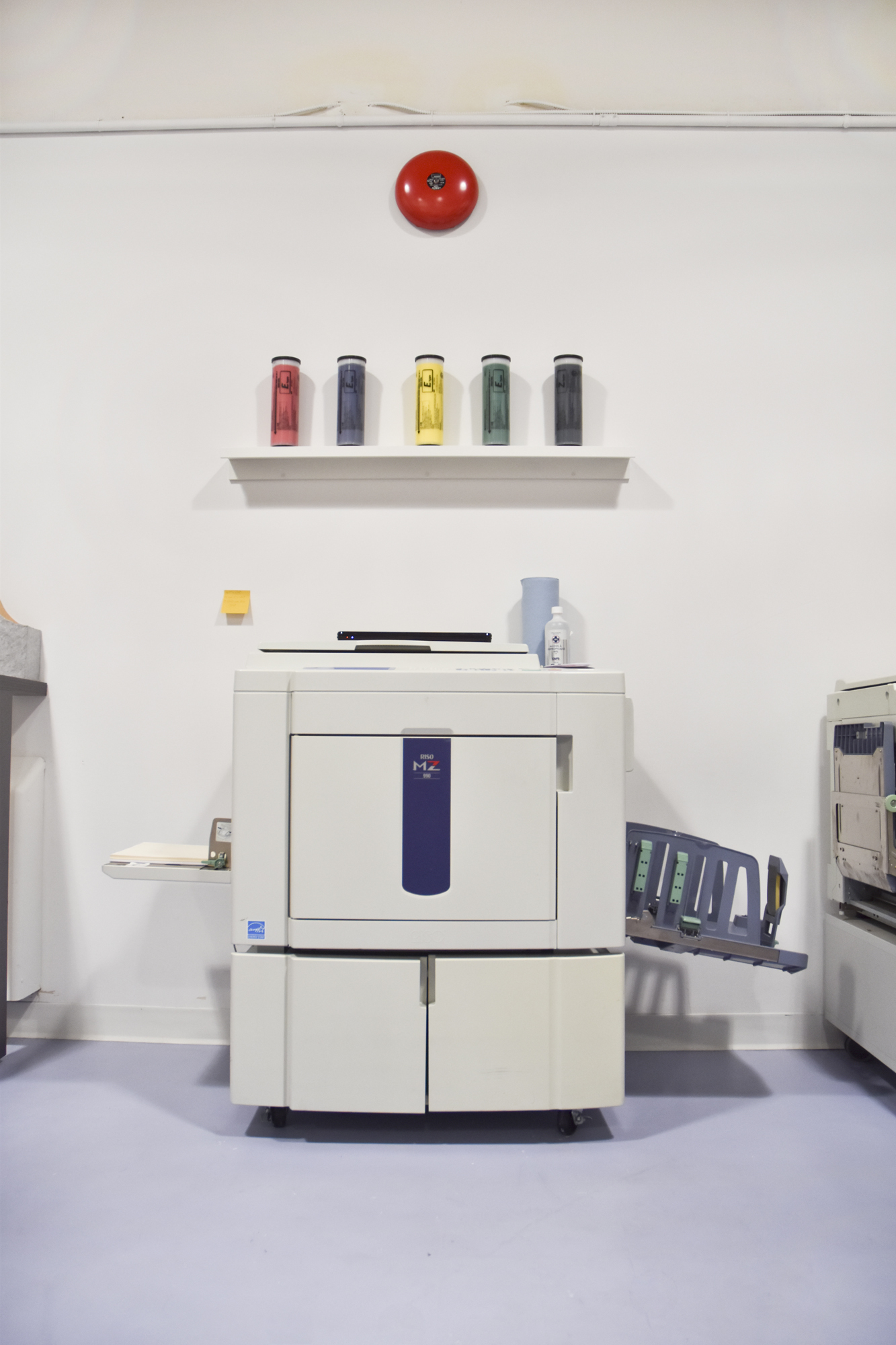 What are you most excited about with Moniker Press right now?

I’m most excited to launch Moniker Press’ new larger studio, which is a book production and community space where I plan to run workshops, open studios and different book related programming.

The space is made up of an assembly of artists who use publishing to inform their practice and currently houses Aeiou, Hayley Burns, SPIT, and soon, Blank Cheque Press. The studio was created to foster inclusive education and community around artists’ publishing and printmaking, offering opportunities for observation, practice and experimentation through the medium of printed matter. It’s also going to be hosting a Publishing Residency as well!

Who else in your creative community inspires you?

There are a lot of printers in Mexico and Europe who have inspired me greatly, including Gato Negro, RRD and Casa de El Hijo del Ahuizote in Mexico City. I’ve had the opportunity to meet many different printers from around the world through my ongoing project, Mobile Moniker—a digital archive and mail project. Essentially, I visit risograph print shops in different parts of the world as I travel. So far, I’ve visited print shops in Europe, Mexico, and eastern Canada. The main point of the project is to connect and learn from other printers, as well as document their studios and collaborate with them. Part of Europe portion of the project consisted of mailing the collaborations to people around the world.

Inspiration strikes me in many ways, going to galleries, art events, being in nature, discussing ideas with others, riding my bike. In Vancouver, I am inspired by the work of all the artists I have had opportunity to collaborate with, to list a few others that have inspired me in recent months: Contrast Collective, Flavourcel, Access Gallery, Field Contemporary, Current Symposium, Vancouver Art Book Fair, DDOOGG, Brick Press, Jo Cook / Perro Verlag, Duplex, Freak Comix, Forge Art Magazine, Half Letter Press, Vide Press…I think I could add to this list forever…

Who else from the Emily Carr alumni or student community do you think we should interview?