ECU faculty member Michael Markowsky recently made headlines when he announced his hope of joining Japanese billionaire Yusaku Maezawa in his 2023 expedition to the moon. Maezawa has recently announced a project called #dearMoon, in which he plans to take seven artists on a SpaceX journey to the the moon.

The #dearMoon initiative was only announced on September 17, but Michael has been dreaming of traveling to the moon for much longer. In 2008, he declared his intention of making a painting on the moon by January 1, 2030. He has been preparing for this lunar journey by creating artwork in extreme conditions with the Canadian Forces Artist Program. Through the program he has travelled to the Arctic to paint in -40º temperatures, becoming the first person to make a painting at the North Pole; he’s also made drawings while flying faster than the speed of sound in a fighter jet.

Michael told us more about his lunar ambitions:

How long have you been teaching at Emily Carr University?

I’ve been teaching here since 2013 in the Illustration and Foundation departments. This semester I'm teaching two Creative Process classes for Foundation students.

I like working with more advanced students that have had lots of experience and have already developed their art practice —it's like tinkering on a Ferrari. But there's also something really special nice about working with new students who are totally fresh and open, who don't even know what they want to do when they get here, and to help them bring out the artist or designer within.

How would you describe your practice?

I do lots of many different things. Mostly drawing and oil painting, portraiture and landscapes. But the common thread throughout my work is that I’m usually working outside of a studio, on location meeting people or drawing in a landscape. And usually there's some sort of wrench that I throw into the process to complicate it. That forces me to come up with creative strategies to work around it, like drawing in a fighter plane, which I did through the Canadian Forces Artist Program, otherwise known as the “War Artist” program. 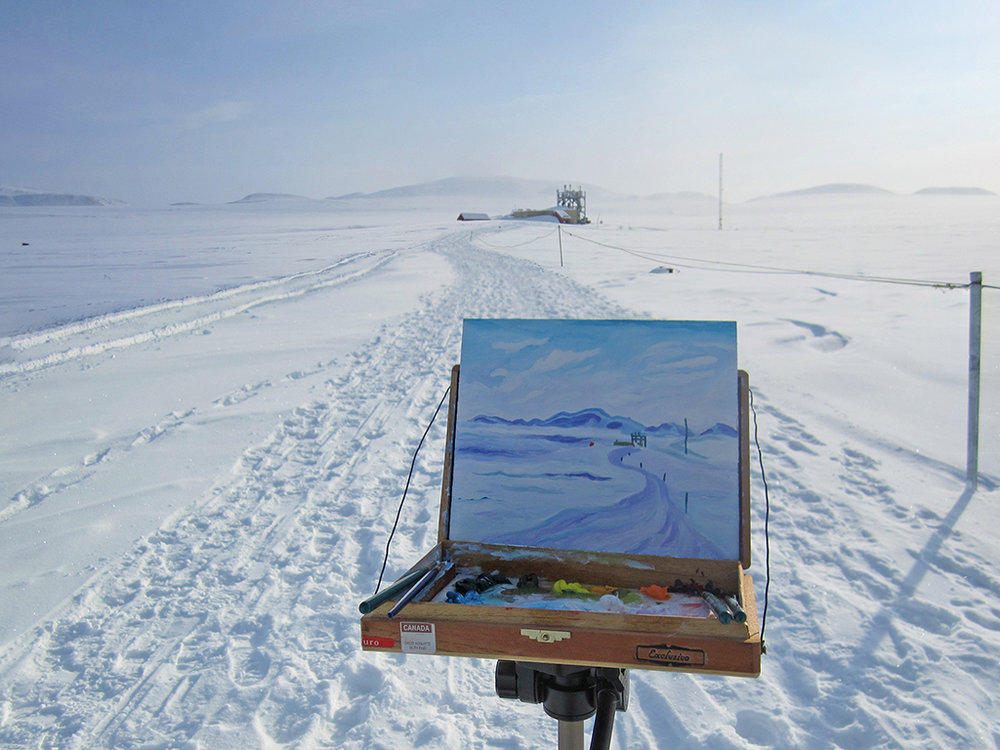 Why do you want to go to the moon?

Ten years ago, I had a dream about going to the moon and painting there. When I woke up I thought, that's silly. But the more I actually started thinking about it, it seemed silly that it hadn't happened already.

Eventually there will be artists on the moon, and on Mars, and elsewhere in space. That could be in five years, or a hundred years, or five hundred. There won't just be doctors and scientists and air force pilots in space, who are incidentally the only people that have been there so far.

Neil Armstrong was a test pilot. He was trained to use a camera to document the experience of going to the moon. And he and Buzz Aldrin and all those other astronauts took great images, but they're purely documentary images. They're about recording and documenting for scientific purposes. So far we've only seen the art that soldiers are capable of making, but what if they had sent a photographer or a painter to the moon? I mean you wouldn’t train a bunch of artists how to use guns and send them on the most important and dangerous military mission ever, so why does it make sense to send soldiers to do the work of artists?

How did you hear about #dearMoon?

I was about to board a plane from Calgary when I saw that Elon Musk was about to announce something with SpaceX, and when I got off I had dozens of texts from friends and family about this visionary billionaire in Japan, Yusaku Maezawa, who wants to bring artists to the moon with him. I've been talking about going to the moon for ten years now so now every time something space-related comes up, people are quick to let me know.

If you could choose the other artists travelling to the moon with you, who would you pick?

I'd want to go with people who are really open-minded, who would go with as little an agenda as possible. Because if you're going with a specific idea in mind, then you've already come with a filter that you're going to look through. Like I’d love to go with a country musician who may realize that this experience can only be conveyed through heavy metal.

The #dearMoon journey is planned for 2023. What are you working on until then?

I’ve been commissioned by the Calgary Stampede to do a project with them for next summer, hopefully making drawings and paintings while riding around in a chuckwagon. I’m putting the finishing touches on a novel about my experience drawing while walking the Camino de Santiago in Spain. And lastly I’ve just begun illustrating a graphic novel biography about the death of Tom Thomson.

Michael Markowsky is an award-winning artist and writer who makes drawings, paintings and books about the landscapes and people he meets while travelling around the world. He was born and raised in Calgary, Alberta. He attended art school at ACAD (Calgary), Royal College (London, UK), Cooper Union (New York City) and Art Center (Los Angeles) where he received his MFA.

He has exhibited his work in galleries and museums in New York, San Francisco, Los Angeles, Montreal, etc and is in the collections of hundreds of prominent private citizens, businesses and public institutions. Among the artists he's exhibited with are Robert Rauschenberg, Ed Ruscha, William S. Burroughs and Ken Lum.