The film tells the story of internationally renowned Haida carver Robert Davidson, who, in 1969 at age 22, was instrumental in changing the history of his people. It was that year that a totem pole Robert had carved was raised above Old Massett in Haida Gwaii – the first totem pole to be raised there in almost a century.

More than a century previous, Haida Gwaii’s Old Massett Village had been home to a number of totem poles, bristling up from the coastal landscape, facing out to sea. During visits to museums in Vancouver, Davidson had seen photographs of that past – a past which scarcely resembled his home in the 1960s, where no such totem poles still existed. 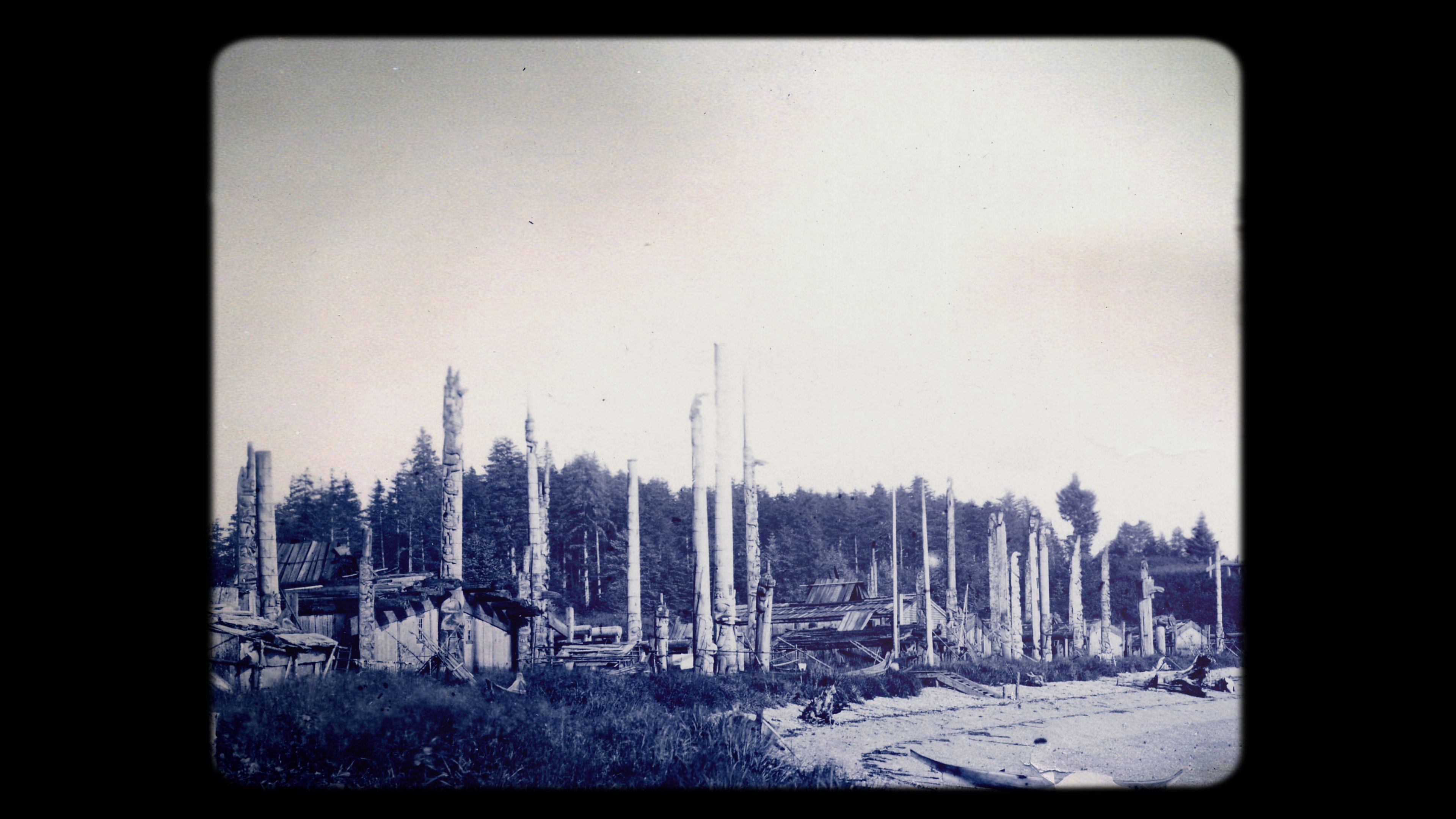 Massett Village in 1878 with its forest of totem poles facing the sea, the majority of which were razed and destroyed in the ensuing decades.
Courtesy National Film Board.

For Davidson, the absence of those towering carvings which had been razed and destroyed drove home the erosion of Haida ways of life more broadly; Haida songs, ceremonies, and culture had also been obliterated.

“I would go and visit the elders, and they seemed really, like, not connecting to anything,” he says. “I could feel the sadness, and I wanted to create an occasion for them to celebrate one more time.”

With help from his grandparents, his father, and his younger brother Reg, Davidson set out to carve his community’s first new totem pole in almost a century.

“On the 50th anniversary of the pole’s raising, Haida filmmaker Christopher Auchter steps easily through history to revisit that day in August 1969, when the entire village gathered to celebrate an event that would signal the rebirth of the Haida spirit,” reads the introduction to the film. 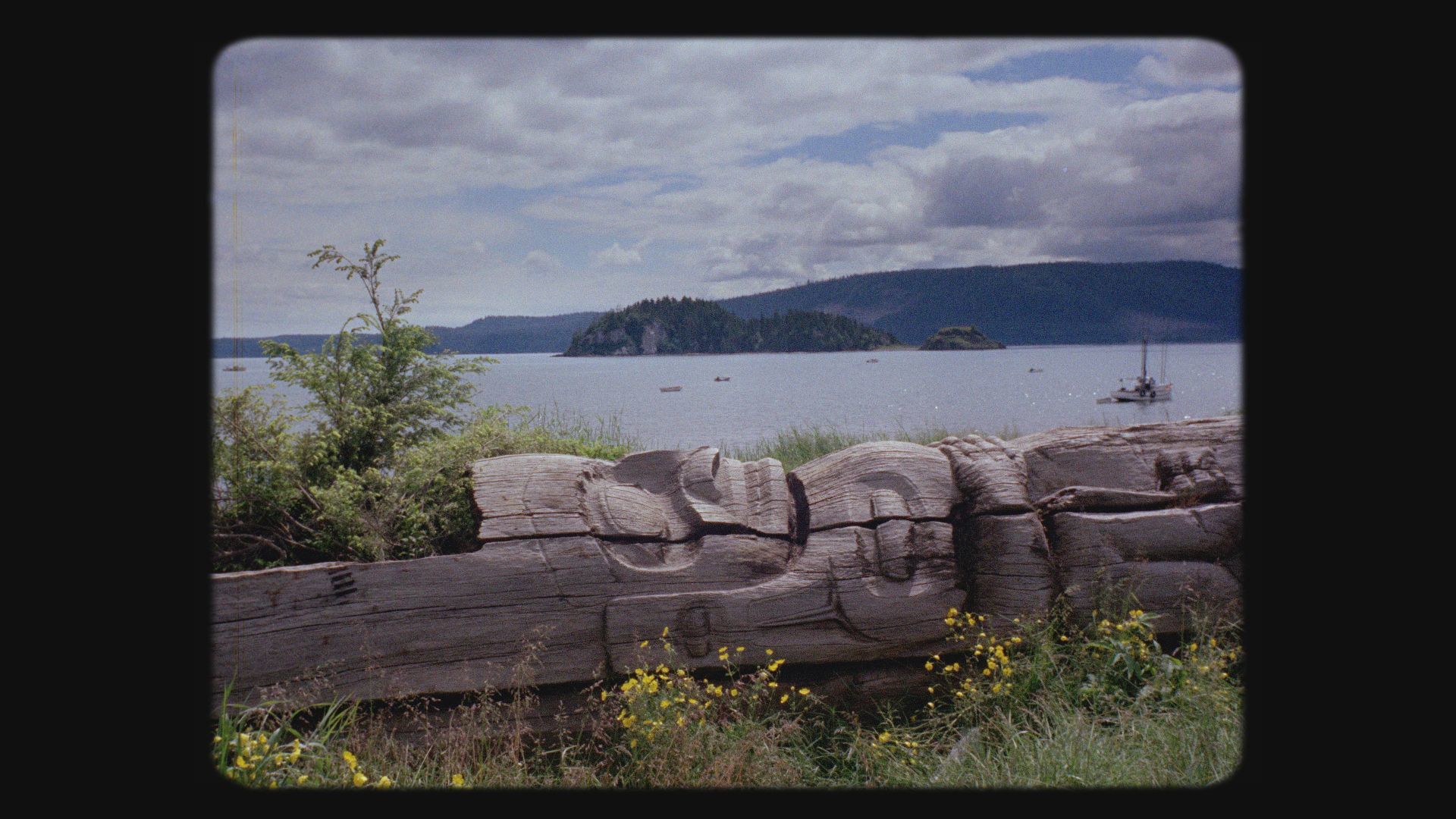 One of many fallen totem poles on Haida Gwaii, off the northern coast of British Columbia.
Courtesy National Film Board.

“Resplendent with original footage shot by what was then known as the NFB’s Indian Film Crew, Now Is The Time is filled with archival images, animation, and emotional interviews with Robert, Reg, and Haida scholar Barbara Wilson.

“The film’s bright, kaleidoscopic scenes show women dancing in their bare feet, men egging each other on, elders wearing paper headdresses, and children drawn in gorgeous watercolour hues. Everywhere is the sound of laughter and tears, as three generations of Eagle and Raven clan come together to raise the pole in the old way, inching it higher and higher, until it stands proud and strong against the clear blue sky.”

The film captures Davidson reflecting in his studio, smiling at the memory of the event which took place a half-century ago.

“I was just a young smart-aleck kid thinking I was going to teach the elders something, but it turned around,” he says. “It was the other way around.”

Now Is The Time (Waaydanaa) is showing as part of VIFF 2019 at Cineplex Odeon International Village Cinemas on Oct. 3 at 9:30pm, and on Oct. 10 at 8:30pm. Christopher Auchter will be in attendance at both showings. Tickets can be purchased by following this link.

A Message from Robert Davidson

With the release of Now is the Time, I wanted to take the opportunity to provide some context for the story of the pole raising that took place in Massett on August 22, 1969.

For several decades, Massett did not have any totem poles or art because of the restrictions from Canadian laws under the Indian Act, which was first passed in 1876. This Act was later amended to outlaw us from practicing our ceremonies, including our songs and our dances.

It has been 50 years since my brother, Reg, and I carved the totem pole for Massett. My family, including my parents, Claude and Vivian, Naanii Florence and Tsinii Robert, and Susan, was tremendously supportive throughout that time. My uncles, Alfred Davidson, Sam Davis, and Victor Adams, my aunties, and many Elders provided me guidance for the project and the celebration on the day of the pole raising.

Dad, of his own free will, walked the forest for two weeks looking for a suitable tree. Mom and Susan gave unending support throughout the summer. Audrey Hawthorn, then Curator of the UBC Museum, applied for and received a $3,000 cultural grant for this project. Naanii and Tsinii provided endless guidance and support and opened their home to host numerous meetings with the Elders to discuss history and what was involved in raising a totem pole. All of the preparation and consultation with the Elders took place during the summer at those meetings. Song and dance practices were held after the meetings, and Naanii even demonstrated one of the dances with a brown paper bag with holes cut out for her eyes because we had no masks. It was truly a spiritual experience seeing all the joy expressed through the Elders’ singing and dancing – these Elders who were all 70 years old and over. After school was out Reg helped to carve. Even though it was the first time he had ever carved, it was as if he had carved before. We worked 10-12 hours a day, six days a week most weeks.

The idea to carve and raise the totem pole in Massett was inspired by my friendship with the Elders of the day. When I moved to Vancouver, I saw the great art of my ancestors then I came home and saw no art in the village, because we had been muted and outlawed from practicing our ceremonies and way of life. I also sensed a feeling of sadness from the Elders, and I wanted to create a reason for them to celebrate one more time in a way they knew how. This motivated me to commit to carving the totem pole. There was never a question or doubt from my parents or grandparents that this could be accomplished.

The sun shone brightly on the day of the totem pole raising. It was like magic. The pole was raised as if it was an everyday event. We were all guided by a power greater than ourselves. Tsinii helped Dad to give direction to the pole pullers. After the totem pole was raised, people spontaneously began to sing and dance around the totem pole. Many of the Haida wore paper headpieces, and there were only two drums, one was a toy drum that my tsinii used. It was a celebration – a rebirth – we were able to reconnect with our spirituality once more. Many Haida from Skidegate and Hydaburg and yaads xaadee from out of town came to witness the pole raising and be part of the celebration.

That evening a potlatch was held in the community hall that was co-sponsored by the Massett Band Council and the Davidson family.

Christopher Auchter grew up roaming the beaches and forests of the Haida Gwaii archipelago off Canada’s West Coast, and his art is rooted in the land and stories of the Haida people. Auchter’s art practice is fuelled by his close connection to the natural environment, his adventures in forestry and commercial fishing, and by the colourful people with whom he has lived and worked. From early on, he recorded his feelings and impressions as images, and today his filmmaking serves the same function.

Auchter studied media arts at the Emily Carr University of Art and Design (Vancouver, British Columbia) and graduated with honours in computer animation from Sheridan College in Ontario. His goal is to create films that are as engaging and entertaining as the many people and environments that have inspired him, to help facilitate genuine contact between the Haida people and the global community.