Take a look and you’ll notice the articulated B-line buses we are used to seeing wrapped in advertising are now covered in art, disrupting the visual landscape of Vancouver via transit. Developed in collaboration with TransLink, the project How far do you travel? simultaneously enhances the transit experience with art while inviting the public to consider how images carrying meaning and memory from one place to another. Contemporary Art Gallery curator and ECU sessional faculty member Kimberly Phillips discussed the process of selecting artists, how the project came to be, and what the public has to look forward to. 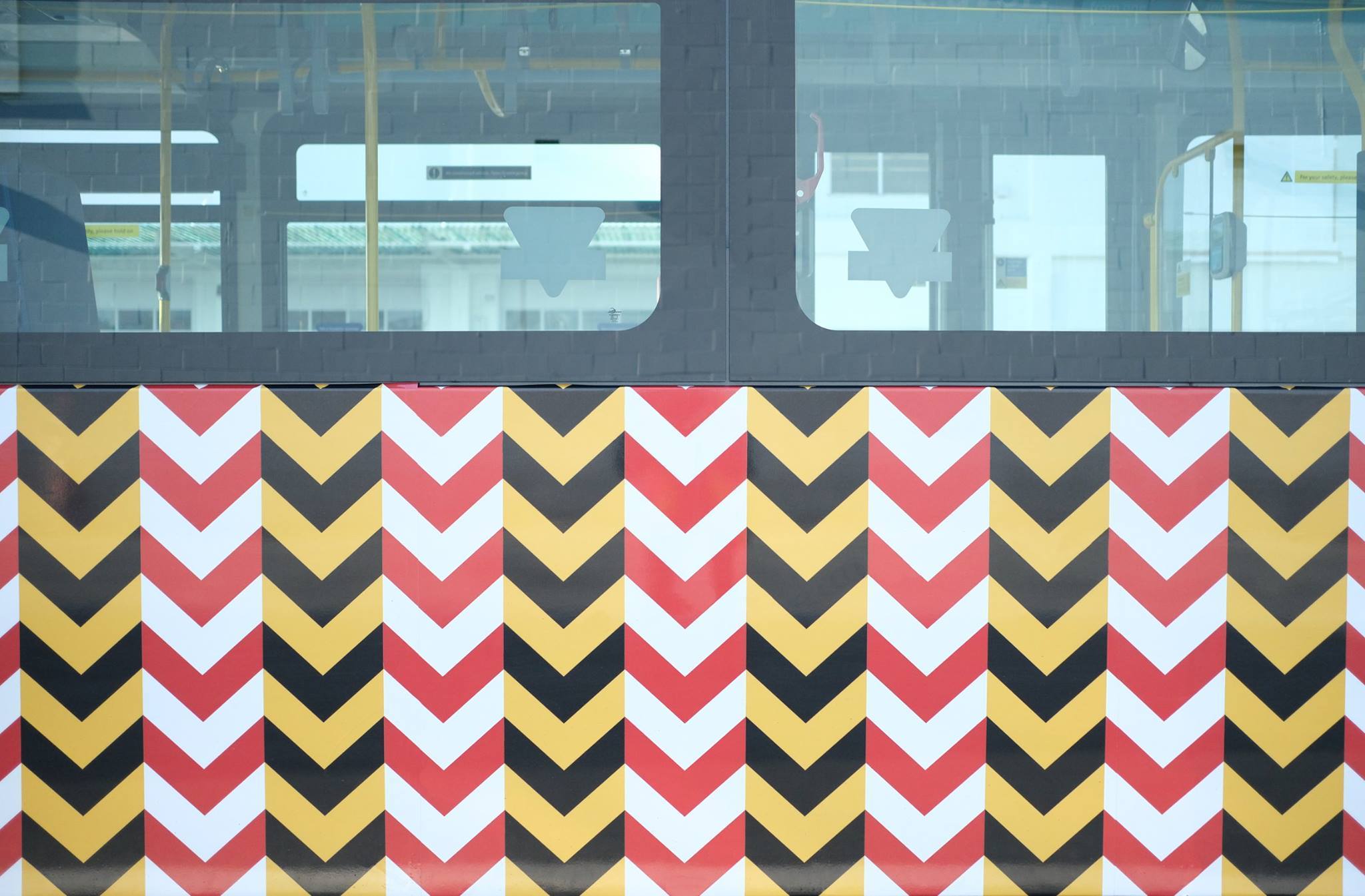 When considering what artists would be appropriate for the work, Kimberly thought outside the box. “The project seemed deceptively simple at first – it’s a bus, we’ve all seen wrapped buses,” she said. “The challenge for me was to try and think about what could be a conceptual premise to carry the work while also considering specific artists who are attentive to those ideas in their practices.” The word that thrust the work forward was ‘commute,’ whose etymological origins mean to transform or change.

“I looked for artists who use images in their work and are aware of how they move through time and space,” said Kimberly. “I drew from artists I was familiar with who I knew worked similarly with the force of how images move around.” After considering artists who worked in that way, Kimberly also had to address whether their work could be scaled up and translated on to a bus wrap, and find out who was up to the challenge.

Erdem Taşdelen (MAA 2010) is one of the five Canadian artists whose work is featured on the buses. Erdem’s piece, Essentials of Psychological Testing, is dark blue with a collage of imagery in white line work. “After the process began, I quickly realized that translating the work from its existing state essentially meant making a new work,” said Erdem. “The shape of a bus wrap is completely different from anything I’ve worked with before and it wouldn’t have made sense to try and replicate the original.” 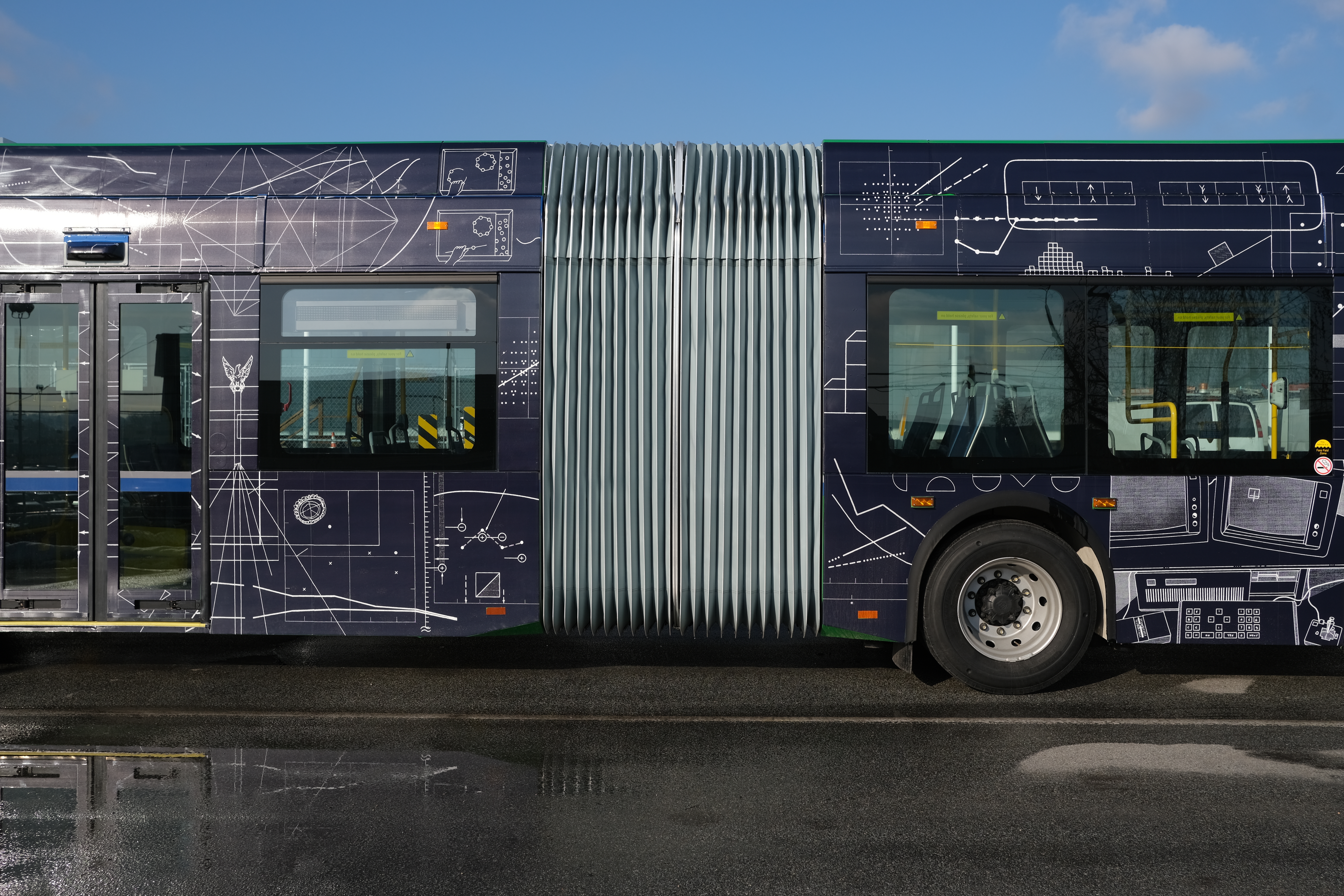 The collaged images are adapted from his earlier series The Elements of Discontent (2015). “The images that feature in my collage are taken from a book originally published in 1949, and I used the fifth edition, from 1990,” said Erdem. “I think it’s really quite easy to identify the imagery as belonging to another time; if this sort of imagery were to feature in a book published today it would have a very different aesthetic. But 1990 is not so far in the past either; it’s a time I can remember quite clearly myself, and material that was around in the 90s hasn’t completely disappeared from our visual landscape yet.”

In referencing the theme of movement through time and space, Erdem’s work prompts each viewer to have a different experience. “There’s a different relationship to the images based on their age and I find that quite interesting,” said Erdem. “How do we make sense of material that’s past its time but still lingers? In the context of this particular imagery, does it perhaps lose its scientific authority as the aesthetic becomes quaint over time?” 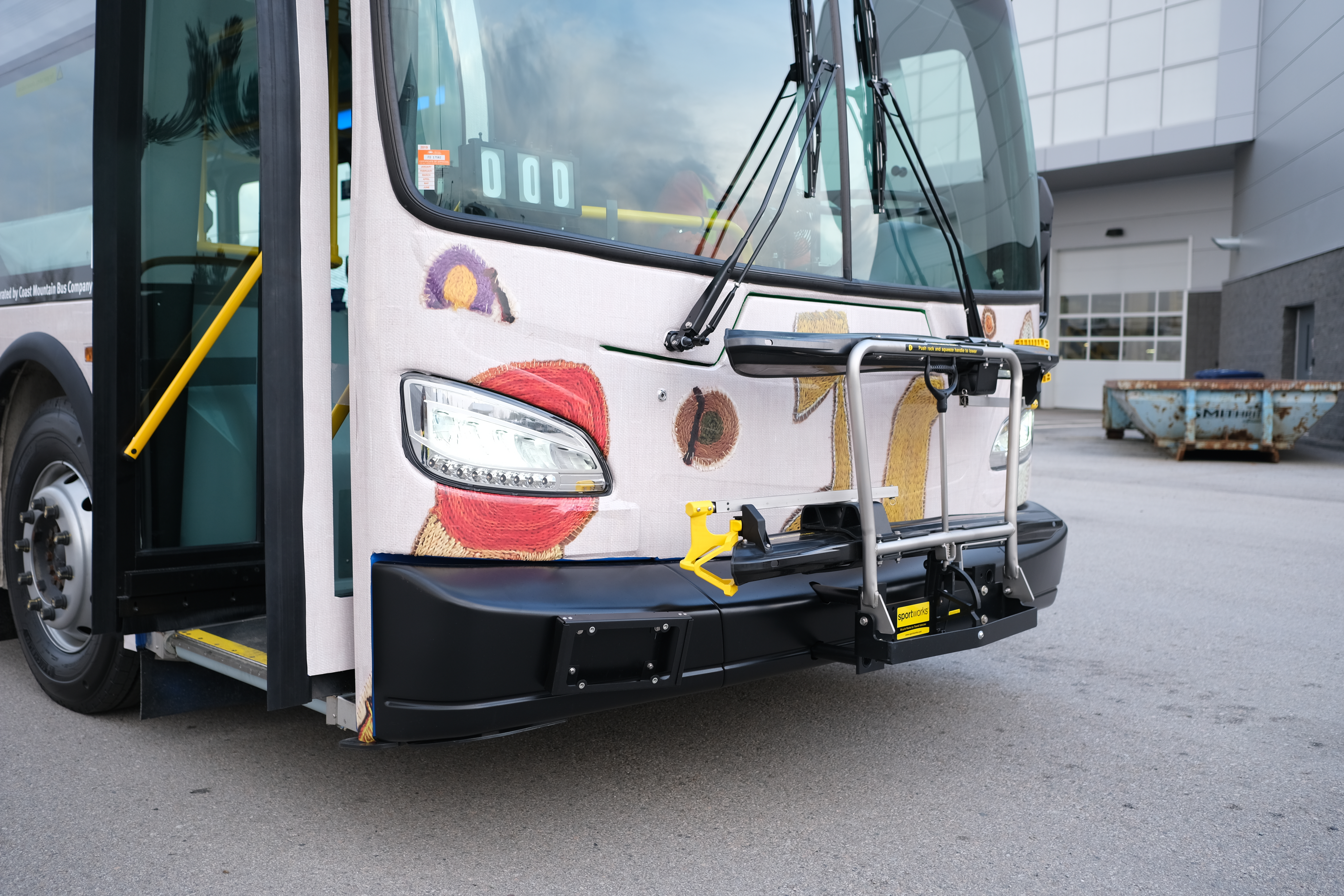 Abandoned Details 4 (2018), made with the assistance of the Esker Foundation
by Anna Torma. Image courtesy of Translink.

The entire group of artists involved deal with very complex subject matter while still providing an accessible entry point into interacting with art, simply by being in the public sphere and a continually shifting context. “The key to really strong public art is that it’s open enough that it can engage anyone from a young child to someone far later in life,” said Kimberly.

Erdem echoed the sentiments of designing work at this scale for the public. “The scale was a productive challenge,” he said. “I needed to consider that all the components that make up the composition will need to be viewed both from near and afar. Once I sorted out all these issues, though, it was really fun to play around with the material.” Seeing the buses from near, far and multiple times turns out to be one of the most interesting aspects of the project. “You have a chance to see the buses more than once and in different contexts, allowing you to develop your own relationship with the material,” Kimberly explained. “There are thirty buses which is actually quite a lot.” Each artist’s work is featured on six buses, which circulate throughout the whole city.

The other artists who are featured are Diyan Achjadi (associate professor), Patrick Cruz (BFA, 2010), Rolande Souliere and Anna Torma. Each artist brings a unique experience to the project as well as public programming relating to the project. “We’ve approached this like any other group exhibition and have brought the same weight of programming to it,” said Kimberly. While the delivery of the programming is outside a traditional gallery space, it’s been treated like any other offsite exhibition. 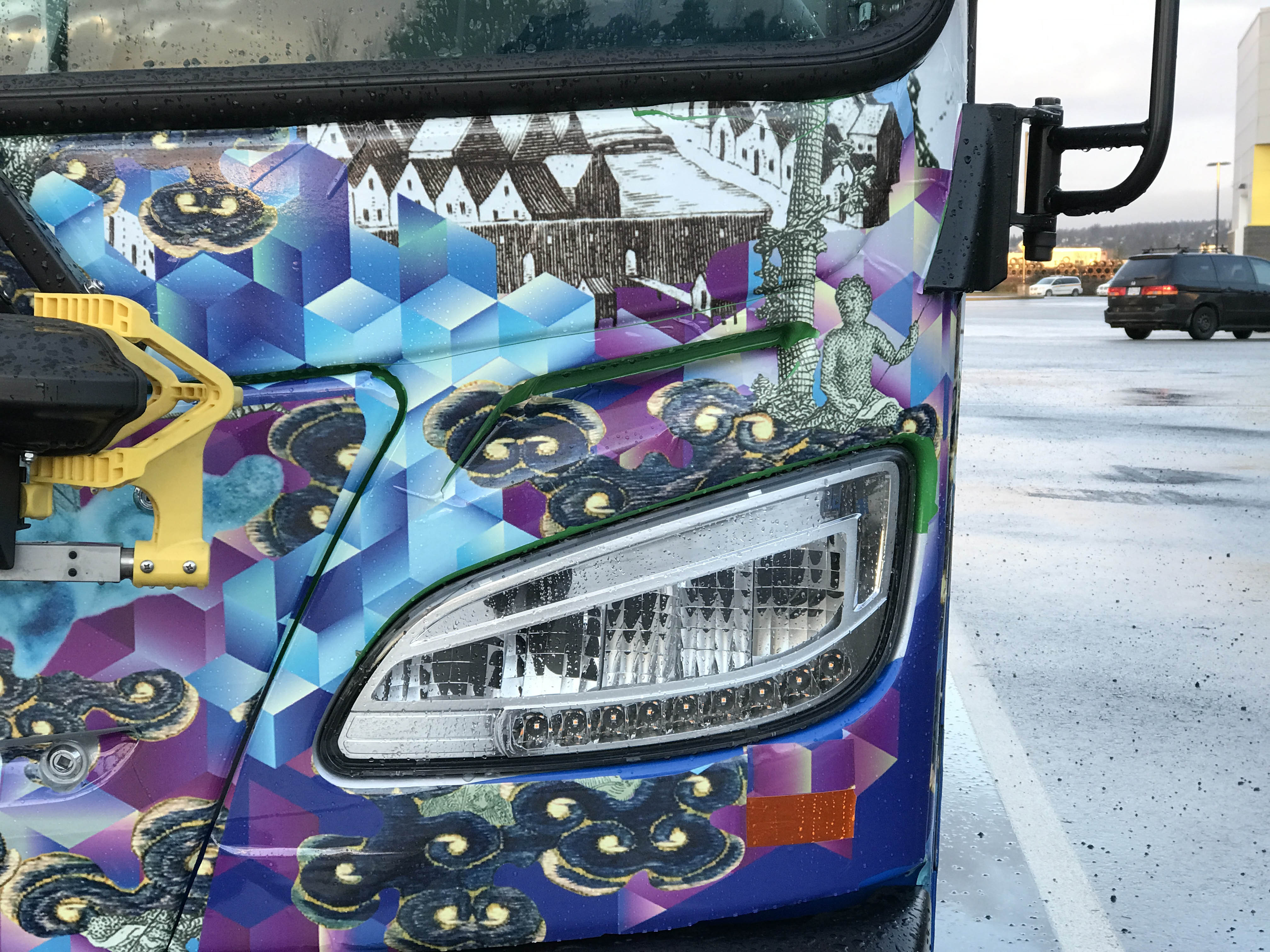 One of the recent events was Diyan's artist talk on a moving bus. “I really wanted to have programming happen on the bus,” said Kimberly. “It didn’t seem interesting to have people sitting in the gallery for an artist talk when the work is circling around the city streets. TransLink made this happen for us, arranging for the artist’s wrapped bus to be outside the gallery whenever we have programming.”

The buses pull up right outside the gallery, allowing visitors to board in time for the scheduled talks and performances. The buses have predetermined routes that go through some of the more visually interesting areas of the city, around the downtown core, and even into Stanley Park. “It was really surreal for Diyan and I. During our conversation, I would look back and see people gazing out the windows and wonder if they were listening,” said Kimberly of the experience. “But they said it was cool – like listening to a podcast on the bus. It was a wonderful experience.” Check out the video recording of Diyan’s artist talk. 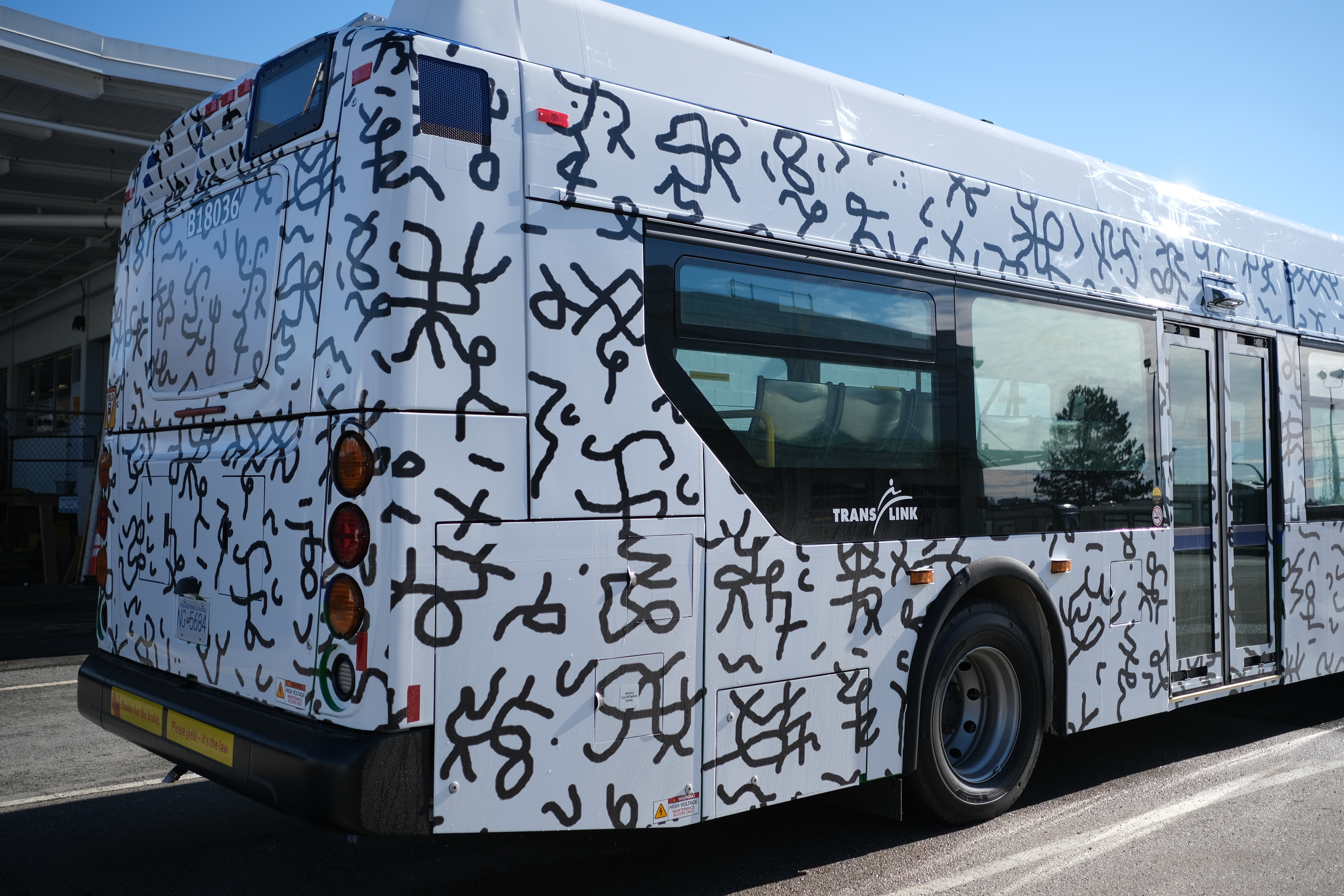 As part of the ongoing programming throughout the year, Erdem will be previewing his new and never-before-seen body of work, The Characters (2019), through a series of short readings aboard his wrapped bus. “I thought it might be fun to try and read some of these scripts myself on the bus,” shared Erdem. Echoing Kimberly’s sentiments about the delivery, Erdem shared that it would be like a live podcast being listened as the bus tours the city. Without giving too much away, we can say that the project takes its inspiration from a text written by Ancient Greek plant biologist Theophrastus. “This text that is considered to be the first cataloguing of archetypes in history,” said Erdem. “I’ve taken the 30 negative personality types that Theophrastus wrote about and developed each of them into characters by writing scripts for monologues.”

How far do you travel? captures both the simplicity of the project and the ambiguity involved. “If it’s an open ended question, who is it being asked to?” explained Kimberly. “But really, the question is being put to the artwork because the complexity of the images is that they are dragging all kinds of history, ideology, and memories with them through the city.” You can experience the moving artwork on your commute throughout the city until the end of 2019.

How far do you travel? Upcoming Events 2019

Provided by the Contemporary Art Gallery in partnership with TransLink

In this sidewalk tour linking CAG, Yaletown-Roundhouse Station and the artist’s wrapped bus, Rolande Souliere speaks about the three inter-related projects comprising her solo exhibition and her contribution to How far do you travel?

Erdem Taşdelen reads from The Characters aboard the moving bus

In this unique event, exhibiting artist Erdem Taşdelen will preview a new and never-before-seen body of work through a series of short readings aboard his wrapped bus as it tours through different neighbourhoods of the city.

Join CAG and ArtStarts for a very special Family Day event celebrating How far do you travel? and the work of exhibiting artist Anna Torma. Families will be invited to enjoy creative activities across three sites: the Contemporary Art Gallery, ArtStarts and aboard a Translink bus graphically wrapped in Torma's work. Inspired by Torma’s practice, activities will include embroidery, storytelling and more.

Sound Performance with Patrick Cruz aboard the moving bus

Exhibiting artist Patrick Cruz creates for an immersive sonic experience on the turntables, turning visual art audiences into listeners aboard his wrapped bus as it tours through the city.

Established in 1971 the Contemporary Art Gallery is the longest-standing free public art gallery in Vancouver dedicated exclusively to presenting contemporary art. By the early 1990s the program expanded providing some of the first institutional exhibitions for many important Vancouver artists, including Brian Jungen, Geoffrey Farmer, Germaine Koh and Steven Shearer. The Contemporary Art Gallery is a publicly funded institution, generously supported by the Canada Council for the Arts, the City of Vancouver and the Province of BC through the BC Arts Council and the BC Gaming Policy and Enforcement Branch.

Erdem Taşdelen is a Turkish-Canadian artist based in Toronto. His work has been shown in numerous solo and group exhibitions internationally and reviewed in publications including Artforum, Flash Art, ArtAsiaPacific and Canadian Art. Taşdelen was awarded the Joseph S. Stauffer Prize in Visual Arts by the Canada Council for the Arts in 2016 and the Charles Pachter Prize for Emerging Artists by the Hnatyshyn Foundation in 2014.