The new animated short film The Butterfly Affect, which tells the story of a worm trying to make it in a world built for butterflies, made its world premiere last month at the Spark Animation 2019 Film Festival in Vancouver.

Directed by artist, animator and ECU alum Stephanie Blakey (BMA, 2010), The Butterfly Affect is also the inaugural offering from a new initiative called Five in Focus, developed in partnership between Women in Animation and Women in View to advance gender equity in the animation industry.

Stephanie got involved with the film last year, when she was nominated to take on one of five key creative positions in which women have historically been underrepresented. Five in Focus provided Stephanie and her colleagues — writer Jen Davreux, producer Amanda Konkin, animation director Kaitlin Sutherland, and art director Maisha Moore — with robust mentorship and financial backing to write, develop and produce a short animated film.

The result is what one viewer has called “a beautiful short film with a great message of inclusion and acceptance.” The initiative itself also saw Stephanie and her teammates speak on a panel at the Annecy International Animated Film Festival in France this past summer. And they’ll soon be heading to California to the CTN Animation Expo to show the film and talk about the Five in Focus program.

"Having fewer women than men in hiring positions means ... we see many of the same stories over and over."

Stephanie says Five in Focus has brought her a world of opportunity, while working on the film itself was tremendously illuminating.

“Me and four other women spent the last year coming up with ideas, working with industry mentors, solving problems and learning so much from one another — like how to form a cohesive pipeline,” she says.

“As director on the project, I received invaluable practice working with everyone and giving feedback to help support my vision of the film. I worked with voice actors and their voice director, the sound designer, the editor, the colourist — the list goes on … At the end of it all, we have our film, The Butterfly Affect! The world premiere at Spark was wonderful and I'm neck-deep in film festival submissions. I'm so proud of what we made and I can't wait to show the world.”

The Butterfly Affect’s warm aesthetic is somewhat familiar territory for Stephanie, who told Hollywood North Magazine she has a love of tactile, analog forms of animation. In fact, her previous film, The Last Resort, was a paper cut-out animated comedy horror (and also happened to be female-led).

“That’s something that I spoke to Maisha Moore, the art director for The Butterfly Affect, about: how to get a similar feeling in what we knew was going to be a completely digital film, but to still have that kind of warmth of hand-made ... I guess creation,” she told HNM.

“So for The Butterfly Affect, we went with almost like a silkscreen printing technique, or kind of attempt at that style digitally, which I feel gives the film a lot more warmth.”

The film's promotional poster is a work of original cut-out art Stephanie produced herself.

In addition to offering professional opportunity, Stephanie says initiatives like Five in Focus — and groups like Women in Animation and Women in View — are laying the groundwork for new voices in storytelling, and new stories to be told.

“It's not always easy to break into the animation industry — especially in more influential positions — if you're not a man,” she says. “Having fewer women than men in hiring positions means it's slightly less likely for folks like me to be hired, which means we see many of the same stories over and over.”

Her advice? If you have a tale to tell, don’t wait.

“If anyone reading this is interested in the program, do it! Apply, if you can! The world needs to hear your stories!” 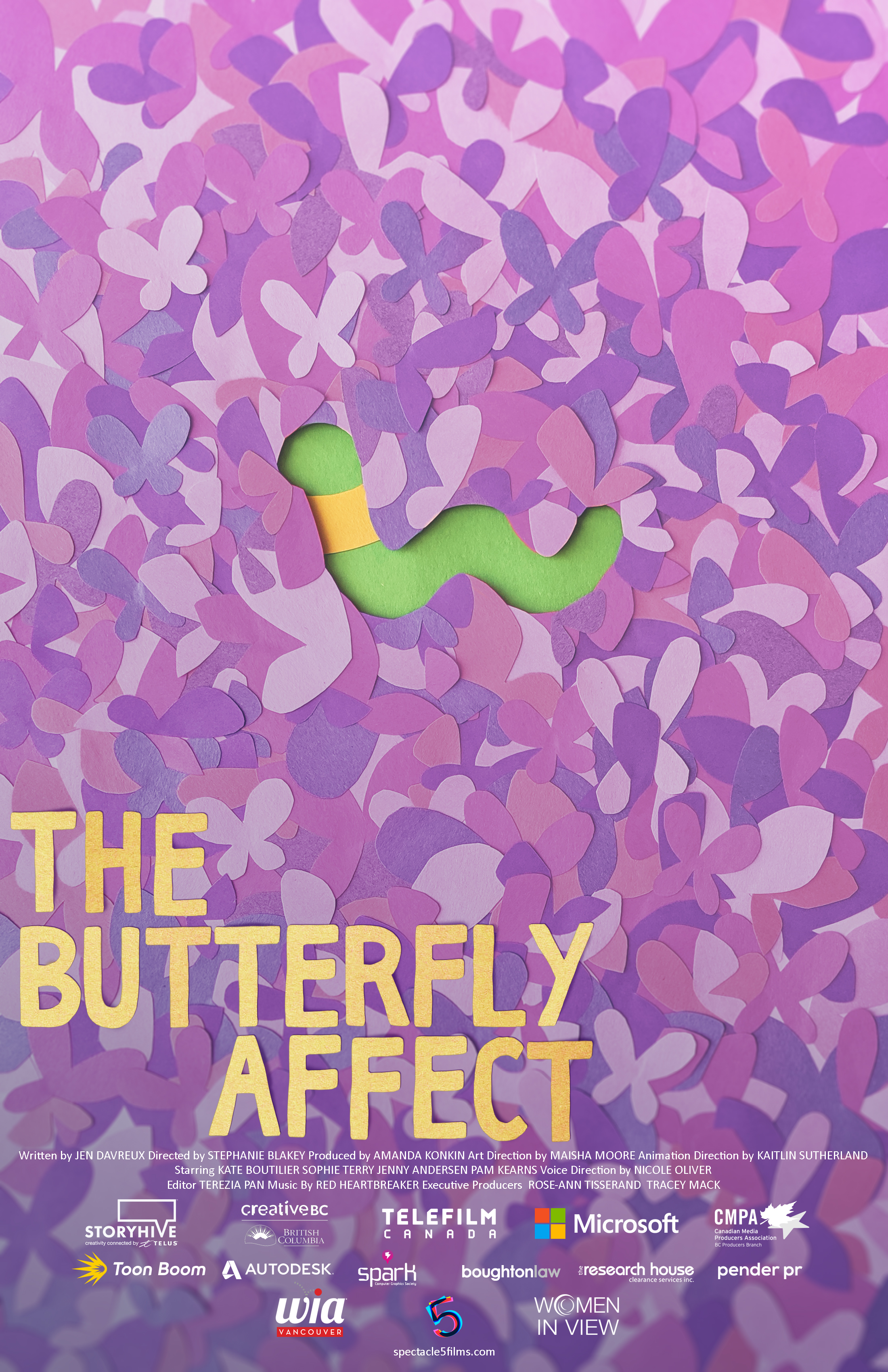