The Alberta Craft Gallery-Calgary is hosting the work of Edmonton Ceramicist Benjamin Oswald as part of its monthly Spotlight Series. The pop-up style display provides a unique opportunity to see and invest in the work of accomplished and esteemed Alberta Craft artists.

Find his work at the Alberta Craft Gallery-Calgary from Oct. 10 to Nov 2.

Benjamin Oswald's career started with sculpture and has moved into the realm of ceramics, often blurring the lines between art, design and contemporary craft. Oswald was the winner of Western Living Magazine's "One to Watch" in 2018, he is a teacher with the Edmonton Public School Board, and is currently an MFA student at Emily Carr University.

Alberta Craft Council: Hi Benjamin! Who are you and what do you do?

Benjamin Oswald: My name is Benjamin Oswald and I'm a ceramicist and sculptor based in Edmonton, AB. My works are primarily made in porcelain that are slipcast, hand thrown or hand built.

What theme(s) or ideas(s) do you pursue in your work?

I make art in the blurry intersections between art, design and contemporary craft. Like many ceramists, I consider the vessel as a metaphor for the human condition. I like to consider what's inside and outside a form as well as making arrangements and rhythms of multiple objects in space.

I am inspired by nature with all of its textures and forms and have been using a modernist lens with minimalist aesthetics to think out ideas and observations. In my view, form and shape have greater relevance than function, and I frequently allow the material to guide during making and derive meaning later on. 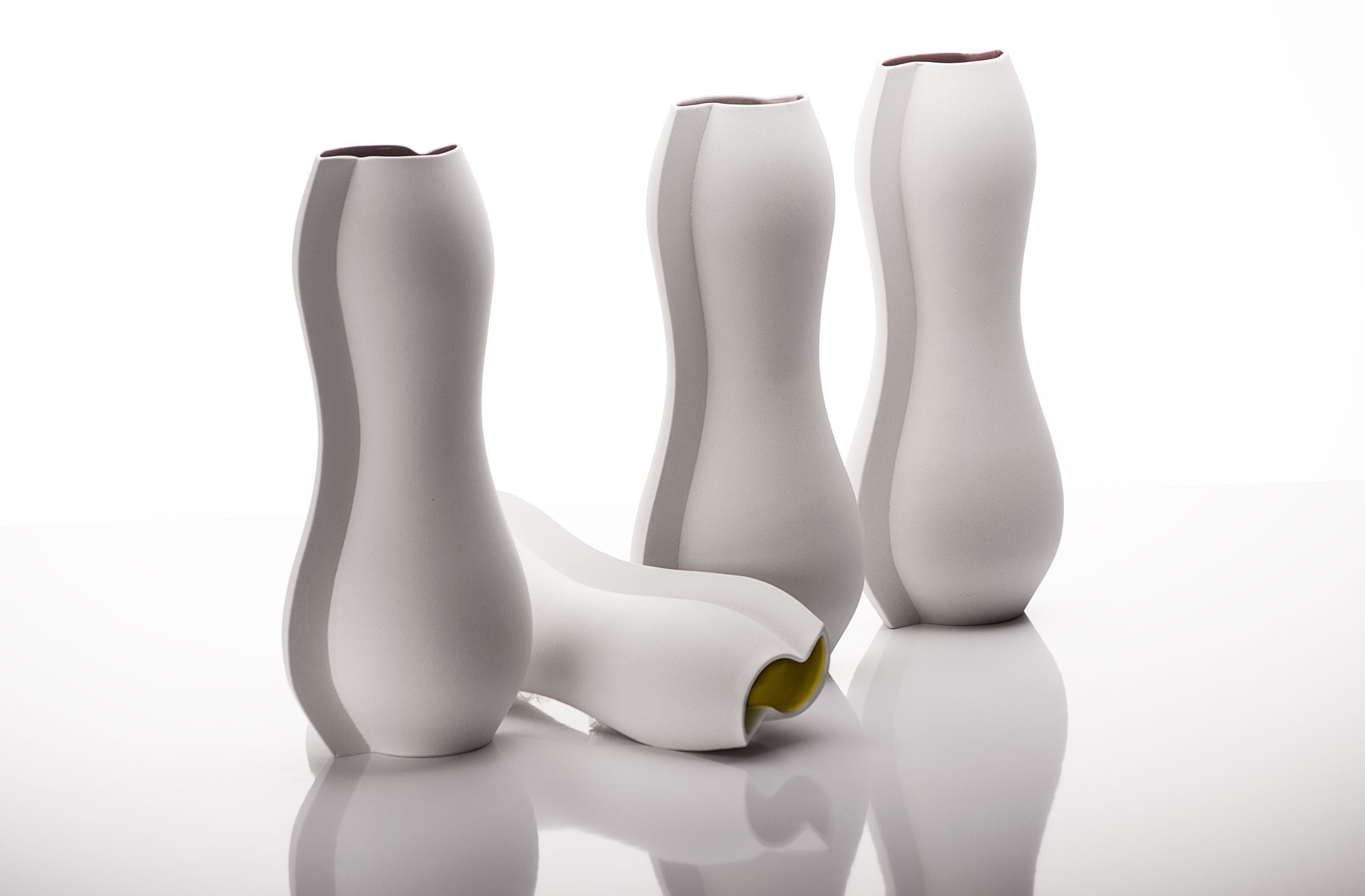 Some of Benjamin Oswald's vessels.

Who taught you your craft?

I studied mold making and slip casting with Sasha Wardell in Wiltshire, England. I am also working on my MFA at Emily Carr University of Art & Design in Vancouver.

How has your practice changed over time?

I started sculpting in the early '90s influenced by several British modernists and using stone as my medium of choice. I still have over a ton of beautiful white marble at my home studio (which I will revisit sometime in the future). In 2007 I began teaching a ceramics course and decided to switch my practice up and move into ceramics. Much like a traditional potter, I was hand throwing and glazing earthenware bowls and vases. As time past, I began to search out methods to create more contemporary designs, which lead me to porcelain, mold making and slip casting. I soon found I could use units of designed objects to compose abstract shapes, forms and compositions in addition to my series and editions of vessels. 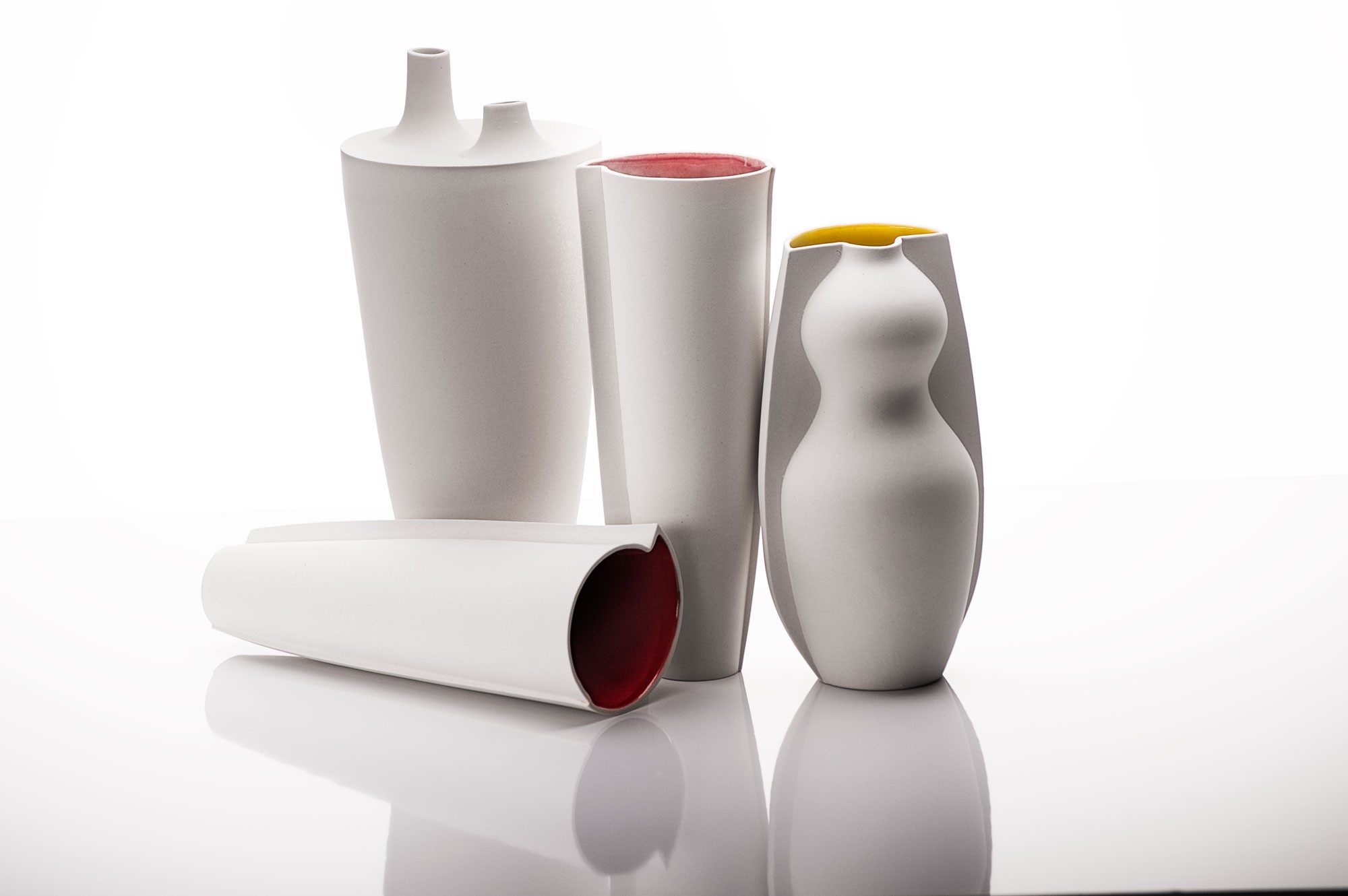 Some of Benjamin Oswald's vessels.

What is your favorite thing to make?

For me, the product of work comes second. My primary joy comes from work itself. Not to sound confusing but I'm referring to work as a noun or work as a verb. Work as a verb is where I am happiest.

What music are you currently listening to in your studio?

I usually run streamed playlists of music while in the studio. Lately its classical Baroque, ambient electronic or a miscellaneous Indie playlist

This article was originally published by the Alberta Craft Council.