“We knew design was important, but I don't think any of us understood how much of a difference it makes until we started working with Richard,” says Steph Sharp, CEO of Vancouver-based tech company 3DQue. “It's huge.”

In April 2020, Emily Carr University MDes student Richard Kennedy joined 3DQue’s engineers and entrepreneurs as the company’s first MITACS-funded design intern. 3D-printing typically requires a technician to be present to monitor the work, ensuring adjustments are made where needed. This means the output of any 3D printer is limited by the stamina of its human attendants. 3DQue builds software and equipment to automate the 3D printing process, meaning a printer that can theoretically run day and night until a job is done.

Recruited for his background in 3D printing and design, Richard spent most of his first month on the job building and calibrating printers so the company could help produce personal protective equipment (PPE) and medical supplies for the fight against COVID-19. But these routine tasks quickly led to more experimental work, as Richard moved from installing printers to setting up the prints themselves.

The power of design thinking

“A designer who understands 3D printing is critical,” says Steph. “We have seven 3D printer guys here and as clever as they all are, they're not at Richard's level of design.”

She recalls one design Richard worked on — a T connector for a nebulizer — which was particularly challenging to print because of its shape. That’s because 3D printing happens in layers, printing one thin film of plastic on top of another until the final shape is born. This iterative process means items with an overhanging component—like the top bar of the “T” for the nebulizer joint — are impossible to print without using supports to prop it up. Those supports add costs to the manufacturing process. They also use up extra material, which then has to be cut away with a sharp blade by a technician after the part is finished printing.

“So, what did Richard do?” Steph recalls. “He literally just turned it.”

Normally, T-shaped parts, like this one, have to be printed with large supports under both sides of the “T” (left). In Richard’s adapted design (right), the joint is printed at an angle, reducing the size of the supports.

“That's the power of design,” Steph says. “It seems like such a simple solution, but you have to think so differently.”

“How we interact with our products and objects in the world as designers is very different from people from other fields,” Richard agrees. “It’s a different mindset when approaching problems.”

But as much as Richard brought a new perspective to 3DQue’s work, the internship has also shaped the way Richard is approaching his research.

“What I really admire about 3DQue is that they’ve brought free space for experimentation into their own facility,” says Keith Doyle, an associate professor at ECU and Richard’s graduate supervisor “Some of what Richard was able to do was really play a serious play that works into the push-pull of innovation.

Finding a third space for innovation

Richard’s master’s research explores the intersection of computational design and traditional craftsmanship, like pottery or woodworking. It builds on the work he’s done throughout his degree at ECU’s Material Matters Research Centre. The Centre, which Keith co-directs, is interdisciplinary and collaborative, with a long history of industry partnerships and exploratory research.

“We work with industry on developing new and novel workflows that integrate 3D printing and advanced manufacturing, as well as faculty-led research at the intersections of craft and digital technologies,” Keith says. “One of our key interests is engagement: through curriculum, through graduate research, and also through that third space which is outside of the credit system—individual agency.”

For Richard, that third space has been his internship. “I was able to do things that are related, very heavily and very directly, to what my research was engaging with,” he says. “I was able to take something that, in my research, was a very theoretical or speculative proposal and really see it in a very real sense.”

At the core of Richard’s thesis are questions about how computational manufacturing methods, like those used in 3D printing, can be combined with artisanal production. “There's this romanticism that exists around craft practices and this old-world version of going to a local artisan who makes a product to fit a specific need,” he explains. “It is obviously a bit absurd in today’s society that everything in your life would be made by hand by somebody you met locally. But there is some version of that which is a possibility with 3D printing.”

One approach to making that possibility a reality is what’s known as parametric modeling. Through this process, computational designers can lay out the groundwork for all-but-print-ready products, but leave just a few design choices, or parameters, open for customization. Those open parameters can later be defined by other makers, allowing manufacturers with limited computational expertise to tailor products based on their individual needs. 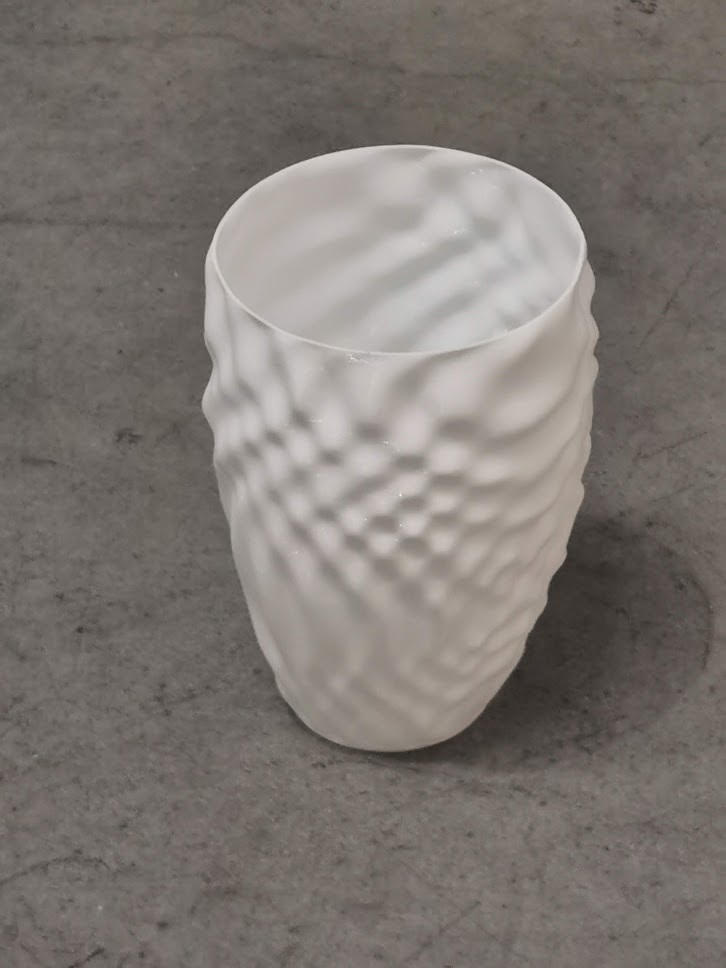 Richard’s 'Ripple Vessel' features an experimental design that can be customized to create unique 3D printed bowls, vases, cups, and other ceramics. Creators can explore possible customizations and create their own print at ShapeDriver.com.

“This is the thing that's really cool,” Richard says. “You can create objects that are completely unique, and you can create them at a fairly rapid and automated process.”

Unlocking the potential of parametric modelling

Richard had the chance to apply this approach at 3DQue when the team started producing face shields for COVID-19. 3DQue had started printing the shields using a design they’d found online. It was solid and functional, but it wasn’t perfect: it took about 75 minutes to print a single shield and the final product didn’t fit everyone on the team comfortably.

Again, Richard made some minor adjustments to the design, reducing the time it took to print and creating options in different sizes. But beyond these modifications, he also applied lessons from the parametric modelling he’d been studying at ECU, enabling the team to print serial numbers directly onto the face shields.

Adding these unique identifiers makes a product traceable and, ultimately, recallable — which is important for any consumer product, but especially for medical equipment. “If you put a product out into the world and it fails, you need to be able to trace it back to the manufacturer,” Richard explains. “You need to have numbers on every single one that comes out.”

“As far as I know, it was the first time in the world that this had been done,” Steph says of Richard’s serialized redesign. “Not only did it make it more compliant from a regulatory perspective, but it also made it faster to print, which is cheaper for a manufacturer. He brought the material down by two grams, and then he made it more comfortable for the end user. It was pretty innovative.”

Richard isn’t quite sure where he’ll end up after his internship ends, but he’s looking forward to putting more of the ideas from his master’s research into practice. “The big thing about working with 3DQue has been the practicality of it, the realization that it’s possible,” he says. “It's not just a pipe dream.”