It’s got four legs, weighs 9,000 pounds, stands nearly two storeys tall and, if its creator has his way, will be the next evolution of human-machine sports. Just don’t call it a robot.

The Furrion Exo-Bionics “mech” suit, named Prosthesis, is based on an idea that has set imaginations ablaze for decades. But until recently, it was an idea stuck in the fictional worlds of stories such as “Avatar,” “Aliens,” “Pacific Rim” and “Gundam.”

Which makes standing next to one in a warehouse just off of Vancouver’s Great Northern Way a disorienting experience. It looks impossibly huge, and, despite its stillness, feels as if it could leap into action at any moment.

Jonathan Tippett, the man behind the machine, assures me it will not. That’s the difference between a robot and a mech, he says. A robot is meant to be capable of operating on its own. A mech, on the other hand, needs a pilot. 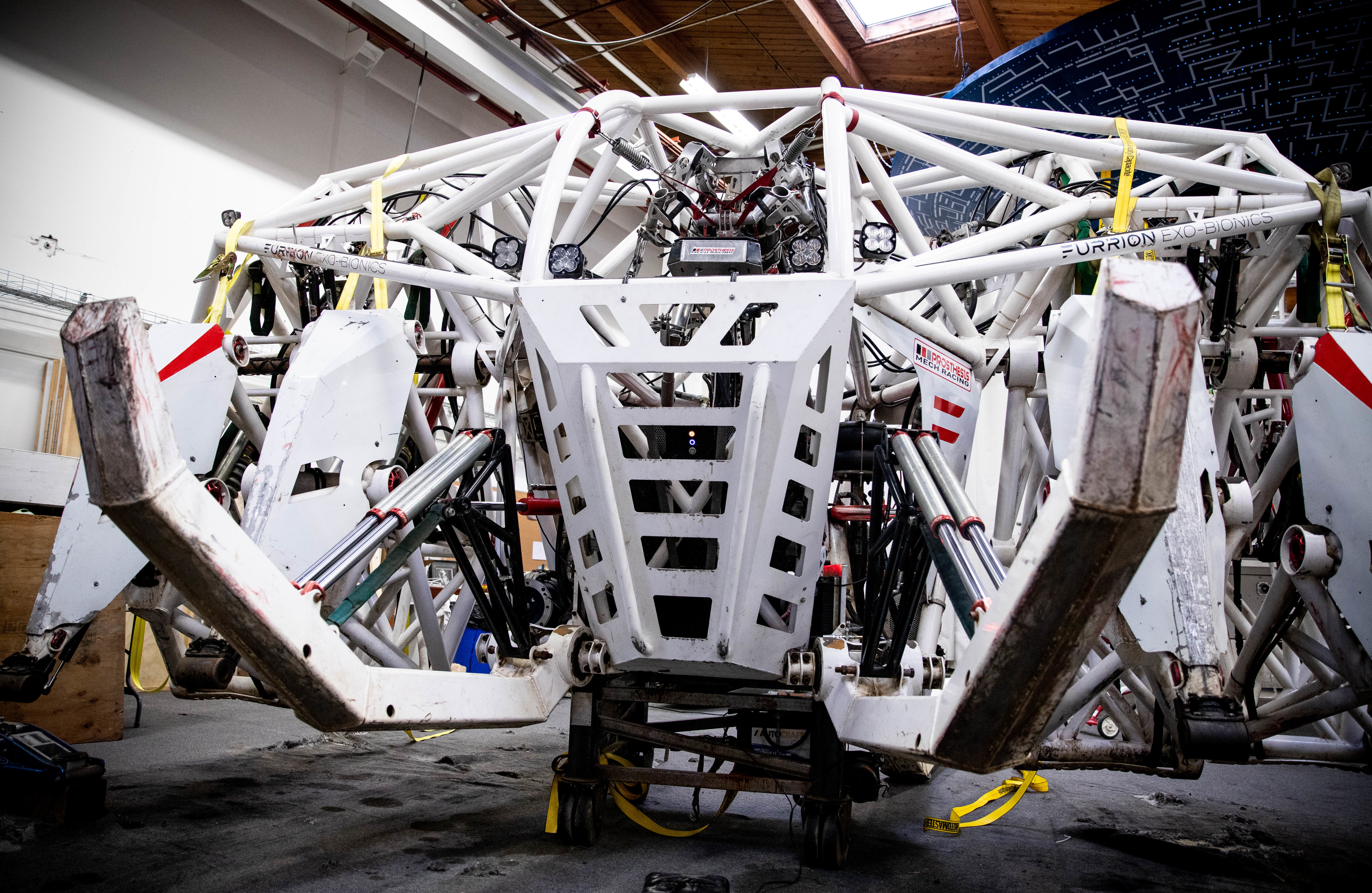 Prosthesis, the Furrion Exo-Bionic mech, gets a tune-up in the eatART warehouse at the Centre for Digital Media on Great Northern Way.

“It has no self-awareness, no gyros, no autonomy,” Jonathan, the co-founder and CEO of Furrion Exo-Bionics, says. “It has no ability to walk or balance by itself. It looks like a robot because it’s somewhat anthropomorphic, and it’s anthropomorphic because it’s built around the pilot. Ironically, the fact that it’s centered around a human pilot ends up making it look like a robot.”

Winter and spring 2019/20 saw Jonathan and his team stashing Prosthesis at the eatART warehouse at the Centre for Digital Media on Great Northern Way while tune-ups and design work took place. But as the pandemic swept the globe, the pressure to keep the project alive has intensified.

Furrion Exo-Bionics recently launched a fundraiser to reach their next goal — training a new cohort of mech pilots to inform the design of second-generation mechs, setting a foundation from which the sport of mech racing can begin to take shape and grow. As a bonus, pledges to the Alpha Mech Pilot Program Kickstarter can earn supporters a chance to pilot Prosthesis themselves.

“Having achieved a sufficient level of performance and safety from the technology, it is time to bring our attention to developing the sport,” Jonathan writes of this latest development. Recently, Cassie Hawrysh, former Team Canada National Champion Skeleton Racer, became the first in a series of pro-level athletes being invited to help develop the pilot training program.


Meanwhile, any human pilot, in order to perform at their best, needs to understand their machine. Currently, the beating heart of the zero-emissions mech is a proprietary lithium ion battery system. But its many moving parts involve a number of machine systems, all of which need to be monitored. Which is why students and staff from Emily Carr University have joined the team.

In collaboration with Basically Good Media Lab Director Maria Lantin, Faculty Lead Ben Unterman guided a team of students through the unprecedented task of prototyping a “heads-up display” (HUD) for the mech prototype. Which is no small feat. The team was essentially tasked with designing an instrument panel for a one-of-a-kind machine; Prosthesis is the only fully-functioning, large-scale exo-skeletal mech currently in operation, and holds the Guinness World Record for “largest tetrapod [two pairs of limbs] exoskeleton.”

The team’s work is also critical to advancing the project; an effective HUD will gather all of the mech’s self-reporting into one area, in the pilot’s natural field of vision — an upgrade Jonathan says will bring the pilot into more intimate contact with the limits and capabilities of the machine.

“The instrumentation will tell you when you're running the machine efficiently, and it will tell you how close to the limit of its ability you're pushing it,” Jonathan says. “Having better visibility on that means we can push it harder, which means you can train longer and harder. When you don't know what's happening, how hot things are, how close the batteries are to carrying too much current, you just have to be conservative and you can't push the machine.” 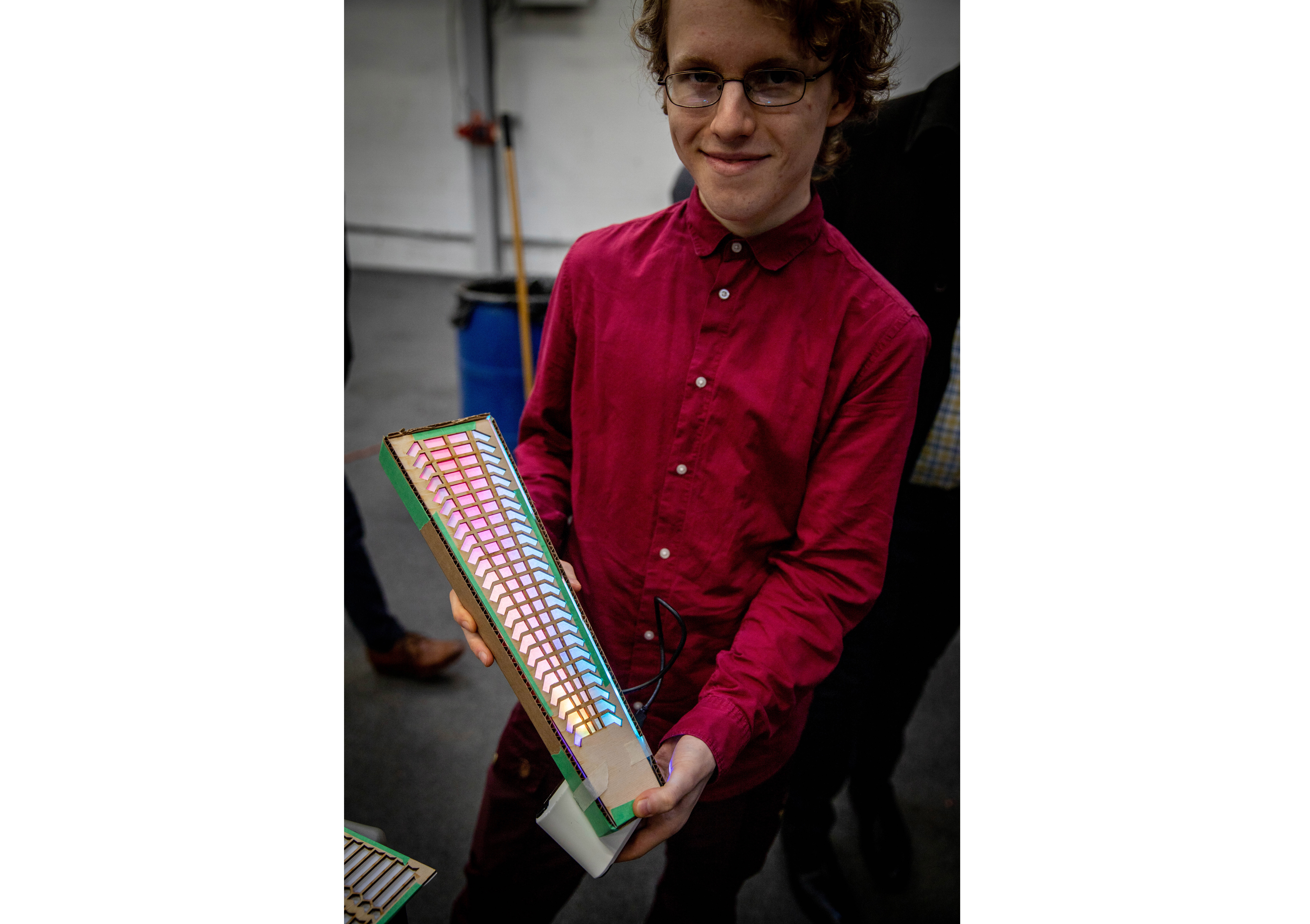 Student Researcher Azlen Elza shows off an early iterative prototype of one of the readouts ECU community members designed for the Prosthesis mech's "heads-up display."

The goal, he continues, is for a pilot to be able to absorb information instinctively, the way people unconsciously receive signals from their bodies.

To this end, Ben and Maria, alongside Research Technician Sean Arden, Industry Liaison Alan Goldman and Student Researchers Colby May and Azlen Elza, have done no small amount of dreaming. Some of their sleek, alien-looking prototype designs include flourishes like a “heavy metal horn sign,” which would light up when the machine is fully charged and ready to go.

“Having the opportunity to work on Prosthesis has proven to be one of the most exciting and challenging experiences in my academic career,” says Colby, an Interaction Design major, adding the team’s research began in science fiction, quickly progressing toward developing their own unique vision of future tech.

“Being able co-create with our team as well as the creator, technician, fabricator, and lead pilot has allowed us to successfully test every prototype decision. Access to the WIP Lab, BGML, and all the equipment in the school has opened up so many doors for us. This project has been eye-opening to the realization that we are living in the future; even the mech itself shows how far along we really are, and designing for these unknown solutions makes for an incredible experience.” 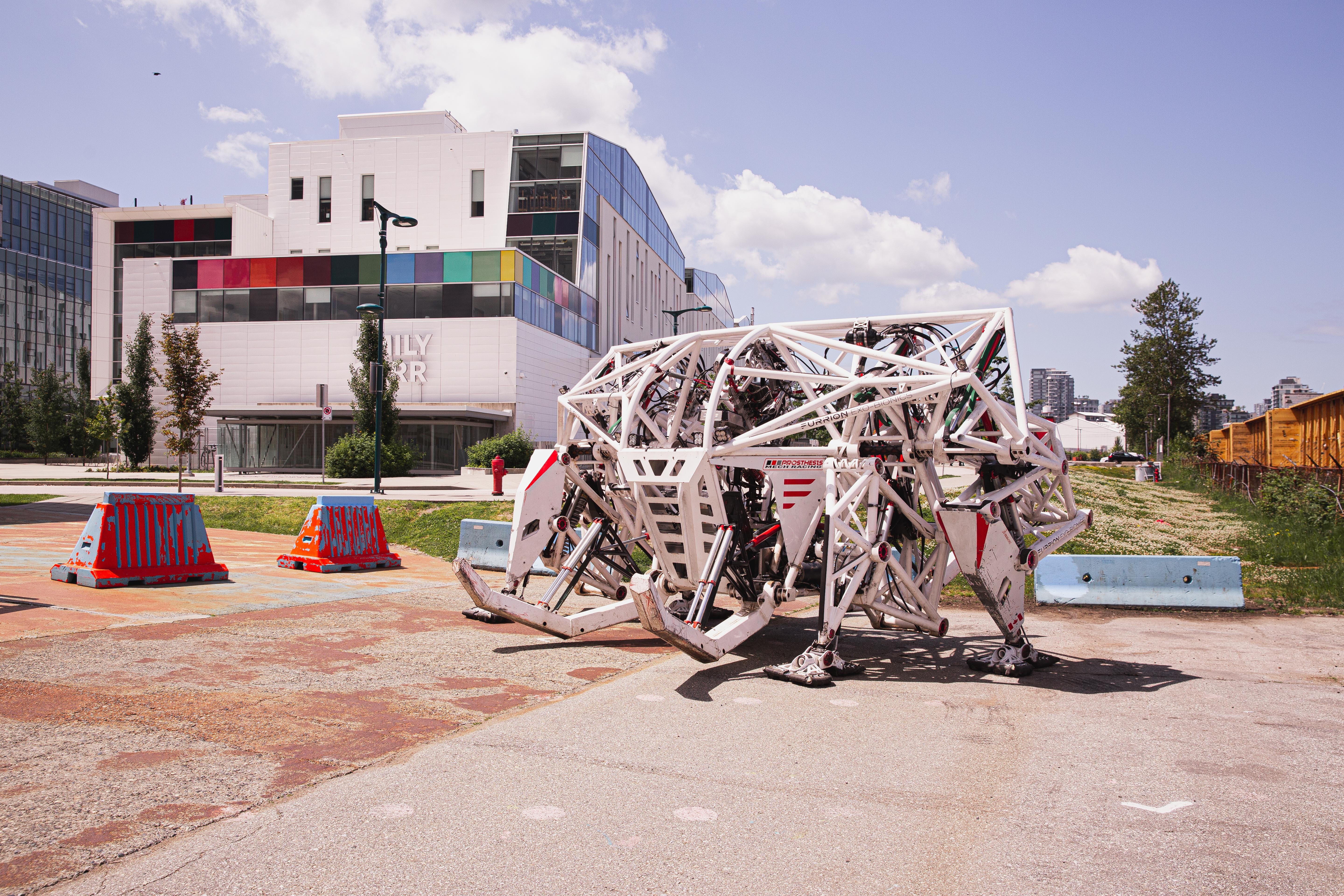 The Prosthesis mech sits in the sun ahead of a demonstration outside Emily Carr University.

Photo by Colby May.

Jonathan first began dreaming of a mech nearly 15 years ago. His experience as a designer of medical equipment including vascular brain implants gave him an inkling of the productive power of human-machine interfaces. Little did he know the drawings he’d begun to doodle in his spare time would become his full-time obsession, and make him one of the very first mech pilots in the world.

For Jonathan, the machine is a “celebration of human skill” at a time when automation is increasingly replacing human labour and even, in some cases, decision-making. First steps involved figuring out whether a human could even control an anthropomorphic machine; the many tests Jonathan and his team ran to this end were increasingly successful. The next hurdle was getting the thing built — an iterative process Jonathan says Kate Amstrong, Director of Living Labs and the Shumka Centre for Creative Entrepreneurship at Emily Carr, was instrumental in helping to refine.

“Back in the day, in 2009, Kate was helping me, guiding me,” he says. “Through trying to understand and articulate with her what the project was about and why I was excited about it, it became apparent that what I was creating was a sports machine.”

That insight, Jonathan adds, was key in the project’s trajectory to its current state. A fortuitous introduction to Aaron Fiddler, founder and CEO of Furrion, a technology and lifestyle company, led to an ongoing partnership. From there, Furrion Exo-Bionics — and a dream of a future Mech Racing League — were born. 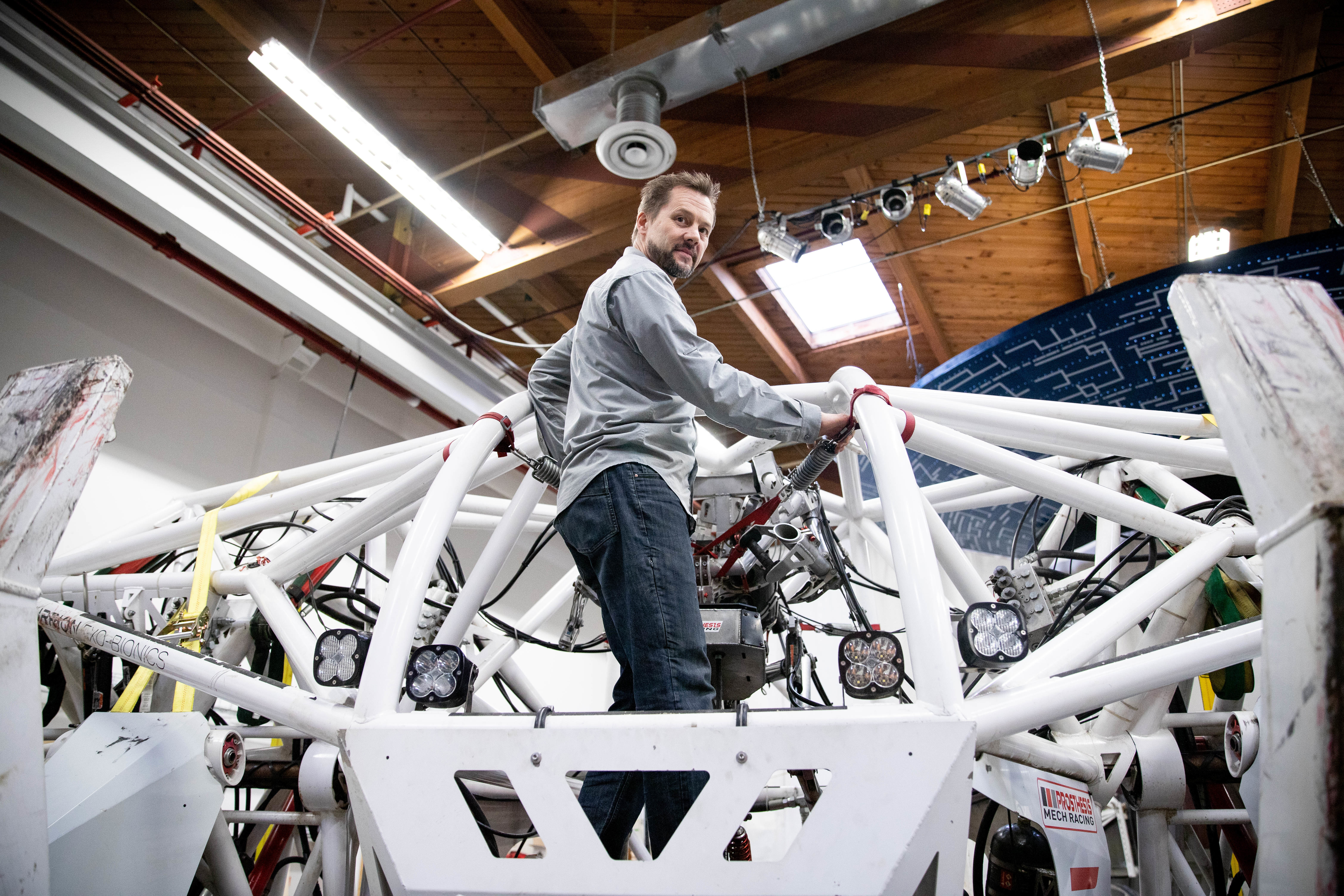 Jonathan Tippett scales the Prosthesis mech to slip into the pilot seat.

Hundreds — and perhaps thousands — of training hours later, Jonathan can get the thing spider-walking at a brisk pace. He also says he’s managed to sustain the coveted “gorilla gait” (a kind of mechanical gallop) several times in recent months. But more than anything, Jonathan says he’s excited to begin to grow the sport of mech racing, and to share the exhilaration of piloting a dream machine with the public.

“It’s unbelievable,” he says of donning the mech suit. “For a while, it's terrifying and disorienting and exhilarating and frustrating. Initially you take just one step, and then you reset, and then you take another step and then you reset. But the first time you do three steps in a row, it feels like when the Wright brothers’ plane took off for them.” 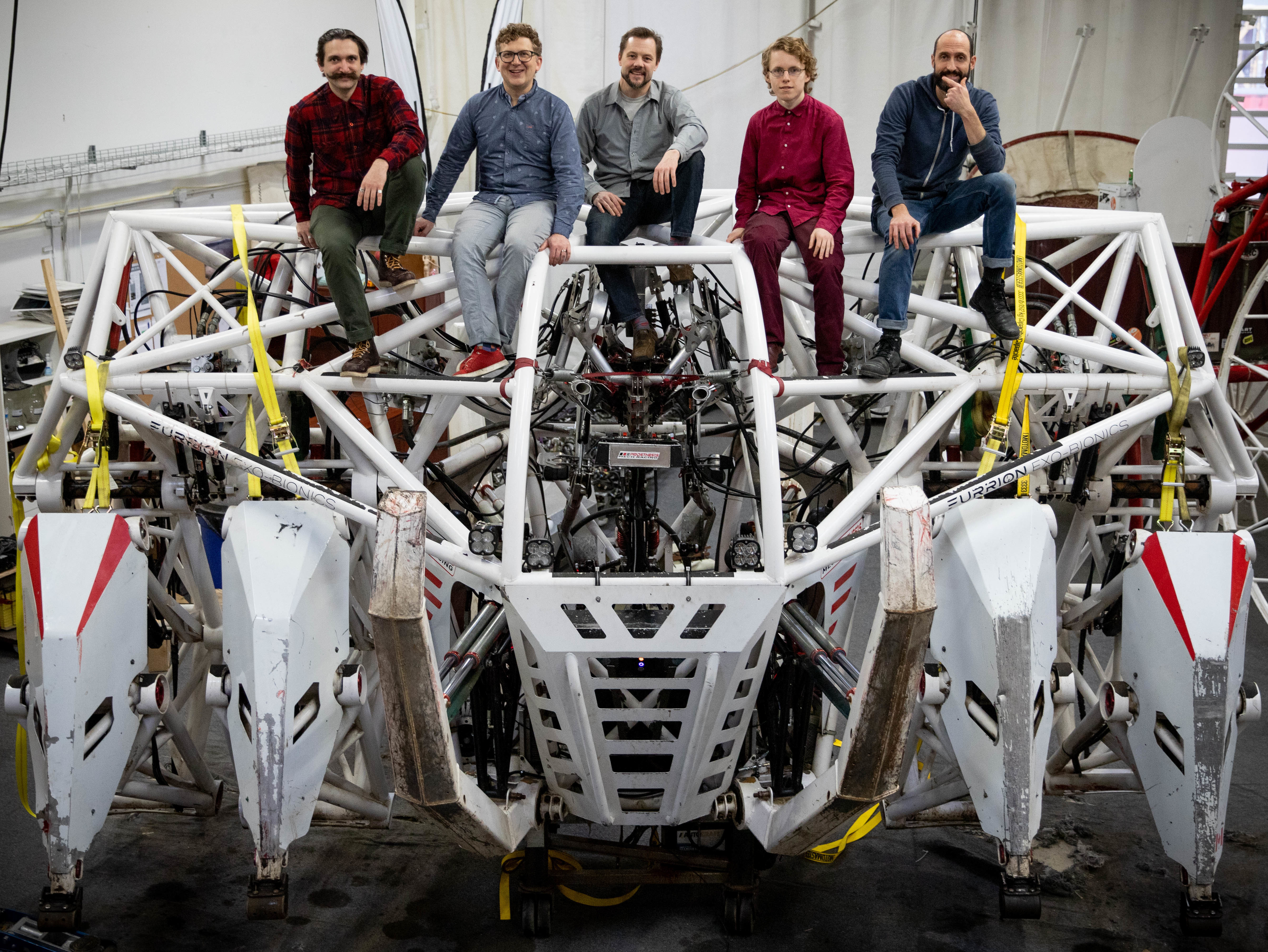