A pair of stunning works by artist and ECU MFA student Carollyne Yardley are a part of a new group exhibition at Vancouver’s Fazakas Gallery, which was recently featured in a Globe and Mail arts roundup.

According to her exhibition statement, Carollyne’s works are grounded in a lockdown-era reflection on the shifting boundaries between animal and human worlds — a subject thrown firmly into the spotlight as city streets, emptied by the pandemic, began to see an increasing amount of non-human traffic.

“I found myself thinking about how we share space with urban animals, and the fears urbanites have about animal-to-human disease transmission,” Carollyne writes.

“Bacteria and viruses frequently transfer genes between organisms and species boundaries, and humans, plants, and animals are made up of cells that learned to cooperate long ago in order to increase their survival. In my practice, I ask: Is our species fixed and immutable or is dynamic, and ever-changing? Is the distortion and transgression of boundaries grotesque, funny, or frightening?”

“History is being written before us, and art has always been one of the most effective tools for studying history.”

Each of the works in Living Room, according to the gallery, reflect on “experimental materiality and social awareness to the issues of domestic violence following stay-at-home orders, the effect on global supply chains, urbanization of natural habitats as disease-harbouring, and the woes of introspection following the bleakness of self-isolation.

“History is being written before us, and art has always been one of the most effective tools for studying history.”

Carollyne writes that Zoonetics was informed by a series of sculpture works, created earlier this year, entitled Pandemic Sculpture Garden.

“I created [the sculptures] during months of isolation, knitting together human hair and remnants found in my urban garden,” she writes of the inspiration for her eerily surreal oil-on-board composition. 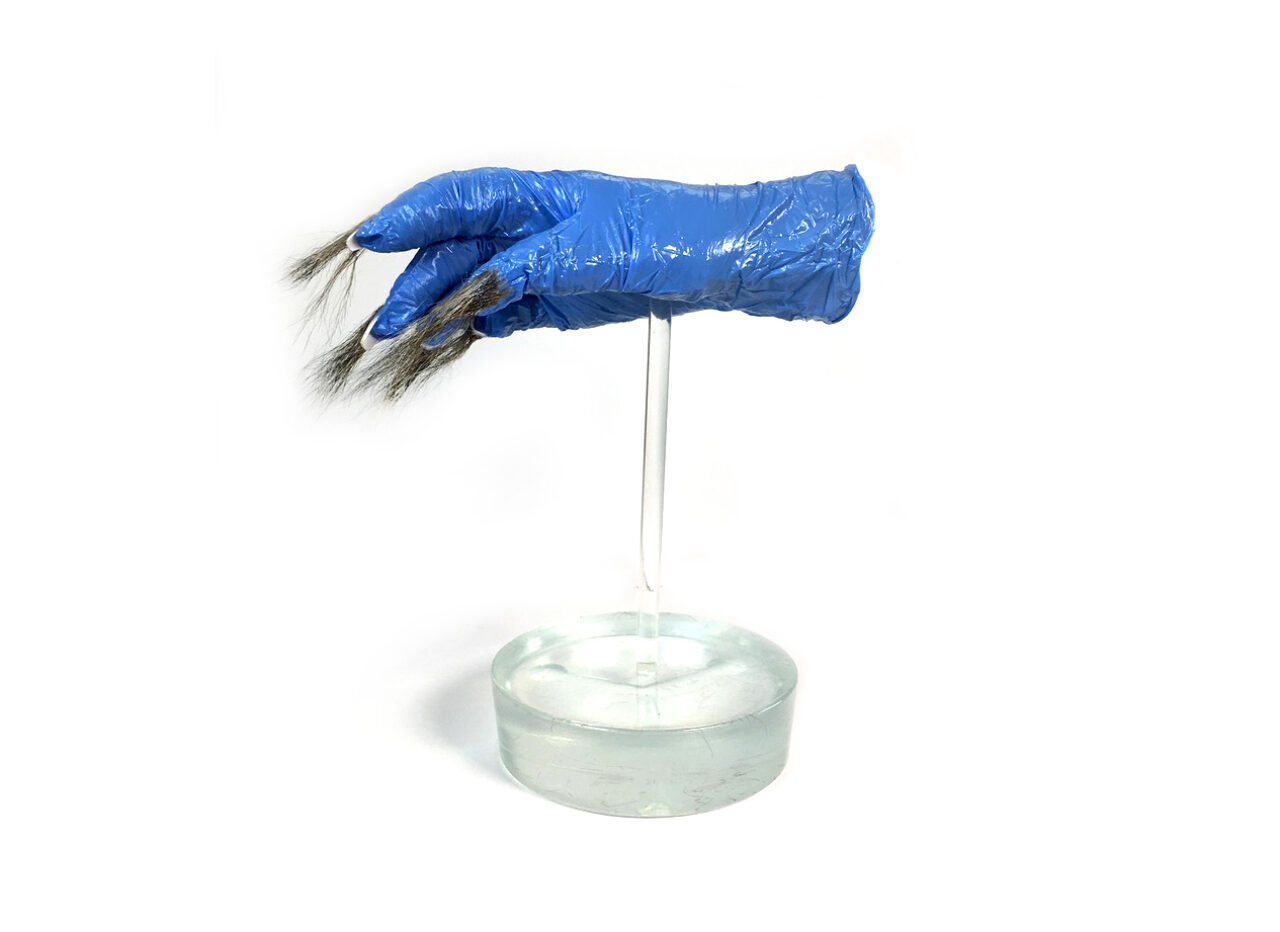 “This work is an iteration of an animal-human sympoiesis [or, mutual self-creation] related to infectious disease, interspecies relations, cohabitation, and co-evolutionary transformation – including the appearance of new bodies, organs, and species.”

Materials for her sculptural work, meanwhile, include human hair, a blue nitrile glove, acrylic nails and squirrel hair, which Carollyne identifies as likewise referring to interspecies concerns, as well as heightened fears around viral and bacterial infection.

“The sculpture Contagion combines thoughts about hand washing, viruses that live on protective gear, fear of touching surfaces, and infectious disease transmission from nonhuman animal-to-human, and DNA transmutation,” she writes. “Blue nitrile gloves are also a source of global litter due to the pandemic.”

You can view all of the works in Living Room now on the Fazakas Gallery’s website, where you can also take a virtual tour of the show.