On October 10, 2019, more than 100 people filtered into a large room full of tables, chairs and colourful craft supplies. Some worked in long-term care homes, some were family members of those living there, still others were student design researchers from Emily Carr University’s Health Design Lab (HDL). But as soon as they took their seats, they all became collaborators in Come Alive, a multi-year design project aimed at reimagining the culture of long-term care.

“This is our third year of working with Vancouver Coastal Health (VCH) and their long-term care team on this project,” says Caylee Raber, director of the Lab and project lead for Come Alive. “Our focus is on using participatory design methods to catalyze, support and amplify initiatives that address different complex health challenges.”

The participatory methods the lab uses take many forms, from collaborative storytelling activities to metaphorical imagery and interactive games. Each engages participants in the act of making, and each provides a new way for individuals to express their wishes, needs and visions for the future.

“We use participatory and co-design methods to amplify the insights, ideas and stories from people directly impacted by an issue,” Caylee says. “We're not just working with the organization, we're working directly with the people who are affected by or engaged in the work itself.” 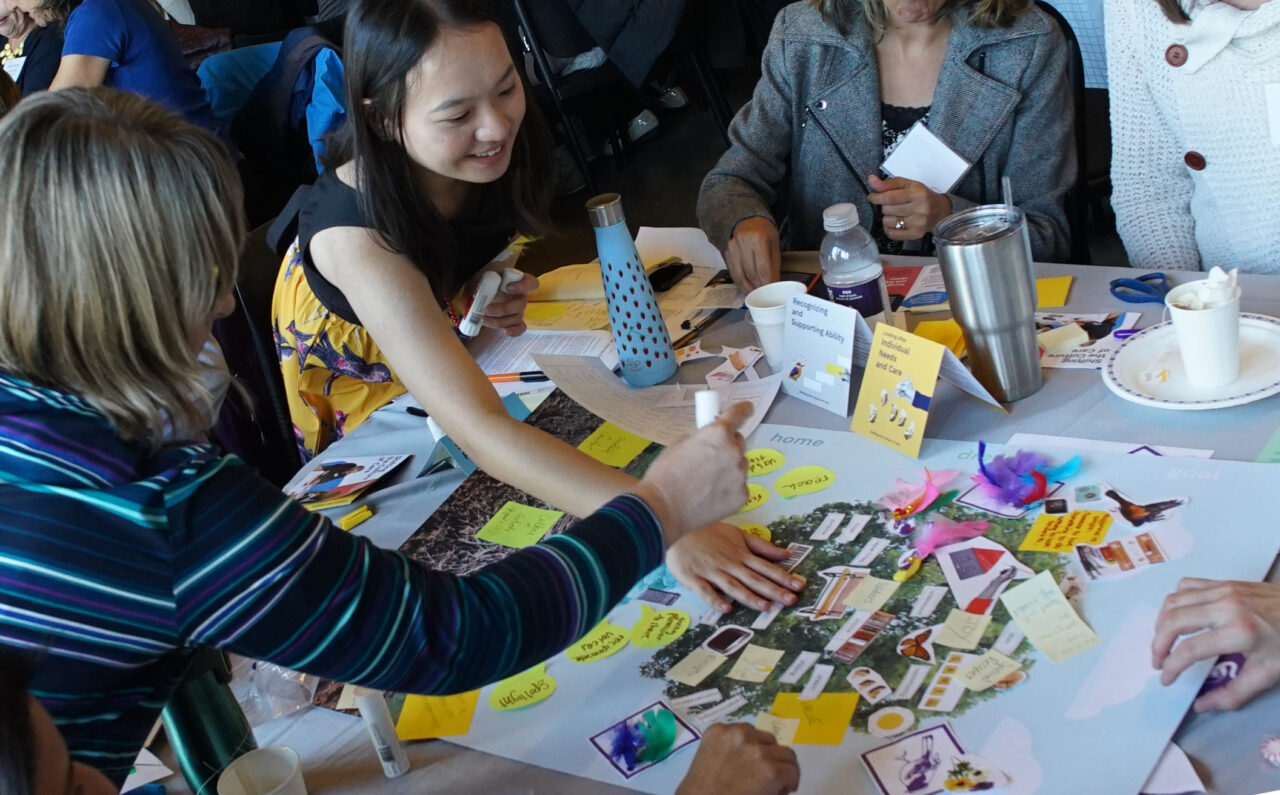 The October event was a success: it built on the lab’s previous work, which directly engaged people living in long-term care, and created a space for important conversations among care home staff. But with the onset of the COVID-19 pandemic just a few months later, reconnecting with those living or working in VCH’s care homes became almost impossible. What was meant to be the first in an on-going series of hands-on, in-person workshops ended up becoming the last.

“We had to come up with creative ways to continue the work that we knew was still important, pandemic or not,” says Ajra Doobenen, a fourth-year Industrial Design student and a research assistant on the project. “It was definitely a lot of learning.”

With guidance from Caylee and Lisa Boulton, interim manager and project co-lead, Ajra worked with fellow research assistants Morgan Martino and Vannysha Chang to find a new approach to Come Alive—one that would help alleviate the extra pressures facing the long-term care system rather than add to the burden.

As with any participatory design research project, finding that approach meant first understanding what the community wanted: “Design is such a powerful tool in the way that it changes how we interact with the world and with each other,” explains Morgan. “We had to make sure that we weren’t focusing on preconceived notions or goals for what should be accomplished instead of taking cues from the people who we were designing with.”

Through conversations with the long-term care leaders at VCH, it became clear that direct interactions with people in the homes would not be possible. To make a real difference, the team would have to pivot: “We shifted our focus from people living in care to the family members of those people,” Morgan explains. “Their spouses, children—people who are connected to this system, but also outside of it.”

The pandemic restrictions that were put in place to protect people living in care homes significantly impacted their quality of life, as well as their family members’ ability to provide essential care and support. “We realized that nothing could replace the interactions families were used to having in homes,” Caylee says. “But we saw an opportunity to support families—to create a space where they could connect and share with each other and collaborate on new ways to make those virtual visits and connections more meaningful.”

Starting in September 2020, the Health Design Lab began hosting Zoom workshops with family members of people living in more than 50 VCH care homes. While it wasn’t possible to apply the same methodologies they’d used in person, the workshops remained centred on engagement, giving participants the agency to develop their own solutions. Through collaborative tools, like virtual whiteboards, the team encouraged family members to share their own stories and help each other develop new approaches to staying connected during COVID-19. 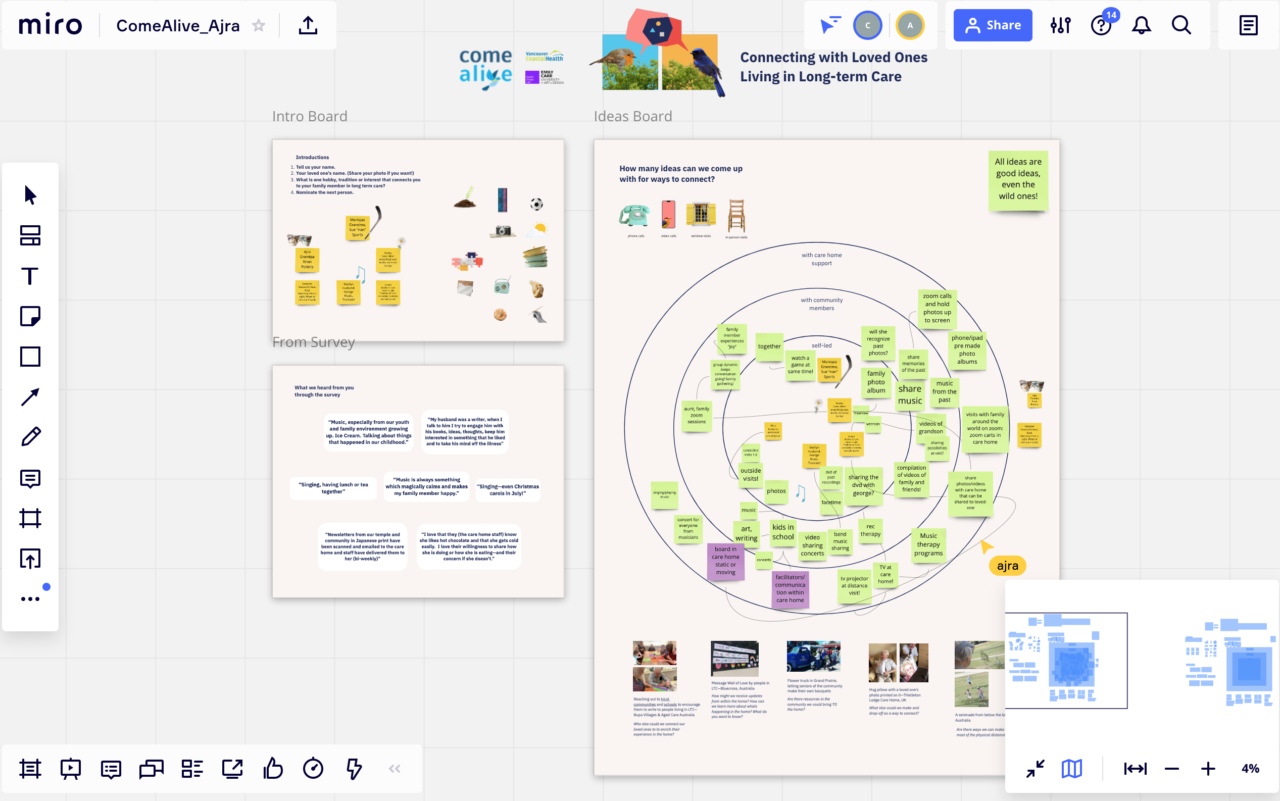 A screenshot of a Miro virtual whiteboard, used for the digital workshops.

Throughout, Ajra, Morgan and Vannysha acted as facilitators, providing guidance and suggestions to help participants tap into their own potential. “The family members and the people living in long-term care already had the knowledge, and they probably have the resources, but they might have not realized it yet,” Vannysha explains. “Our role was just to provide a different perspective—to just give a little nudge here and there.”

At times, those nudges took the form of simple questions, but, at others, the research team played a more active role. At one workshop, for example, a participant expressed frustration about the challenges of coordinating Zoom calls, so Vannysha suggested sending pre-recorded videos instead. “This simple idea, this shift in how the family was communicating, was so exciting to the family member,” Caylee recalls. “It really felt that we did our job in that moment.”

The list of ideas participants generated is now available at the Health Design Lab’s website—a living document that the team hopes will continue to evolve as they run more workshops in February 2021 with the Alzheimer Society of BC. Families are also invited to share their ideas with the team here. Some of the ideas within it are ambitious, like inviting students in the community to create letters or art projects to share with people living in long-term care. Others, however, are deceptively simple: dropping off a coffee, sending a voice recording or just calling to read a loved one a few pages from a favourite book over the phone. 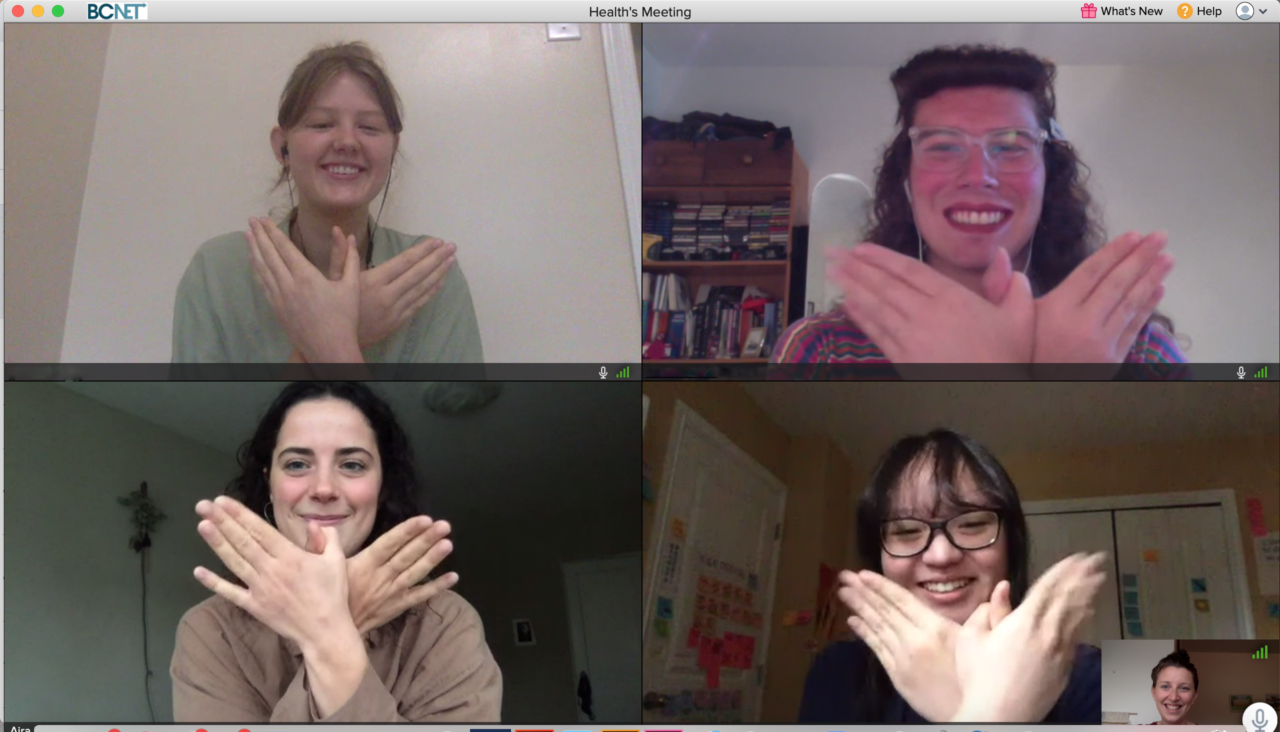 It's all of these tiny, small acts of care that can help people understand that they have the ability to impact their community and their family.

Ajra agrees: “It doesn't have to be a complicated act or idea in order to create space for a very meaningful connection or moment with your loved one.”

While the second wave of COVID-19 cases in October pushed many Vancouver residents back into self-isolation, the Come Alive team is more committed than ever. While the project’s focus remains families of people living in long-term care, the team encourages others to read through the list of ideas and consider what they can do to support loved ones during this difficult time.

“Even if this list is centered around a particular context and a particular time and place, a lot of the ideas are really timeless,” Morgan says. “Be thoughtful of one another and plan ahead how you want to show appreciation and love and support for the people in your life.”

“Make the most of these alternative environments,” Ajra adds. “Remember that there's still opportunity in these spaces for connecting to those that we care about.”

The Dementia Lab 2021 conference will highlight issues and innovations surrounding ability and disability, reflecting on how design and research efforts can lead the way in uncovering, supporting and enhancing the abilities of people with dementia and the community within which they live by involving them in the conversation. This is an inclusive multidisciplinary conversation, open to students, designers, artists, researchers, health professionals, carers, and people living with dementia.

Registration is open— click to learn more and get tickets!