Sitting in the Aboriginal Gathering Place, the artists and ECU students (and three of the four curators behind this year’s Aboriginal student art show) say that once they’d landed on that title, they knew it was right. (Here’s fourth curator, Kelsey Sparrow, was unavailable for interview.)

“The name was born from everything that was going on, everything that’s still going on now,” says Diane (who is of Ojibway and European ancestry, and a member of the Kawartha Nishnawbe First Nation).

She points to some of the current issues involving Indigenous rights within Canada, including the local, national and international showing of solidarity with members of the Wet’suwet’en nation and other Indigenous peoples who stand in opposition to the "current environmentally invasive and destructive projects" being built on unceded territories; the ongoing tragedy of Missing and Murdered Indigenous Women and Girls; and the broader and arguably failed project of reconciliation in Canada.

“We wanted to be relevant and react to what’s happening. It was like, ‘We’re HERE,’” she exclaims, bringing her open palm down on the table in emphasis. 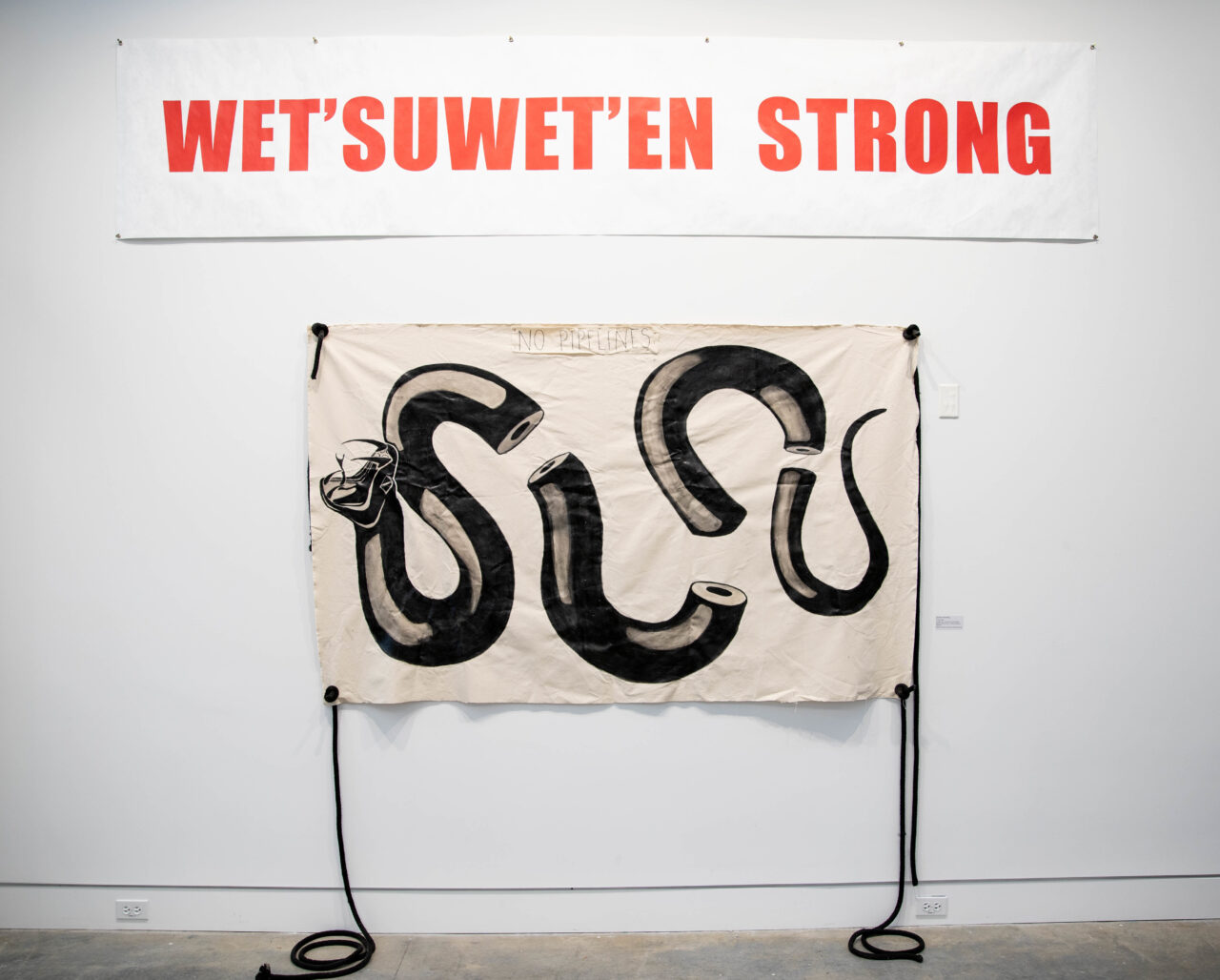 By Sydney Pickering
'There Will Be No Black Snake - Banner that has been used in actions against pipelines,' 2020. Acrylic on canvas with black rope.

Sydney (who is of Lil’wat and European ancestry and a member of Lil’wat Nation) notes that the decision to refer explicitly to political issues was one they all had to warm up to.

“I remember we wanted to stay away from that, initially,” she says. “But in the end you can’t ignore these things. At the opening we said, ‘We have to bring this up,’ and in our remarks we said, ‘We stand in solidarity with our Indigenous neighbours.’ Our lives are inherently political.”

Diane agrees, adding the show “ended up being quite political,” even though their curatorial call for submissions had been an open one.

“We didn’t call for that kind of work, but that’s what came up,” she says. “It’s on everybody’s minds. It’s an emotional thing. And it’s always an undercurrent of our lives.”

Megan (who is of Dakhká Tlingit and Tagish Khwáan ancestry, and a citizen of the Carcross/Tagish First Nation) reflected that, in retrospect, there was probably only a slim chance the show could have turned out any other way — especially with the issue of Wet’suwet’en sovereignty front and centre in communities across the country.

“I think we all felt like we couldn’t not do anything. This is something so prevalent in our lives, and we were considering the other artists and the emotional labour they may be undertaking,” she says.

“All of our hearts feel heavy being at the protests [in solidarity with Wet’suwet’en hereditary chiefs]. But then we’re all emotionally heavy when we’re not able to be there. The way I felt was that this show was a way for us to contribute to the cause. This is our way to give more voice to those that are silenced.” 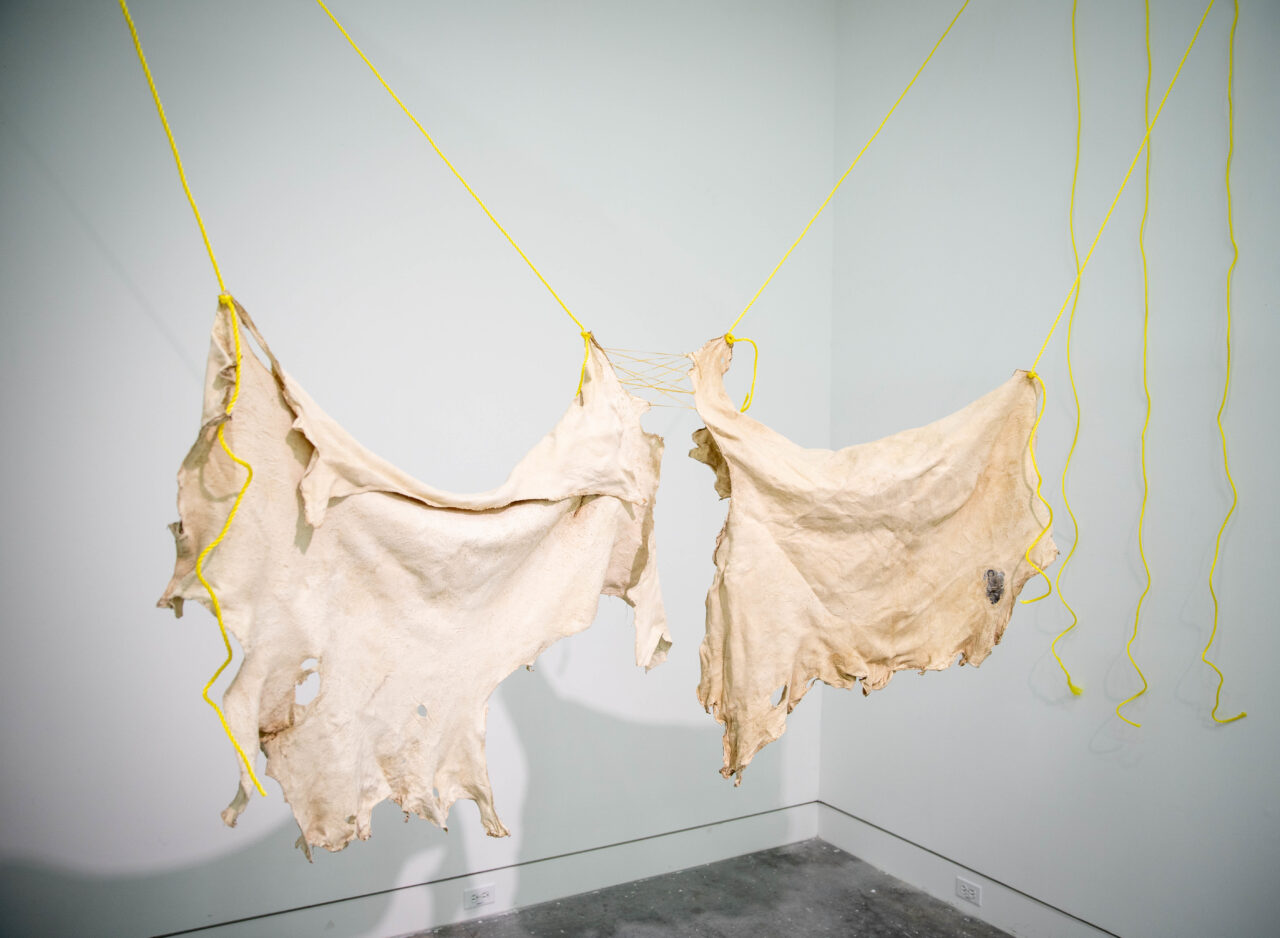 Diane, Megan and Sydney each have work in the show as well. Sydney’s work includes an austere anti-pipeline banner that was used during protests in solidarity with the Wet’suwet’en people, and an installation of brain-tanned deer hides she made with her community in Mount Currie as a representation of her reconnecting with her ancestral lands.

Diane’s work includes woodland landscape paintings incorporating birch-bark bitings which, she notes, take on political undertones when viewed through the lens of the exhibition’s broader context. Megan’s work includes the Northwest Coast formline painting at the entrance to the Exhibition Commons, on a wall painted a dark, slate blue that echoes the colours of the painting itself. The figure in Megan's painting appears to struggle within the confines of the canvas, enacting a push-and-pull tension with the edges of the painting itself.

“As Indigenous artists, we all to some degree experience these tensions during our time in university, and that expands beyond these walls as well," Megan says.

Sydney reports having struggled with some fundamental questions in undertaking an exhibition at a time when attending demonstrations and solidarity actions feels like an urgent obligation.

“I feel conflicted, sometimes, taking the time to be in these actions and then coming back here, to the school,” Sydney says. “It’s such a different environment. It feels like, is visual art going to have an actual impact? Or inform people?” 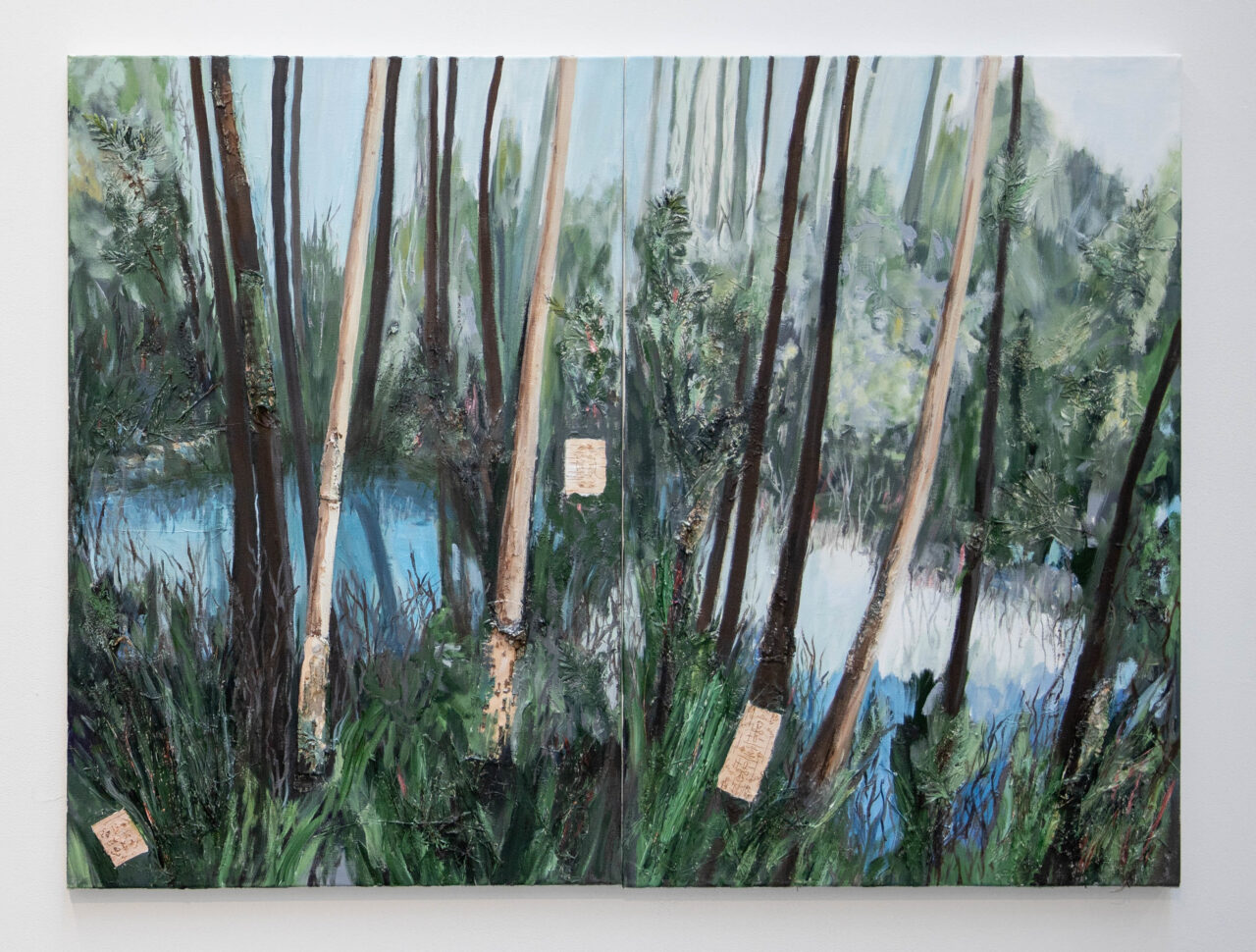 By Diane Blunt.
'What the Woodlands Give #2,' 2020. Acrylic, birch bark biting, cedar, sweetgrass, birch and tobacco.

Megan and Diane say Sydney’s questions reflect a deeper struggle to square the idea of being an Indigenous artist in a settler institution. This status, they note, can lead to situations where they’re asked to do the work of “being Indigenous” — a semi-coercive expectation that the Indigenous person in the room will act as teacher for groups of people who may not understand Indigenous history or contemporary politics. Here, they note, is in many ways a response to some of these challenges.

Ultimately, reflecting the diversity of Indigenous experience at ECU was the goal the curators had most hoped to accomplish — and proudly fell they’ve achieved.

“Which all circulates back to Here,” Megan adds. “Not all of us are on the same path but we’re all here. And all of our paths intersect because we’re here. But we’re our own distinct people, and we’re all individuals. And we wanted to honour that.” 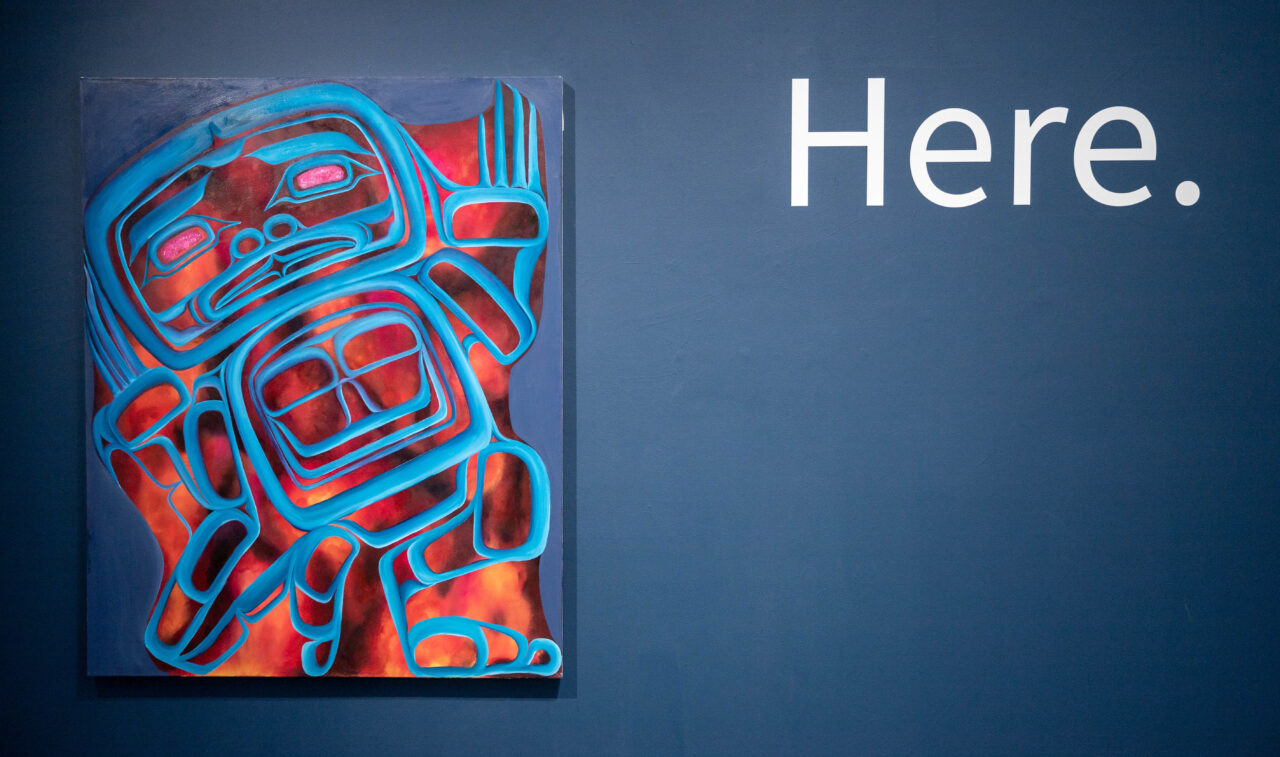 Currently in her third year at Emily Carr University, Diane Blunt is an artist of mixed descent – Ojibway on her father’s side and German on her mothers. She is a member of the Kawartha Nishnawbe Nation. Diane is pursuing her BFA in Visual Arts where the nature of her work has been exploring drawing, painting, and material practices. She has been the recipient of multiple funding awards including the CIBC Foundation Award, the Brissenden Scholarship, the Ian Gillespie Aboriginal Scholarship, and the Jack and Doris Shadbolt Scholarship.

I am inspired by the examination and revalidation of the histories of my cultures. Today, cultures are constantly being blended which I find an interesting place to look for synergies. What is lost and what is found through assimilation? By exploring stories, environments, creatures, plants and medicines, my work reconnects me to elements of my memories that hold important connections to my spirituality and heritage.

Megan Jensen (Guná) is a young Indigenous artist, dancer and student of Northwest Coast design. Guná, is of Dakhká Tlingit and Tagish Khwáan Ancestry from the Dahk’laweidi Clan (killer whale) which falls under the wolf/eagle moiety. Her family has made the beautiful area of the southern lakes in the Yukon Territory their home for numerous generations. Megan has practiced and studied the intricate and incredibly complex work of northwest coast design for 10 years, and continues to build on her knowledge of Tlingit Formline. The majority of her practice has been dedicated to the revitalization of traditional northwest coast design, however she is always critically reflecting on where it will go in the future. Megan plays with the relationship of the ancient and the contemporary, and strives to enable her audience to highly consider where a young indigenous artist positions themselves in such a complex cultural landscape in an industrialized world.

Megan is currently attending Emily Carr University of Art Design pursuing her BVA (Bachelors of Visual Arts.) Through her journey in academia, Megan has come to realize the dying need for a larger diverse demographic in Canadian Institutions. As a young Indigenous female, Guná aspires to become an instructor in art history, but will never stop evolving her artistic career. She aspires to engage the younger generations in aiding to identify what it means to be Indigenous in the contemporary moment, and in turn how this influences our artistic/cultural practices. Guná’s mandate as a facilitator is to foster a more diverse, dynamic and innovative environment for learning. All the while allowing her designs and paintings to ever evolve and mirror the realities of a young Indigenous female artist in the contemporary moment trying to find her way.

“Since time immemorial our people have been malleable to the winds of change, had
they not done this, we simply would no longer exist. This is about telling their story,
however this is also about telling our stories through art, song and dance for all the future generations to come.”
– Guná

A member of Lil’wat Nation and of European descent, Sydney Frances Pickering is a multi-disciplinary artist currently living on the unceded territories of the Musqueam, Squamish and Tsleil-Waututh nations. Pickering is an undergraduate student primarily working with sculpture, video, and installation in her fourth and final year of a BFA. Her work over the past few years is grounded by her continued connection to ancestral land and practices.

My work tells stories of my family’s history as indigenous peoples and brings awareness to current issues, that carry out this country’s legacy of colonialism, and how that legacy has directly affected my family’s journey into reconnecting with our community and ancestral territories in Mount Currie. As indigenous peoples we are inherently connected to the land, with current political actions being taken to protect the land, tensions are growing as the Euro-western capitalist system is being threatened. We do not live in a post-colonial world, large corporate and invasive projects are being pushed through that continuously harm Mother Earth and our people. Our Mother Earth is in a state of emergency.