In an effort to combat the impact Covid-19 is having on local Vancouver-based restaurants and businesses, artist, designer and ECU alum Jodie Lavery started collecting donations in exchange for small paintings on paper. Her initial goal was modest, but she quickly surpassed her own expectations.

“I posted an Instagram story to see if anyone would be interested in sending me a donation in exchange for a painting,” shared Jodie. “I thought I would maybe raise a few hundred dollars while getting to do some paintings, which used to be a hobby of mine.”

However, the project quickly grew far past the initial goal Jodie hoped for. Since the original offer, Jodie has exchanged over 60 paintings for donations with the total amount exceeding $2000. “I have been so overwhelmed with the response I have gotten from friends, friends of friends, and even people I have never met,” said Jodie, who is covering the cost of supplies herself. “100% of this money is being donated,” she emphasized.

Jodie currently works for the Daily Hive as their graphic designer here in Vancouver, but used to work in the restaurant industry during her time at Emily Carr. “On a personal note, I used to work as a server and it carried me through my degree,” said Jodie. “I have many close friends who work in the industry and to see how many people are struggling right now has been weighing heavily on me. I wanted to help support local restaurants and businesses during this time, but initially didn’t know how.”

“Painting has been a great way to unplug and do something I love to do while also helping others,” said Jodie. It’s not only the organizations she has been donating to, but the people who have donated have expressed how much it’s helping them too. “The response has been incredible. It is bringing joy to those who have donated during a tough time. People feel good when they get to contribute,” said Jodie. “This project has given people an outlet to do that, and to feel good about it. And on top of that, art sparks joy. I wanted to bring a bit of warmth and colour into people’s homes.”

Each painting Jodie has created contains the same warm neutral palette that is calming and contemporary, inspired by the sunsets we’ve been having in BC. “I live on the beach at English Bay and my apartment faces the ocean, so I have been watching the sunsets every evening,” said Jodie. “I wanted a palette that included these tones, as well as some more earthy versions of these colours to make it easy for people to envision the painting in their home.”

Although Jodie repeats motifs and layouts, each painting is created intuitively. “I really wanted to use this time to unplug and get away from the screen,” said Jodie. “I am just drawing them out on the paper before I paint. I like that each one turns out a little bit different, even if I am using the same design over and over. It’s really organic.” Working with her hands is both therapeutic and second nature as Jodie started out her career as an artist, and since transitioning to design, she sticks to pen and paper before jumping in digitally. “But it has been so long since I have painted, so it feels great,” shared Jodie. 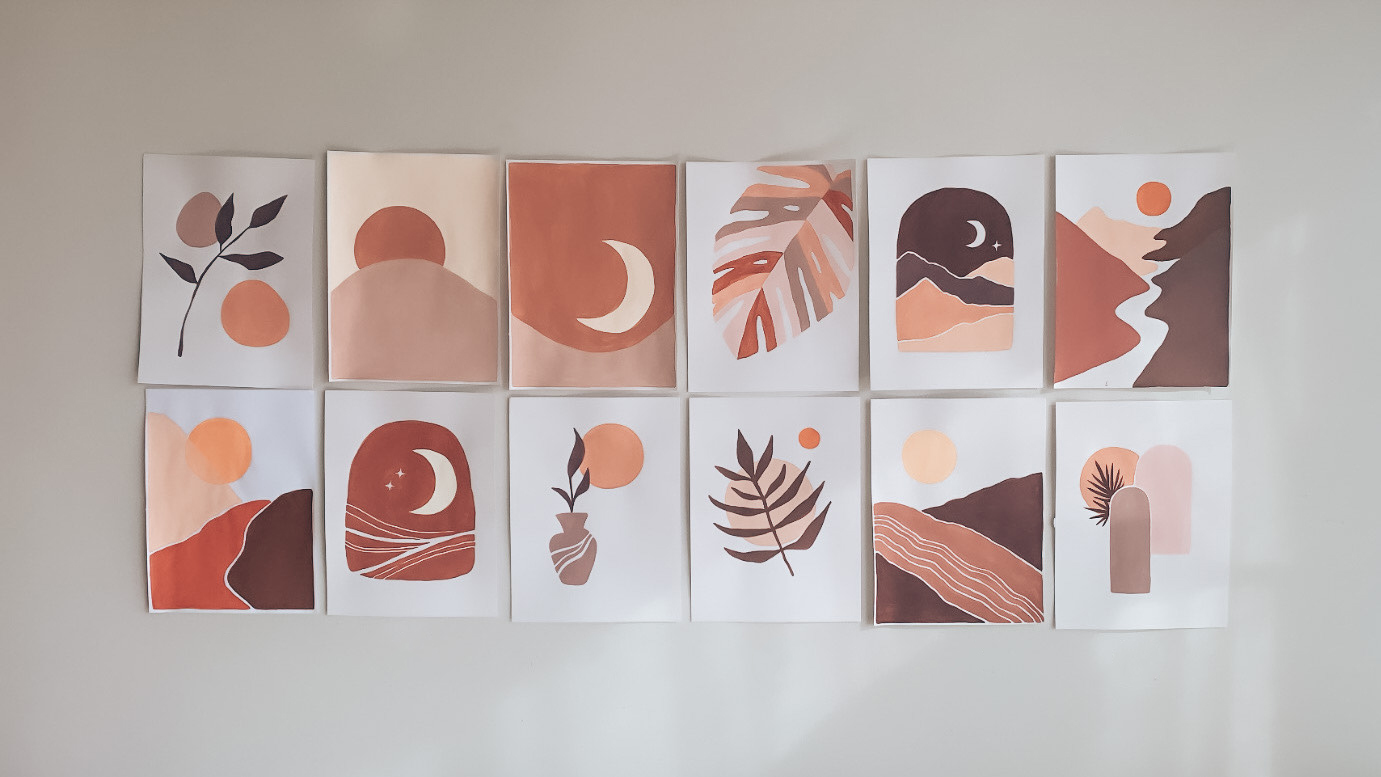 While some of the donations are pledges that are still being collected, Jodie has already made the first major donation. She chose Food Coalition, a Vancouver project started by Chambar restaurant to assist other local restaurants. Food Coalition has been created to coordinate restaurants committed to using local producers and create meals for those in need now, and in the future. Jodie donated $1000 of the money she has raised to Food Coalition to support the project. “I used to serve at Chambar restaurant, and have many friends who work there still. I had been seeing my friends post on social media about this amazing project Chambar started,” said Jodie. “Once I looked into it, I knew I had to give some of the donations there!”

“In a nutshell, Food Coalition gives money local restaurants so that they can stay open, and in return, these restaurants are cooking meals for people who are struggling to afford food during the pandemic,” shared Jodie. “Donating to this organization helps keep our local restaurants open while also providing meals to vulnerable members of the community. At the time I donated, there was a generous person who was matching all donations made. By donating $1000 it was actually like donating $2000. This amount of money provided 200 meals to people who need it.”

While she has been accepting donations electronically, she’s been delivering the paintings by hand (and no-contact style of course). “I have spent a few days driving around, leaving them outside people’s houses or in their apartment lobby for them,” said Jodie. “I’m wearing a mask and using sanitizer between every drop off! I’ve been keeping a spreadsheet to track exactly how much everyone has sent me. This has made it easier for me to donate to organizations online all at once.” She’s sharing the organizations she’s choosing through her Instagram.

“I hope this inspires other creatives to think of ways they can spread a bit of joy using their talents,” said Jodie. “Even if it’s not to get donations. Art and design can be a beautiful way to do some good in the world right now. A great example of this are the murals we are seeing all over the city. Every little bit of joy counts, whether it’s raising money for something or just helping someone else smile. It’s okay to just relax and do nothing, but if you choose to do something, let’s choose to create!”

For those interested in following Jodie’s philanthropic efforts, visit her on Instagram and check out the highlight titled Paintings.