Artist Kitty Blandy (BFA 2009) was busy documenting thirty years of her work and practice with help from apprentice Mary Rusak, an artist and recent ECU grad (BFA 2020), when the pandemic hit. The pair had been connected via the Art Apprenticeship Network — a program developed by the Shumka Centre for Creative Entrepreneurship to fund student apprenticeships with established artists, curators and cultural workers.

But as the impacts of COVID-19 quickly reached into the minutiae of everyday life, the scope of their work shifted in response. Kitty decided to begin a new piece, Meditation Pathway, which has seen Kitty and Mary carving and curving a looping footpath into the ground outside Kitty’s house.

“The site of this project is the front yard of my home, an area that was once lawn but now is a patchwork of various plant species that have seeded themselves in poor soil,” Kitty writes. The footpath’s route was chosen, she adds, by “observing the areas of inherent plant growth, creating a gentle system of pathways across the area.”

“Allowing the natural flora to remain intact was an integral part of the project,” she continues. “The idea of gardening, working with the earth as a form of meditation, led me to reflect on the labyrinth or path as a tool of meditation. However, I am drawn to the making of the pathway as the method of meditation: clearing the path, sifting the soil to remove the stones, and redistributing the earth across the garden – all these actions contribute to a calming of the mind. Repetitive manual actions, focussing the eye and body on a single task, can induce a present state of mind, as opposed to a ruminating one.” 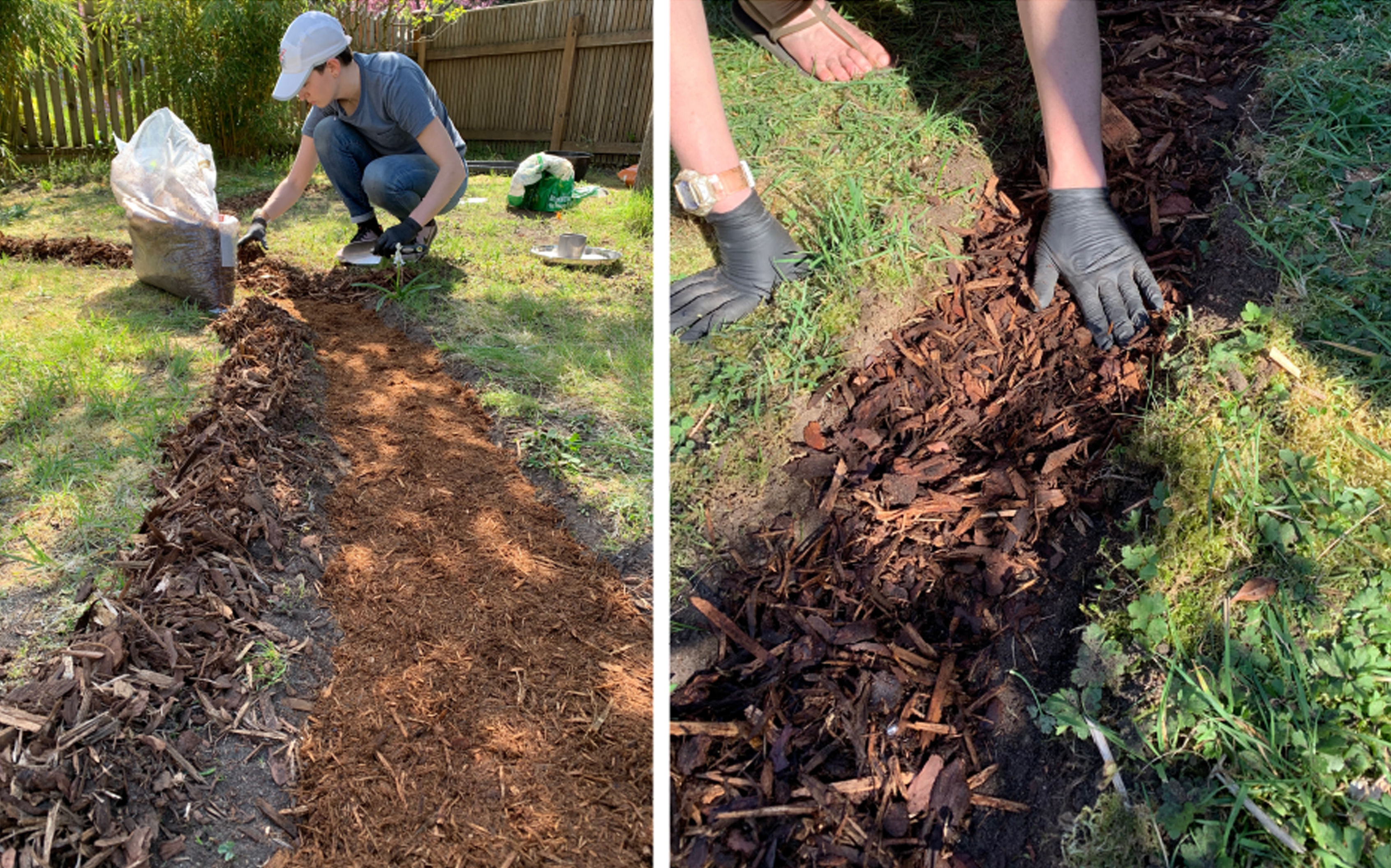 Kitty notes the “parting” of the path at various places into a choice between left or right likewise has echoes in numerous traditions of spiritual and ethical thought.

And, in a sense, her observations formalize an intuition many people have found themselves following since the world was turned on its head by the pandemic: simple, quiet, repetitive rituals and practices, undertaken deliberately and with sustained focus, provide a kind of psychic anchor for lives otherwise unmoored from the broader architecture of routine by which they’re typically structured.

Mary reports a very similar experience in working on Meditation Pathway with Kitty:

“Though we have had to make changes to how we work, often working from home and being sure to distance ourselves in-person, it has been helpful to keep a routine,” she says. “Being able to work together on a project that involves meditative practices gives our minds a break from the stress of the pandemic. It is a reminder that there are still valuable ways to spend this time we have been given.”

Meditation Pathway also provides a picture-perfect example of the ways in which artists so often respond to forces and cues to begin or develop their works, Mary adds.

“One thing that I have noticed from being involved in the art community and this project with Kitty, in particular, is that an artwork can begin with a really small idea,” she says.

“It could be an interest, a simple question, or you could be pushed to work in a different way and you could see something that sparks an idea that you would have never thought of otherwise. You don’t have to have a grand concept to make a meaningful project, and though this may be obvious, it is something I often forget. Kitty and I started with the basic desire to work outside, but it has grown into something more. It’s produced many worthwhile conversations and been an impactful experience.”

This story of adaptation and responsiveness is one that is being repeated by in many households and by many artists, since the pandemic began, she says.

Kitty likewise draws a connection between the formal dynamic of Mediation Pathway — as well as the interpersonal dynamic she and Mary have struck while working on it — and the ways in which recent months have affected communities across the globe.

“The paths we create together link the two of us while keeping us separate enough,” she writes. “This connected but divided method mirrors the manner in which we are all linked by the force of COVID-19; together in isolation, each on our own paths.”

Kitty Blandy was born and raised in Britain, into a medical family. Her exposure to the corporeality of others prompted an independent visual training in drawing, print and sculpture. Her work concentrates on the body as a site of physical sensation exploring physiognomical form and states of being. In 1987 she emigrated to Vancouver and continued to exhibit in both the UK and Canada, and her work is included in many collections, notably the National Portrait Gallery, London. Blandy holds a BFA from Emily Carr University of Art + Design, and has received the Elizabeth Greenshields Foundation Grant and the Contemporary Art Society of Vancouver Emerging Artist Award. Blandy has served on the boards of several non-profit arts organizations. Her work is represented by Franc Gallery, Vancouver.

Mary Rusak is a Canadian-born emerging artist who works mainly within a photography and printmaking practice. She attended Haliburton School of the Arts in 2014 to study drawing and painting and then continued on to Emily Carr University and will be graduating with a BFA in 2020, majoring in photography and minoring in social practice and community engagement. Throughout her time in Vancouver she has participated in various community art projects such as Landmarks 2017 and working with Border Free Bees on the project Bumble Baskets. Mary’s practice is environmentally focused and often explores the intersections between art and science. Her concepts revolve around the relationship between humans and non-humans, specifically plant life. She pursues sustainability and plant repurposing in her work. Projects have included using plant dye in alternative photography and finding ways to have a photographic practice leaves the smallest carbon footprint. By looking both into history and the quickly changing world of the present, Mary hopes to create work that speaks on an informative level of the environmental issues we face but also offer an aesthetic that embraces both the scientific and artistic.

About the Art Apprenticeship Network

Art Apprenticeship Network is a new program funded by the RBC Emerging Artists Project, and developed by the Shumka Centre for Creative Entrepreneurship to fund student apprenticeships with established artists, curators and cultural workers. Through this program, Emily Carr students assist artists with studio work and project production. Developed to build and strengthen the local art ecosystem through a part-time apprenticeship model, the program aims to create opportunities for paid work, social connection, and hands-on experience for emerging practitioners while supporting established artists and cultural workers by connecting them with assistants at no cost.