Hold My Hoops is a wearable art piece made in response to the US/Mexico Border Crisis. As the border crisis has developed, the Trump Administration and Immigration and Customs Enforcement, or ICE, has made it increasingly more dangerous for Hispanic families, as detention centres are implemented, and deportation and detainment are a real fear for children and adults alike. Through my consideration of Chola culture, a subculture of Mexican-American youth in Southern California, is an assertion of culture and history within a feminine context. Oversized hoop earrings, sometimes having words in them, are a staple in Latinx-American communities and can be a symbol of cultural pride and femininity. As said by Dr Rosa-Linda Fregoso, “[Cholas] took over the streets and taught [me] that it wasn't a male dominated space.” The idea of taking over a male dominated space through both cultural pride and femininity is one which I wanted to utilize, in using this staple accessory to make a statement towards ICE, one of the many embodiments of Trump's hostile immigration policies. Chola style originated from Pachuca/Pachuco culture, coming from the era of the Zoot Suit Riots and Mexican Repatriation, where the US government deported close to 2 million Mexican people, and over half of them having American citizenship. As we see history repeating itself with the aggressive policies of the Trump Administration, the assertion of culture and history is a key element to both Chola culture, and to protest. Each of the four hoops contains a different buzzword related to the border crisis inside including: Illegal, Alien, Undocumented, and Immigrant, words which have been used in media, by Immigration and Customs Enforcement officials, and the 45th president of the United States. The phrase hold my hoops is one which is often used within media and pop culture especially when girls and women of colour are faced with a fight or confrontation. The border crisis facing Latinx folks is a fight against the 45th president of the United States which I'm willing to face, so: Hold my Hoops. 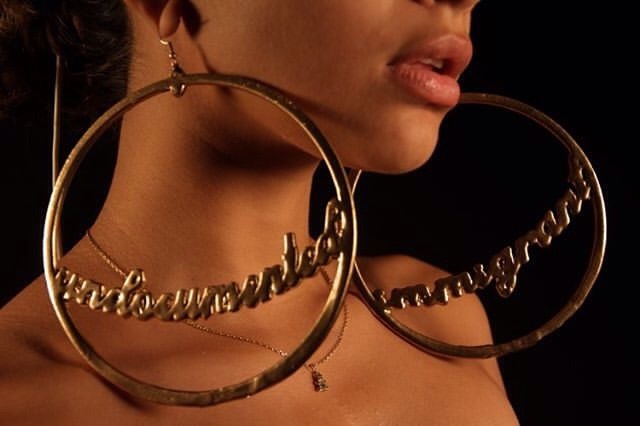 Hold My Hoops, on display in the Library until March 2nd.