A recent exhibition of new works by Vancouver-based Iranian-Canadian artist Mehran Modarres-Sadeghi (MFA 2017) at the Sunshine Coast Arts Council's Doris Crowston Gallery has been receiving attention from all corners of the province, with Mehran featured in a podcast, a CBC Radio interview and in print.

The austere and sometimes playful work spans drawing and sculpture, with abstract and botanical graphite compositions, children’s books rendered in black and white, and found objects webbed in elegant skeins of black thread. According to Mehran, the drawings and objects that make up the show, entitled Thread, address the linguistic and formal “in-between spaces” carved out by globalization.

“The whole work is travelling from one culture to another,” Mehran says, pointing to the titles of the works, which include both English and Persian-English (which renders Persian words phonetically using the Roman alphabet).

The series Ma Miaeem va Miravim (We Come and Go), consists of stark graphite reproductions of the children’s book, ‘We Come and Go.’ The names of the book’s characters, Dick, Jane, and Sally, have been changed to Iranian names: Babak, Mina, and Leila. The signs and symbols of Western childhood — milk vans, roller-skates, picket fences — have also been changed or obscured to reflect Mehran’s experience of childhood in Iran. 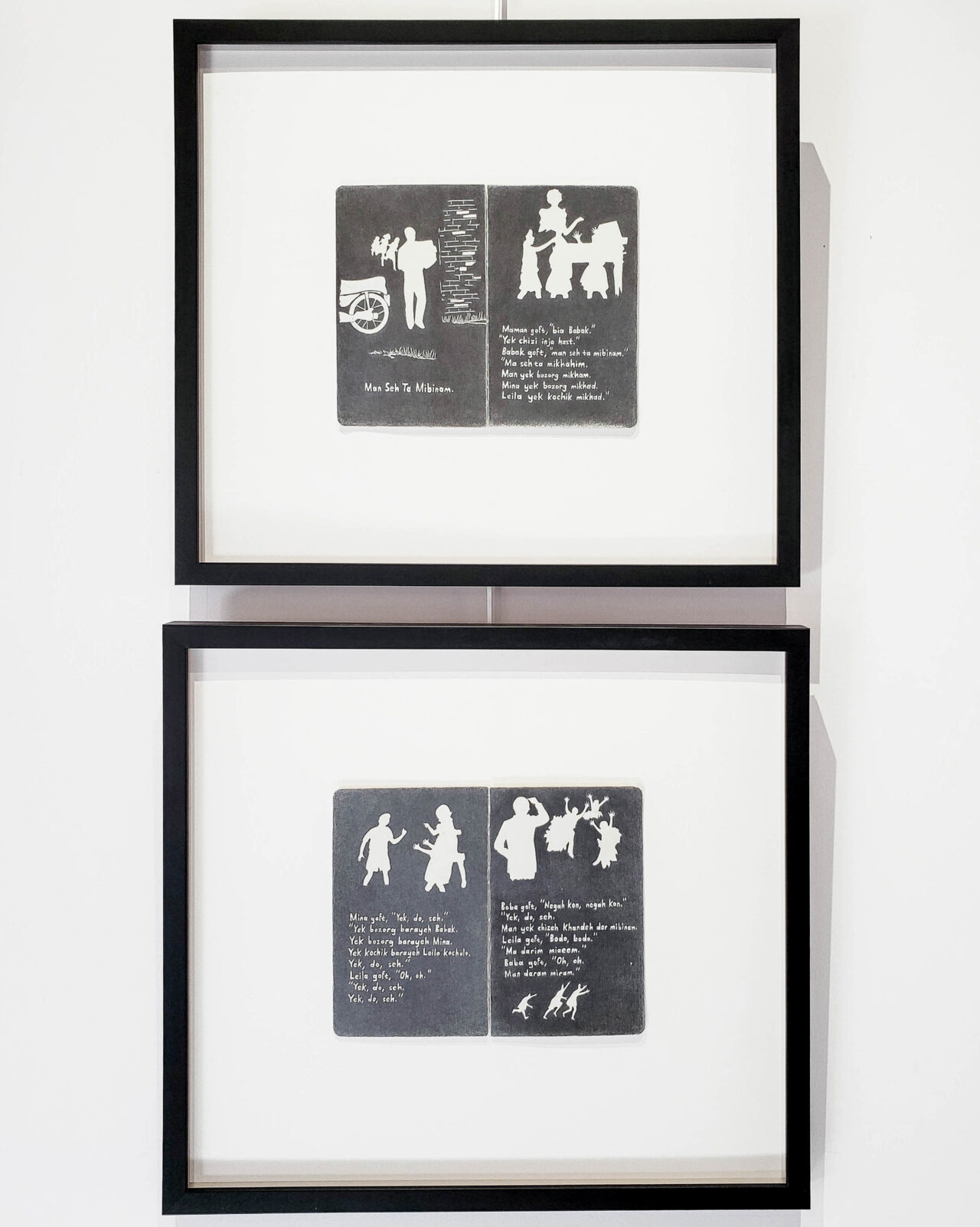 Conceptually, the works draws a line between the artist’s personal experience of travel and cultural transliteration and the experiences of her children, who are growing up in a Western country.

“Learning English was quite interesting for me, because I always compare it with how I try to teach Persian to my children,” she says. “When I wanted to teach my young children Persian, it was so challenging. The children of immigrants, Iranians in the diaspora, can speak Persian, but cannot read it or write it. But they can read Persian-English, because it uses the English alphabet. So that’s how I came up with the idea of translating the book into Persian-English.”

This anecdote, Mehran says, reflects her experience of globalization more broadly. Globalization is often thought of as a force which creates hybridity and interethnic exchange, she notes. But in fact, the exchange is often very much one-way.

“I travelled to Iran and there was a mall in Isfahan, called ‘City Centre.’ Two English words,” she says. “And the mall is exactly like the mall here. Like you go to Metrotown. And all around the world, I see similar things. So there is this thinking that globalization is about learning from each other, but it’s mostly about [the spread of] western culture. It’s not looking at minority culture as much. And there’s not much learning about minority languages.”

In the case of the sculptural objects in Thread, Mehran’s use of obsessive graphite mark-making is replaced by an equally obsessive use of black thread. The thread is wound into a sable latticework around everyday household items including “traditional Iranian objects, such as a copper tray and blue tiles, and modern objects from Western culture, such as Adidas shoes, and headphones.” 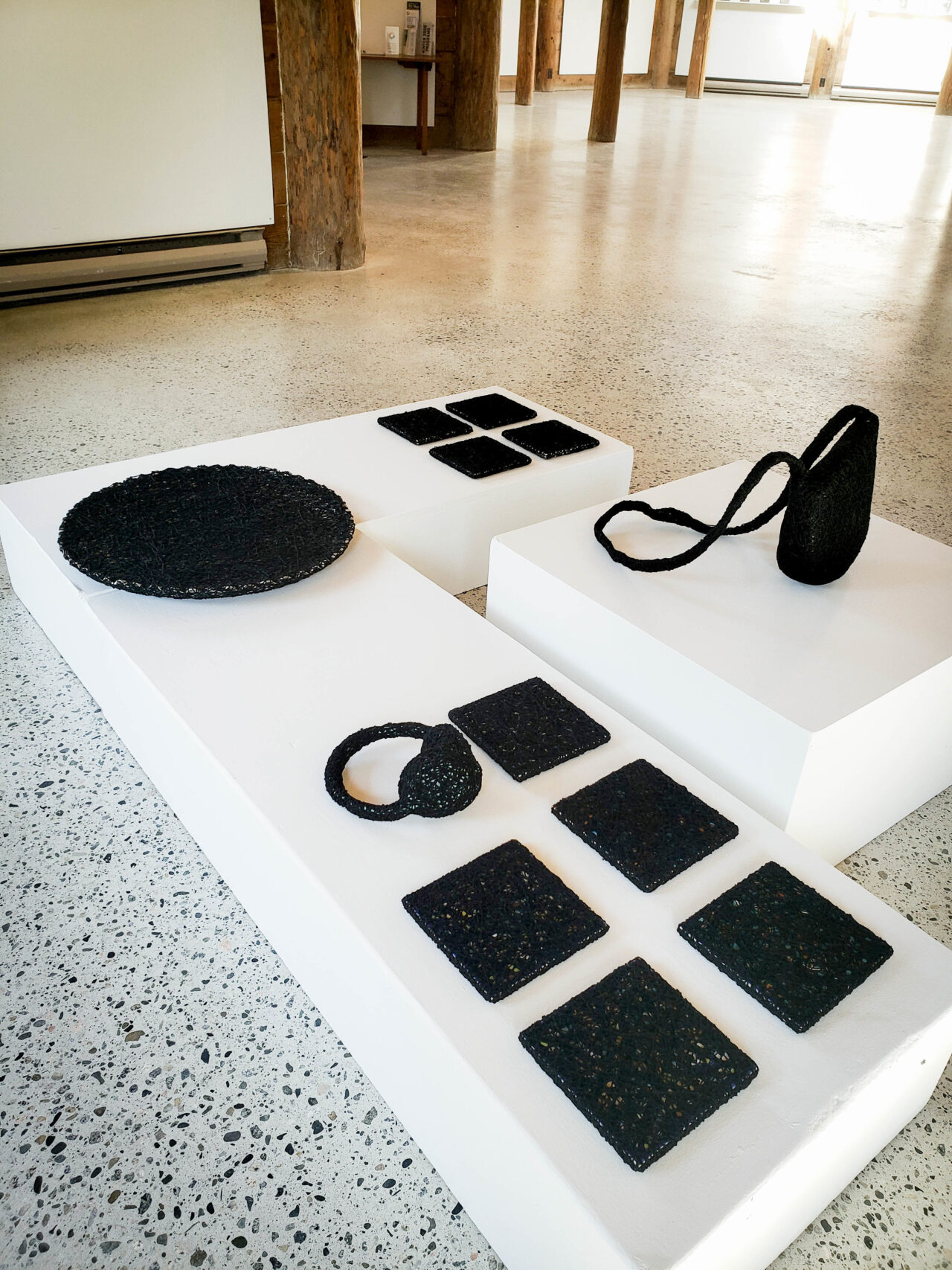 As with the strategy of using Persian-English to spotlight the dual cultural identities of the works, the choice of objects reflects a lived history of cultural exchange.

“I’m moving too. I’m in between the two cultures, but I’m also in between the generations of my parents and my children,” she says. “These objects [featured in the show] travel with me, and travel is an important element of this translation. And they’re all used objects, they’re all things that contain lots of memories. Like when you have objects you don’t want to throw out because they’re dear to you, but you have no use for them.”

Mehran points to a purse her mother bought for her, which she kept for many year even though she never used it. Such an object, she said, was a perfect candidate to be included in her show.

“I definitely wanted to wrap it, because it’s a memory of mom,” she says. “At the same time it was made in Iran but in a very Western style, so it was very much carried a lot of travel and translation.”

In wrapping these objects, Mehran says “you take the unusable and protect it, preserving the memories. So each of those objects come from some sort of memory like this.”

Mehran’s current work focuses on botanical drawings of West Coast plants, including researching their Indigenous names which have been erased by Western science. The drawings are being developed as part of her residency at Coppermoss, on the Sunshine Coast, though her research has also taken her to the Herbarium at the Beaty Biodiversity Museum, and seen her work with artist and ethnobotanist T’uy’t’tanat-Cease Wyss on an Artists for Kids mentorship program.

You can read more about Thread via the Coast Reporter or the Sunshine Coast Arts Council. You can also hear her interviews on Soundcloud and on CBC’s North by Northwest (the interview can be found in the May 23, 2020, episode, beginning at 1:53:14). You can also see more of her work on her website or Instagram.