By now, we’re all too familiar with stories of pandemic-era compromise. Projects that had to be put on hold or cancelled, events that were postponed indefinitely, or important work that fell apart when it was moved online. Each of these accounts is in its own way heartbreaking, if not infuriating, or worse.

But this isn’t one of those stories.

This story is about a group of women who, in the midst of lockdown, refused to give up on a project that, by all rights, they could have abandoned, and with good reason.

It begins in early 2020, as a group of roughly 20 foundation students gathered at ECU’s The Writing Centre for the first time, to brainstorm ideas for the latest edition of the Foundation Writing Anthology. The meeting was by all accounts a success, and the group agreed on a tentative title for the future collection of student works of poetry, critical analysis and creative writing: Points of Connection.

But as COVID-19 landed in cities across the globe, shuttering businesses and institutions — including Emily Carr — the project came to a screeching halt.

“In the middle of March, everybody scattered,” Jacqueline Turner, poet, writer, ECU faculty member and faculty coordinator of the anthology project, says.

“We thought we would still be able to gather together online and do the work that we needed to do, hold our meetings online and so forth. But that big group dwindled down, in the end, to just three people.”

Those remaining three were foundation students Parnian Amani, Kashish Hukku Jani and Hayley Ng. And according to Kashish, next steps were — at least at first — anything but clear.

"This had to be the one thing to go right. It felt like the finishing touch to my first year. Almost like a haphazardly wrapped present.”

“I remember, I was hanging out with Parnian, having dinner at her place, and she received a message from the university saying, ‘Schools are closed. There are no more classes,’” Kashish says. “And that was it. We had no clue what was going to happen next.”

What did happen, however, was that Kashish, Hayley and Parnian decided they were not ready to give up on the anthology.

“I actually pushed it aside for a month, but came back because I kept receiving these emails saying, ‘Are you still with us?’” Parnian recalls, adding that, upon returning to the virtual meetings, she was shocked to see how few team members were left.

“So I decided, ‘I'm going to stay here until it gets done.’ It kept repeating in my head that I’d made a commitment. One of my biggest values is to commit and to not break my promises.”

Hayley reports feeling a similar call to accountability as she took stock of what lay ahead.

“I'm pretty knowledgeable with InDesign and Illustrator, so I felt like I had a responsibility to Kashish and Parnian to step up and help them and kind of be the glue,” she says.

“I also felt like I had a responsibility to the anthology’s authors, because they spent all this time on their work. Some of them probably weren't considering submitting, but when they did, they felt really good about it. So, I really wanted to help give them that space they wanted for showcasing their work.” 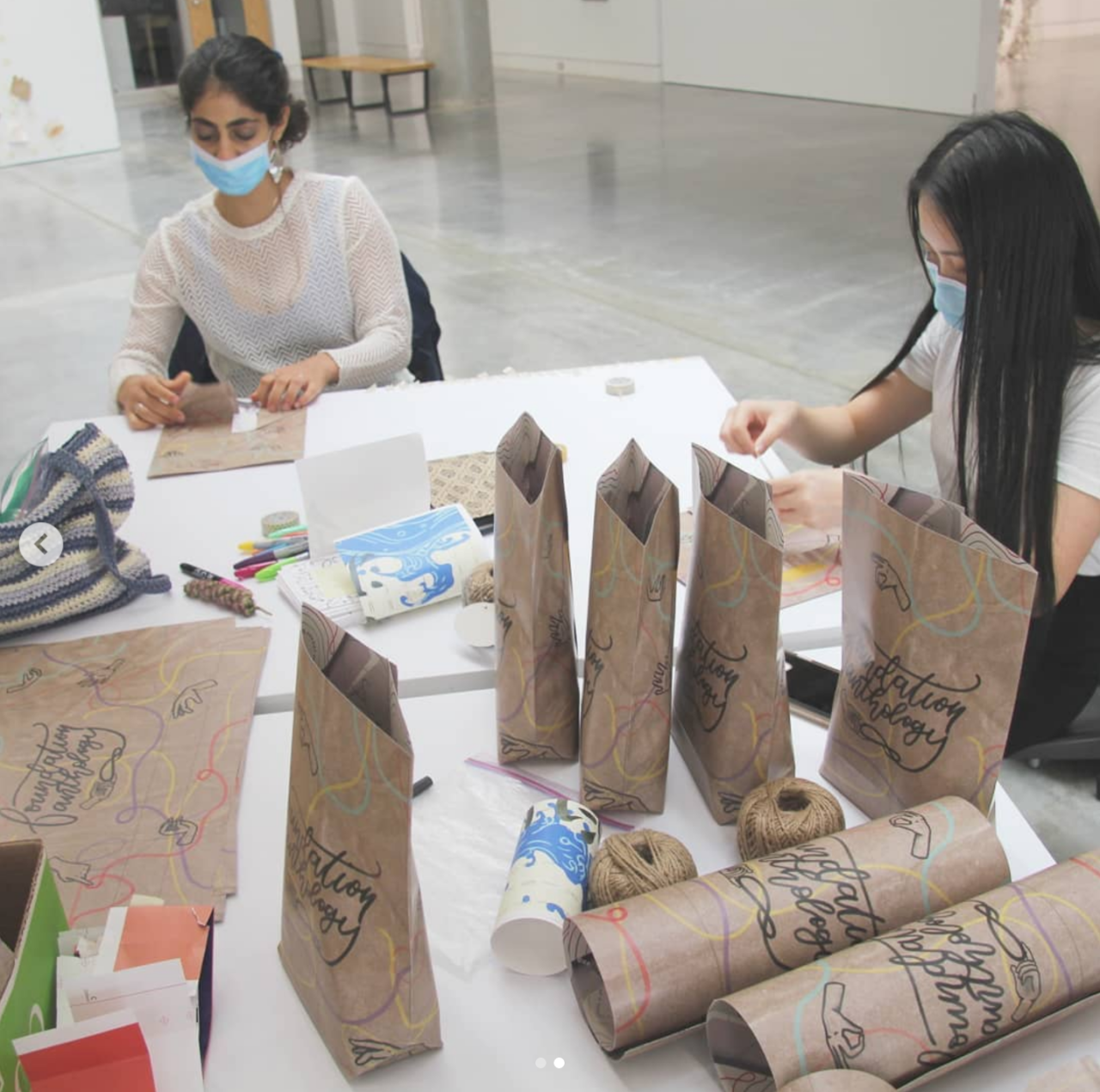 From @ecu_foundation_anthology on Instagram.
Parnian Amani (L) and Hayley Ng (R) at work assembling copies of the 2020 Foundation Writing Anthology.

For Kashish, an international student who grew up in India, the math was a little more complicated. As lockdown took effect, international flights were effectively cancelled, she says. Meanwhile, India was hard hit by its first wave, and her father — a doctor — told her to stay put, as he and Kashish’s mother felt it was unsafe for Kashish to return home.

Sheltering-in-place in a homestay in Vancouver, Kashish found herself struggling to find ways to keep occupied. She’d only recently begun to forge close friendships among her peers, who, under lockdown rules, now felt almost as distant as her family, thousands of miles away.

“In some respects, the anthology was the only thing that kept me going, kept my mind busy,” she says. “I had nothing else to do. No classes, no nothing. I really needed the anthology. And at the end of the journey, I got this really amazing publication, and I get to say, ‘I designed that.’ It became a really fun summer because of that.”

So, with guidance from Jacqueline and second-year student mentor Thu Le, who’d worked on the previous year’s anthology, the trio got to work. Hayley and Kashish focused on design, while Parnian tackled the editing.

Months later, and just in time for the start of their mutual second year, they delivered Points of Connection — a lovingly designed, string-bound collection of student writings, wrapped in a paper “bag” which folds out into a poster. 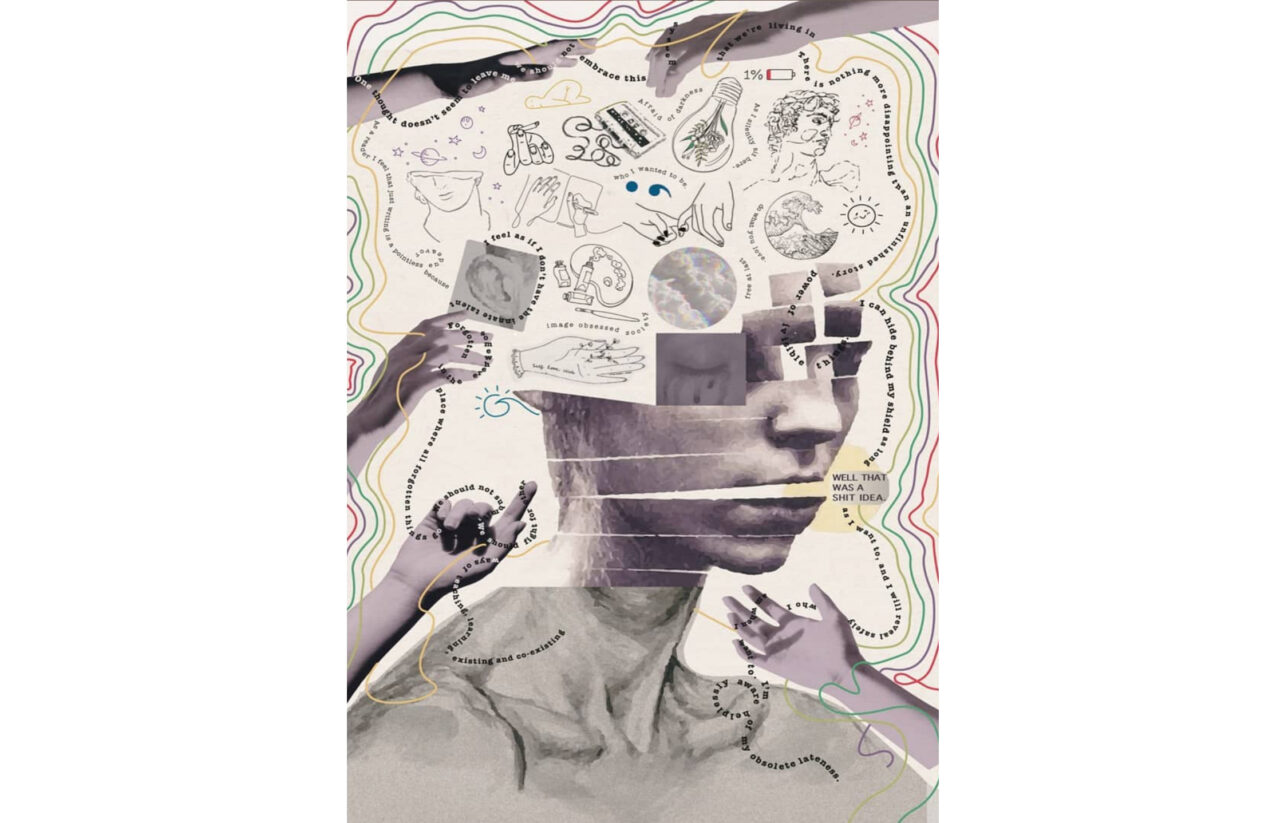 From @ecu_foundation_anthology on Instagram.
The 'Points of Connection' foldout poster.

Despite being produced primarily through remote collaboration at a moment when screens are increasingly central to daily life, Hayley says the resolute physicality of the anthology was never in question.

“We always had this mindset that it would be a physical copy,” she says. “It’s part of what kept us going. There’s just something about physical publications that makes everyone feel really good. It’s just not the same as having it online.”

Jacqueline says the production of a physical object takes on a broader significance when viewed in the context of the 2019-20 academic year, which even beyond the pandemic saw students faced with further school and space closures due to fire, and subsequent restoration efforts.

“I think they really wanted an artifact, like a memory piece or a reminder of that year — something that was activated or had a value beyond what it was initially,” she says, adding the students were “amazing” in their commitment to the project.

“It was such a strange year for that group of foundation students, with the fire and everything. Foundation students have that feeling of having come through something together. I think it’s the only year at Emily Carr where students are connected with each other in that sense.”

The team celebrated in late September with an outdoor launch event, at the Emily Carr outdoor arts plaza, where they gave out free copies of the anthology, as well as individually wrapped snacks, delivered to attendees by carefully gloved hands. 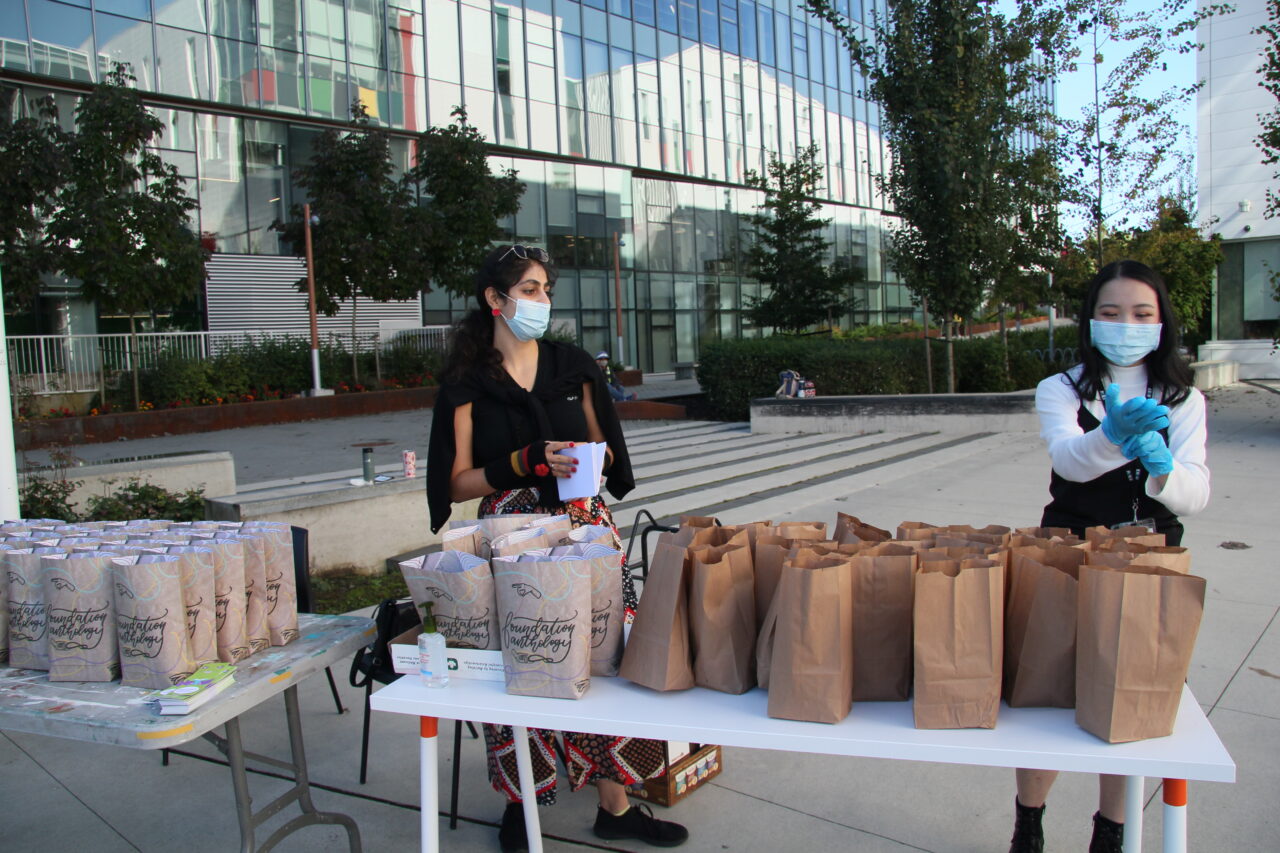 While Parnian, Kashish, Hayley and Jacqueline all express understanding for the individual pressures that lead many members of the original team to bow out of the project, they each also reported feeling an enormous sense of accomplishment, if not a kind of vindication.

“Because of [the pandemic and the fire], we kind of missed out on our first year,” Parnian says.

“The first term went by super quickly, and then the second term, I was starting to get to know people, to hang out, to get more work done … and then the pandemic happened. And I didn't feel like I had a community. But getting to read these works made me feel that connection, even if those people don’t know that it happened.”

And Kashish, much like Parnian, says completing Points of Connection felt a little like an overturning of the disconnection she had been feeling in the early days of lockdown — mostly because the writing of her peers gave her a window into their hearts and minds.

“There are just so many amazing ideas, and amazing people with such amazing thought processes that I would have never come across if it wasn’t for the anthology,” she says.

You can see more photos from the production and launch of Points of Connection on Instagram, now. 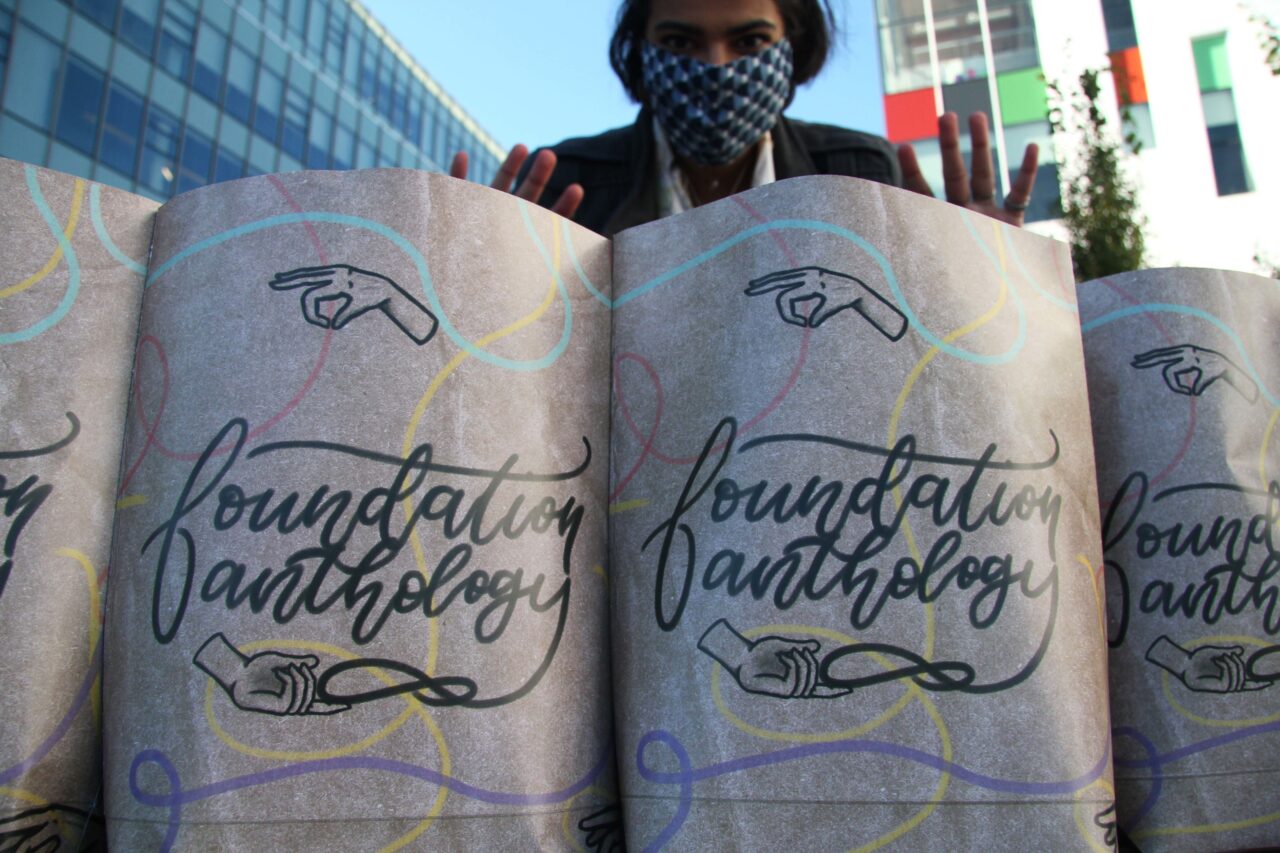