A new exhibition of works by artist and ECU faculty member Christine Howard Sandoval at the Contemporary Art Gallery (CAG) explores the relationships between land, language, image and archive, according to exhibition co-curators Julia Lamare and Kimberly Phillips.

The show, entitled A wall is a shadow on the land, brings together drawings, adobe sculptures, and documents from both personal and public collections, as well as an installation at the CAG’s permanent satellite site, at Yaletown-Roundhouse Station.

“With A wall is a shadow on the land Howard Sandoval makes present Indigenous ways of thinking about space and time, and unsettles the archive through the act of embodied making, enlargement, recontextualization, and collage,” Julia and Kimberly write in their introductory essay.

“The stratum of material across spaces encourages multiple entry-points for interpretation, calls into question the use-value of the image, and resists the archive’s power to cement colonial pasts. Howard Sandoval’s act of archival dislodging and material reclamation is an utterance in unlearning history.” 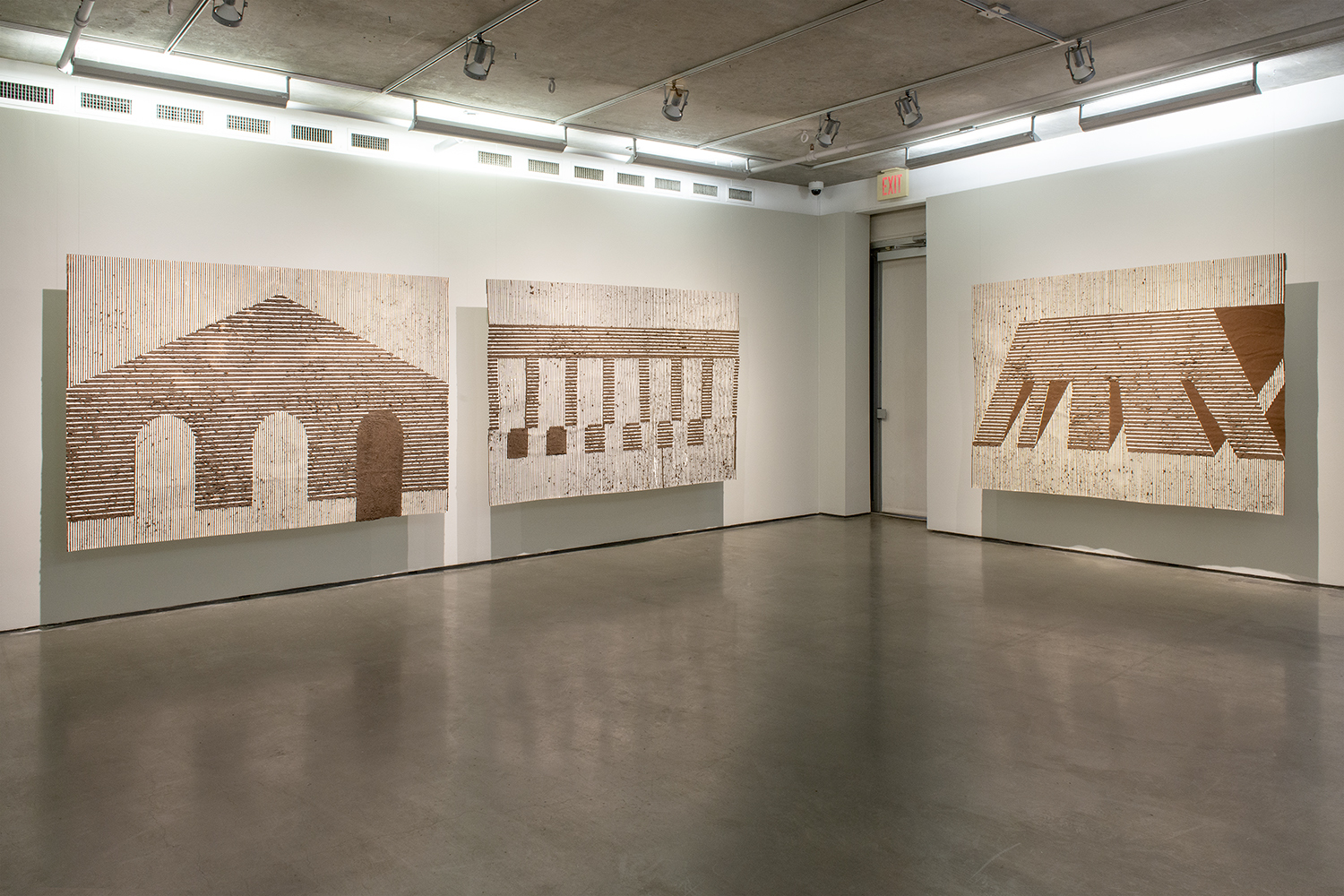 Christine Howard Sandoval, installation view from 'A wall is a shadow on the land,' Contemporary Art Gallery, Vancouver, January 22 – May 2, 2021.

Centre-stage in the CAG exhibition is Christine’s use of adobe — a composite of sand, clay, water, and straw or grass, used to make a “sun-baked mud brick.” Christine, an Obispeño Chumash and Hispanic artist, belongs to a family whose members include generations of women who worked as adobe brick makers.

This ancient and commonly used Indigenous building material has “become synonymous with the structures built by Spanish missionaries who colonized the Pacific Coast of the United States from the seventeenth century onwards.”

The large-scale wall works in A wall is a shadow on the land are created by drawing with masking tape on paper, and then applying a thick layer of adobe overtop. The masking tape is then removed before the mud can dry. A resolutely physical composition emerges, “at once quoting and flattening the elemental forms of the Spanish mission architecture vernacular,” Julia and Kimberly write.

“By rendering her images with the very building material of the iconic architecture, Howard Sandoval resists its colonial appropriation, reclaims its deep history and asserts a new visual language for its encounter.” 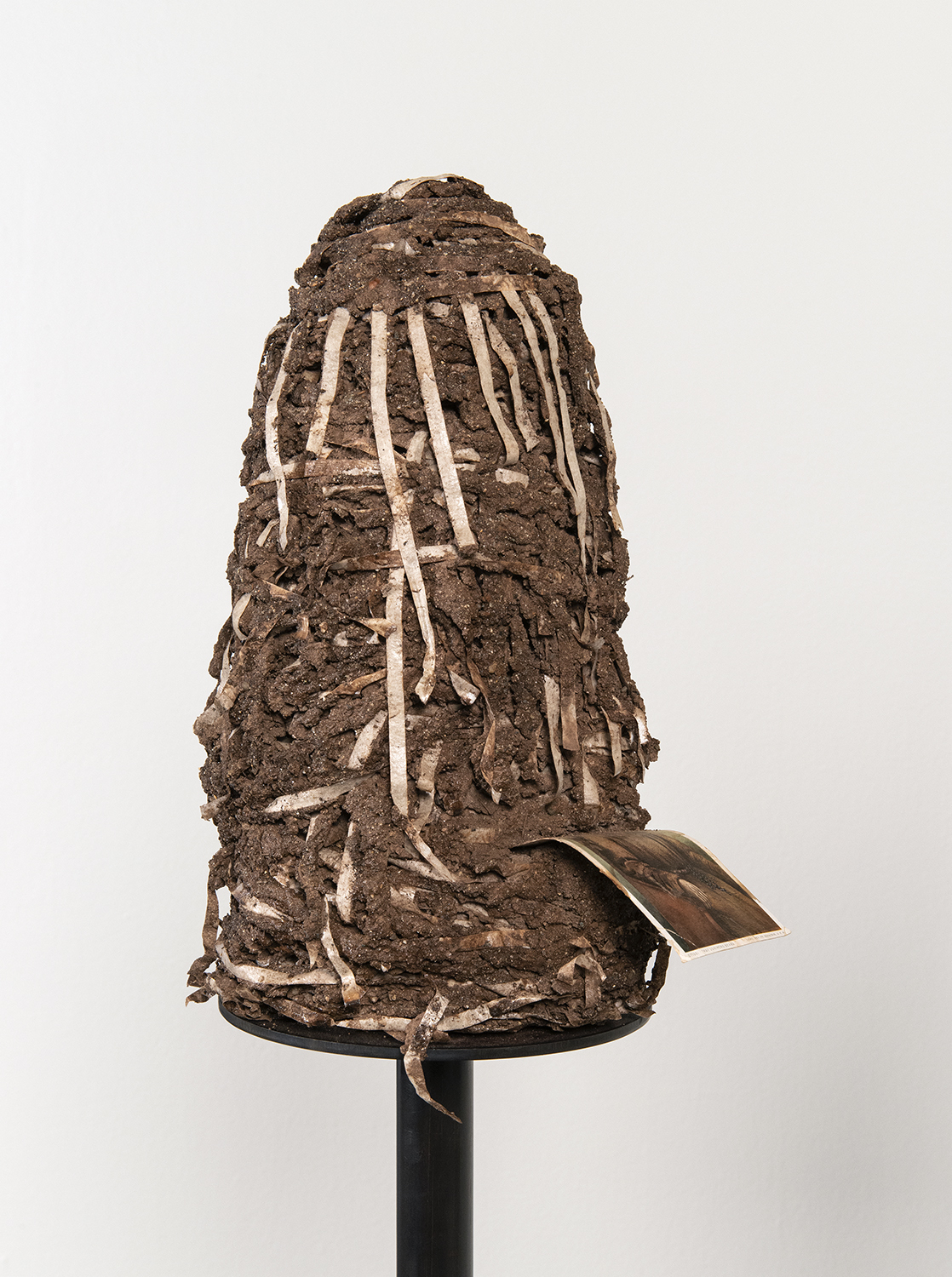 Nearby in the gallery stand a series of adobe forms, primarily sculpted from masking tape and adobe — materials cast off during the creation of the wall works. Protruding from the forms, partly obscured by the adobe, are postcards. Each card features a portrait of Father Junípero Serra — a Franciscan friar and a central figure in the proliferation of Spanish missions in central and southern California.

“Wedged into the growing mass of mud brick, [the postcards] are quite literally held fast and obliviated by the land,” Julia and Kimberly write. “Through the use of adobe, Howard Sandoval considers how land is and has been inhabited, the stories that are embedded in it and the potential futures it holds.”

At the Yaletown-Roundhouse train station, an installation entitled Archival—for Rosario Cooper and my 10 year old self, “considers the insidious meaning-making power of the colonial archive.” The station is wrapped in a series of overlapping documents and images, including a reproduction of a drawing Christine made as a child. The work is a red-eyed portrait of the same Father Serra who appears in the postcards half-buried by adobe in the gallery.

“The skeptical dutifulness with which the young Howard Sandoval rendered the portrait, and the ubiquity of such Eurocentric curriculum, brings institutionalized education methods and the ways in which narratives of colonial erasure are rehearsed within the public school system into sharp relief,” write Julia and Kimberly. 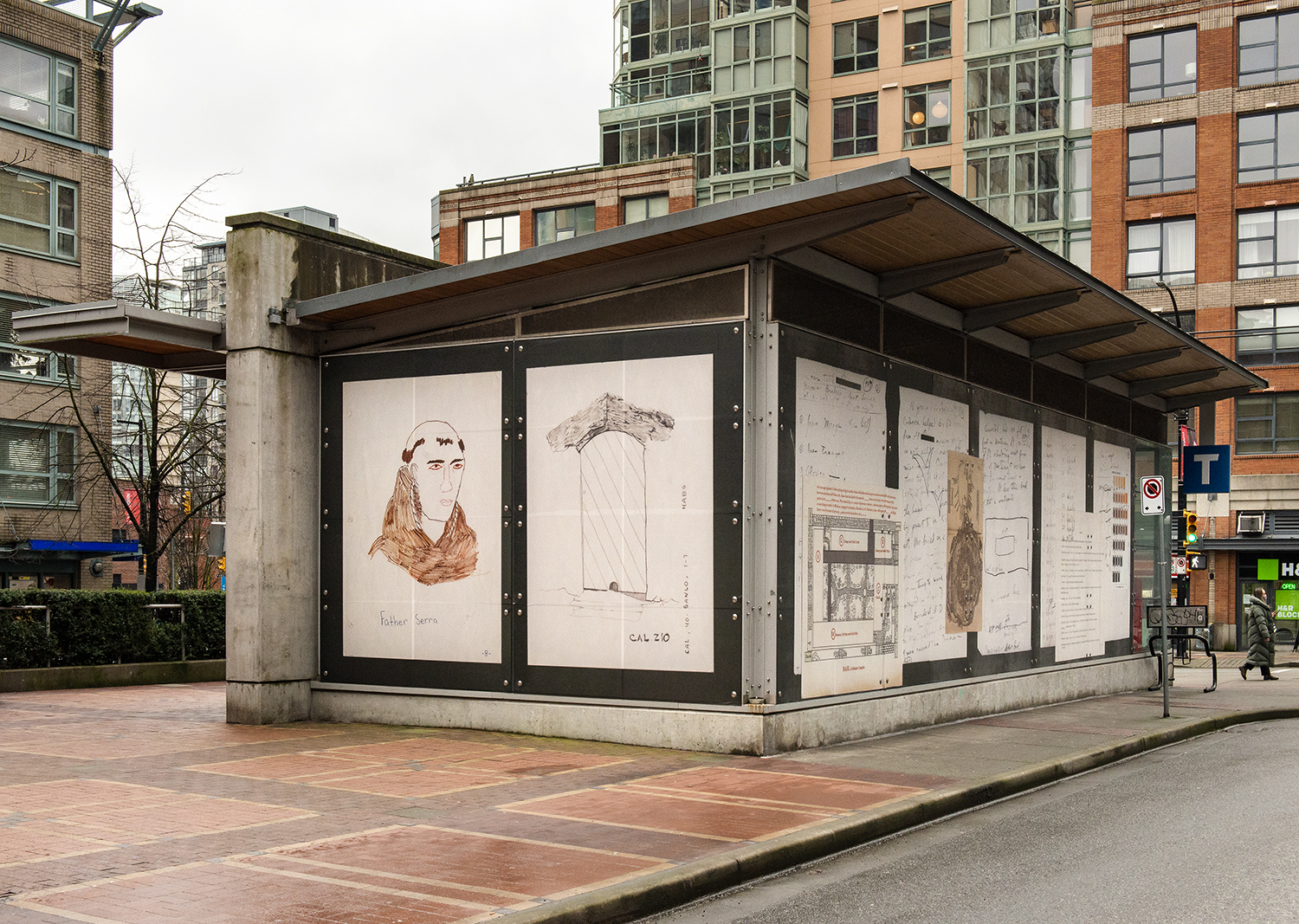 You can view all of the works in A wall is a shadow on the land in person, Tuesday to Sunday through May 2, at the Contemporary Art Gallery on Nelson Street in Downtown Vancouver. You can learn more about the exhibition — and download a PDF of Julia Lamare and Kimberly Phillips’ excellent introductory text — on the CAG’s website. And don’t miss Christine’s public work, Archival—for Rosario Cooper and my 10 year old self, at the CAG’s off-site location at Yaletown-Roundhouse Station, on the corner of Mainland and Davie Streets.