A new collaborative book by students and faculty at Emily Carr University and the University of British Columbia (UBC) explores the topic of anti-racism through art and experimental narrative.

Titled To Become the Next Generation’s Ancestors, the book was initiated and curated by artist and ECU faculty member Dan Starling, with partial funding provided by the ECU Faculty Association’s Decolonization and Indigenization Fund.

According to Dan, the project was sparked by an interest in providing an opportunity for local artists to imagine alternatives to the status quo, and to exercise a creative response to the topics of social justice, equity, and intergenerational change.

“I wanted to open a space for collaboration around these ideas that was a little bit less definitive or prescribed; to just allow for dialogue around these issues,” Dan says.

The book began with a call for contributions in the fall. Artists were invited to consider how artistic forms could express solidarity with the project of anti-racism in their community, and more broadly. Seventeen artists in total were brought on as contributors. 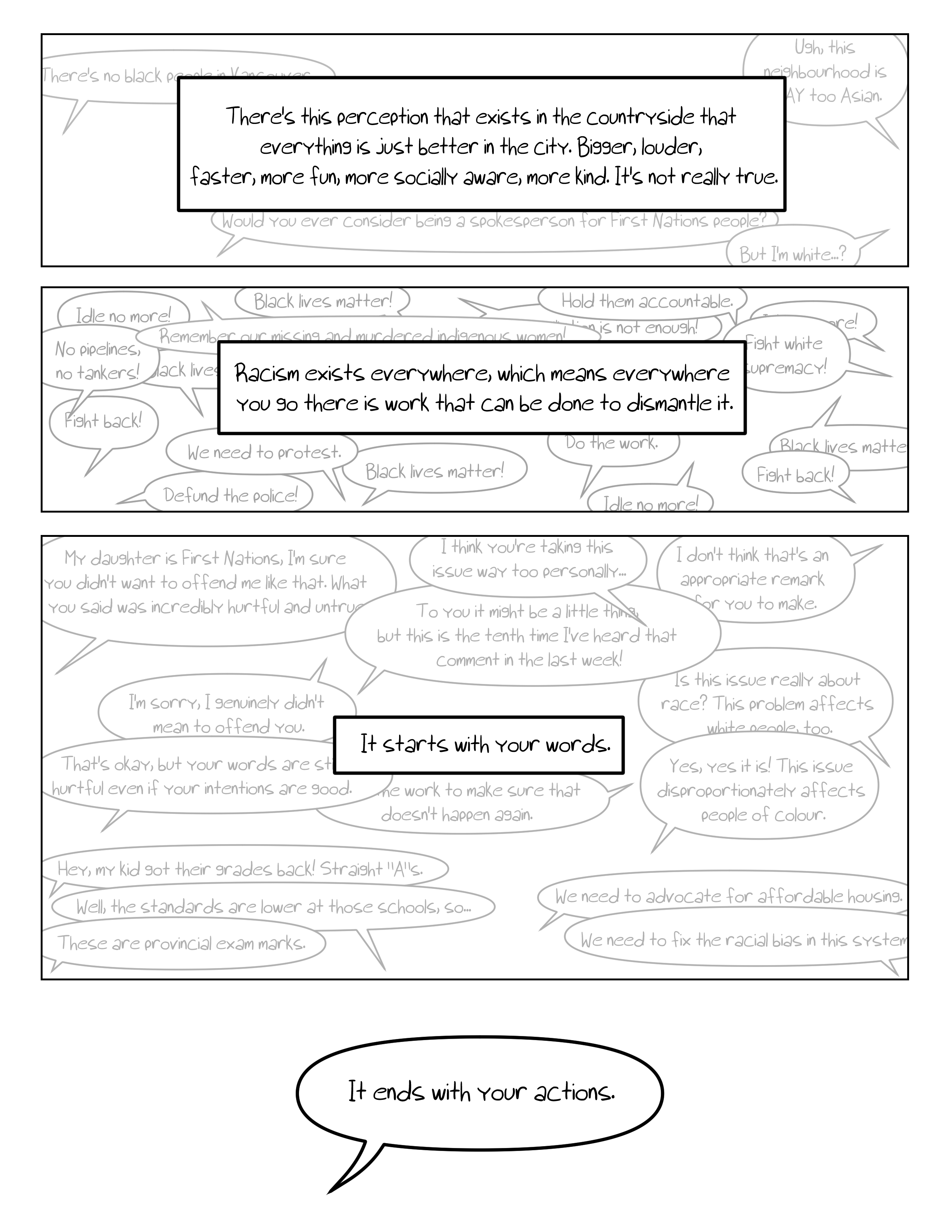 River Kero, UNKNOWN (the first step on the new path).

Artists Amory Abbott & Jenna Kirouac (who worked as a team), Wake Cook, Felicity Crisp, River Kero, Woojae Kim, Rachel Lau, Natalia Soto Leites, Mandana Mansouri, Megan McClennon, Al McWilliams, Vicky Chia Wei Mo, Sunny Nestler, Rachel Ogbunigwe, Damla Tamer, Clare Yow and Marlene Yuen were each assigned a chapter (or “stage”) that was associated with a brief prompt. Prompts included “ORDINARY WORLD. The given,” “DISRUPTION also known as the ‘CALL TO ADVENTURE’ (What disturbs the status quo),” and “RENEWAL of outlook and position / Creation of a new community.” The artists were encouraged to interpret their prompt in any way they chose.

Taken collectively, their responses amount to a stunning journey through disciplines and perspectives. The works in To Become the Next Generation’s Ancestors range from raw to polished, from gestural to exacting, from pure text to photography to collage to diagram to comic strip, and beyond. Each section provides its own arresting glimpse of a unique world of images and ideas. As a whole, the book is a rich visual and textual territory that can be explored over and over.

And while a description of a book’s themes often appears as an introduction in the earliest pages of a volume, Dan made the decision to place the explanatory text for Next Generation’s Ancestors at the very back of the book. The move sets the work up to be experienced free from expectations, Dan explains.

“Not telling people how to think about the work is about demonstrating a certain trust in the viewer, in terms of giving them space to engage with the book to whatever extent they want to engage with it,” he says. “It’s about allowing people to let the work just wash over them and to experience it on their own terms before they try to figure out what it is, or what it’s all about, or have to get too involved making judgements about it. Hopefully they can just enjoy themselves in the process, and think about what that means afterwards.” 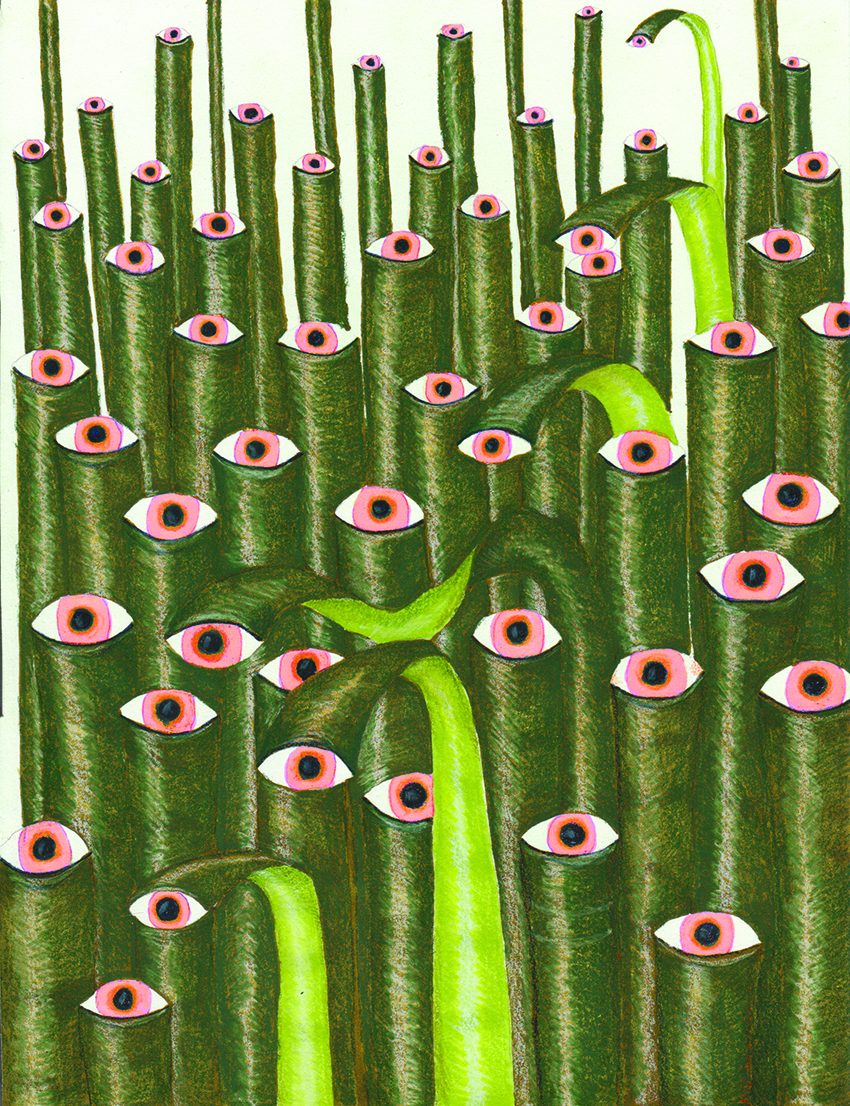 Sunny Nestler, DECISION to act or not. (Something has happened and action is necessary).

For those readers who desire a guiding light, the book’s title provides a polestar. Named for the first work in the book, by Vicky Chia Wei Mo, Dan says To Become the Next Generation’s Ancestors points directly to a preoccupation for many contemporary artists.

“I see a lot of artists — artists who are more established, for sure, but especially younger artists — who are thinking about themselves becoming the ancestors of the future generations, and how what we’re doing now will shape the future for those that come after us,” he says. “So, I thought using Vicky’s title for the book was a good way to frame the broader conversation about the ongoing, intergenerational work of anti-racism.”

While a few physical copies of the book currently exist, they were first printed during BC’s brutal third-wave — a time when the possibility of a book launch seemed lightyears away. But digital copies are still available. And with the province’s gradual reopening moving along on schedule, Dan says he’s hoping to be able to gather the artists and readers together sometime soon to celebrate the collaborative achievement.

“Especially after this year of everything being digital, actually having created a physical printed book is a pretty exciting prospect,” he says.