Once, it happened when she cut into a salmon. Another time, it emerged while peering at the feather of a flicker she’d picked up off the ground.

For Coast Salish artist and designer Angela Marston (Statu Stsuhwum), inspiration isn’t turned up during a search. It’s arrived at through a process of paying careful attention to the world.

“The majority of the work that I do really reflects nature and the designs I see in it,” says Angela, who, as of November 2020, has been working as Aboriginal Programs Coordinator at Emily Carr University. “I was filleting a fish one time, and a design came through just from the way that I cut the fish. That’s mostly how my designs are created.”

This approach is evident in the Four Elements Healing Rattles series, one of Angela’s more widely shown bodies of work. (The set of four rattles is now part of the permanent collection at the National Gallery of Canada). Angela describes growing up on Vancouver Island as a time wholly occupied by attunement to the natural landscape.

“I spent many hours patiently waiting to see blossoms bloom, for the salamanders to come out from hiding, for the birds to fly overhead and berries to ripen,” she writes in an artist’s statement about the Healing Rattles. “I drank the rainwater off of the maple leaves, and ate the roots of ferns. I walked bare foot on pine needle trails that were soft and smooth. I swam in the rivers and the oceans. I caught trout with my brothers and took them home.” 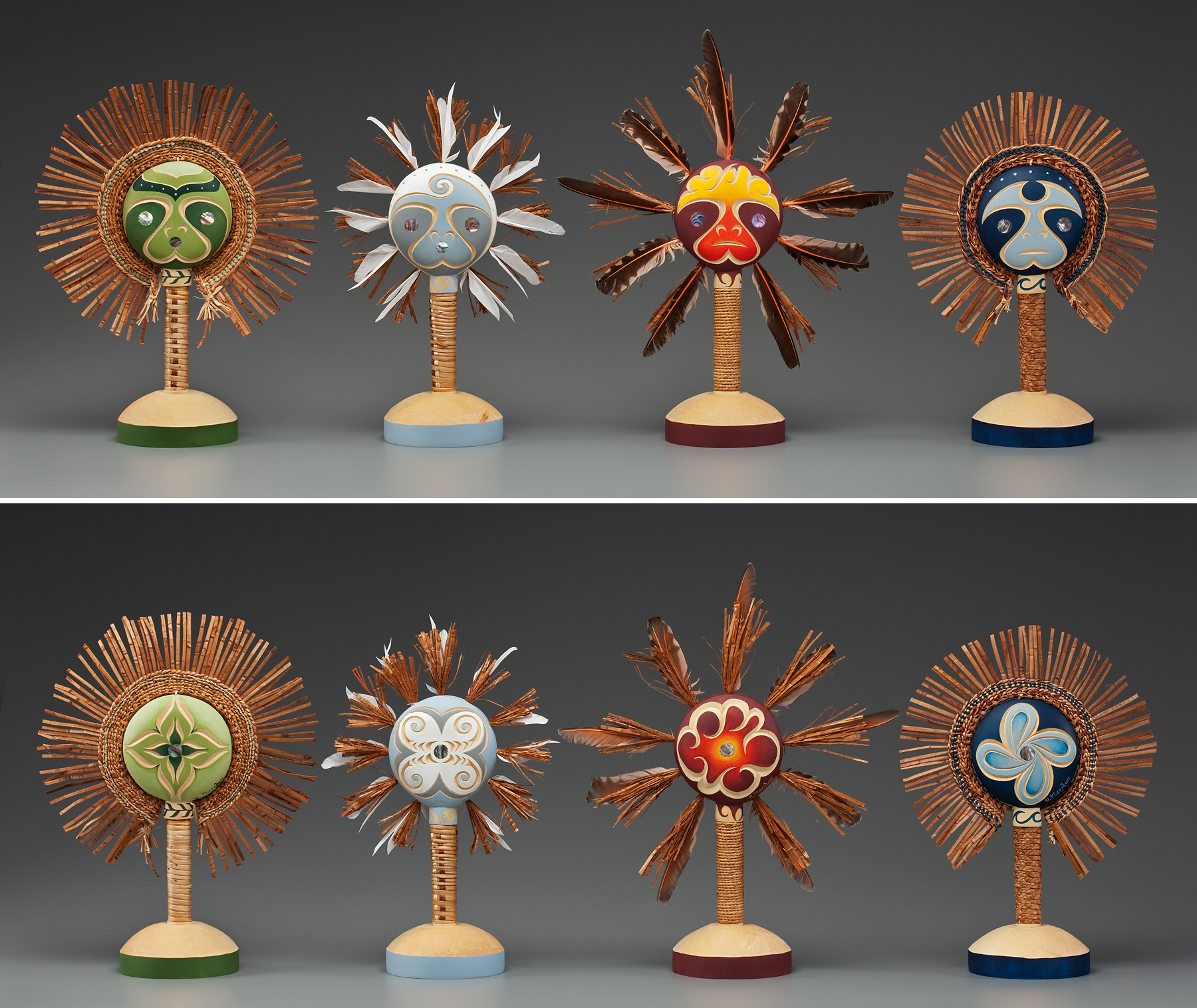 This vividly painted account is at once an anecdote and a glimpse of the source-code behind the Healing Rattles. It also reflects her belief that human beings and nature are connected; that the one is a part of the other.

The keen awareness Angela describes hasn’t relented in the intervening years. Rather, it has expanded to include more of the human-centric world. Some of her work reflects this shift, as well.

In one of her photographs, Angela herself is depicted. Her white-painted flesh bears red handprints, while her own hands are covered in what appears to be blood, wrists cuffed by a red rosary.

She only occasionally makes what she refers to as “political” art. But Angela’s curiosity about how ideas and beliefs are embodied in the living world remains visible, even when she takes politics as her subject. The photograph also offers a distinct counterpoint to the images she invokes in her statement on the Healing Rattles.

“At the time, that photo was meant to be a personal, internal reflection; even so, I think it’s an important work to share,” Angela says, noting it was taken roughly a decade ago. “The piece is not just about religion, but about identity: my skin is not light enough or dark enough; my hair is not dark enough. There’s a questioning towards our care for one another and for the world around.” 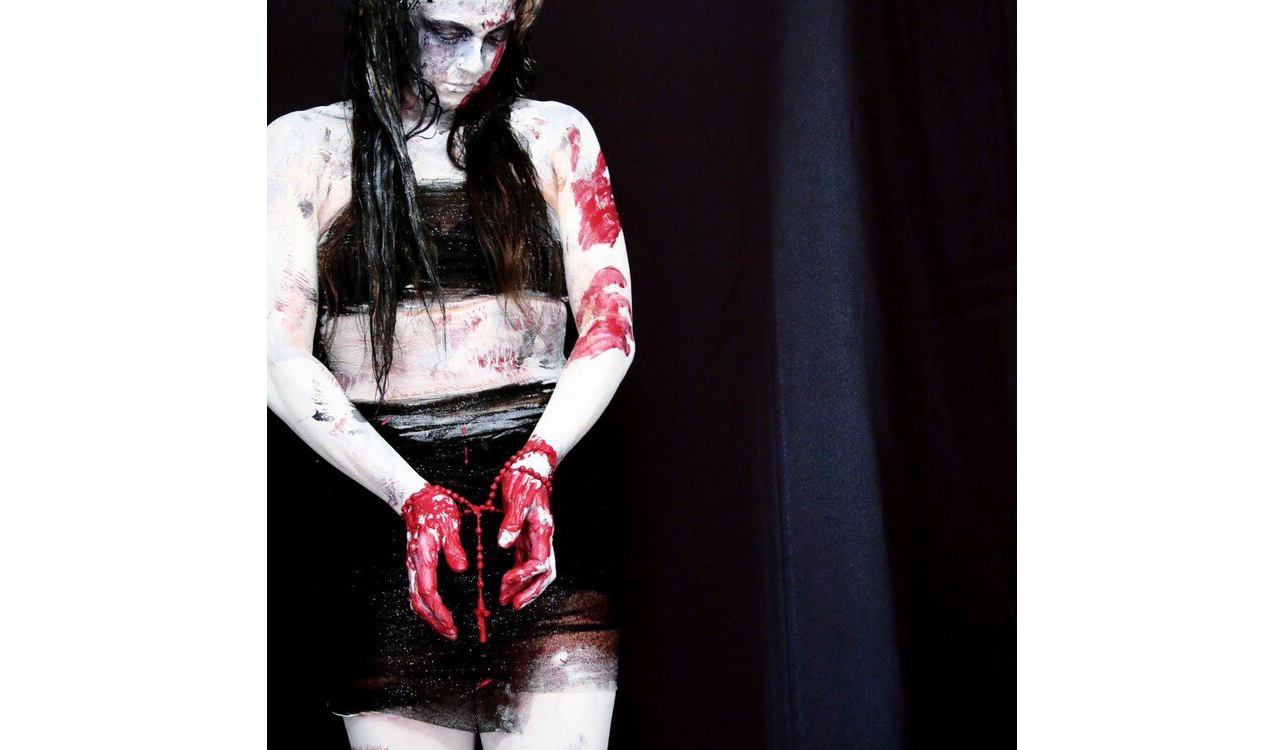 Working through her ideas via material practice was a natural fit for Angela. Coming from a family of artists, she recalls gravitating toward art-making almost before she understood what art was. Both her parents are accomplished carvers, and her brothers are artists as well.

“Being an artist, being creative has always been part of who I am,” she says. “I remember being five or six years old and picking all these plants and organizing them into a little arrangement — just grasses and whatever I’d found. I think that’s just always how I approached things.”

That instinctive drive led Angela to turn to myriad media for her work. Aside from sculpture and photography, she practices painting, carving, dying, weaving and herbology, some of which she studied under legendary practitioners. Kathy Edgar and Minney Peters were her weaving teachers, while Simon Charlie taught her medicine leading up to his passing in 2005. To this day, Angela regularly forages botanicals for oils and salves, and cedar roots and bark for her weavings and sculptures. 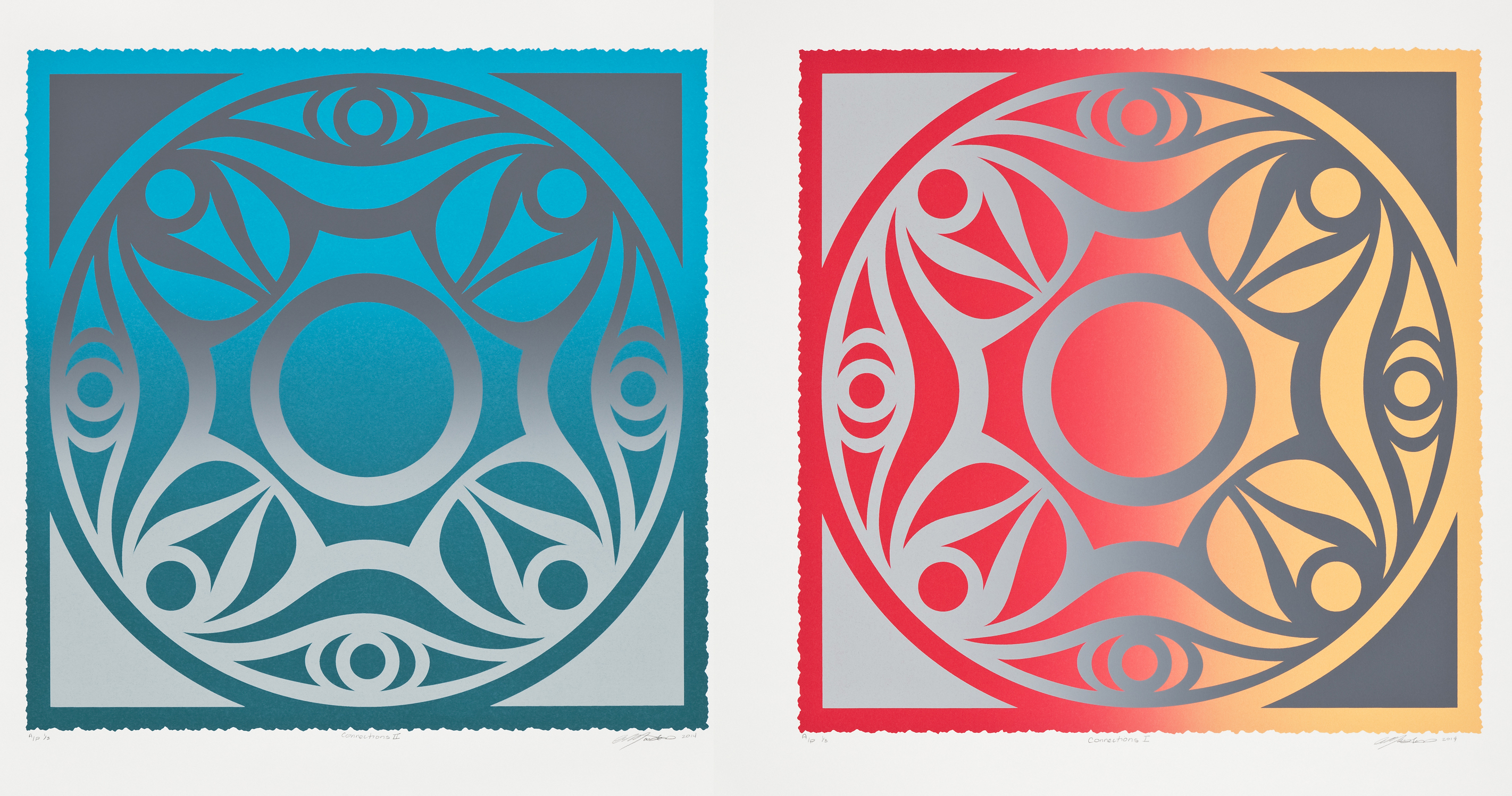 Meanwhile, her work with the team at the Aboriginal Gathering Place helps create greater access and build stronger networks for ECU’s Indigenous community members. Her current projects include a Speaker Series, which began just this month. The series will see artists including Red Buffalo Nova, Levi Nelson and Tracey Kim Bonneau speak on their practices and perspectives.

“I reached out to people whose practices are interesting, and who are also able to speak on difficult topics like colonization and decolonization,” Angela says. “There’s always the question of, ‘What does decolonization look like? And is it even possible?’ Often, decolonization efforts come from institutions, not Indigenous communities.”

Artist and designer Cory Douglas, another upcoming speaker, approaches these ideas both from an intellectual perspective, and through the lens of architecture, she says. Artist and curator Rose M. Spahan, another future guest, will be speaking on Indigenous curatorial practice. 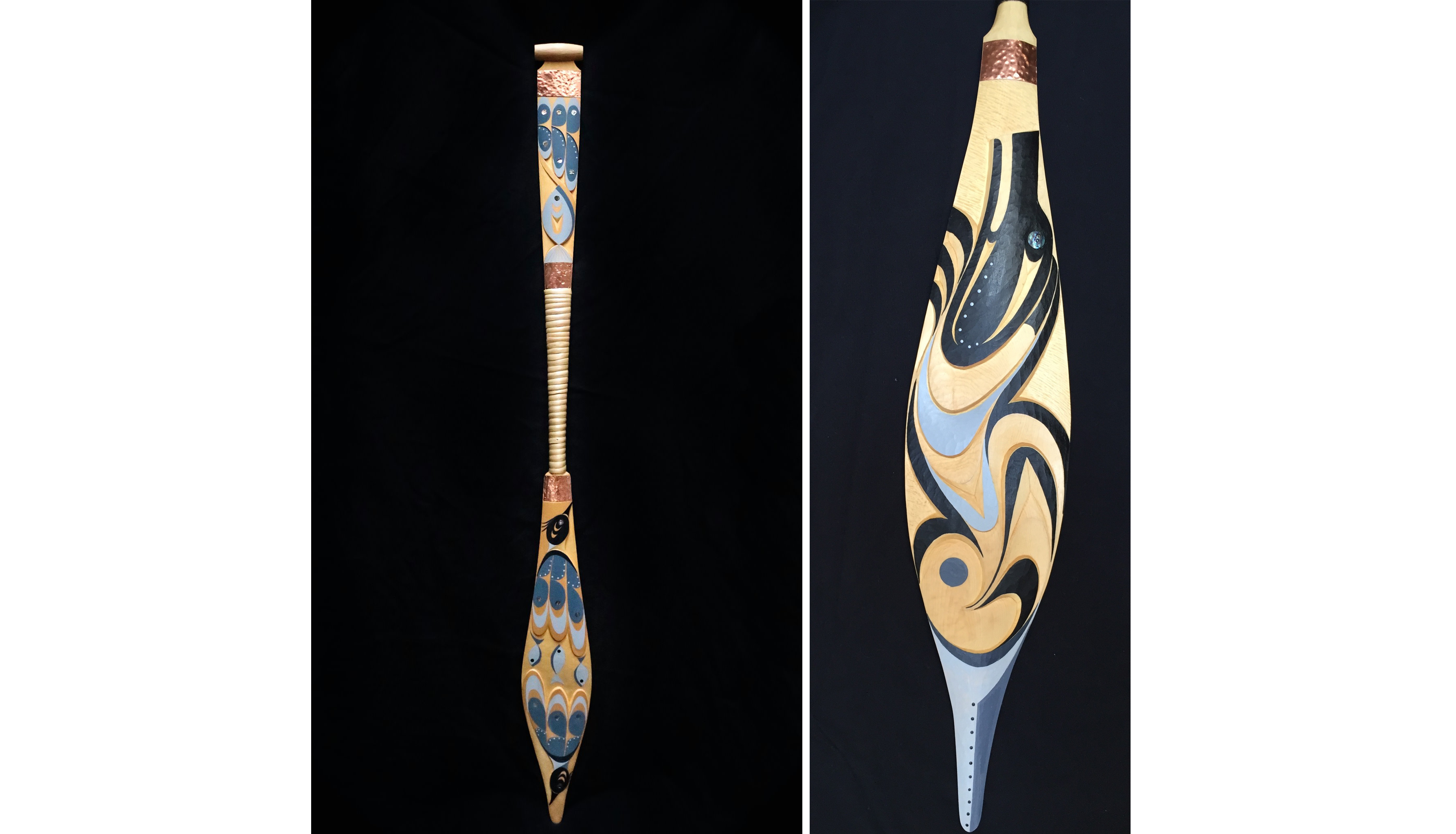 In what little spare time she has, Angela is hard at work on a solo exhibition, set to open at Coastal Peoples Gallery in Gastown, in 2022. She’s particularly excited that the gallery has expressed interest in all the different media she works in — a move she says is personally satisfying, and also speaks to the integrity of the gallery’s mandate.

“It is a commercial gallery, but the show isn’t being restricted to just carving or just the things that they’re sure to sell,” she says. “Not just carving, not just paddles, not just rattles. They’re opening it up.”

You can see more of Angela’s work on her website at angelamarston.com. And you can tune in to the next two editions of AGP 2021 Speaker Series: Levi Nelson, on March 10, and Tracey Kim Bonneau on March 17.