In 2015, at the opening for her Nerman Museum solo exhibition, To Honour the Unidentified, artist Gina Adams was approached by a friend, who hung a gift around her neck — a Grover Cleveland 1885 peace treaty medallion.

“I immediately felt the weight of it,” Gina writes in a statement recounting the “life-changing” experience. Gina is descended from Ojibwa Anishinabe and Lakota peoples of Waabonaquot of White Earth Reservation in Minnesota, as well as from settler Americans.

“I felt the weight of the years that had passed since the medal was made, but most importantly, the weight of the fact that very little has changed in 135 years. The words on the back read ‘peace and friendship,’ but they are hollow. The promises of truth and honour the medals were supposed to represent were never kept.”

Peace treaty medals were given to “deserving Indians,” Gina explains, where “deserving” most often meant obeying U.S. government agents — agents representing a settler government which did not uphold the treaties it signed; forcibly removed Indigenous peoples from their ancestral territories onto reservations; and took Indigenous children from their family homes and placed them into residential schools, oftentimes never to return. 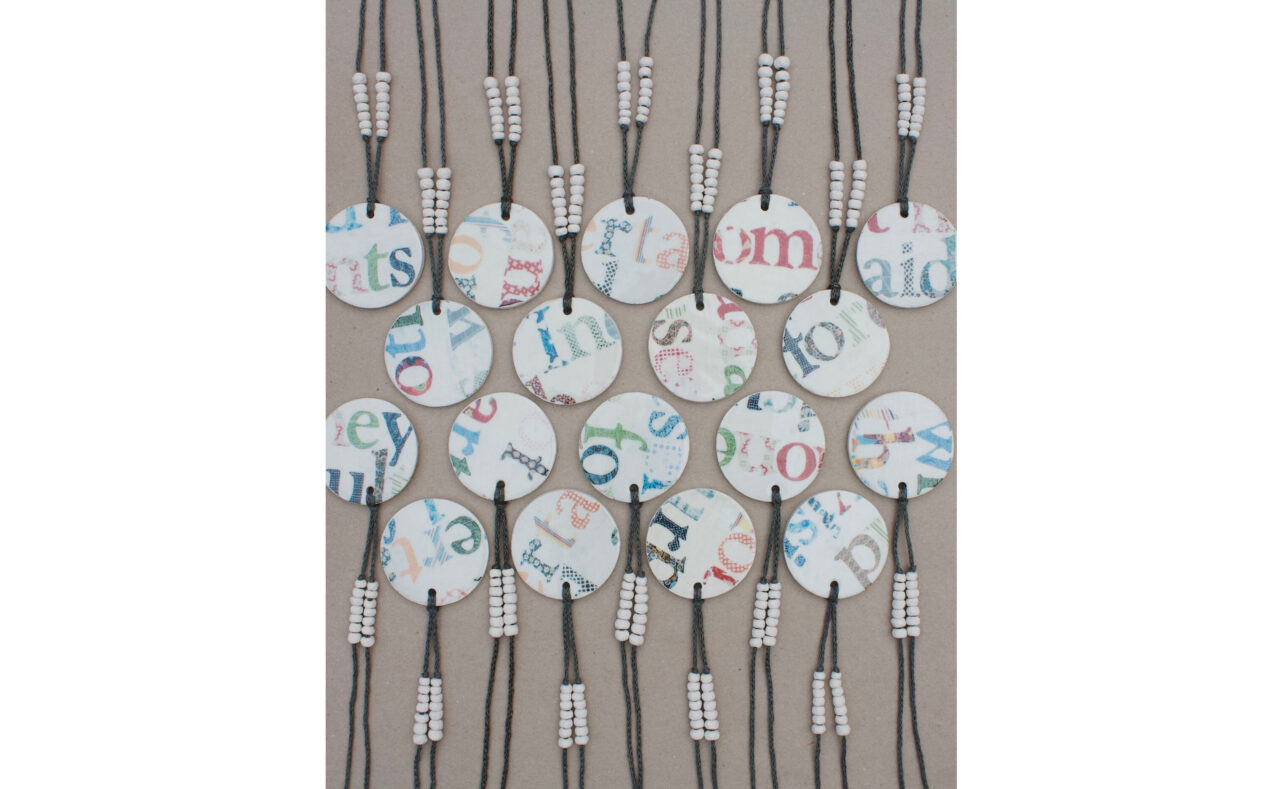 Gina, who is now an assistant professor at Emily Carr University, first became interested in the objects in 2013, after discovering photographs in the archives of the Spencer Museum in Lawrence, Kansas, depicting “chiefs of the plains” wearing the medallions. Having researched their histories in the years following, Gina drew on her Broken Treaty Quilts for inspiration.

(The Broken Treaty Quilts are a series of antique quilts reworked by Gina with handout calico lettering. The quilts quote examples of the 370 broken treaties between Indigenous American tribes and the U.S. government. One of the quilts, Treaty with the Yankton Sioux, 1837, is currently on view at the Crystal Bridges Museum of American Art in Bentonville, AR. The exhibition, called Crafting America, was the subject of a recent Wall Street Journal article. Treaty with the Yankton Sioux, 1837, was featured in that article).

“I have wanted to create a new peace treaty medallion for a long time, one that instigates change for the future, one where the wearer will commit to honouring the treaties and becoming an ally to Native American Nations and to Indian Country,” Gina writes. “How do we exist in contemporary society as healthy healing Ancestors and Allies? This question crosses race and class divides and asks our hearts and minds to do better.” 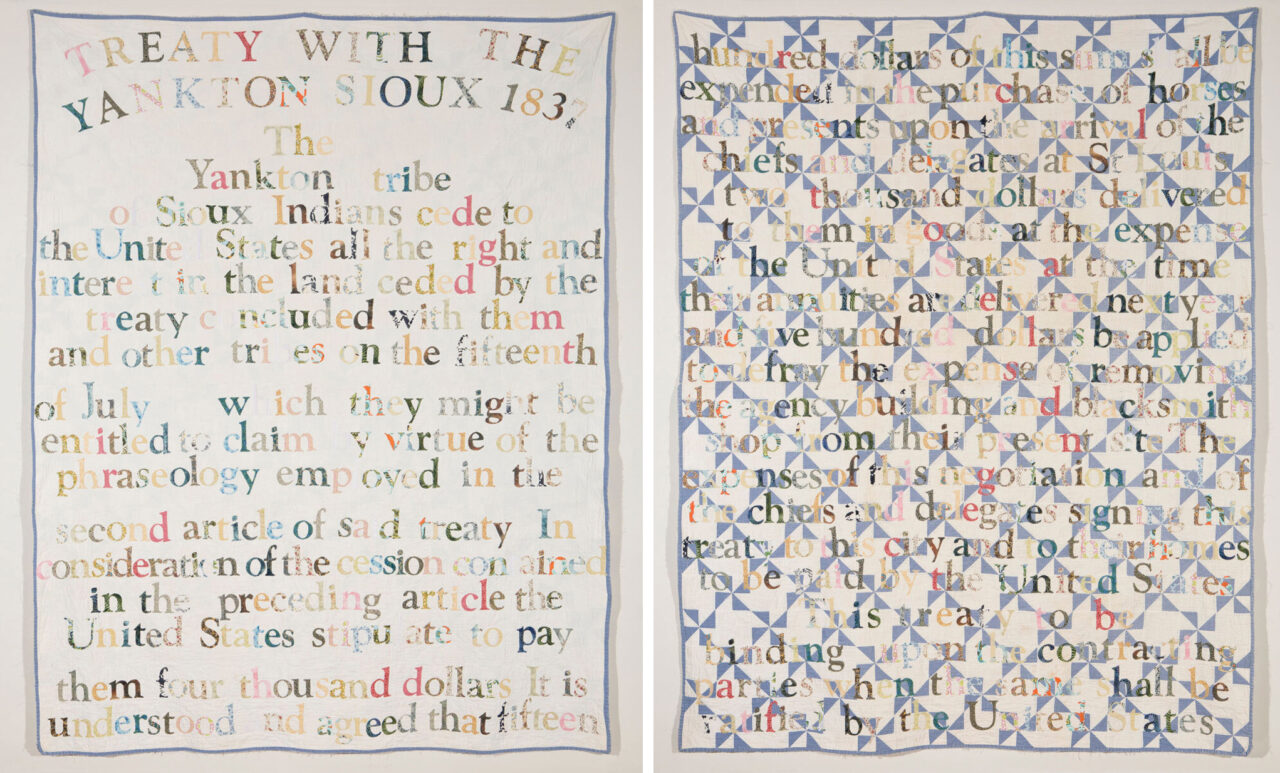 The resulting works, The Broken Treaty Medallions, were made in collaboration with artist and designer Annie Buchholz. Annie is also a member of Gina’s family.

The white porcelain discs feature text derived from one of the works in the Broken Treaty Quilt series: Treaty with the Chippewa of the Mississippi, 1867. This quilt, writes Gina, “has deep meaning to our family as our great-great-grandfather Waabaanaquot signed the treaty, as did a great-great-uncle Mishugiiziguk, which I discovered during [my 2016 Smithsonian Artist Research Fellowship]. Sometimes things that seemingly happen by accident are not meant to be kept quiet. For me this discovery signified the need to educate people about the existence of the treaties, making it personal so that more will take up the cause of honouring the treaties.”

Both the backs of the medallions and the 14 beads that frame each of them are imprinted with birch bark. The bark was collected by Gina and Annie while walking on their land in the northeastern U.S. 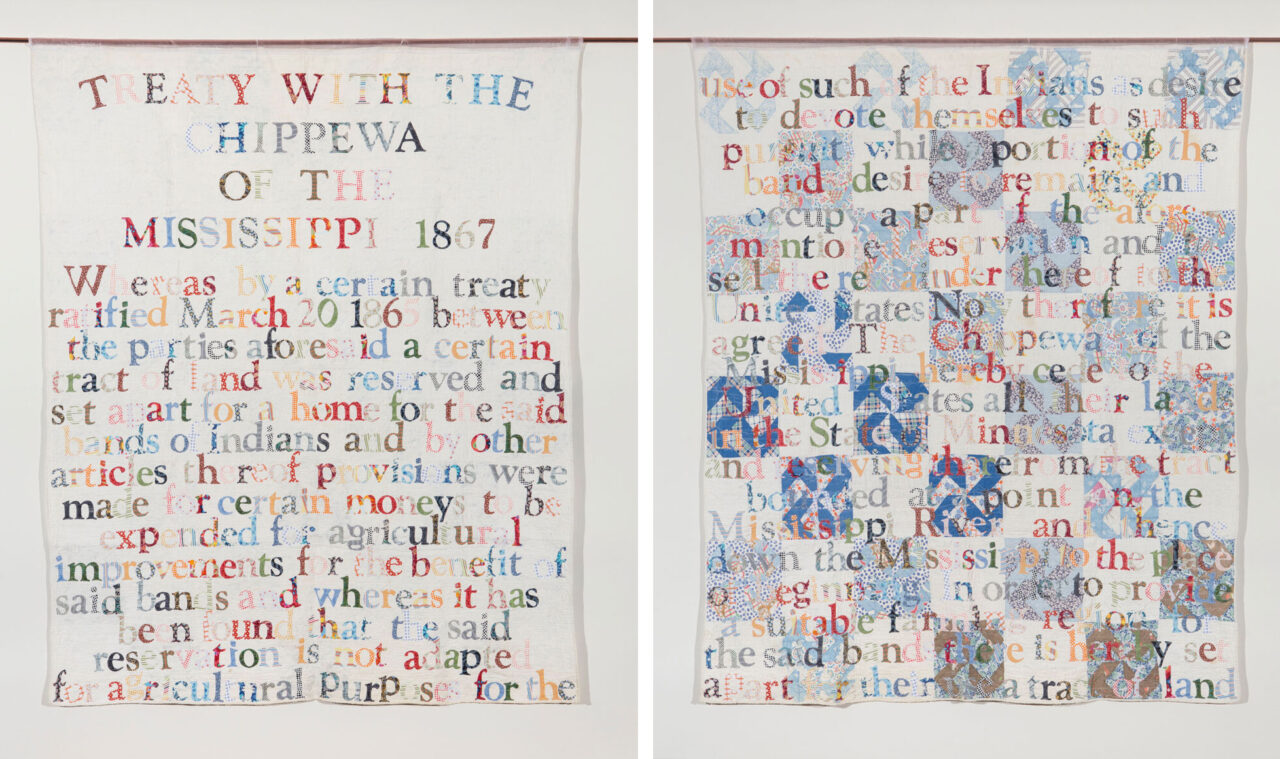 Image courtesy the artist.
Gina Adams, 'Treaty with the Chippewa of the Mississippi, 1867,' 2015. Hand-cut calico letters on antique quilt. Collection of the artist.

The final, limited edition of 100 medallions is being sold online, now, with 50% of sales going to the ArtTable Fellowship Program to support Native American women pursuing careers in museums and in the arts.

You can find out more about the making of the medallions, including via a video detailing their creation, on Gina’s website. There, you’ll also find Gina’s complete statement on the works.