Luke Parnell is Wilp Laxgiik Nisga’a (House of Eagles) from Gingolx on his mother’s side and Haida from Massett on his father’s side.

While Luke’s training has included a traditional apprenticeship with a master Northwest Coast Indigenous carver, his use of materials is “determined on a project-by-project basis,” according to OCAD University, where he works as Assistant Professor in the Faculty of Art. That open-minded approach to materiality is on full display in Indigenous History in Colour, which opens at the Bill Reid on Feb. 2. 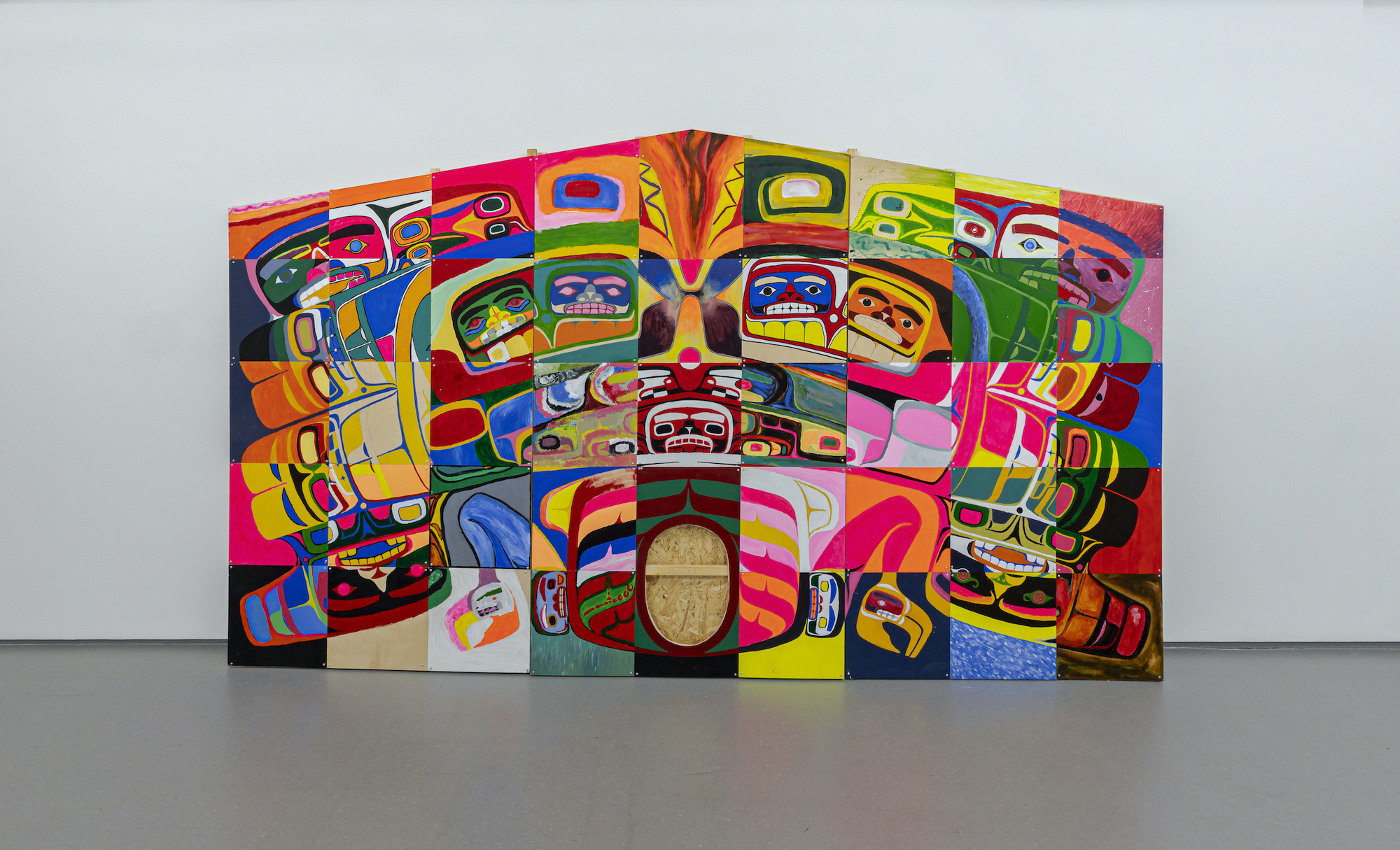 Works in the exhibition include last year’s collaborative installation, Neon Reconciliation Explosion (2020). The monumental artwork combines 44 panels to form a Northwest Coast housefront in Nisga’a style. Viewed together, the works reveal a formline butterfly design. Each of the panels was painted by “55 community members with bright neon colours, in reflection of their own personal understanding of reconciliation,” according to the gallery.

Luke’s contribution, by contrast, stands stark at the centre of the work — an unfinished lumber doorway marked by the initials “TF” and “CB,” in memory of Tina Fontaine and Colten Boushie. (Fontaine’s body was found in Winnipeg’s Red River six years ago; a man charged with her murder was found not guilty in 2018. Her case was one of many that led to the National Inquiry into Missing and Murdered Indigenous Women and Girls. Boushie was shot and killed by Saskatchewan farmer Gerald Stanley in 2016; Stanley was later acquitted of charges in the case. Both verdicts sparked Indigenous-led protests nation-wide, calling for justice for the slain teens).

“Research and exploration have become the basis of my artistic practice,” Luke says in a statement. “In order to understand histories and concepts, in order to explore emotion and contemporary events, I create artworks. My artwork asks questions but never answers them.”

2019’s Bear Mother “explores an ancient Indigenous narrative through the lens of pop culture, colour theory, and a striking collage effect,” the gallery writes. The work was initially created as a “digital sketch,” intended for social media in commemoration of National Indigenous Peoples Day. The vivid, chromatic grid work was turned into a large-scale inkjet print for exhibition. 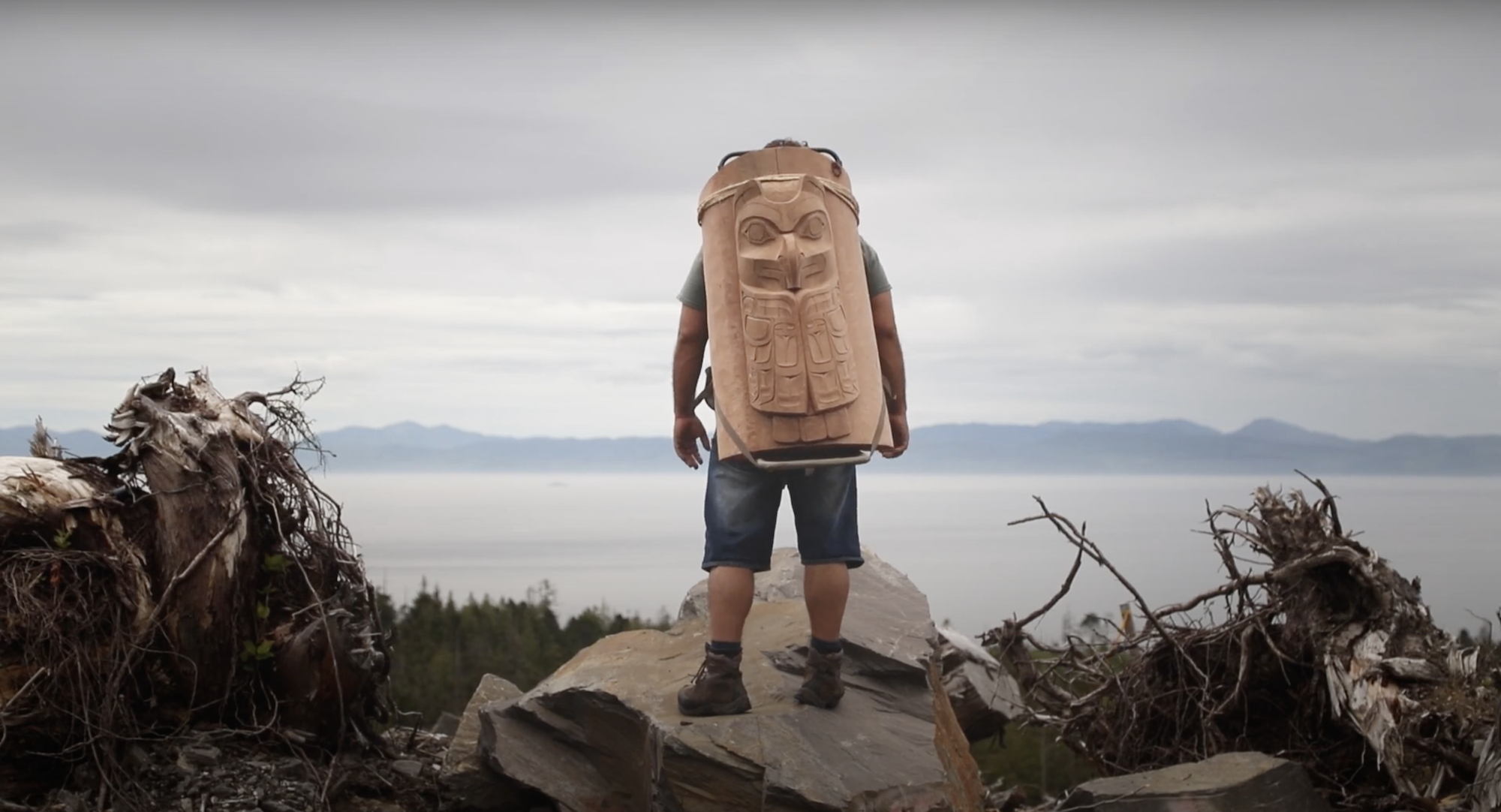 “​Indigenous History in Colour​ invites audiences to engage with the vibrant and dynamic qualities of Indigenous art, while also looking beyond the surface of popularized perspectives,” says Beth Carter, curator of the Bill Reid Gallery.

Also among the works in the show is Luke’s 2018 short film Remediation. The work examines the ongoing impacts of “the removal of ancient totem poles from Haida Gwaii, as a critical response to a Bill Reid documentary produced in the 1950s,” according to the gallery. The film follows Parnell as he crosses the country “carrying half of one of his own totems back to the coast, where it is then ceremonially burned.” The ashes from that burning as well as the other half of the totem will be shown in the gallery alongside the film.

A virtual opening celebration, featuring a conversation between Luke and Beth, will take place on Facebook Live on Tuesday, Feb. 2, at 6pm. For more details, visit ​billreidgallery.ca​. Indigenous History in Colour shows at the Bill Reid Gallery through May 9, 2021.