Artist Otilia Sabina (BFA 2013) needed a break. It was summer, and after a tough year navigating pandemic uncertainty, Otilia found herself being sucked into social media more often than she’d like.

“I was finding I was spending way too much time on Instagram, and it became a kind of trap for wasting time when I didn’t know what to do with myself,” Otilia, who also works as an International Student Advisor at Emily Carr University, tells me via video chat. “So, I removed myself completely.”

In deleting the app from her phone, Otilia was also effectively cutting off communication with anyone interested in contacting her about her art practice.

“I think I only have around 200 followers, so I just assumed no one was looking at my profile. No one cared.”

The opposite was true. 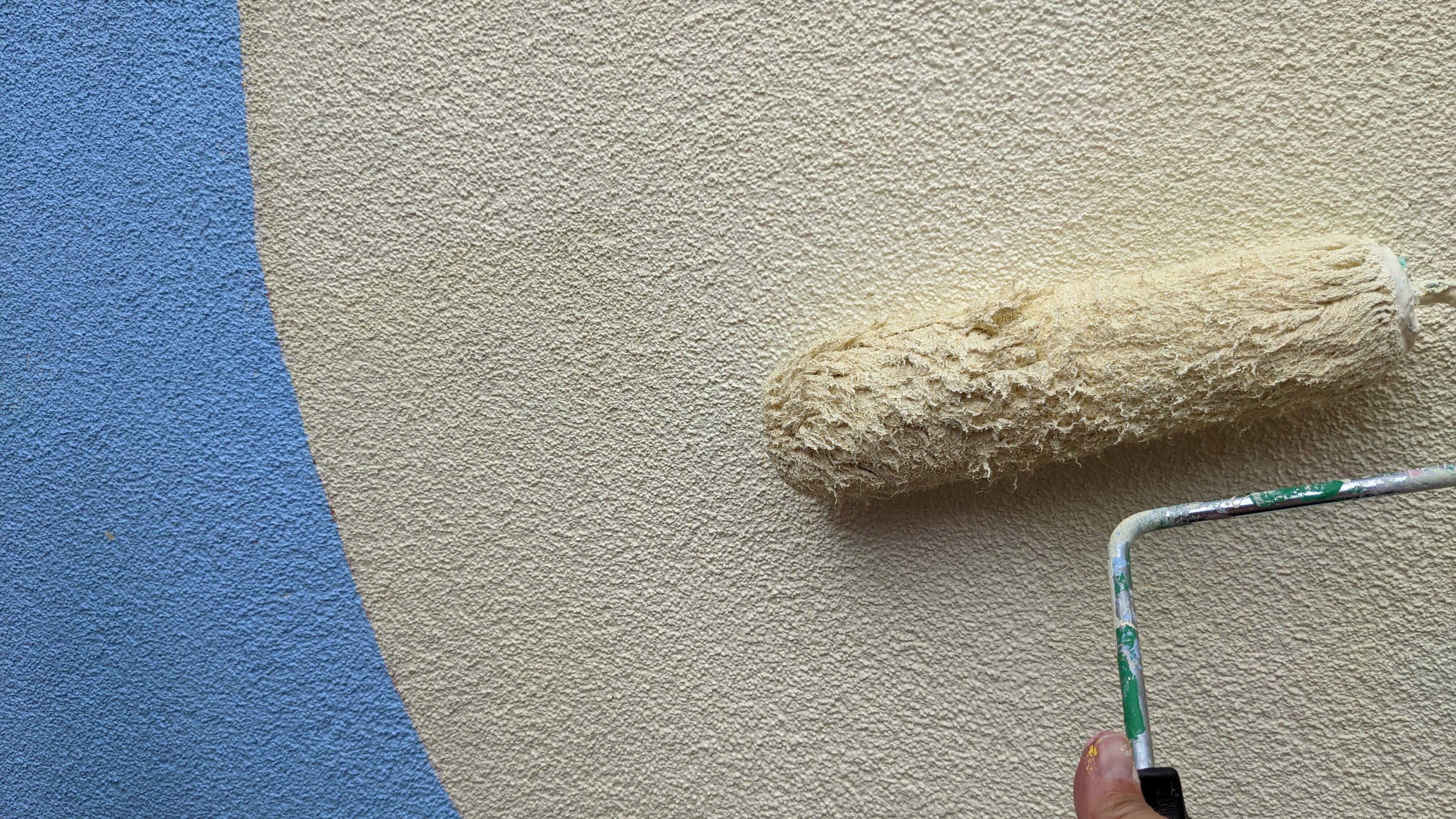 Taking a day to relax at Kits Pool some time later, Otilia found herself daydreaming about what might be happening online. She decided to check in. What she discovered was a message from Drew Young, artist, lead curator and cofounder of the Vancouver Mural Festival (VMF). He’d been following her on Instagram, his message said. He’d been hoping to ask her to work on a mural for VMF, and hadn’t found the right project until now. But the message was a week old.

“By this time I’m pretty sure this guy has moved on,” Otilia recounts. “Like, I’m old news by now. But I gave him a call anyway and I’m a little frantic about it.”

Drew began laughing. He’d been trying to reach her on multiple platforms, he told her, including putting out a call on his personal Instagram account in case any of his followers knew her personally. He’d decided to give her until midnight that very evening to reach out, after which he’d have to find another artist.

Now happily connected with VMF, Otilia got to work. The mural had been commissioned by Low Tide Properties for their building at 828 East Hastings, in Vancouver’s Strathcona neighbourhood. Drew had landed the commission by showing Low Tide a collage of works by Otilia and artists Victoria Sieczka and Lisa Taniguchi.

Once introduced, the trio worked through a number of draft versions of their mural, slowly drawing closer to a final image for approval by Low Tide. The mural was Otilia’s first time collaborating with other artists, but she quickly found herself enjoying being pushed out of her comfort zone. The three artists settled on a shared colour palette, and Otilia began to borrow “structural elements” from Victoria and Lisa’s works to help push her own images into harmony with the broader composition.

“I think that’s a really nice part of doing anything creative is always having that nod to something else, some other element,” Otilia says. “Sometimes it feels like the goal is for artists to always be creating something new, or that’s never been done before. But the reality is we’re always nodding to something else, something that’s been done in the past; we’re just doing so in a contemporary way.” 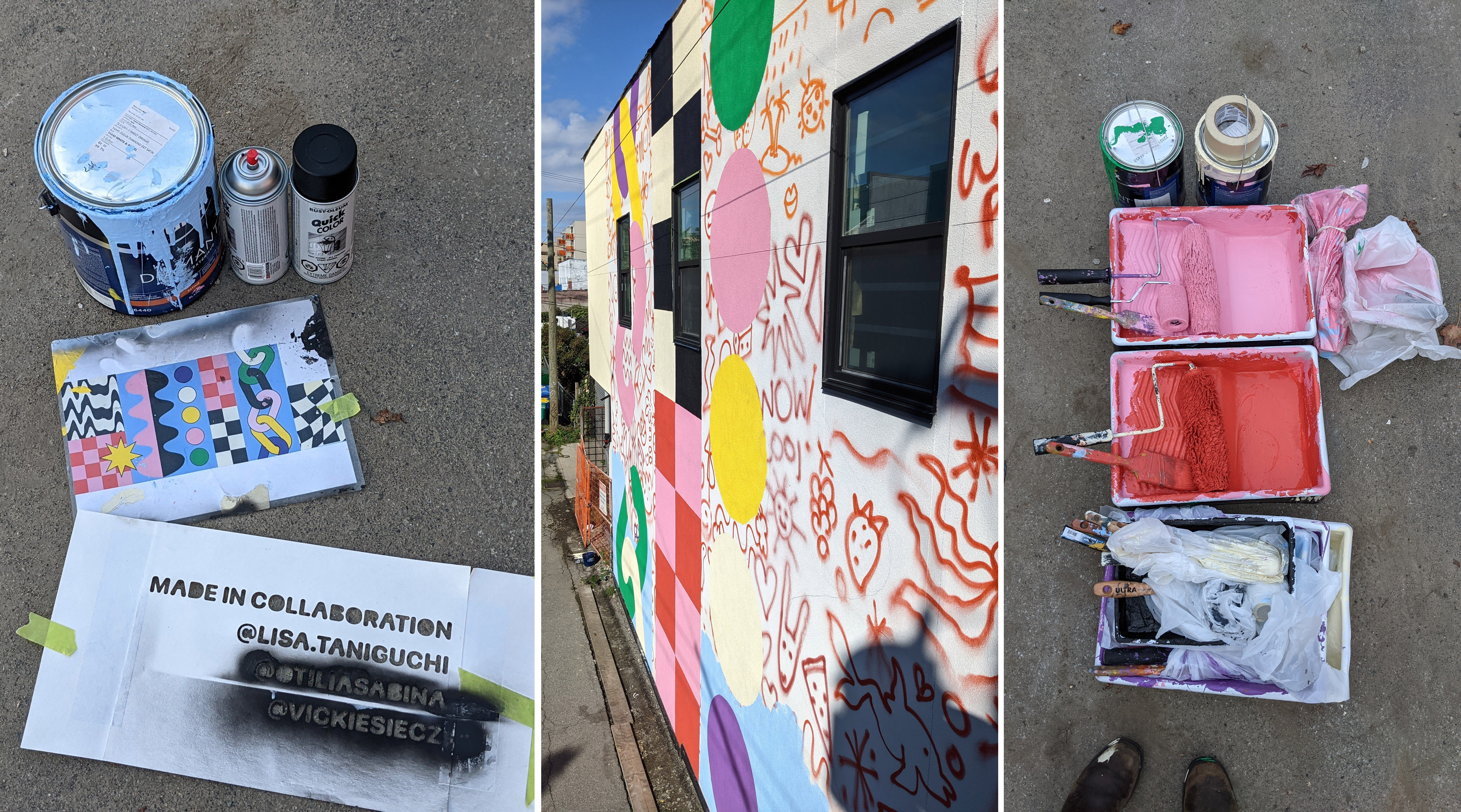 Rain made progress tough at times, Otilia says, as did long days. At first, Otilia was able to take time off to work on the mural full-time. But after a couple of weeks, she returned to work, heading to the mural only after a full day at the university, painting until late in the evening, heading home to shower and sleep and then starting all over. It’s “the closest I’ll get to doing a marathon,” she commented at one point on her Instagram.

She also had to contend with the simple logistics of mural work. Working from a scissor lift, Otilia joked, is like working in a giant robotic arm. Fortunately, her collaborator, Victoria, is a seasoned mural artist, and was able to offer “a lot of good advice and guidance” to get Otilia and Lisa through occasional tough spots. Otilia’s partner was also on hand to help her use a grid system to scale-up her composition to building size.

“That was the biggest shock, I would say; just arriving on site and realizing ‘Oh, this wall that I’ve been looking at that looks 10 inches tall on a screen is actually almost an entire block.’”

Despite delays and a few challenges, the mural was finally finished on Sept. 9. And Otilia says she’d do it again in a heartbeat. 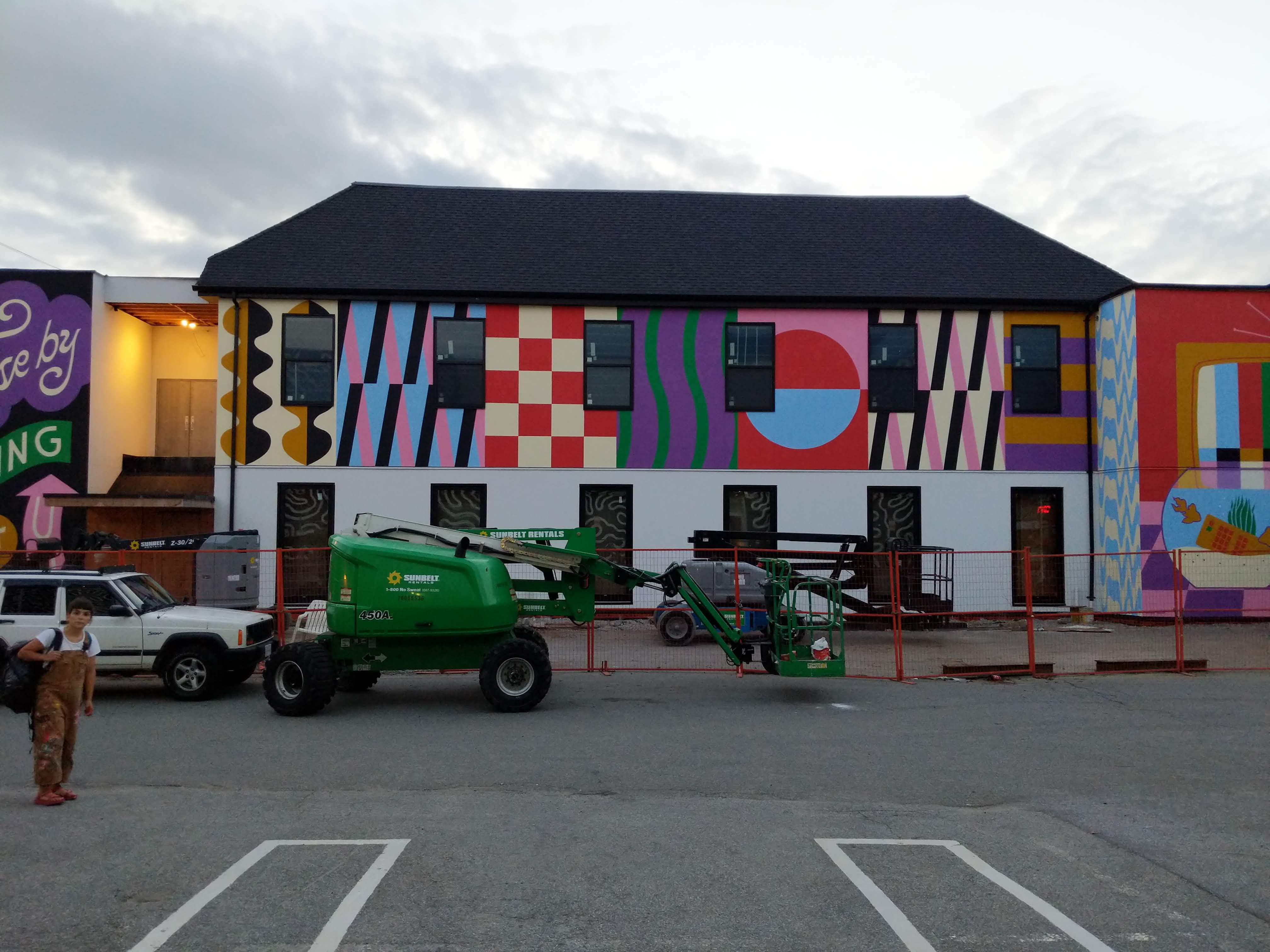 It's a wrap! Otilia stands in front of the finished mural in early September. (Image courtesy Otilia Sabina)

“I think it’s nice to know you can put a lot of yourself into something, that it can be stressful and exhausting, but it has a definite end date,” she says. “I thrive under those kinds of circumstances. I haven’t done well with the pandemic for this exact reason.”

In fact, she notes, the mural itself addresses some of the uncertainty and despair that has characterized 18 months under COVID-19. Titled Rediscovering Joy, Otilia says the painting aims to bring “joy and hopefulness.” to onlookers.

Follow Otilia on Instagram or check out her website to see more of her outstanding work. Visit Vancouver Mural Festival online to learn more about all the artists participating in this year’s events.