A monumental painting by artist and ECU faculty member Russna Kaur (MFA 2019) was recently acquired by the Vancouver Art Gallery for its permanent collection. According to the artist, the painting is a crucial work in her development as a painter.

“I discovered a lot about my practice through creating this work,” Russna says. “It made me realize that painting can become a playful space where I have the freedom to experiment with different approaches to surfaces and materials.”

The 2019 painting, entitled What would YOU do?, is one of the final pieces Russna completed during her MFA studies at ECU. It’s also emblematic of her idiosyncratic approach to materials. A glance at the gallery label would reveal some of the usual suspects, including acrylic and oil paint, were used to make the work. But strips of canvas, sawdust, latex paint, oil stick, and spray paint also make an appearance. 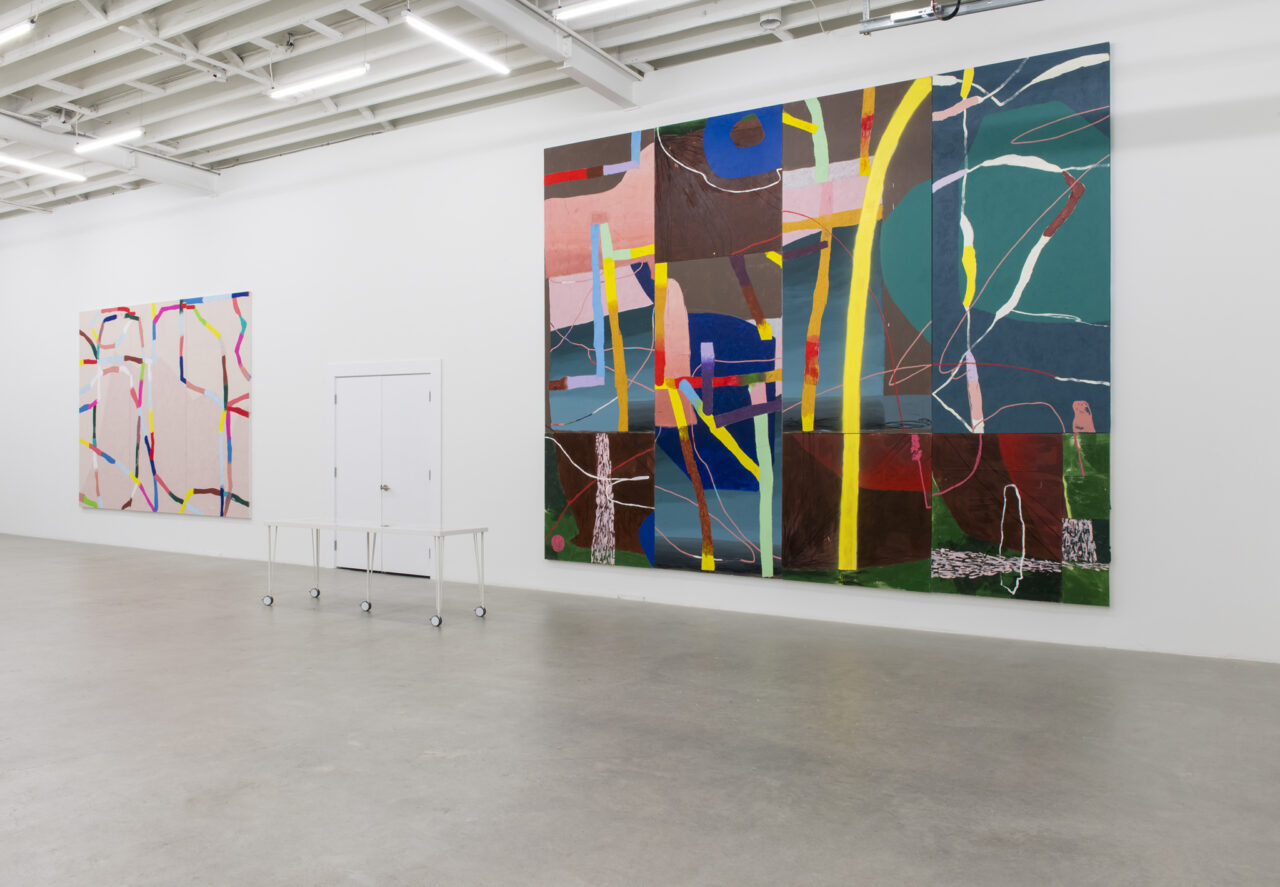 Having resolved as a first-year MFA student to work in larger formats, Russna says creative thinking was required to figure out how to make a painting that was larger than her studio space. She began dividing her compositions among smaller panels, and painting them in sets. This approach allowed her to squeeze her larger works into her tight studio. She could then assemble them elsewhere when she wanted to see them in their entirety. But What would YOU do? was too large for all but a few spaces at ECU.

“It was so big that I used to have to lay the pieces on the second floor of Emily Carr’s sculpture atrium and then run up to the third floor and look down from the window to actually get some distance from it,” she recounts.

While painting on multiple panels was initially a strategy for creating large works in small spaces, Russna quickly realized the approach had unexpected benefits.

“Sometimes, during the painting process, there are moments when I feel like a painting has come to a certain point where, no matter how much more paint I add, it’s not going to do what I want it to do,” she says. “By moving or switching the panels around, it’s almost as if the painting is brought back to life — it opens up again. Sometimes paint, as a material, is not the solution. Sometimes the solution is moving the panels around by physically rearranging the composition.” 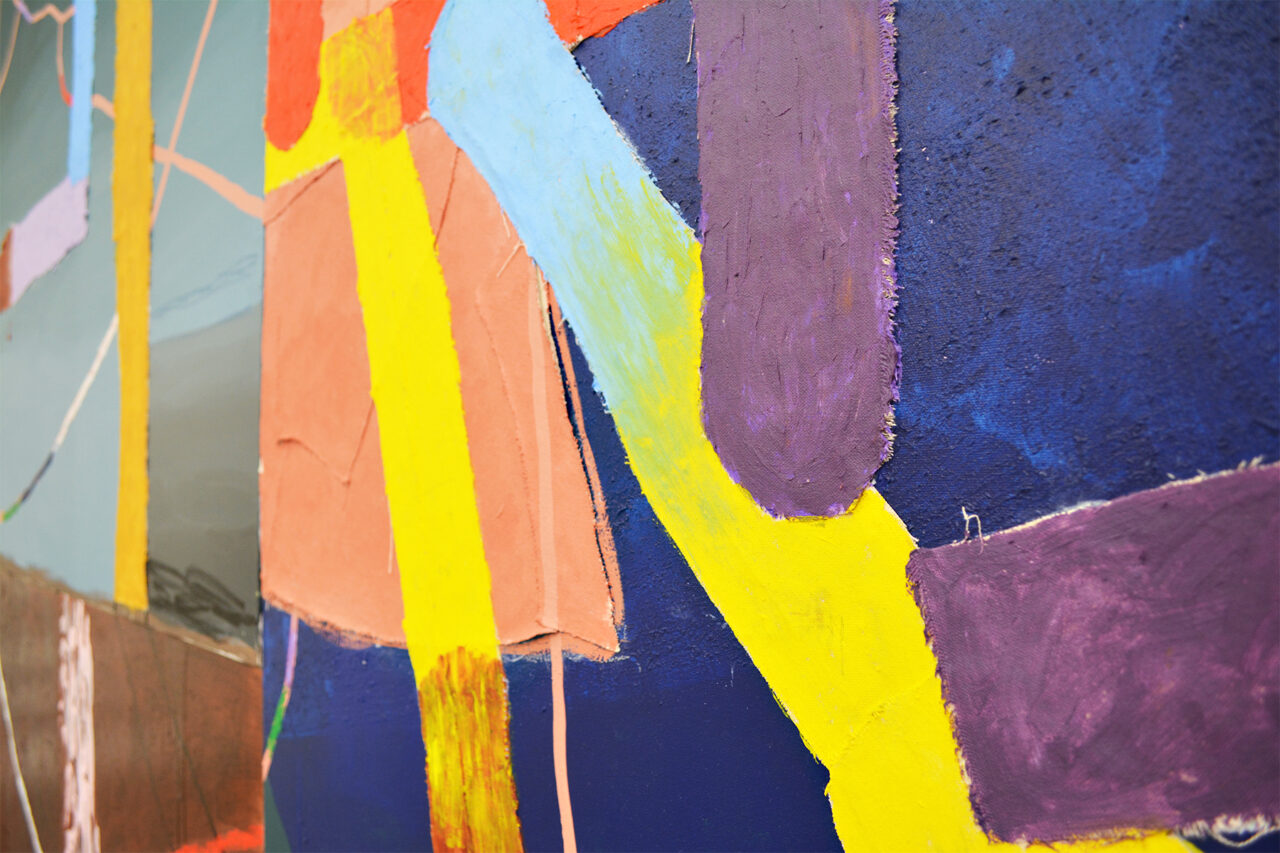 Image courtesy the artist.
Russna Kaur, 'What would YOU do?,' (detail) 2019. Acrylic, oil, latex, pastel, canvas and sawdust on panel.

Russna says she wants her paintings to feel as though they remain capable of change, even once she’s finished working on them. Using multiple panels for single compositions is part of how she encourages this perception of fluidity.

“It’s a little like the way we move through various phases of our lives,” she says. “If I think back, my life experiences up to this point have been anything but straightforward. So, when it comes to my paintings, why should they become these single-surfaced, fixed objects? I like having the option of moving things around, swapping panels out, expanding or shrinking the composition, turning things upside-down; it’s exciting.”

The life experiences to which Russna refers are likewise bound up in What would YOU do?

One of Russna’s favourite books as a child was ‘The Cat in the Hat,’ by Dr. Seuss. The story follows a pair of children whose mother leaves them alone for the day. The children are bored until suddenly the cat in the hat arrives, and takes the kids on a wonderful, chaotic, sometimes destructive romp, far from the eyes of any real authority figure. The children only barely get things cleaned up and back in order before their mother comes home. She asks them, ‘Did you have any fun? Tell me. What did you do?’ But an answer is never given. The narrator then asks the audience, ‘What would YOU do if your mother asked YOU?’

Those storybook children knew very well what they were expected to do, Russna says. But they chose to take a risk and follow the cat. While painting What would YOU do?, Russna says she began to reflect on a similar moment in her life, where she saw two diverging paths. She could continue on the path she had been placed on, which is what she’d been preparing for her whole life. Or, she could take a risk, and pursue a career as an artist. 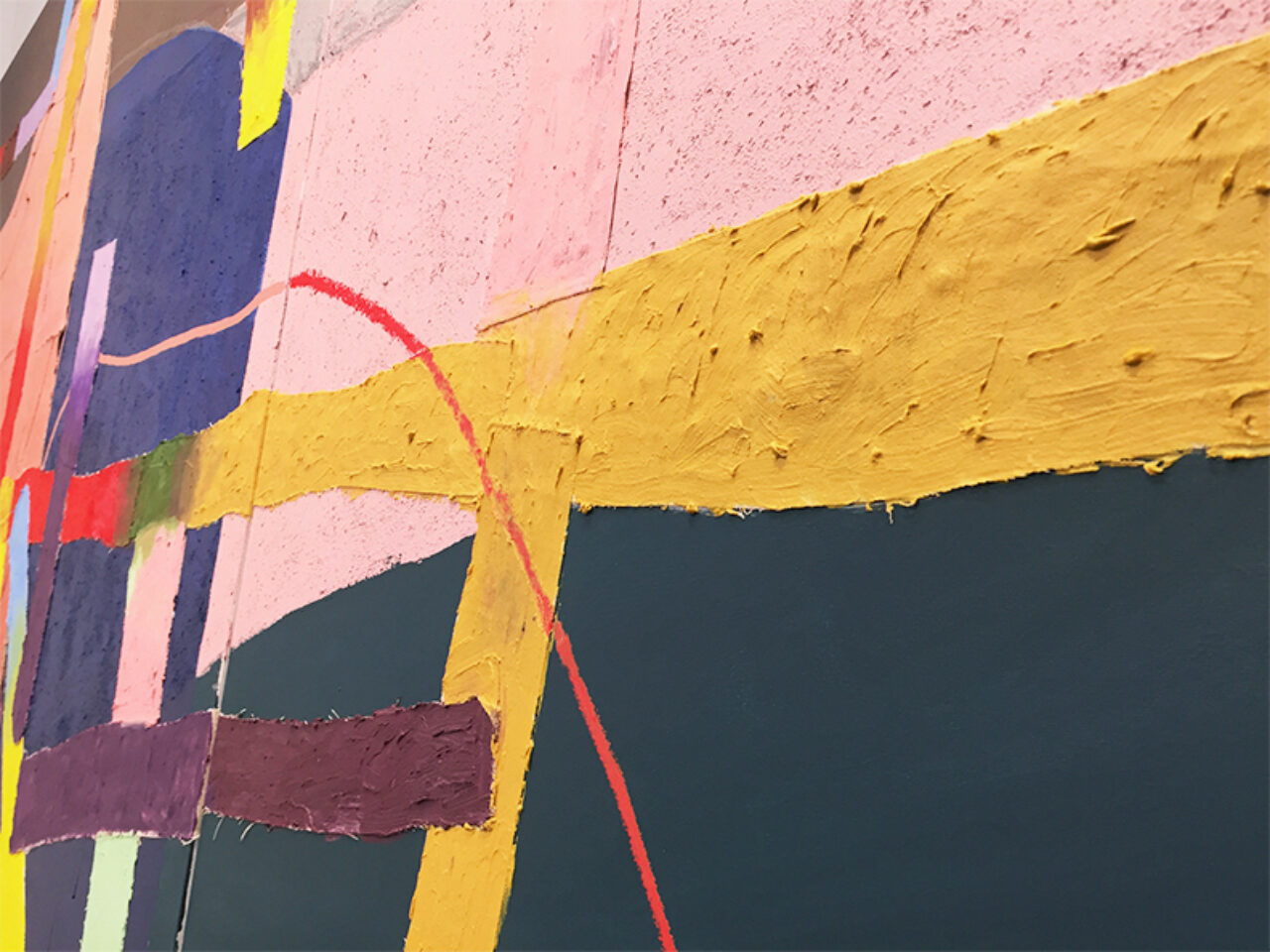 Image courtesy the artist.
Russna Kaur, 'What would YOU do?,' (detail) 2019. Acrylic, oil, latex, pastel, canvas and sawdust on panel.

It’s no spoiler to reveal she chose the latter. But the final weeks of her MFA studies, while she was painting What would YOU do?, were charged with reflections on the “challenges and obstacles” that came with following her passion. So, when it came time to name the work, Dr. Suess immediately sprang to mind.

“The title of the painting plays off of that last question: ‘What would YOU do?’ It reminds me about the decision that I made, when, in a way, I chose a little bit more of the rebellious path. So, for me, it’s a constant reminder of the decision I made that day to take a stance and pursue what I wanted to do, regardless of what I may have been expected to do. It presents that moment of reflection for myself and my work.”

She hopes viewers will also consider the question in the context of their own lives; what would YOU do? How are you currently going through life? Would you rather be doing it another way?