A new Emily Carr University of Art + Design initiative aimed at decolonizing healthcare in the province’s north has received the go-ahead following a generous grant from the Vancouver Foundation.

Led by Emily Carr’s Aboriginal Gathering Place and Health Design Lab, the Decolonizing the Healthcare System through Cultural Connections project will work to improve healthcare practices and systems that have historically marginalized and harmed Indigenous individuals and communities.

These ongoing harms, the grant proposal explains, are due to an inadequate understanding amongst many healthcare practitioners and policymakers of Indigenous worldviews, lived experiences and the impacts of colonial policy on the health of Indigenous people.

In BC, as in Canada more broadly, Indigenous people of all ages experience significantly poorer health outcomes than non-Indigenous people. This discrepancy is linked both to Canada’s colonial past and to barriers including systemic racism which continue to permeate the country’s healthcare system.

Policies that severed ties between many Indigenous people and their cultures, languages, land and communities have generated ongoing, complex and damaging effects on the mental, emotional, spiritual, cultural and physical health of those peoples.

“The healthcare system’s failure to meet the needs of Indigenous people is a critical social issue,” reads the Decolonizing Healthcare proposal.

“Entrenched within its colonial history and present, the system fails to acknowledge culturally specific knowledge and practices including Indigenous perspectives on health which tend to be more holistic.”

“The healthcare system’s failure to meet the needs of Indigenous people is a critical social issue."

“These prejudices can manifest within healthcare settings as: pathologizing of Indigenous worldviews; the perpetuation of harmful stereotypes; and limiting clients’ agency in decision-making about their health. As a result, Indigenous people not only receive substandard care, some individuals avoid accessing care due to negative encounters, thereby creating a negative feedback loop that further marginalizes Indigenous individuals and communities.”

Focusing on engaging with community members in and around Prince George, BC, the project also draws in Marlene Erickson, Director of Aboriginal Education at the College of New Caledonia, as a Community-based Liaison for the project. Through her connections to communities in the Prince George area, Marlene has already been heavily involved in working to document the needs of local individuals, as well as opportunities for the project’s evolution.

Local Indigenous artists, knowledge holders and discussion facilitators will lead the Decolonizing Healthcare workshops and help monitor progress, while local Indigenous community members will be invited to participate in the workshops alongside non-Indigenous healthcare students. 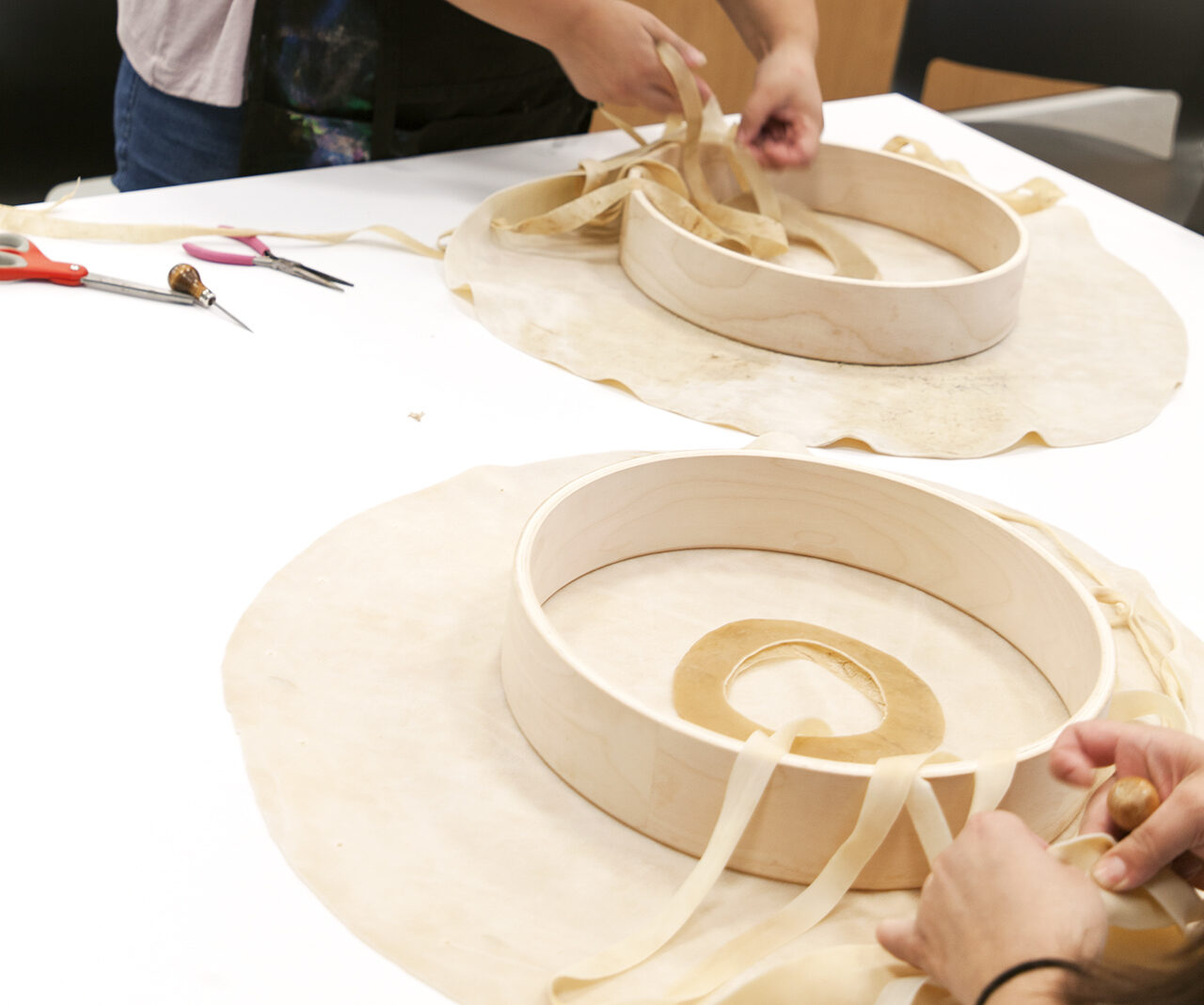 A drum-making workshop at Emily Carr's Aboriginal Gathering Place. Workshops such as these are some of the tools that will be used as part of the 'Decolonizing Healthcare' initiative.

“The overarching goal for the project is to transform Indigenous people’s experiences in the BC healthcare system, such that they no longer experience racism and instead consistently access culturally safe and appropriate care, feel comfortable using BC’s healthcare system as part of their health management, and experience better health outcomes,” the proposal says.

“The key to reaching this goal is to dismantle and reconstruct health professionals’ perspectives on Indigenous health.”

By testing their model among community Aboriginal support services, community members and healthcare students, the team aims to address the issue at a key learning phase. Their hope is that the participants’ learnings will translate into a steadily increasing prevalence of culturally safe approaches in the field.

Andrew Siu, Strategic Advisor of Research + Partnerships with Emily Carr’s Health Design Lab, recently returned from Prince George on a trip to meet with stakeholders and begin early-stages planning for the project.

The Vancouver Foundation grant, he said, will allow the Decolonizing Healthcare team to push beyond typical, colonial responses to systemic gaps in healthcare, such as the ones facing Indigenous people in BC.

“We're looking at the root causes, which are issues around systemic racism and challenging people's biases in the health system,” he said.

“We want to help healthcare professionals understand that while they may not even realize it, they are operating in a colonial system and working under colonial assumptions that not only don’t appeal to Indigenous communities, but have very often actively worked against the needs and health of those communities.”

The project is expected to progress over the next three years, with the of an exhibition in year three, consisting of items curated during the workshops alongside words and insights from participants.

Monitoring and evaluation throughout the entire process will also provide an evolving model for best practices, and help inform what will eventually become a replicable framework for similar initiatives in other jurisdictions. Ideally, insights will be shared with the First Nations Health Authority and Provincial Health Services Authority as the program reaches its third year.