Walking in to The Show for his graduating class, recent alum Michael Edward Miller’s (BFA, 2019) work stood out. The two monochrome paintings took up an entire wall. The presence of the work was both loud and quiet with the ability to trick your eyes into believing the paintings were flickering like the static they were inspired by. We sat down with Michael after The Show wrapped to talk about his work, process, and his award.

“Before I came to Emily Carr University, I had a painting practice that was based off of working with appropriated digital imagery,” said Michael. “I was playing with scale which was how I first developed my spray paint technique combined with laser cut Mylar stencils.” Although he had a painting practice when entering ECU, Michael explored everything but. “I dove into sculpture, ceramics, installation, coding, sound,” lists Michael. “I did anything that wasn’t painting because I saw this as an opportunity to challenge myself.” 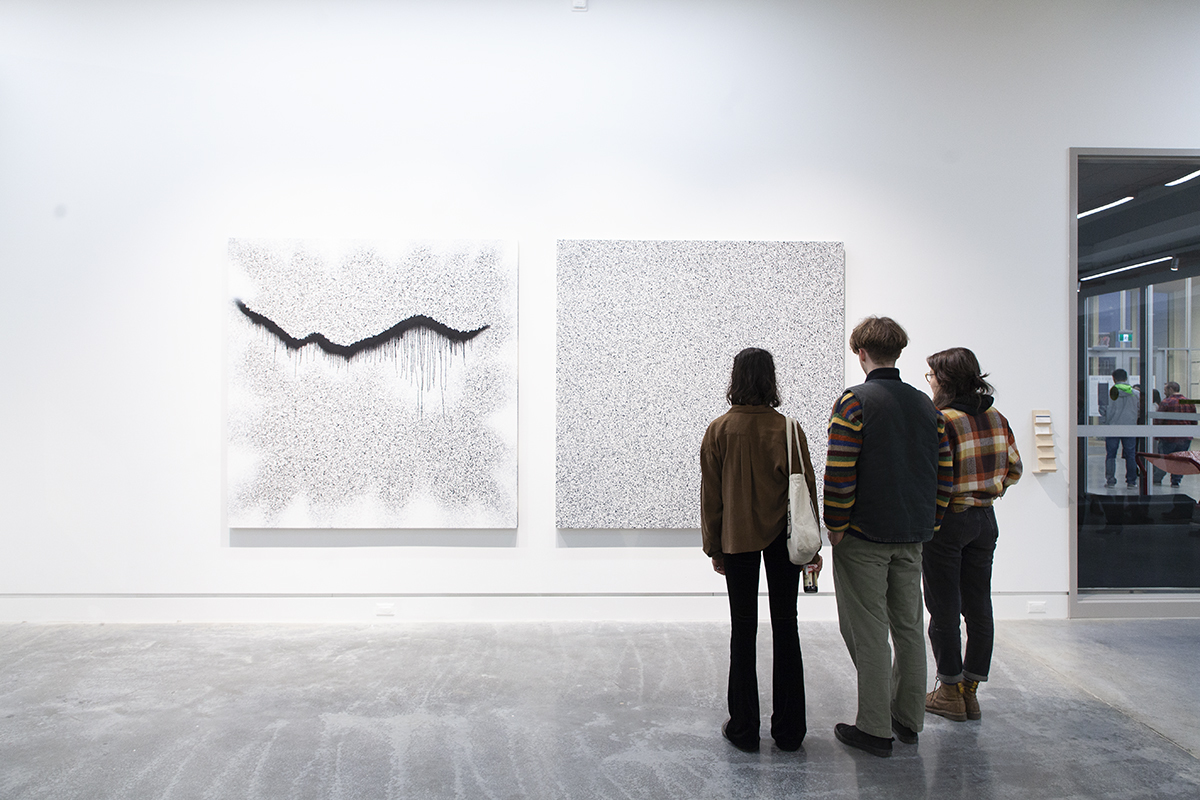 At the end of his third year, Michael revisited painting. Taking skills developed from other mediums, his paintings in The Show are a culmination of a year of research alongside trial and error that his diptych I’ve lost control again embodies. There is a reason that work has such a commanding presence just from the presentation of technical skill alone.

I’ve lost control again is referencing both videogames as much as Michael’s own life as well. “When a game is disconnected from its source, you are left with static. For me, that connection to videogames was repetitive and referenced my childhood,” said Michael. “My practice is also influenced by the digital generation as the internet became mainstream while I was growing up.”

This influence is reflected in the process of making I’ve lost control again as much as it is with the end result. The pixelation and stenciling is something Michael has been working on since his first exhibition in 2012. “This type of very intricate stenciling, now at the point where I’m finally working with small, pixelated shapes began then,” said Michael. “In working with digital imagery, I was also cutting out paper stencils by hand. Eventually that shifted to acetate and then laser cutting on Mylar. As I got into more intricate work with delicate shapes and text, I began to work with vinyl stencils.” 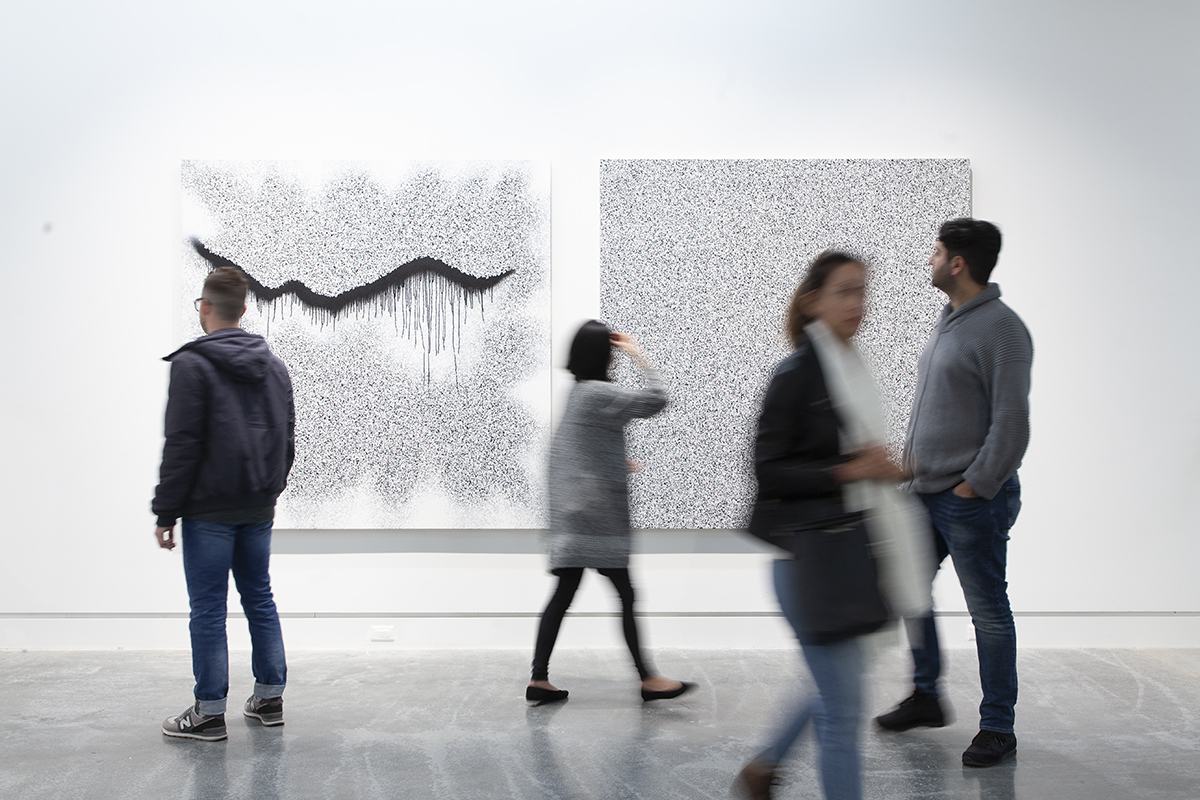 After working with a stencil company for two years to troubleshoot the process of creating large and far more complex stencils, Michael finally had a process down. The static pattern was painstakingly weeded with a needle due to the intricacies of the piece. “Creating one of these works takes longer than producing an entire solo exhibition,” laughed Michael. “It’s comical in some ways that the actual painting part takes an evening at most, but the weeding – and sometimes cutting, when the machine misses a spot – of these pixels takes the bulk of the time even if the end result is just gesso and spray paint.”

Michael is unsure if he could physically create another piece. “After I finished picking out the vinyl for each painting, I couldn’t feel the tips of my fingers for another month,” said Michael. “I had a studio assistant at one point while I was working on the prototypes, but after that laborious and painful experience, they did not want to do more and I don’t blame them. I spent the entire year leading up to the grad show weeding these two pieces for I’ve lost control again.”

The end result of this process impressed viewers with one of the outcomes of The Show being Michael’s work getting selected for one of the Nudelman Collection Awards. In terms of the impact an award can have on a new graduate, Michael shares that it helped offset the exorbitant cost of producing his grad show work. “It greatly helped me,” said Michael. “To be able to move on and consider new work right away is something every grad would want.”

We’re excited to see what Michael does next as he moves into his professional career as an artist. You can see more of Michael’s work on his portfolio.

Drawing on a range of sources from digital media to everyday and popular culture, Vancouver-based artist Michael Edward Miller’s work is concerned with exploring and critiquing the ways in which postmodern technologies impact and shape new kinds of human subjects and inform aesthetics.

Each year, a number of awards provided through the generosity of donors will be provided to students participating in The Show. Award winners are selected by their works, their GPA, or a combination of the two. A complete list of recipients for the 2019 student awards is available here.

“I’ve lost control again” is about navigating the loss of identity, the dichotomy and inseparability of chaos and control, and the human experience of surviving trauma. Static, or “white noise”, is the randomly generated pixel pattern that appears when analog television sets are disconnected from their transmission source. The intricately painted static pattern serves as a visual metaphor of the internal experience of becoming disconnected from one’s body, identity and the breakdown of physical functionality. The material process of this work speaks to chaos and control through the way the precise stenciling method controls the chaotic properties of the spray paint.