“The intention is for you to really struggle; to find what it is you really want to do,” says designer and ECU faculty member Sophie Gaur. “This finding of your personhood in design is essential for you to be a contemporary designer.”

This theme is one Sophie will return to many times during our conversation. Resilience, she tells me, is the foundation on which a vital design practice is built. But resilience, of course, is a human quality, rather than a professional attribute. It is intimately linked with agency, with empowerment, and with a process of earnest self-searching.

Sophie’s point echoes recent remarks from her ECU colleagues including artist Patryk Stasieczek, designer Eugenie Cheon and visiting workshop leader and designer Ramon Tejada, each of whom emphasizes the importance of agency and diverse ways of knowing in creative practice.

Themes of resilience and personhood are not out of place as BC slouches toward the one-year anniversary of the day lockdown began. They are likewise in keeping with Sophie’s recent personal history, which found her emigrating from Australia for a teaching position at Emily Carr shortly before the pandemic hit. (Since 2005, Sophie had been teaching Industrial Design at RMIT University, in Melbourne. Previously, she had run an independent design studio out of New Delhi in her home country of India).

And although health restrictions saw Sophie — as with instructors nation-wide — teaching remotely, her third-year Fall 2020 Industrial Design class engaged with a subject as old as the world.

'Making Body: Tools to teach and learn about bodies,' by Aradhya Rattan. Crocheted dolls for use in helping open conversations with young people around the subjects of different anatomies in an inviting and de-stigmatized way.
Image courtesy the designer.

Drawing on a maternal health project she’d begun while in Australia, which worked with rural women in India, Sophie had the class look at ‘Maternal Health, Medicalization and Women's Narratives.’ More specifically, she had the class focus on the subject of pregnancy.

Each stage of a pregnancy event has its own complicated relationship to medicine, to society, to culture and to biology, she notes. Despite being as commonplace as experiences get, pregnancy and birth are very often misunderstood.

“So, how do you take this very natural body event and make meaning of it?” she asks. “How do you transcend a lot of the attitudinal frameworks — which are very often either medical or social — that are imposed on it?”

Sophie’s preferred starting point for any class is to provide a very open prompt. Perhaps she’ll tell a class they’ll be designing for problems associated with “sound,” or “biophilia” (the human urge to seek connection with other forms of life). “Pregnancy,” as a subject, likewise contains a spectrum of complex issues students can hone in on and design for.

Image courtesy the designer.
'Third suit,' by Julia De la Puente Calvo. The third iteration in a set of three suits. A material exploration of ideas of motherhood and body agency.

“We began the exercise firstly through an introduction into ‘systems thinking,’” Sophie recounts. Systems thinking is a strategy for understanding how elements of a system are interrelated, and how they influence one another.

With in-person studio time limited because of the pandemic, Sophie encouraged students to work with textiles. Textiles can be produced in a variety of ways that don’t rely on machines, such as crocheting, knitting and knotting, she notes. Historically, textiles are also linked to concepts associated with pregnancy and womanhood.

“It is a woman’s material, traditionally, because it has existed independently in both its artisanal as well as its manufacturing frameworks; textiles continue to be made by hand, and even though they’re also made by machinery, that mechanization has never excluded women to the extent that the mechanization of wood or metal has,” she says.

“I emphasize textiles also because so much of pregnancy and childbirth is associated with sewing, and with the making of clothing and nappies and things like that. It is a material agency that is really ancient, and that continues today.” 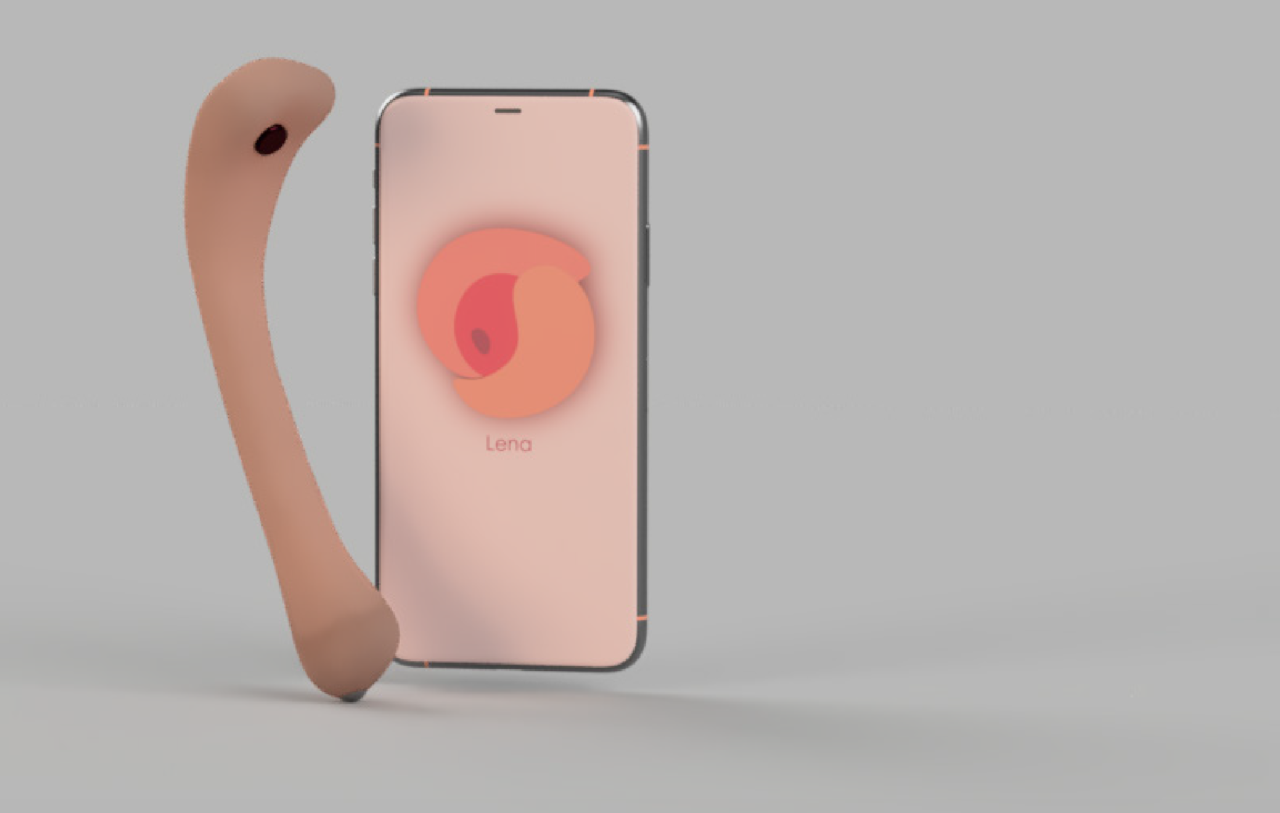 Image courtesy the designer.
'Lena: Cervical Speculum and App,' by Shelby E Sixsmith. A tool for education, self-examination and remote connection with medical services. Lena can be used to share medical information and conduct remote visits with your medical professional.

The Self in the World in Time

Students were first tasked with creating a “persona.” The personal history of this fictional individual would provide students with a social, cultural and biological lens through which to view pregnancy.

“What was really beautiful to see was the range of different personas that were created by the groups,” Sophie says. “They were very diverse. Each group had this totally different way of looking at it.”

Meanwhile, Sophie brought in Saraswathi Vedam, associate professor of midwifery and lead investigator with the Birth Place Lab at the University of British Columbia. Saraswathi introduced the class to the ways in which factors including gender, social and cultural norms, and medical representation influence how we understand pregnancy and birth.

Armed with a nuanced understanding of the processes surrounding pregnancy and birth, students were next tasked with understanding the site — the body. They did so by developing a series of representative models.

“Somebody crocheted a whole placenta. Somebody made a whole zippered uterus. They were these really beautiful ways in which they started understanding,” Sophie says.

“Through this exploration, through these different kinds of projects, that’s when you now start looking at the body as a site, and you start asking, ‘What are the ways in which this intimate connection happens between the self and things external to it — which designers are interested in — through this process of pregnancy?’”

Image courtesy the designer.
'Lumpy: Empathy doll,' by Kenneth Boediman. A birthing soft-toy to help open up conversations around pregnancy and childbirth with young children in growing families.

Seven weeks into the course, students now had a “material outcome” from their study of the pregnant body. At that point, says Sophie, students were given free rein to propose a final project.

In other words, students were not given a “design brief” — a document traditionally created at the beginning of a design job that informs a designer’s entire process from the outset. Rather, they were asked to identify a pathway into designing for pregnancy that resonated with them personally.

Many students were accustomed to more direction, Sophie notes. But the process of grappling with a complex subject is key to establishing personhood in the design process.

“Students need to find who they are, because design is no longer a service industry where, ‘We’ve made you into really good product designers, now go forth and design that toaster!’” she says. “What you want is designers now who say, ‘You don’t even need bread.’”

Designers need to question the value of any ubiquitous product, she says. In doing so, they address problems that are embedded both within that object, and within the larger systems it occupies.

Students met this challenge head-on, Sophie notes. And the spectrum of projects students ultimately delivered, she adds, was stunning.

They included a cervical health device for self-examination, which transmits data via an app to a remote doctor; a doll with reproductive organs to assist in conversations between parents and small children about the birth of a new baby; furniture to encourage bonding between couples during pregnancy; and a tapestry celebrating black doulas, who in turn empower women of colour to find their own birthing agency within the North American medical and birth systems.

Proud as Sophie is of the work her students turned in, she’s equally proud of the way they rose to the occasion. They were given a difficult challenge, she says; they were asked to approach a complex subject by looking into themselves for inspiration. And they met that challenge head on.

“They’re so chuffed by what they have done, and, I think, that is the point where you have made the shift as a student,” she says. “Not as a designer, but as a person; you’ve understood how to be a designer, rather than how to do design.”

Specifically, that skill involves becoming accustomed to conflict, to uncertainty, and to not-knowing. Once a person is comfortable with those experiences, they realize conflict or uncertainty are not personal failings. Rather, they are “triggers for a deeper engagement with the complexity of wicked problems,” she says.

“Ambiguity is an intellectual offering. To be able to work through ambiguity is your design superpower.”