The team chose the name Ctrl+Z because it’s “one of our most frequently used keyboard shortcuts,” Jessica tells me. The two keys allow for any action or edit to be undone — a “bit of a lifesaver as a student and I’m sure as a professional as well.”

In response to the Protothon’s “mental wellness” theme, revealed at the beginning of the 24-hour period, Ctrl+Z’s app, called Together, was conceived only after an intensive interview and research process in the early hours of the hackathon.

“Through all of that research, we came up with a buddy system — which is the foundation of our app — which is the idea that people who are struggling with mental health, or who may be undiagnosed, could get connected to people they trust for support,” Stefanie tells me via group video chat in September. “The app offers people a way to open up to their support network, and to keep track of each other’s mental health progress.”

Empathy maps from the creation of Ctrl+Z's 'Together' wellness app. (Image courtesy Ctrl+Z)

With their focus established, the team set out to create the app itself. Fortunately, every member of Ctrl+Z naturally found a role to play in the process.

“We just got on together from the very beginning,” Sundeep tells me, while teammate Jessica adds, “Everyone’s strengths balanced out, so it ended up being a bit of a dream team.”

Stefanie focused on facilitation, ensuring assets, tools and ideas were organized and accessible to everyone. Sundeep took an analytical approach, digging deep during the research process and contributing content. Jessica likewise dove into the research process, and worked on steps related to UX, which included helping to design the final presentation. And Tiffany, who was the only Ctrl+Z team member with previous hackathon experience, is “the most rapid prototyper I’ve ever seen,” according to Jessica, which ensured product design steps including wireframes were completed in the blink of an eye.

There was very little sleep during the hackathon, the team reports. But because none of their roles on the Together project were predetermined, each of them views the experience as one that has helped them define their passions.

“With the learning we do in class, there’s a lot of theoretical work and fine-tuning specific things,” Tiffany tells me. “But doing a hackathon brings all of it together. You get to go through the whole design process in a really quick amount of time. It’s a really great case study; it encompasses everything you learn in class and puts it all into a single project.” 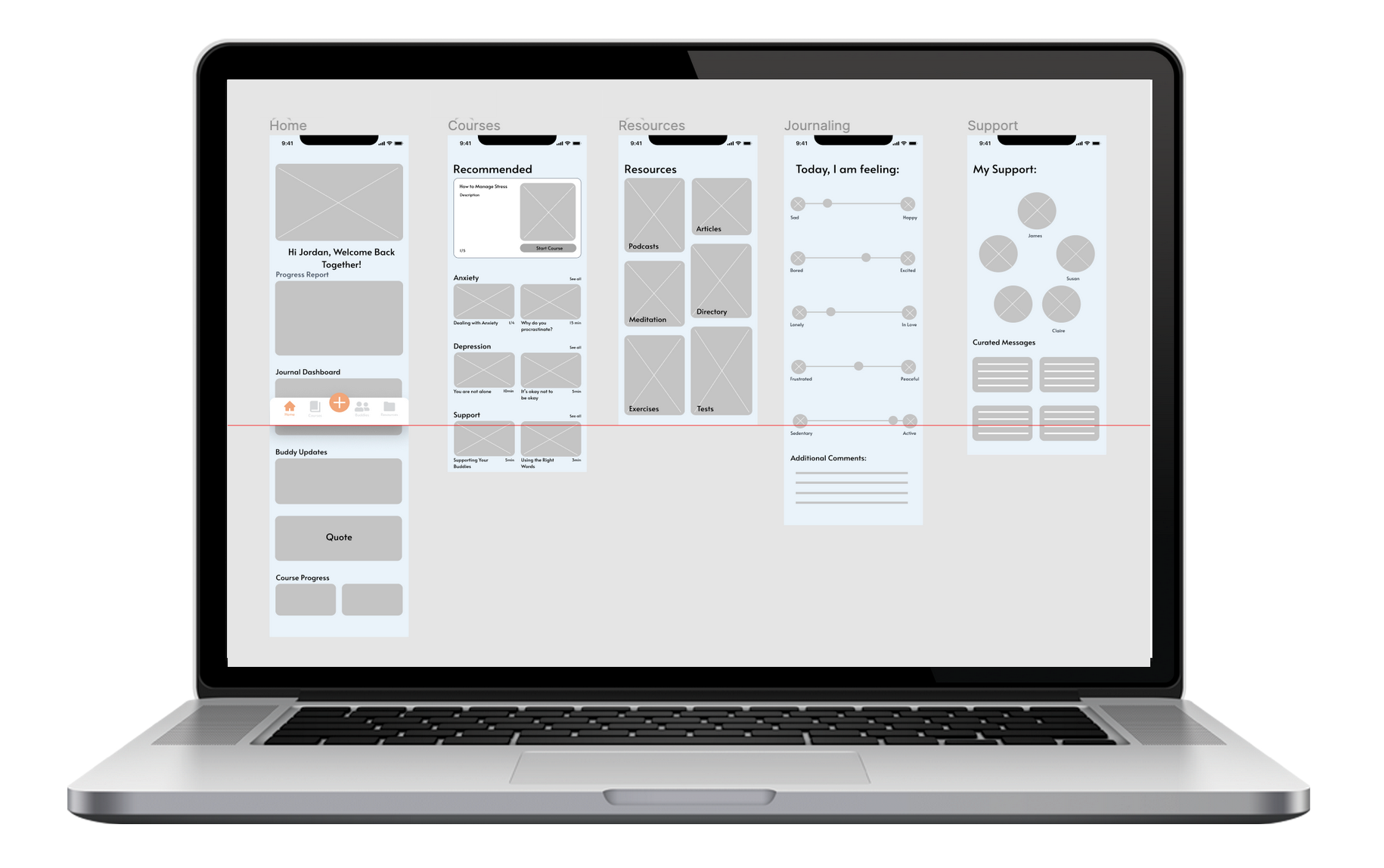 An example of wireframing from the creation of Ctrl+Z's 'Together' wellness app. (Image courtesy Ctrl+Z)

Looking through the Together presentation, I can see what Tiffany means. Ctrl+Z addressed every step of the design process during their 24-hour marathon, including developing empathy boards, user personas, problem statements and design solutions, wireframing and UX design, much of which is invisible to the end user and yet is absolutely vital to the creation of a successful, user-friendly app.

Tiffany’s teammates note the experience was an eye-opener for them. Sundeep says the hackathon satisfied one of his fundamental motivations — the experience of seeing ideas applied in real-world contexts.

“That’s what I wanted out of this Protothon: to see how we can develop new ideas for a client, and how those ideas can actually go out into the real world to make a real-life impact,” he says. “That’s the reason why I chose this profession. So, if I’m able to achieve even a little bit of that in 24 hours, that’s a big thing for me.”

For Stefanie, the value of working as part of a team was irreplaceable.

“I think teamwork skills are something a lot of design teams look for when they’re hiring people,” she says. “So, I think this is a really good experience to have, and a really good skill to polish.” 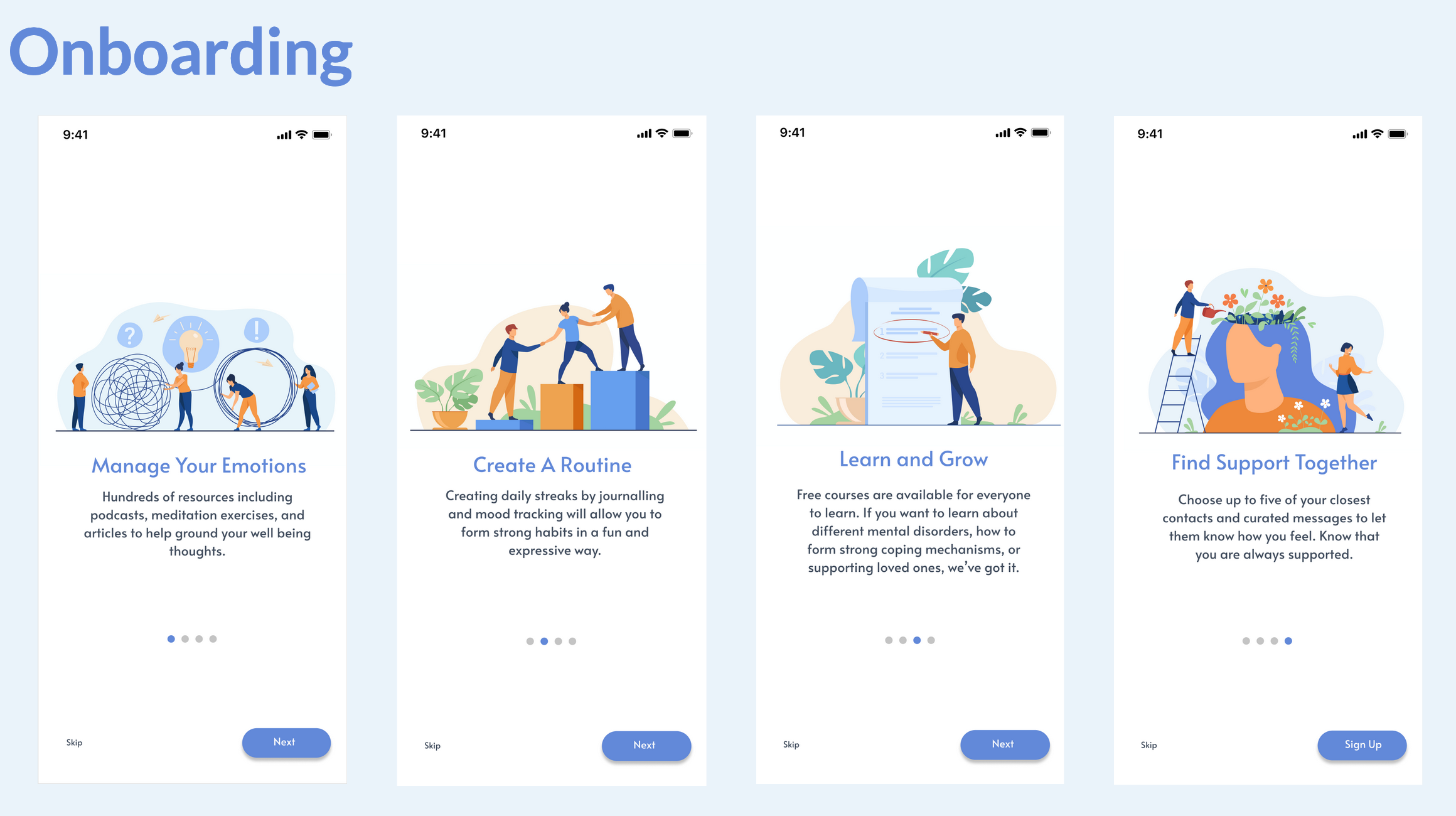 Examples of the onboarding interface Ctrl+Z created for their 'Together' wellness app. (Image courtesy Ctrl+Z)

For Jessica, the VXP Protothon represented a chance not only to get to know other people in the design community, but to gain a better understanding of herself as a designer.

“Diving into a design process in that short of timeframe, you get to see where you’re at and what your niche is,” she says. “It shows you what you’re passionate about and where you shine. It gives you some direction for where you want to go outside of this program.”

For their hard work, the team took home a $250 prize. They also discovered other designers had been paying attention; congratulations and introductions came via LinkedIn and other platforms, Jessica reports.

And despite the toll a sleepless 24 hours takes on their energy reserves, each of the team members say they will likely participate in another hackathon down the road.

Find a prototype of the Together app now, online, and watch a video of the Ctrl+Z team discussing their UX steps via YouTube. Visit Continuing Studies online to learn more about ECU’s full- and part-time certificate programs in user experience (UX) design and communication design. Find out more about VXP Protothon design-focused hackathon now, at vxpdesign.ca.