They had one computer between the two of them. There was a pandemic after all; spending time at the office, with all its high-end equipment, wasn’t an option. And portable gear was scarce. Especially the kind powerful enough to run the programs used to create VR animation.

But the arrangement was to their liking. By request, in fact. They preferred working at opposite hours, anyhow. Even if it was from their shared apartment.

Chelsea was diurnal. She worked during the day, to the same rhythms as the world outside her window. But Vivian was some other kind of creature. “A night hawk,” says ECU Research Technician Sean Arden.

Vivian typically submitted her files each day between 2 a.m. and 5 a.m. Those submissions were brimming with fresh artwork. So much so, in fact, that it became something of a joke around the virtual office. How long could a person really sustain that level of creative output? As long as necessary, it turns out, and to the tune of dozens of individual 3D characters who now inhabit the virtual world of Chinatown XR.

Chinatown XR was originally conceived as a 360 video project, according to Sean Ronan, cofounder of digital media studio Hammer & Tong. Participants would be able to travel through a 3D-modelled cityscape, entering buildings in Vancouver’s historic Chinatown neighbourhood to experience immersive videos depicting what life was like in past decades.

“The project was born out of an understanding of the limitations of conventional tellings of history in Canada and BC,” Sean Ronan says. “And it’s born out of thinking about how Canada’s history is often framed as one of European settlers. But there’s this whole other way of understanding it, which is through Pacific immigration, coming from China, Japan, South Asia. Thinking about how that story gets overlooked a lot birthed our interest in exploring Chinatown as a subject.”

From the beginning, ECU Master of Design student Binoodha Kunnath had been working on the project as an experience designer — a “key part of the design team” according to Sean Ronan. Binoodha was contributing to ideation and conceptualization; running prototype user-testing and data analysis; performing historical, user, and market research; and developing UI assets and social engagement strategy.

“Then COVID reared its head and very much wrecked any likelihood we’d be able to do any [360] filming,” Sean Ronan says. “We were forced to consider other options, like: what if we took on an animated workflow?”

“It’s no secret how awesome Edward is,” Sean Arden says, noting Edward was hired by Hammer & Tong as Chinatown XR’s art director. “And this project is so unique because we’re using a workflow developed by Edward in the Basically Good Media Lab. So, a system we developed with Edward in the BGML was suddenly being put to work directly in a real world production. It was a big deal.”

Edward’s workflow involves the artist actually entering virtual reality. There, they draw and paint in three dimensions from inside virtual space. (Typically, finished two-dimensional drawings are layered onto three-dimensional forms). The technique was pioneered during production on Edward’s groundbreaking VR graphic novel Dami and Falian.

Vivian Chan, an illustration student at Emily Carr, struck up a friendship with Edward over late nights spent animating on campus. She’d been introduced to Edward’s unique approach while collaborating on projects at school, so they spoke the same artistic language. At Edward’s suggestion, she was hired on as lead character designer once it became clear Chinatown XR would need extra hands.

“Very quickly we found ourselves with an art department made up of six, seven, eight people, which was wild,” Sean Ronan says.

Vivian’s task was to fill the virtual cityscape with characters from different historical eras: the 1940s, the 1960s and the 2010s. She very quickly created all the primary characters, and began to work on “bystanders,” who would exist in the background to generate hustle and bustle in the digital neighbourhood.

But working remotely and mostly through the night, Vivian says she tended to lose track of how much work she’d actually submitted.

“I didn’t know where the line was with bystanders and background characters, so I’d continuously make them,” she says. “And no one really told me to stop. I just kept going on and on. When I eventually told my coworkers what I’d done, they said, ‘Wait, how many characters did you do?’”

The answer, according to Sean Ronan, is possibly as high as 150. Sean Arden notes the team had systems for keeping track of their progress while working remotely. But after setting up a “character generator” to streamline the creation of individual bystanders, Vivian put her foot on the gas and happily ignored the need to watch where she was headed.

That uncontainable energy, Sean Ronan says, is a great example of why his studio loves working with students.

“Students have a ton of ability and insight, and haven’t yet learned ‘what’s not possible,’” Sean Ronan says. “We really like to let people run wild with what they’re good at, and Vivian exemplifies that. She found the space where she felt like she could do her thing, and she just ran with it. It got to the point where I started taking it for granted that every three or four days there would be a whack of new characters coming in from Vivian.”

Meanwhile, the inspiration for Vivian’s many characters reportedly came not only from historical reference materials, but from her own experience.

“I researched quite a bit, and also, since I’m Chinese, I had some ‘growing up’ experience,” she chuckles. “So, with the grandpa wearing socks and sandals, for example, I just thought, ‘I’m so sure my grandpa would do that.’”

Sean Arden proudly notes that Vivian may be underplaying the magnitude of her achievement.

“The ingenuity of Vivian’s character building system is really impressive,” he says. “Her characters were modelled in virtual reality [rather than modelled in 3D on a computer], which enabled her to move really fast. The fact she did it in a professional context is a major contribution to the technique Edward developed at the school. It points to the future of how filmmakers and animators can move quickly using VR tools.” 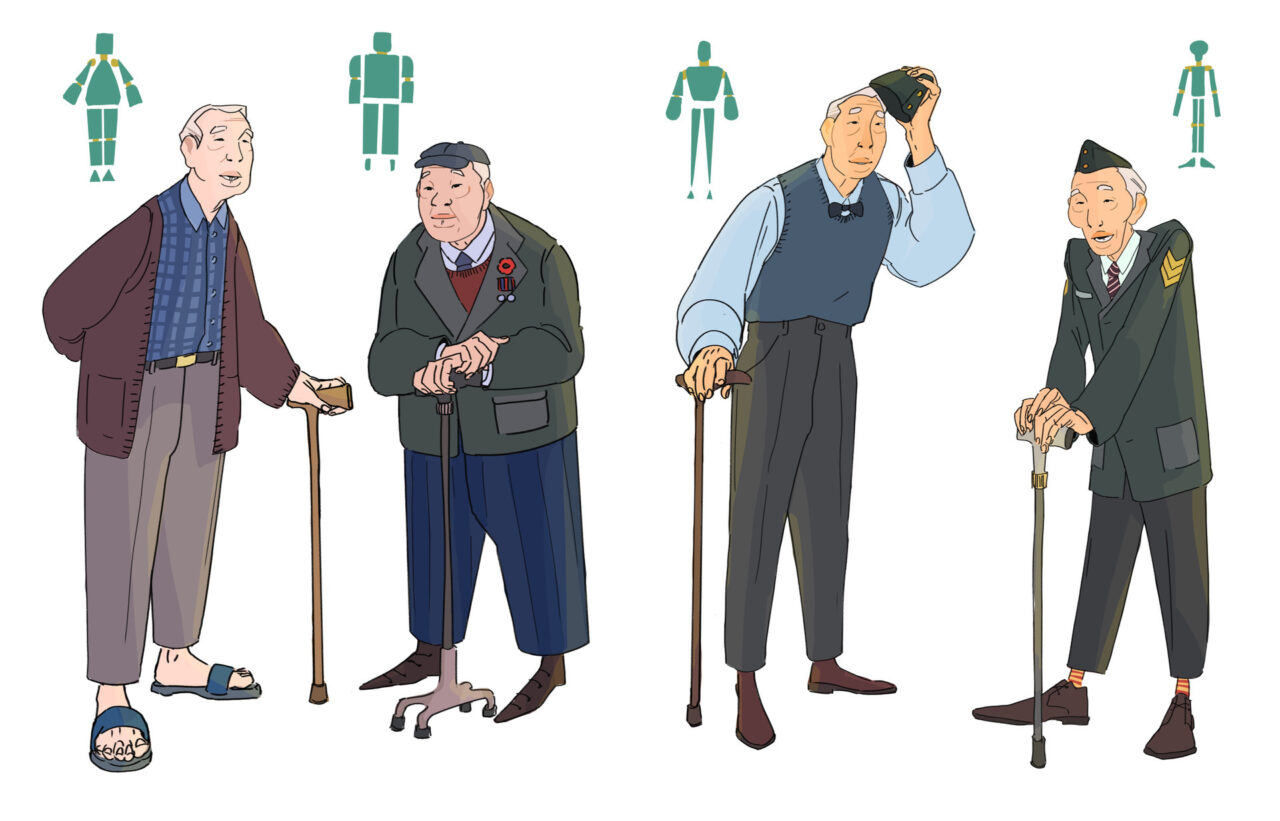 Artwork by Vivian Chan / courtesy Vivian Chan.
A look at the basic body-shapes behind some of Vivian's characters (just one of the many techniques she employed to streamline production of the dozens of characters she created for Chinatown XR).

“Working for the studio was one of my first actual work experiences, and it taught me a lot, because one of my biggest struggles has been that I spend too much time on particular sections of a job,” she says. “I had to throw that tendency out the window and focus on being as fast as possible, but also as clean as possible, so everyone understood what I was trying to convey. It was a really good learning experience.”

Aside from providing a paid opportunity for ECU students, Sean Arden says Chinatown XR provided an invaluable testing ground for what they’re calling the “Hourglass Pipeline.” The Hourglass is a way of directing users through a virtual world. It’s meant to strike a balance between allowing for maximum freedom within virtual space, while discreetly encouraging users through specific points along a storyline in order to keep a narrative moving.

“Sean [Ronan] and his company believed we were capable, and they had faith in us and in our idea, and they invested in us,” Sean Arden says. “We’re really grateful for that faith and for that collaborative spirit.”

He adds that BGML Director Maria Lantin offered her full-throated support at a key time, without which “none of this could have happened.”

Maria, for her part, says Chinatown XR is “exactly what that [BGML] was created to foster.

“It’s a project that blends the technical and artistic expertise of our students with an innovative and local cultural experience. We’re thrilled to have been part of this effort.”

Sean Ronan says the project is on the verge of being delivered to the Canadian Media Fund (CMF), which provided initial funding for the project through a CMF prototyping grant. (Binoodha, he notes, is currently leading end-user testing — typically a final step in the development process of a product). He sees the project as a first step to a much more finely tuned future version. But he also says he’s looking for ways to make the current version available for the public.

“It deserves to be seen,” he says. “It’s interesting and relevant. It’s also inspiring from a creative perspective, because the art is wild. It’s just really, really good. We very much hope to see the relationship that’s been established here continue.”