“It’s like the little engine that could,” Connie Watts, Associate Director of Aboriginal Programs at Emily Carr University, wrote to me in an email at the start of December.

Connie was reflecting on the strength of the Aboriginal Gathering Place’s programming in a year that was anything but straightforward. She and her colleagues — Brenda Crabtree, Director of Aboriginal Programs and Special Advisor to the President on Indigenous Initiatives, Aboriginal Program Coordinator Angela Marston and Sydney Pickering, AGP lead researcher — have good reason to feel a kinship with the unstoppable blue locomotive that hauled an impossible weight up a mountain. The diverse range of programming the AGP managed to deliver despite the pandemic is almost unbelievable.

With recent reports that a vaccine is on its way, Connie said she and her colleagues are looking forward to a year that may see in-person gatherings once again. But, she adds, even if things stay as they’ve been the past nine months, “we will take advantage of anything we can to make sure our community is being engaged.”

With Connie’s boundless strength and optimism as our guide, let’s take a brief journey back through the AGP’s fall term.

All photos are by Connie Watts; courtesy of Connie Watts and the Aboriginal Gathering Place.

Three workshops in 2020 were held at the AGP as part of the Shumka Centre for Creative Entrepreneurship’s Fibreshed Field School initiative.

Brenda taught the first AGP Fibreshed workshop, treating participants to a lesson on cedar basket weaving (a technique which is part of Brenda’s own material practice).

Janey Chang taught the second class — a tutorial on how to tan fish skins into supple leather. Some of Janey’s fish skins were included in the Material Practice Wellness Kits the AGP sent to students during lockdown. 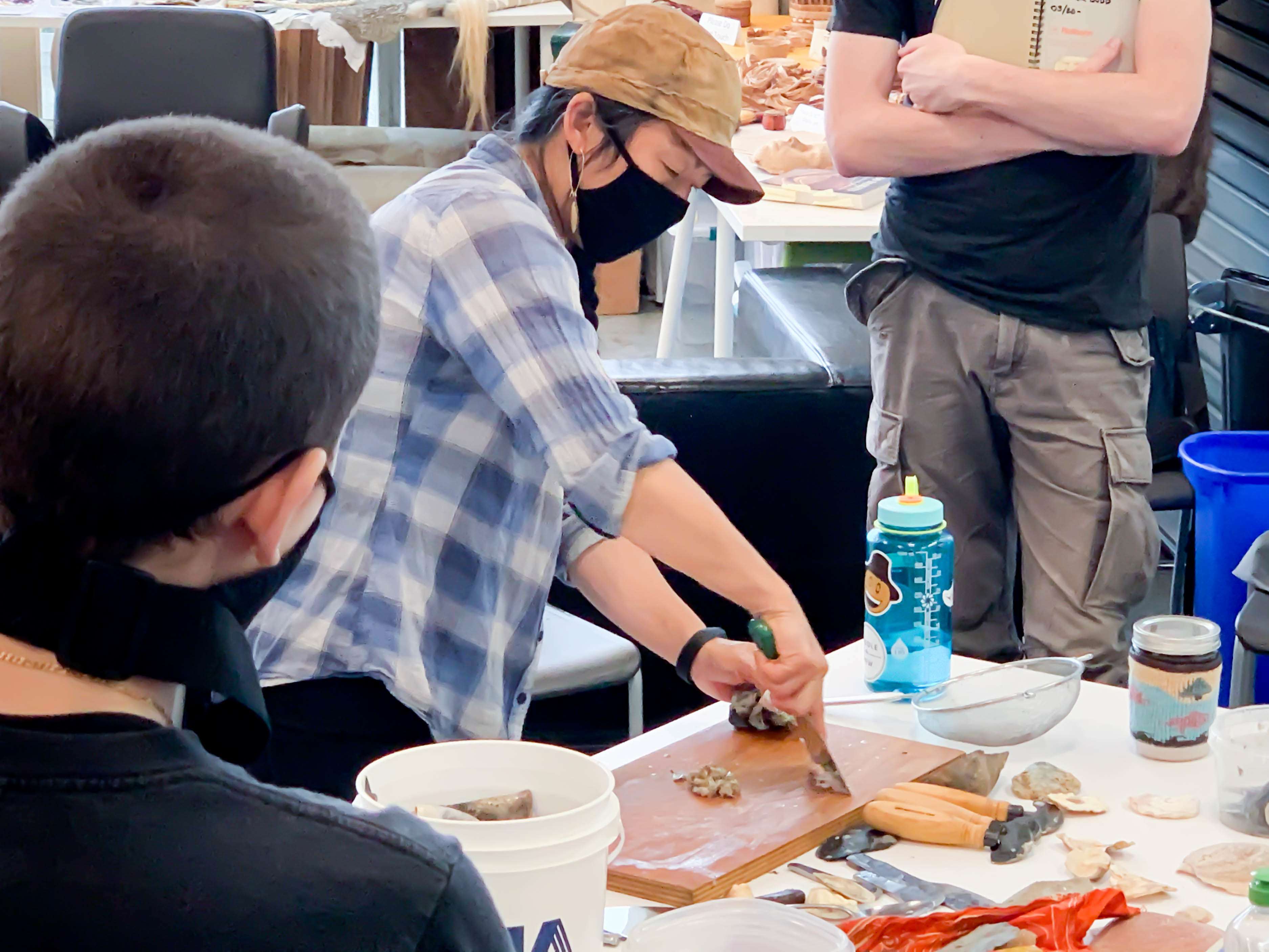 Finally, Sharon Kallis teaching about ethnobotany and fiber with Senaqwila Wyss and Meagan Innes. Sharon demonstrated to her group the art of spinning. Spinning is where raw fibres such as flax or sheep’s wool are spun into yarns. This yarn can then be woven into textiles.

On two occasions, interdisciplinary artist Xwalacktun (1982) taught groups of Emily Carr staff and faculty how to sing the Welcome Song. The song belongs to late Chief Simon Baker, whose Squamish name is Khot-La-Cha (Man with a big heart). Xwalacktun checked with his oldest daughter 'Yeltsilewet' Faye Halls, who gave him permission to teach the song to participants at ECU.

The first was held in the AGP with Brenda, Sydney, Angela and Connie joining with drums. The second was held after the Aboriginal Advisory Committee meeting in December. Participants included ECU President Gillian Siddall and Vice-President Academic and Provost Trish Kelly.

Xwalacktun reminded the group that since learning the song, they will now join him singing at each Emily Carr meeting or event.

“He says we’ve got to!” Connie says, smiling. “We’ve been called out.”

The Material Practice Student Supplies stands near the front of the AGP. There you’ll find beads, cedar bark, thread, twine, moose hair and leather, among a huge assortment of other materials. Any time the AGP is open, students can visit and collect what they need to advance their practice.

Some highlights include bits of fox fur and mink fur that were recently delivered, along with a whole array of feathers.

Many of these same materials, Connie notes, were in the Material Practice Wellness Kits the AGP sent to Indigenous students earlier in the year.

“It’s the same idea: to create access,” she says, “It’s part of what we do to stay connected and to create an environment of belonging. We make sure they have access to materials they may need to produce the work that ties them back to their own culture.”

Like the Material Practice Supplies, the AGP keeps a food pantry stocked at all times.

“As Indigenous people, especially West Coast people, we feed people,” Connie says. “It’s building community, all the way around. We always have snacks that are open to everyone, just to make sure that we’re taking care, as we do.”

Food security is a worry no one should have to take on, she adds. The pantry helps ensure students have a place they can turn to if they need food for their cupboards at home. Security, in this sense, is very much a part of a strong community, Connie says.

“You need to eat when you need to eat,” she says, “and we can’t cook for them right now because of the pandemic. So, the pantry is our alternative to say, ‘You don’t need that extra stress. Let us help take care.’”

Peanut butter, honey, and mac ’n’ cheese are perennial favourites, she notes. But the pantry is stocked with everything from canned goods, pasta, fruit, juice and granola to honey, oatmeal, snack food and even chocolate and toothpaste.

Artist and MFA student Laura Bucci approached the AGP to request support for what is known as “cultural competency.” Laura and her sister Cristina are part of the OURO Collective, which formed in 2014 to support and promote street-dance artists and culture.

Cultural competency involves the teaching of different cultural histories as a way to build understanding between people. This includes much of the AGP’s regular programming, such as its Indian 101 presentation, which members of the OURO Collective attended.

Brenda and Connie also gave the group a picture of the AGP’s other programming, including the importance of Aboriginal material practice as a way to create and support access for Indigenous students.

Larger corporations and institutions typically have the funds to provide this kind of learning for their employees, Connie says. And there are many excellent programs for large, more well-resourced groups. But smaller groups like OURO often have a harder time gaining access, she notes. The work Connie and Brenda are doing with OURO is a good example of how the AGP hopes to help fill that gap.

Depending on health recommendations, the group may return in the new year for a follow-up with artist Aaron Nelson-Moody (Splash).

“It’s nice to create a platform for them to engage,” Connie says. “Because they want to engage. They deserve too. Everybody does, regardless of their economic situation.”