“A big part of decolonizing is changing your mindset, and sensorial stimulation changes your mind on levels you can’t even identify,” multidisciplinary artist, curator and ECU faculty member Valérie d. Walker tells me in September via video chat from her Vancouver studio.

When an idea is felt — not merely understood — something happens to a person, she continues.

“You change. And you carry that change with you. I do believe that. That’s part of the purpose of art, is to change you, and for the better if possible.”

Valérie’s reflection comes amid the reinstallation of her monumental immersive textile work, Indigo Reverberations, in the rotunda of the Vancouver Art Gallery (VAG). The work appears as part of the VAG’s Vancouver Special: Disorientations and Echo exhibition, showing through January 2022.

Indigo Reverberations occupies the grand, winding space in stunning fashion, with 20-metre lengths of hand-woven cotton hanging a full three storeys from just beneath the rotunda’s dome and oculus to its marble floor. The august, undulating textiles all bear hand-shaped resist-dye patterns of natural indigo — one of Valérie’s longtime materials, which infuses the space with a musky aroma. Meanwhile, the cotton dampens sound in the notoriously echoey chamber, filling the space with an ambient hush reminiscent of running water. 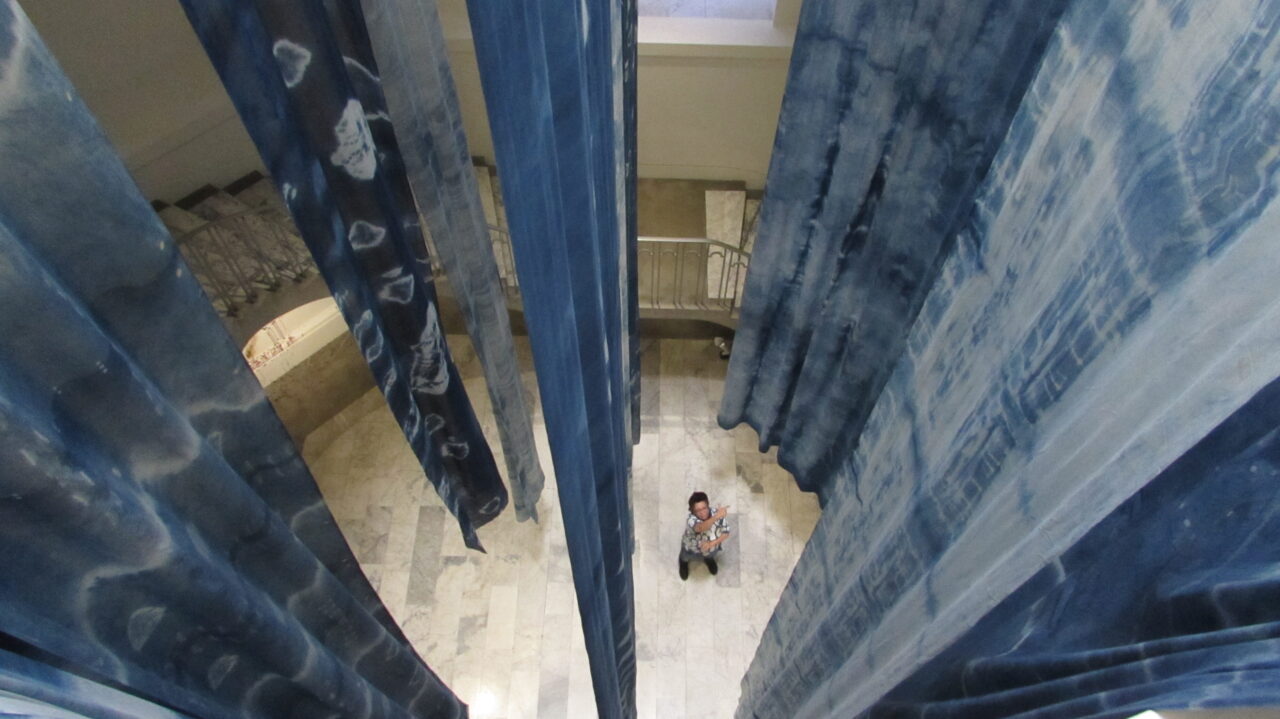 For Valérie, the sensory impact of works such as Indigo Reverberations are not simply phenomenological — they’re a form of storytelling. (Photo by M Lubell. Courtesy Valérie d. Walker)

For Valérie, a self-described “Queer BIPOC Griot” (a West African term for a travelling artist or bard), the sensory impact of works such as Indigo Reverberations are not simply phenomenological — they’re a form of storytelling.

“I’m very interested in what story we’re telling and where it’s going to connect to the audience,” she says. “When I’m working with Indigo, I’m patterning stories. In weaving textiles, I’m writing stories with a thread.”

These stories speak to histories both centuries-old and contemporary. Indigo was a major slave crop in the Americas, as was cotton. A year of global reckoning with systemic, institutional and individual racism have once again foregrounded how discourses around inequality and oppression are as urgent today as ever.

The Vancouver Art Gallery’s Disorientations and Echo show, which includes nearly exclusively BIPOC artists, is in part an effort to counterbalance the gallery’s own history as a contested space for artists of colour, adding yet greater depth to Indigo Reverberation’s discursive marrow.

But it would be a mistake to view Valérie’s work merely as a meditation on these themes. As with her broader practice, Indigo Reverberations aims to transform the “painful legacy of colonial extraction” into a vision of decolonialized, capacious imagination. 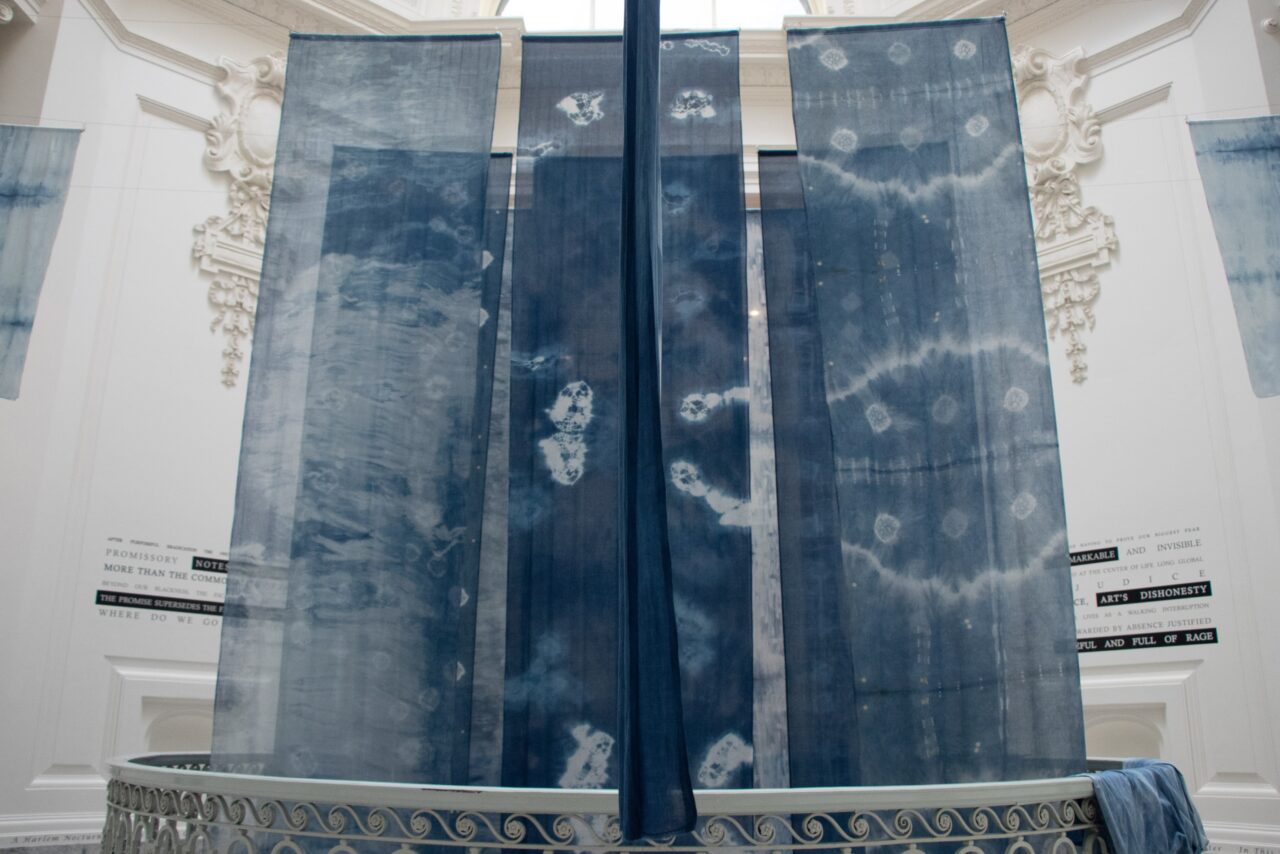 The intense, often repetitive labour and many months of time required to prepare and tend the indigo dye vat speaks to a revolutionary future: for most people, labour is performed over time in order to accumulate capital, which itself often stands in for the value of the individual. Valérie’s practice demonstrates how labour can be directed toward the manifestation of experiential, decolonial infrastructures that at once entertain, educate, engross and uplift while simultaneously overturning logics upholding and concealing the status-quo.

Indigo Reverberations also operates in subtle conversation with the other artworks in Disorientations and Echo, Valérie notes. Shades of indigo blue appear in a number of other artworks, while Valérie recounts being “thrilled” to discover that her use of fabric relates to Soul Power, the VAG’s retrospective look at 30 years of work by prolific Black Canadian artist Jan Wade. In this way, a broader, more inclusive form of storytelling is invoked throughout the gallery, rather than being confined to Indigo Reverberations, Valérie says.

This interconnectedness is only partly coincidental; Valérie and curator Phanuel Antwi — who originally contacted Valérie in 2019 to talk over participation in Disorientations and Echo — spoke at great length about making “a backbone for the show” that could be open enough to underpin any shared concerns that might emerge among the many artists who would also participate.

“You can be open to interactions with others in a positive way,” Valérie tells me. “I do that in my work: it’s not exclusive. It’s open. It’s waiting for others to have a dialogue with. And it’s there to be dialogued with.”

The sight of gallery-goers lying on the ground beneath Indigo Reverberations, playing hide and seek among its folds or wandering through the hanging fabric provides further evidence of the work’s openness, Valérie suggests. 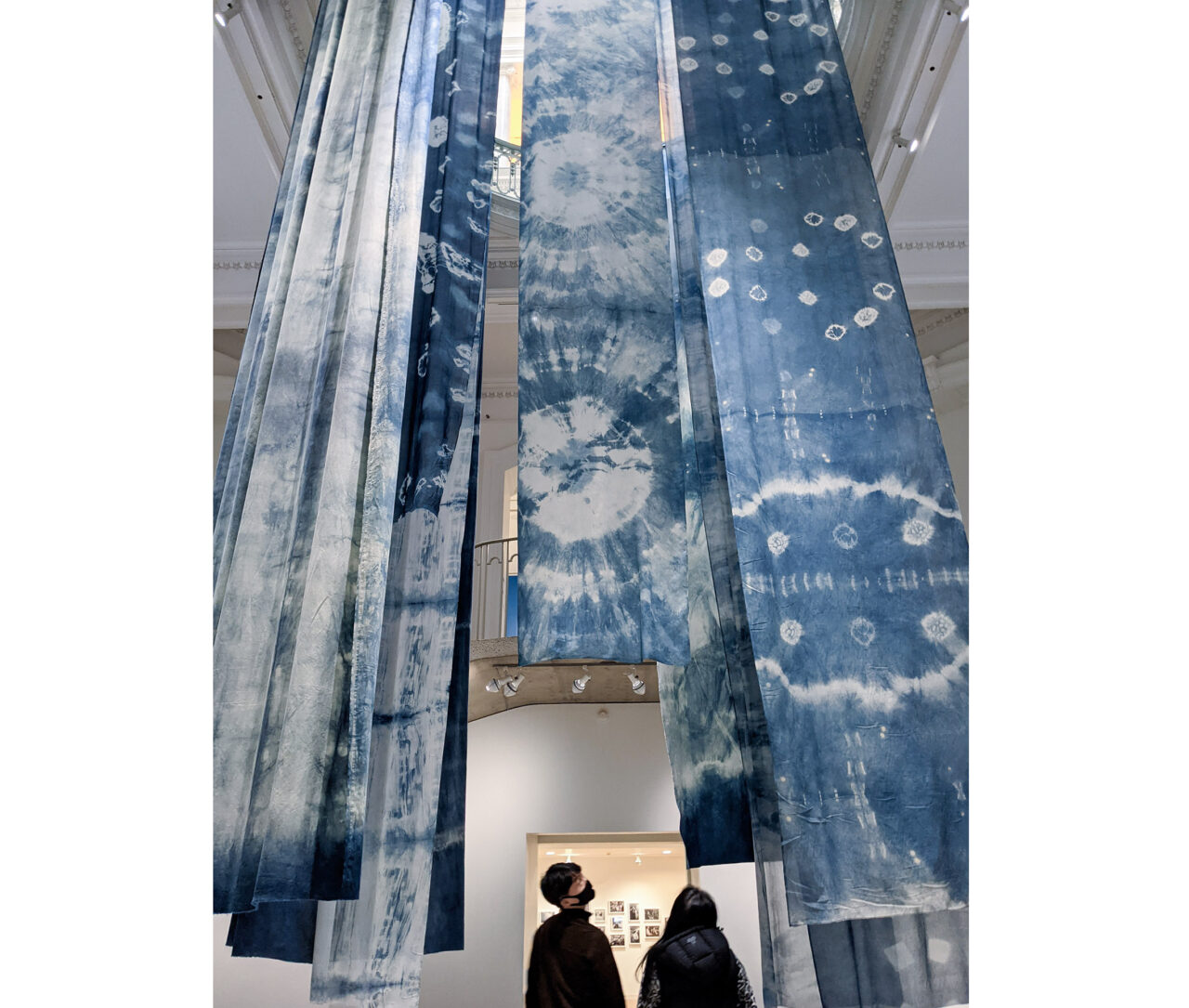 “You can be open to interactions with others in a positive way,” Valérie says. “I do that in my work: it’s not exclusive. It’s open. It’s waiting for others to dialogue with. And it’s there to be dialogued with.” (Image courtesy Valérie d. Walker).

But the experience hasn’t entirely been smooth sailing, she adds. At one point earlier this year, Valérie became very sick with COVID. Even after recovering, Valérie has continued to struggle with fatigue and joint pain, requiring her to lean more heavily on assistants than she normally would. She found strong support in Kiara Havixbeck, an artist and former student of Valérie’s, with whom she was connected via the Shumka Centre for Creative Entrepreneurship’s Art Apprenticeship Network program.

“Kiara is great,” Valérie says. “I needed somebody strong who wanted to work with me and wasn’t afraid to do a lot of physical work. Kiara was excited to work and to learn a lot of textile stuff, and she worked with me at the art gallery for close to five weeks.”

But as the show approached its open date, a last-minute change order from one of the show’s curators set Valérie and Phanuel back on their heels. An internecine struggle over the expansiveness of Valérie’s monumental work highlighted how much of the same exclusivity and inequity that has historically been allowed to flourish within public institutions is still alive and well today, even as those institutions work to confront their histories, Valérie says.

Momentarily, Valérie considered dropping out of the show, she tells me. But after speaking at length with Phanuel and with her daughter, she chose to “perform an act of compliance.” She once again drew on her fluency with the history of ancient and contemporary material traditions to alter Indigo Reverberations. Using an ancient form of artistic Japanese rope bondage called shibari (which is also popular amongst practitioners of S&M), Valérie rolled her work away from the floor, and bound it in knots of black satin. She also added gold chains, further linking the work to discourses around slavery and bondage, privilege and servitude.

“What’s really weird is that people who’d never seen the work previously still liked it once I’d changed it,” she says. “That’s a problem for me: it’s still beautiful. It’s still powerful. It’s still immense. Still, when I go there, people are laying on the floor, looking up, taking photos. What’s missing is the sensorial experience.” 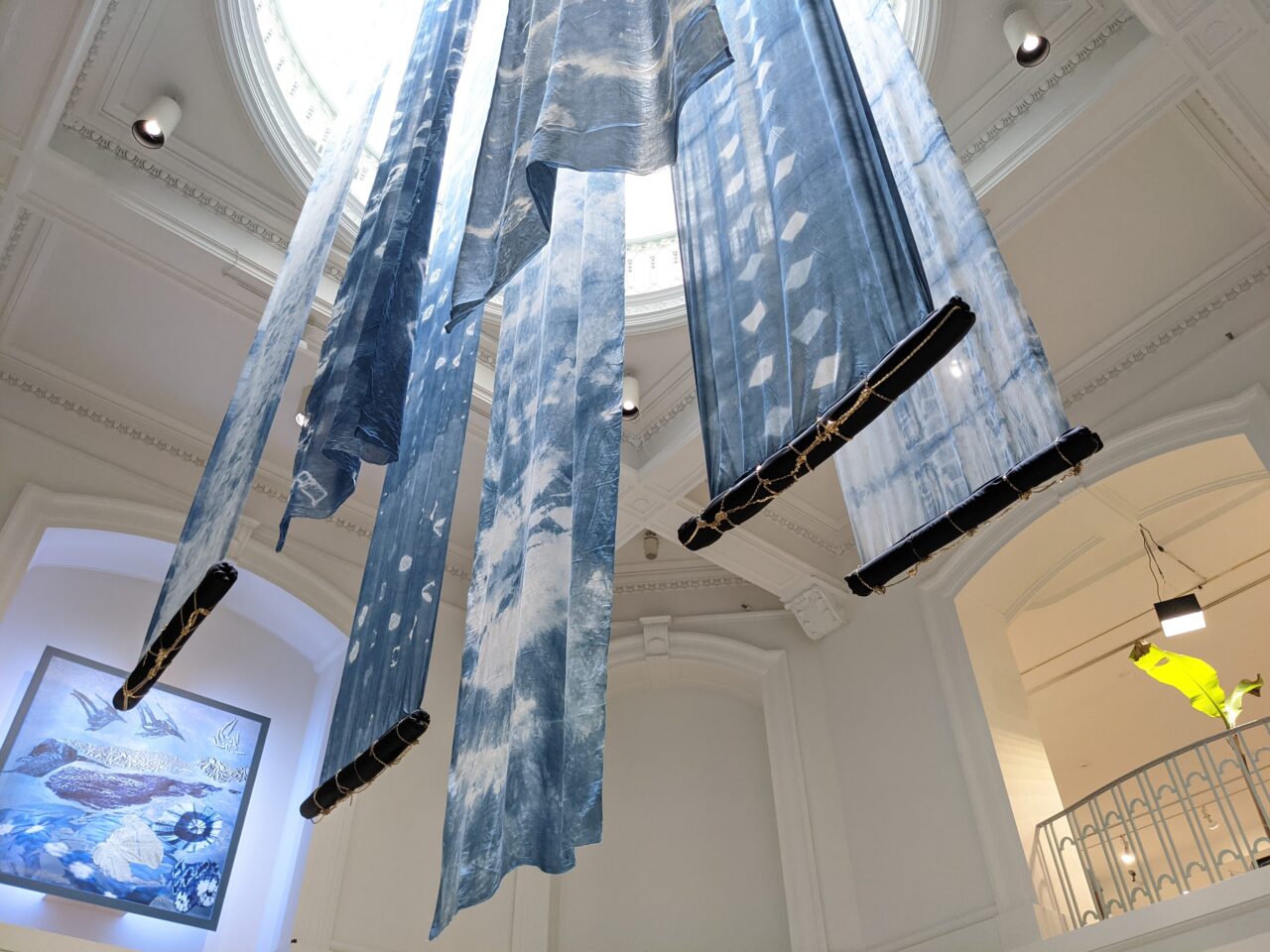 That finally changed in the fall, as Valérie found herself with an opportunity to reinstall the work as she’d originally intended it to be seen. The vast swaths of fabric once again undulate under a sunlit portal, and the mysterious sound of running water has once again returned to mystify museum-goers and gallery guards. And Valérie, true to form, is already conjuring future-visions from the stuff of the present.

“I’m now thinking about doing another installation with multiple indigo panels in bondage, because of this experience.”

On Friday, Nov. 26, Valérie will be taking part in a performance at the VAG titled Black Breath Spectacle, created by Charles Campbell, another artist whose work is featured in Disorientations and Echo. The performance “turns the simple act of breathing into a response to the poor representation of Black people in our art institutions and a meditation on our collective power and vulnerability.”

You can view Indigo Reverberations and all the rest of the works in Vancouver Special: Disorientations and Echo in person at the Vancouver Art Gallery, now though Jan. 2, 2022. Visit Valérie’s website to learn more about her work.

Visit ecuad.ca today to learn more about undergraduate studies at ECU, which begin with Foundation year, including the New Media + Sound Arts program.