A forthcoming issue of Canadian Art on the theme of antimatter will feature an ongoing project by ECU faculty members Randy Lee Cutler and Ingrid Koenig called Leaning Out of Windows: Art and Physics Collaborations through Aesthetic Transformations.

The project aims to bring together scientists and artists in a creative dialogue to uncover ways in which their practices — which, at first glance, appear to share little in common — overlap and transmit knowledge in productive and often startling ways.

“We've been coordinating interactions between artists and scientists to look at how knowledge within physics moves through the poetic,” says Ingrid, Associate Professor at Emily Carr University and Artist in Residence (until 2021) at TRIUMF, Canada’s particle accelerator centre.

Each phase of the four-year project — which is supported by a Social Sciences and Humanities Research Council of Canada (SSHRC) Insight Grant — is organized around a thematic subject. Currently, the artists and physicists are exploring the idea of “emergence” — a term which refers to instances where phenomena or behaviors in complex systems are not present in their individual parts.

Crudely put, this concept can be understood to mean something is “emergent” when the behaviour of the whole is “greater” (or qualitatively different) than the sum of its individual parts.

“We have 28 artists that we curated more than a year ago. And we organized a science seminar where the physicists at TRIUMF presented ideas on emergence from their practices,” Ingrid explains.

The previous phase, about which the upcoming Canadian Art story was written, explored antimatter. The cover of that upcoming issue will feature an artwork by ECU Associate Professor Mimi Gellman, who is also one of the artists participating in Leaning Out of Windows. 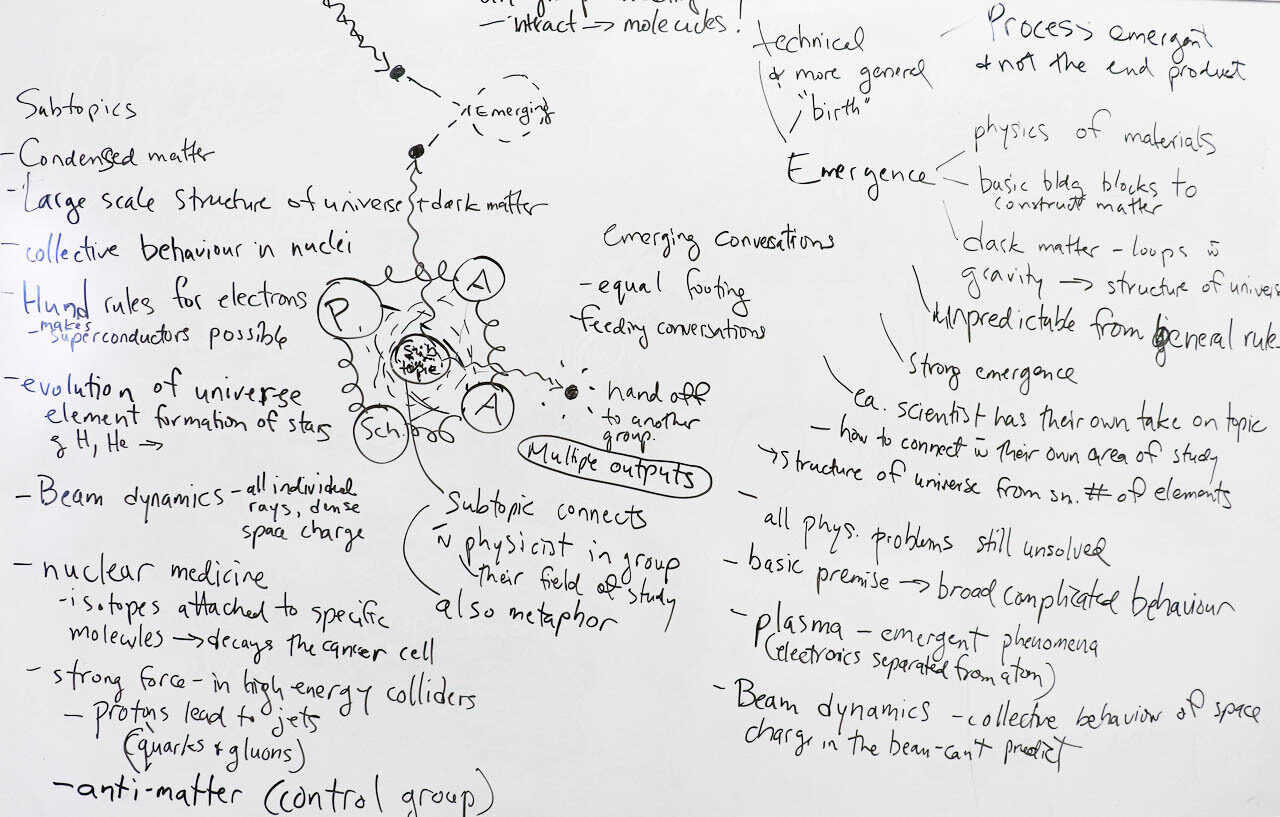 Image courtesy Leaning Out of Windows

The talks given by TRIUMF physicists on antimatter are available online, and Randy — who is a Professor at ECU and will represent Canada at the Biennale of Sydney 2020 — notes they provide a window into the immensity of the topic. The concept, she says, is “so challenging to understand.”

“The artists are always a little overwhelmed,” she continues. “And we say to the artists, we do not want you to illustrate the ideas but rather, we want you to respond in relationship to your own practice. So, it's intriguing to see how they approach the challenge.”

The current theme of “emergence,” however, has by no means narrowed the vastness of the project’s scope, Randy says.

“One of the physicists, Jess Brewer, proposed emergence as a topic because he said it would make the physicists as uncomfortable as the artists,” Randy continues.

“We as artists are leaning out of windows, we’re in a place of discomfort and not-knowing, and the physicists are treading unknown territory as well.”

This process of treading the unknown has conjured an even more unexpected outcome for some of the scientists involved -- they’ve asked to be a part of the artmaking process.

“After the first phase, with antimatter, we went back to the physicists at TRIUMF; we were showing them all the artwork, and hearing from them about their experience in the collaboration, and some of them said ‘Well, we'd like to go into the studios and be involved hands on,’” Ingrid recounts.

“So, we incorporated that into the next phase. The resulting work will be shown (in the January, 2020, exhibition at Emily Carr’s Michael O’Brian Exhibition Commons), including both individual works by artists, and in several cases include work by the physicists who were completely involved in the production process.” 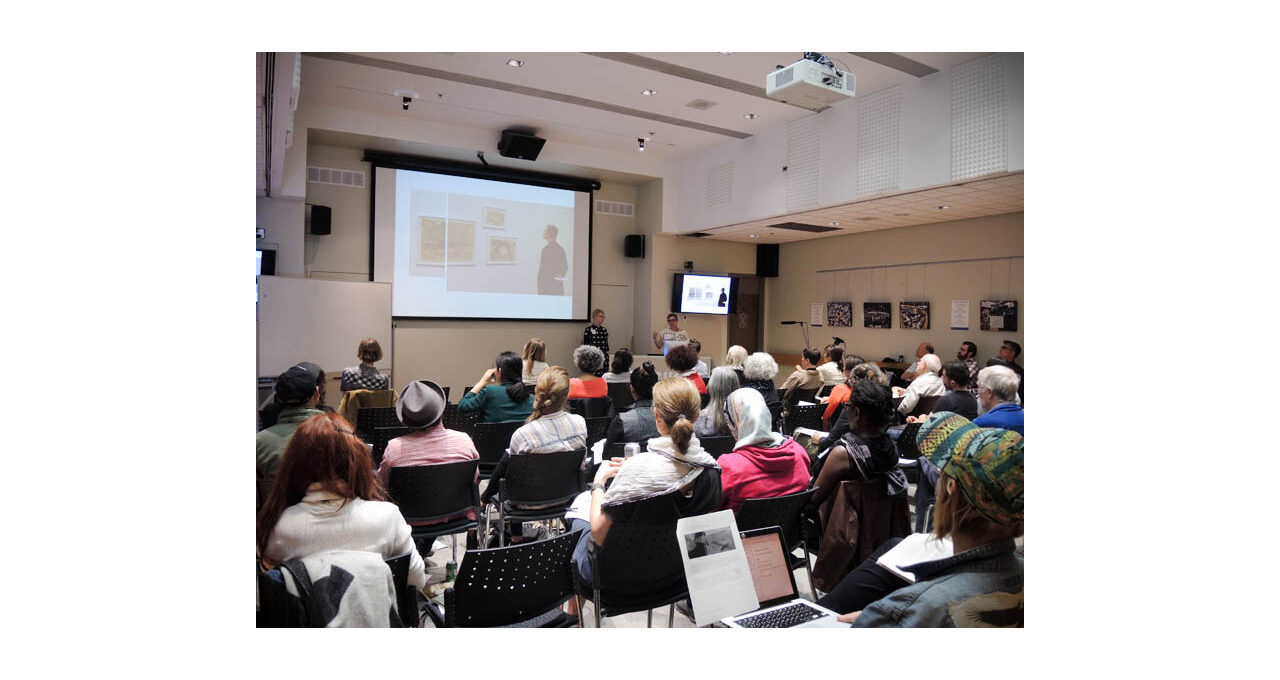 This delightful surprise, notes Ingrid, is emblematic of the aim of the Leaning Out of Windows project.

“Bruno Latour, when he wrote about how we've never been modern, was referring to exactly this problem of silos; that we don't connect phenomena that happen in the world — the political events, the geophysical, the sociological and so on,” she says.

“We don't connect them. We’re in these separate places. We don’t look at the entanglements. And that's a huge problem for the way we're going. So, we also see this project as a very important endeavour for thinking in new ways, and in that sense, what would this enable as yet unimagined?”

Randy concurred, adding the mutual resonance Leaning Out of Windows’ physicists and artists have been finding in each other’s practices has been borne out by the public’s reception of the finished work.

“So often, we're in our respective communities, and what I love about this project is that we’re communicating with a broader community,” she says.

“We had an exhibition in 2018, and lots of people came and really enjoyed it. It gave them an entry into science, and physics in particular, and it gave them an accessible entry into contemporary art practice. One of the things I appreciate about the Leaning Out of Windows project is its accessibility, even though the work is challenging.”

Leaning Out of Windows will ultimately result in a publication, sometime in 2021. Work from the current “emergence” phase of the project will be on display at the Michael O’Brian Exhibition Commons at Emily Carr University, from Jan. 8-26, 2020, with the opening on Jan. 15, 2020. A symposium (or what Cutler and Koenig call the "Translation Hub") will follow on Jan. 25