Artist and educator Sydney Pickering has been hard at work running a series of community-building events with the team at the Aboriginal Gathering Place (AGP) as part of a new program run by arts support organization Mass Culture.

The Research in Residence: Arts’ Civic Impact program aims to analyze the impact of the arts on communities. Toward that end, five groups, based at universities across the country, are currently working on research projects in collaboration with arts organizations to come up with ways to measure this impact.

Sydney, who works as Aboriginal program coordinator at the AGP and is currently pursuing her MFA at Emily Carr University, has been looking at how programming centred around Indigenous cultural knowledge generates access, community and connection. Measuring these kinds of effects can be tricky, but Sydney says translating between different worlds is familiar work for her and her colleagues.

“We’re researchers and academics at the AGP, but we’re also creative professionals, so we’re already always trying to come up with different languages to connect with people and to create meaning,” Sydney tells me. “Sometimes you just can’t get a message through when you talk a certain way or write a certain way. You have to be creative to figure out how to connect.” 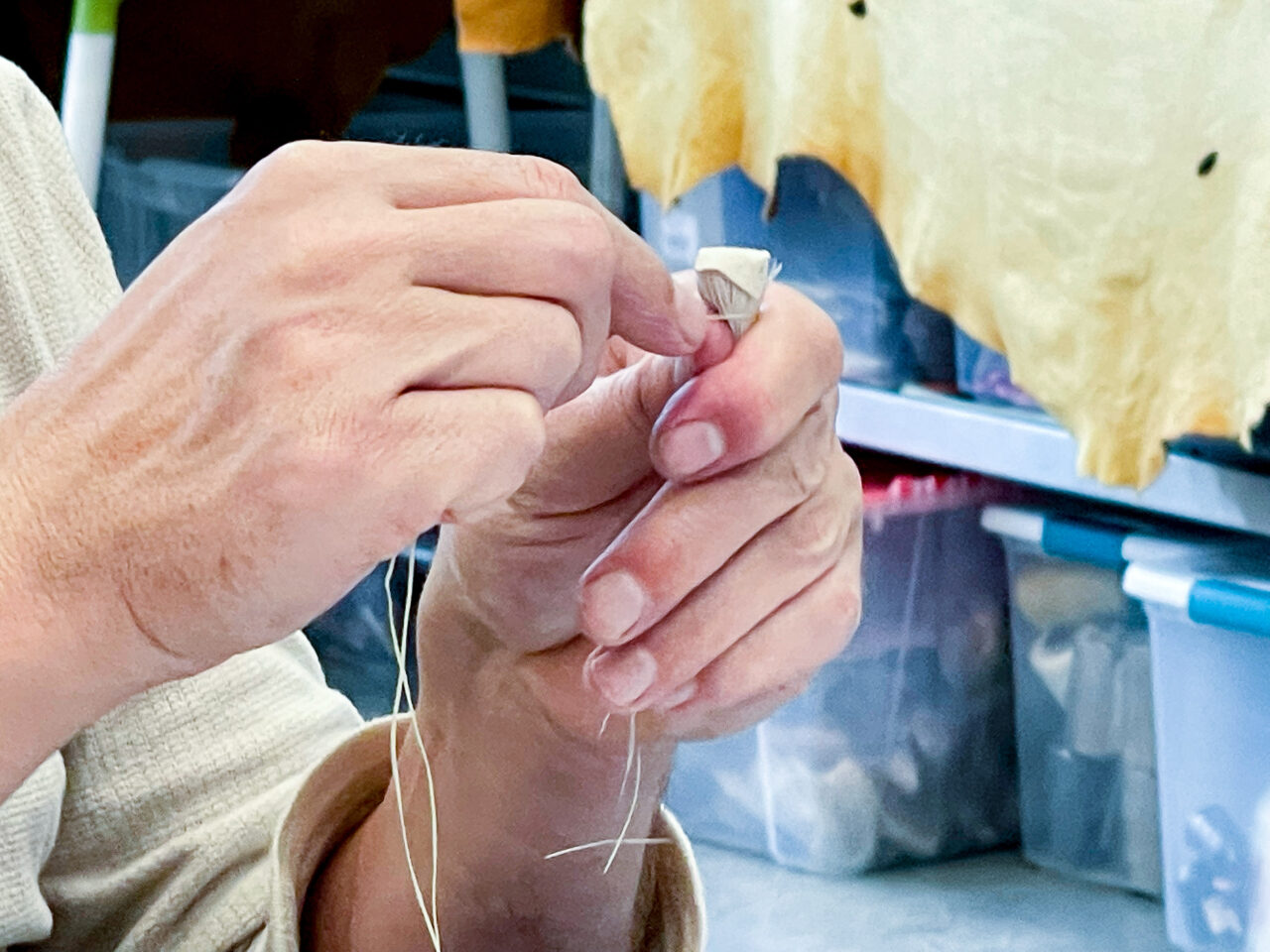 A participant works during a drum-making workshop at the Aboriginal Gathering Place. (Photo by/courtesy Connie Watts)

So Much More Than Tickets Sold

At its core, Mass Culture’s Research in Residence program is founded on recognizing how challenging it can be to measure the impacts of arts and culture, Robin Sokolski, Mass Culture director of organizational development, tells me. Oftentimes, doing so means simply counting the number of tickets sold for an event, or the number of dollars generated by an initiative. But those numbers leave out huge amounts of data that are much more subtle, and more difficult to measure. In fact, arts impact can be so complex that many arts organizations themselves have trouble understanding how to talk about it.

That’s where Mass Culture’s Research in Residence program comes in.

“I’m a big believer that anything can be measured, including the arts in all of its intangible benefits,” Robin tells me via video chat. “So I put out a challenge, asking what would a qualitative impact framework look like for the arts? We were still a bit unclear about what that meant exactly, but that’s the kind of project I like to work on — to jump off into the unknown and see what happens. Because there are really smart and big-thinking people out there who like to come together and think through these challenges.”

Robin attracted funding and in-kind support from organizations including the Canada Council for the Arts, the Federal-Provincial-Territorial Table on Culture and Heritage, Critical Digital Methods Institute, the Ontario Trillium Foundation and Toronto Arts Foundation as well as Mitacs. Between them, these project partners support six researchers at five universities now conducting projects focusing on four research ‘pillars.’

These pillars are diversity and inclusion (Audree Espada and Missy LeBlanc at the University of Winnipeg and also, separately, Shanice Bernicky at Carleton University); climate and sustainability (Emma Bugg at Dalhousie University); health and well-being (Aaron Richmond at McGill University); and Indigenous cultural knowledge, which is Sydney’s focus. 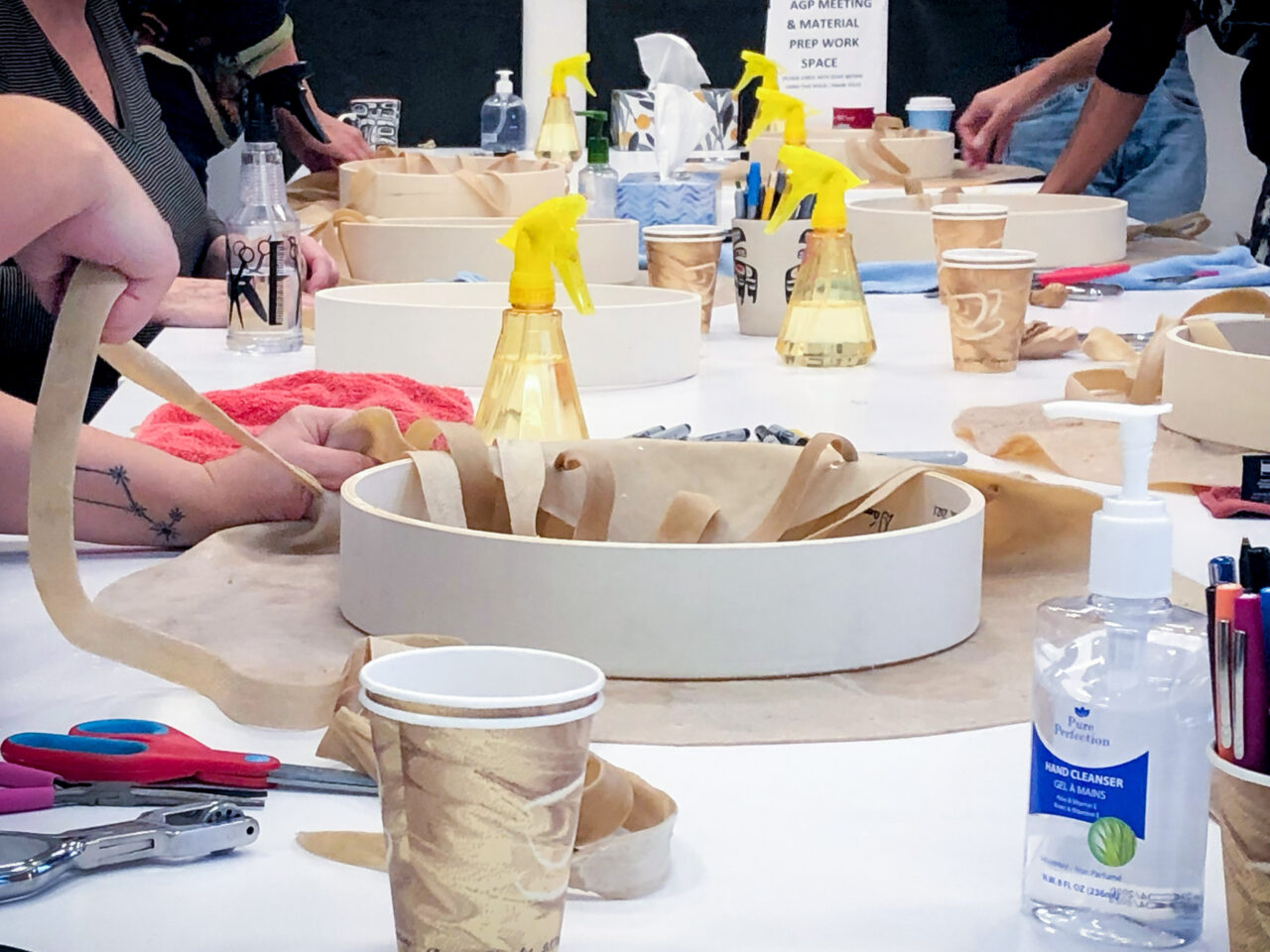 The Care That Starts to Happen

Part of Sydney’s work has been closely observing and recording the interactions of participants in four workshops and gatherings at the AGP. These included Aboriginal material practice workshops centred around learning skills such as drum-making, beading and tufting. They also included events such as Sharing Circles, which focus more specifically on oral communication and knowledge sharing.

The overarching goal, Sydney writes, is to “connect with local arts-based organizations that create innovative projects with Indigenous and racialized artists and collectives to build new ways of research methods and information-gathering that are rooted in cultural practices to foster and promote Indigenous knowledge and ways.”

As with all events at the AGP, a common thread is a natural flow of conversation among participants. Attendees have included multidisciplinary artist and curator Whess Harman, Manager of Decolonization, Arts and Culture at Vancouver Board of Parks and Recreation, writer and musician Rena Soutar, and Boca del Lupo cofounders Sherry J. Yoon and Jay Dodge.

Connie Watts, associate director of Aboriginal Programs at ECU, tells me these conversations are an expression of community as well as an exercise in community building. But these interactions have other effects too, she adds. Oftentimes, they are capable of creating profound shifts in participants.

“When you get together with people who are like-minded, who are interested in doing the work, finding that work of equity, reconciliation, decolonization — when you’re around that different lens, that different way of looking that everyone brings — it’s magical,” she tells me.

“When people connect to that experience — when people feel it and live it — it’s life changing. The awareness that starts to happen, the care that starts to happen. You’re just in a different place. It doesn’t work the same with everyone, of course. But there are very few that have been in any of our workshops that don’t have a shift in their energy, their being, their perspective, the whole thing.” 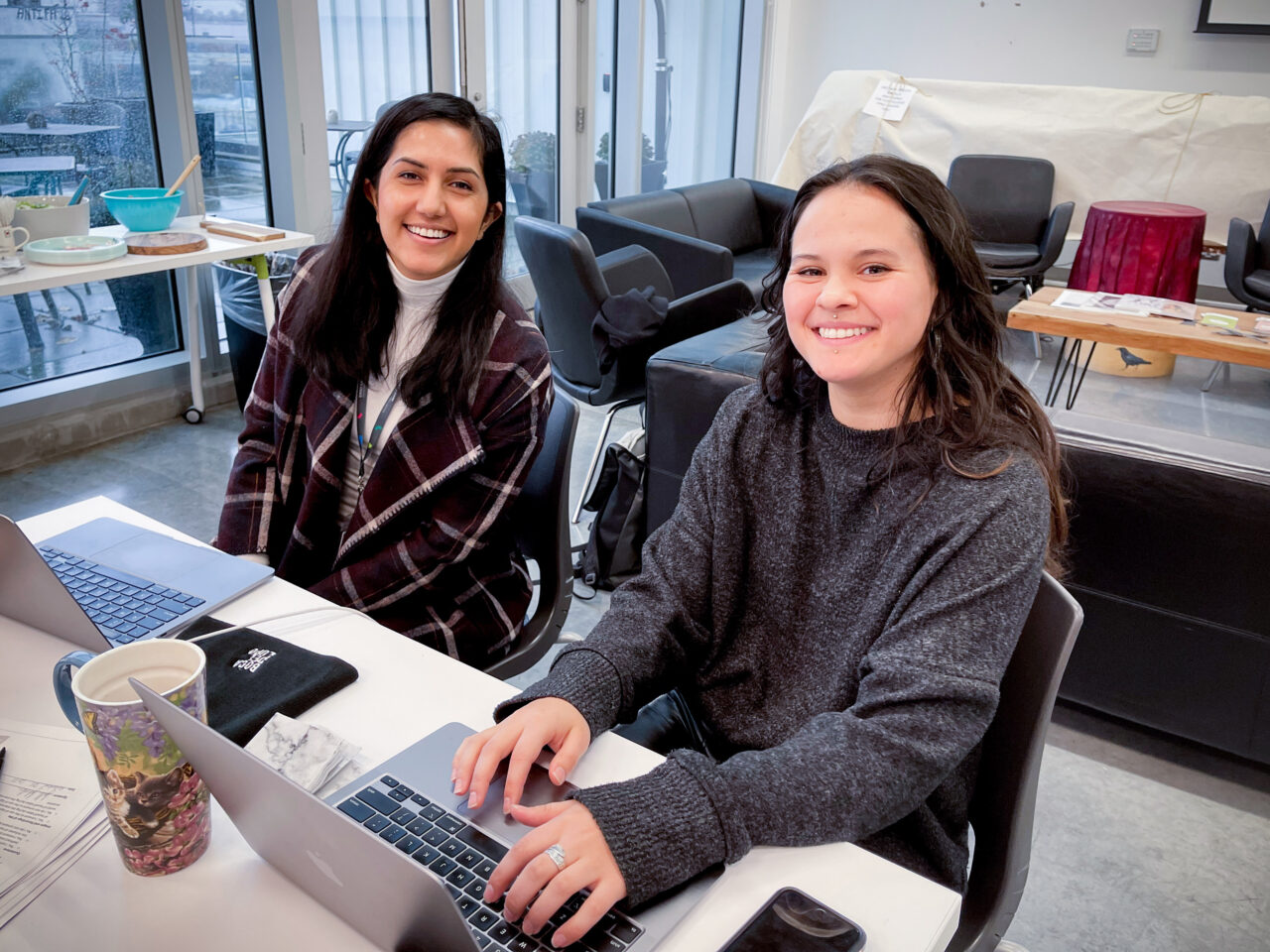 Nobody Can Do It Better

To help Sydney document this interplay, the AGP hired designer, researcher and educator Nadia Beyzaei as Sydney’s academic supervisor for the research component of the project. Via her role as coordinator of the Health Design Lab, Nadia had already worked with Brenda and Connie on projects including the Decolonizing the Healthcare System through Cultural Connections project.

“The AGP has a well-established practice of running these types of workshops, from the lengthy material prep to their seemingly effortless and intuitive ability to make people feel comfortable in spaces — there’s nobody who can do it better. They’ve totally nailed the balance of blending community and Indigenous culture,” Nadia tells me. “My piece in this work has been to look at how we gather, synthesize and share back the conversations that are happening, without impeding what’s going on and making it about research and researchers.”

For this project, Connie views the role of a researcher as a witness — someone who is responsible for passing on the stories and histories they witness to others so that they are recorded in memory. Nadia and Sydney took on this role with a research lens by using Miro to live-document conversations as participants intuitively flowed between moments of dialogue and moments of making. To build on this, they piloted “reflexive thematic analysis” as a method for categorizing and summarizing the different topics participants touched on during the workshops. This approach helped reveal the ebb and flow of broader themes that ran through the conversations between participants and teachers, including Nicole Johnston, the AGP’s Aboriginal programs facilitator.

Jessey Tustin, a visual arts student specializing in illustration, was also present to do visual note-taking during the sessions, producing yet another kind of record of community building within the workshops. 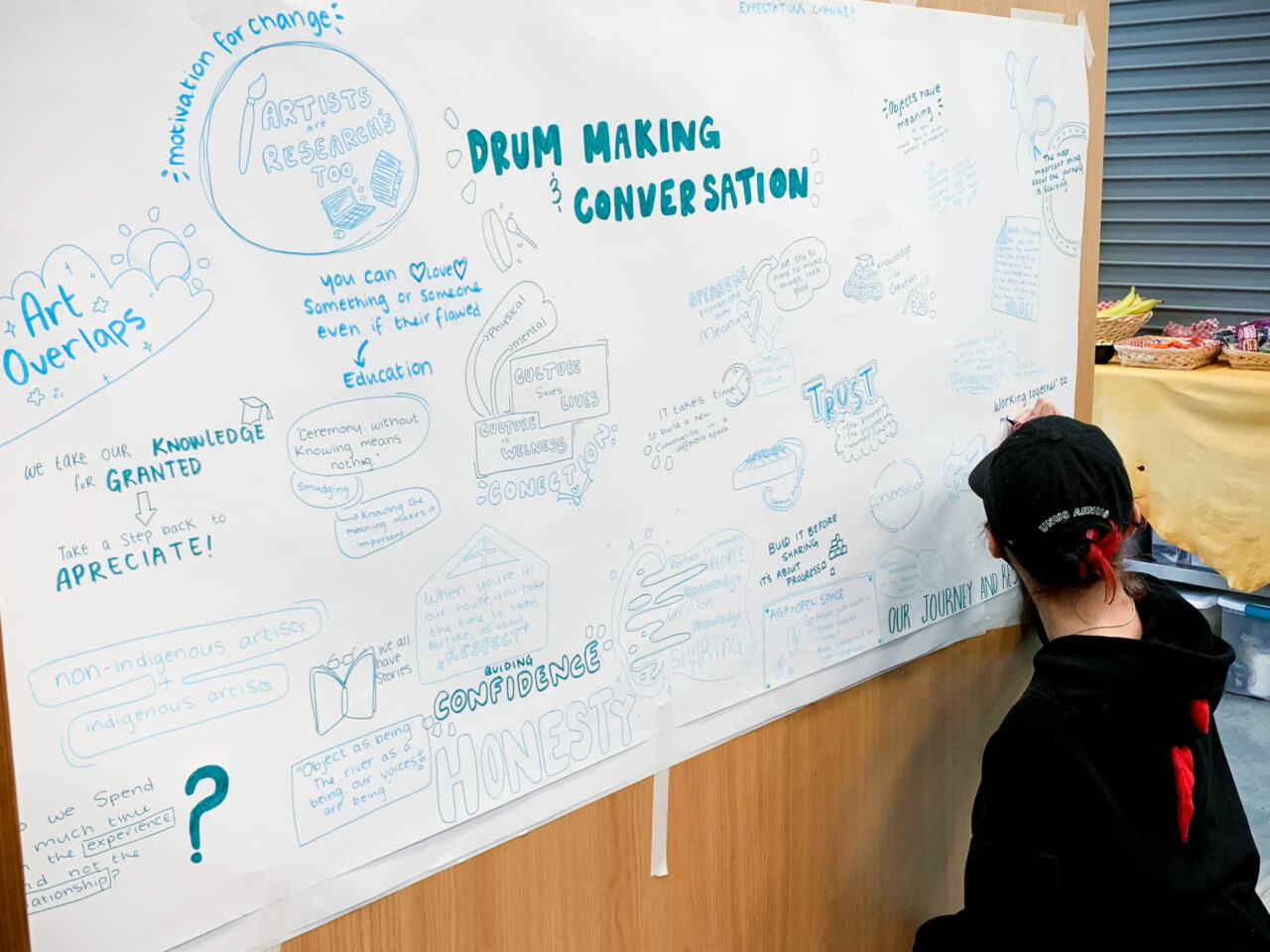 Responsive to the Real

Eventually, all of this material will be gathered into a report and submitted to Mass Culture, Mary Elizabeth (M.E.) Luka, co-facilitator with Mass Culture, says. M.E., an assistant professor of Arts & Media Management at the University of Toronto Scarborough, brings to the project many years of experience working across Canadian arts sectors in research, policy development, management and fundraising.

Broadly speaking, she tells me, these reports will help demonstrate how each research group’s “specific, local knowledge” can help other arts communities and organizations conduct similar research and demonstrate their findings to the public.

But the term “report” is very much open to interpretation, she adds. Researchers will be given broad leeway to submit material that preserves the range and complexity of their findings.

“One of the things that is so much fun — and useful — about working in this area of research is it’s so emergent,” M.E. says. The open-endedness of the Research in Residence initiative is also crucial to ensuring its findings reflect the real experiences of people working in the arts sector, she continues.

“This project is really about what happens when smart people from many perspectives can come together and develop ideas or solutions, things that we agree as a group are important to address. This is a network of linked interests — of people who are really interested in trying to figure out how to make changes in the sector in ways that are responsive to the people on the ground. And it’s so important to listen to what people are actually doing and saying about the work that needs to happen.” 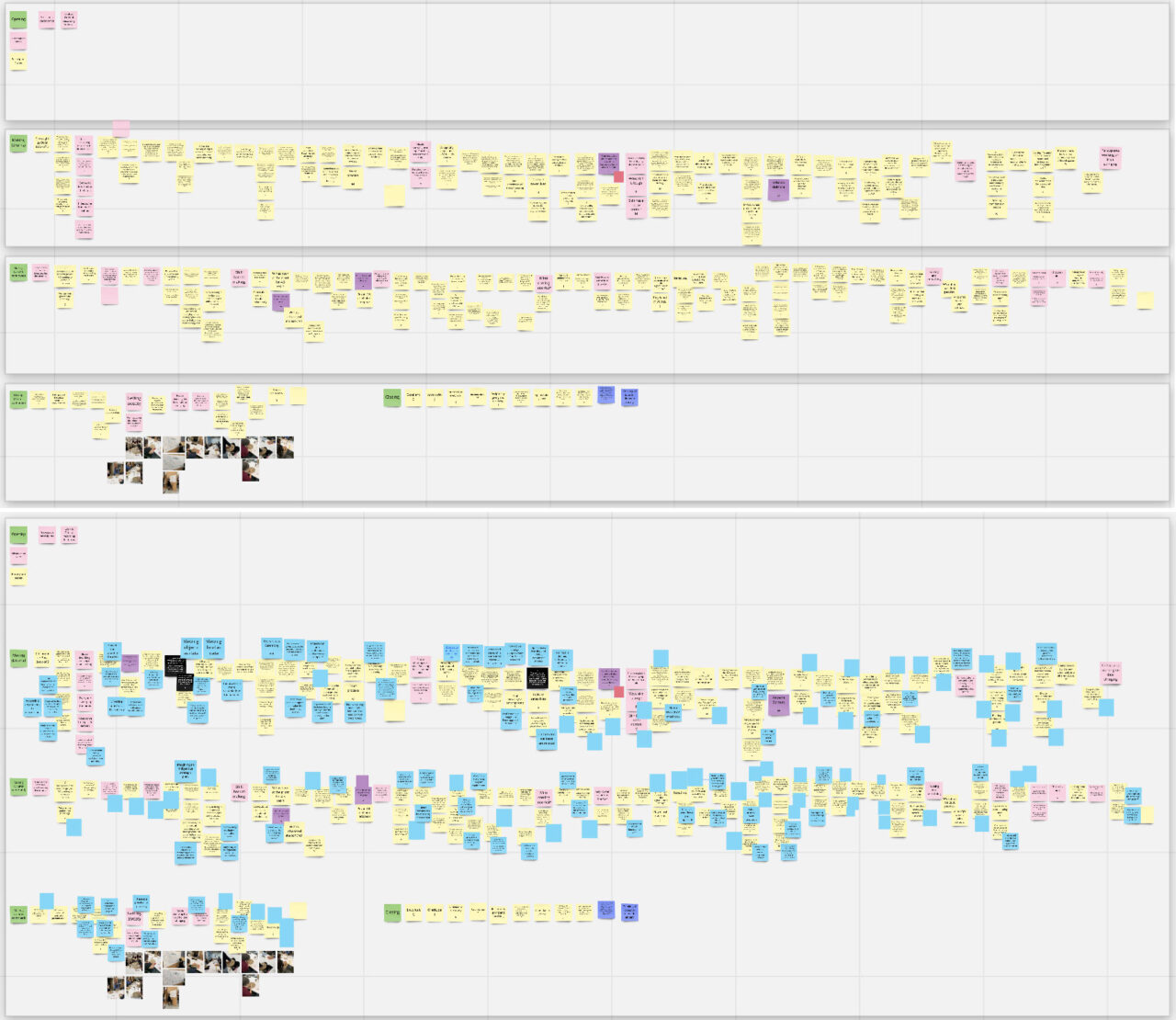 The researchers at each of the five universities have been meeting with their Mass Culture and university supervisors including Robin and M.E. on a monthly basis. During these meetings, researchers also interview one another. This “talking across boundaries” helps researchers understand how to explain their findings to people outside their community, M.E. says. But it also helps develop a “cohort of support” among researchers which ideally will endure once the project is finished.

Meanwhile, Mass Culture researchers are expected to wrap up their “primary data-collection phase” and begin conducting analysis sometime this spring. A series of regional round-tables and a larger gathering in Toronto are also in planning stages.

Sydney participated in an AGP hosted workshop, early March, alongside a group of scientists and forestry students and professors from the University of British Columbia. Sydney is also helping plan a multi-week series of events for National Indigenous History Month along with Connie, Nicole and Brenda Crabtree, director of Aboriginal Programs at ECU and Special Advisor to the President on Indigenous Initiatives. And hopefully, Connie adds, a separate, physical publication will be forthcoming which documents Sydney’s findings during the Research in Residence project.

Get more like it delivered for free straight to your inbox every two weeks by subscribing to our Emix newsletter today!