A state-of-the-art virtual production stage is being created at Emily Carr University in partnership with ShowMax Event Services. The stage — which harnesses the same technology used on internationally acclaimed productions including Star Wars spin-off “The Mandalorian” — is the only real-time special effects facility in an educational setting in Western Canada.

“Creating this virtual production facility at ECU will establish a hub for education, research and industry, providing opportunities for students to learn alongside professionals, and access to cutting-edge equipment and expertise for both academic research and external partners,” Steven Lam, Associate Vice President of Research and Dean of the Jake Kerr Faculty of Graduate Studies at ECU, says. “This partnership with ShowMax will mark Emily Carr as an international leader in multimedia education and research for years to come.”

At the core of the virtual production stage are large-scale LED screens known as “LED walls,” supplied by Showmax. These screens are used to create a seamless digital environment into which live actors can step, meaning a set can be built almost entirely by computer with no need for costly, time-consuming and resource-heavy set construction. 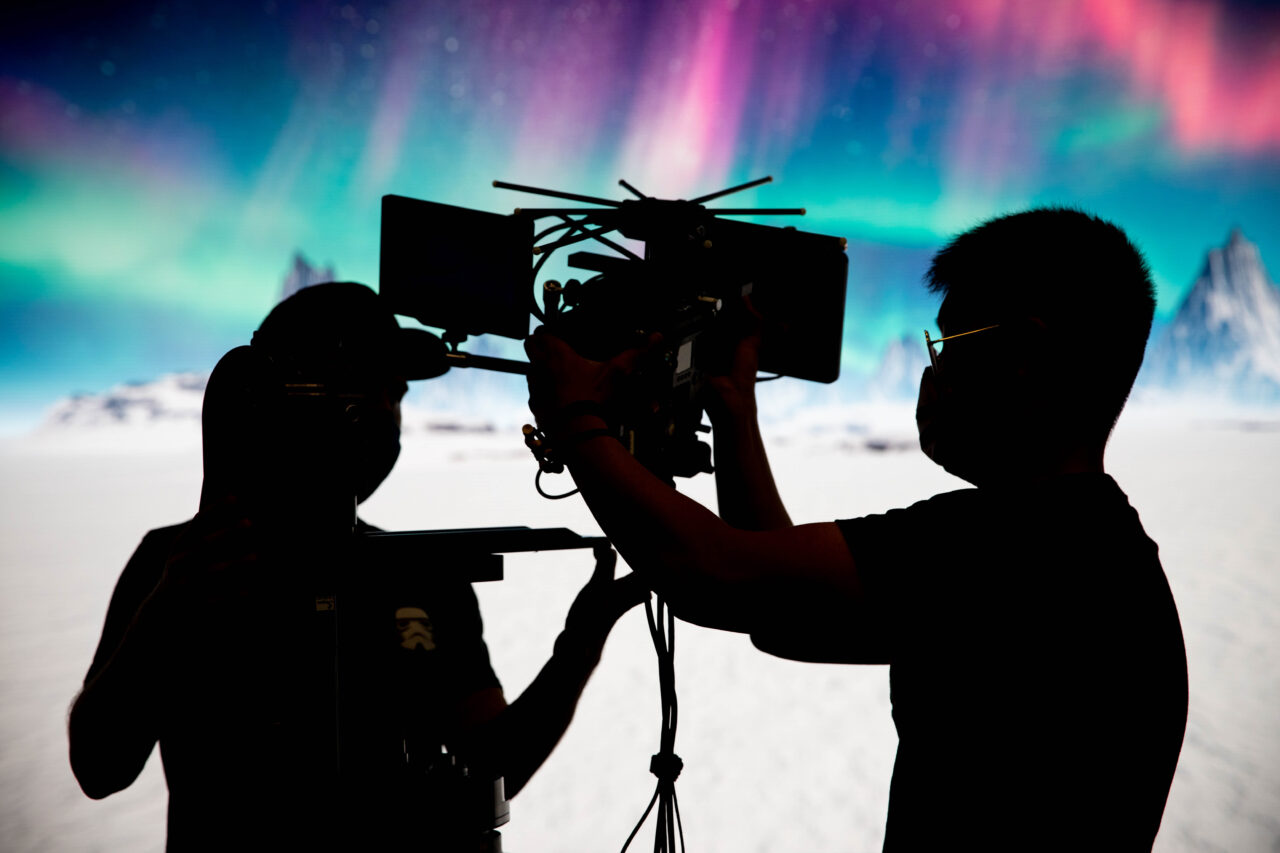 Using ShowMax's LED walls, a set can be built almost entirely by computer with no need for costly, time-consuming and resource-heavy set construction. (Photo by Perrin Grauer / Emily Carr University)

A test run for the high-tech setup was held over two weeks during the summer in partnership with production company Trembling Void and virtual production services provider ArcVFX. The production included preparation, equipment testing and an intense four-day film shoot. The shoot was aimed at producing a trailer for a show in development titled Synthesis, and involved stunts as well as a full-scale “stress test” of all the gear, says ECU Research Technician Sean Arden.

“It was smooth, hyper-organized,” Sean says. “Everybody knew what their job was. Everybody was in great spirits, was super excited about the technology. Everybody stayed in their lane and was super creative. They got all the shots they wanted, and there was no overtime. It went better than expected.” 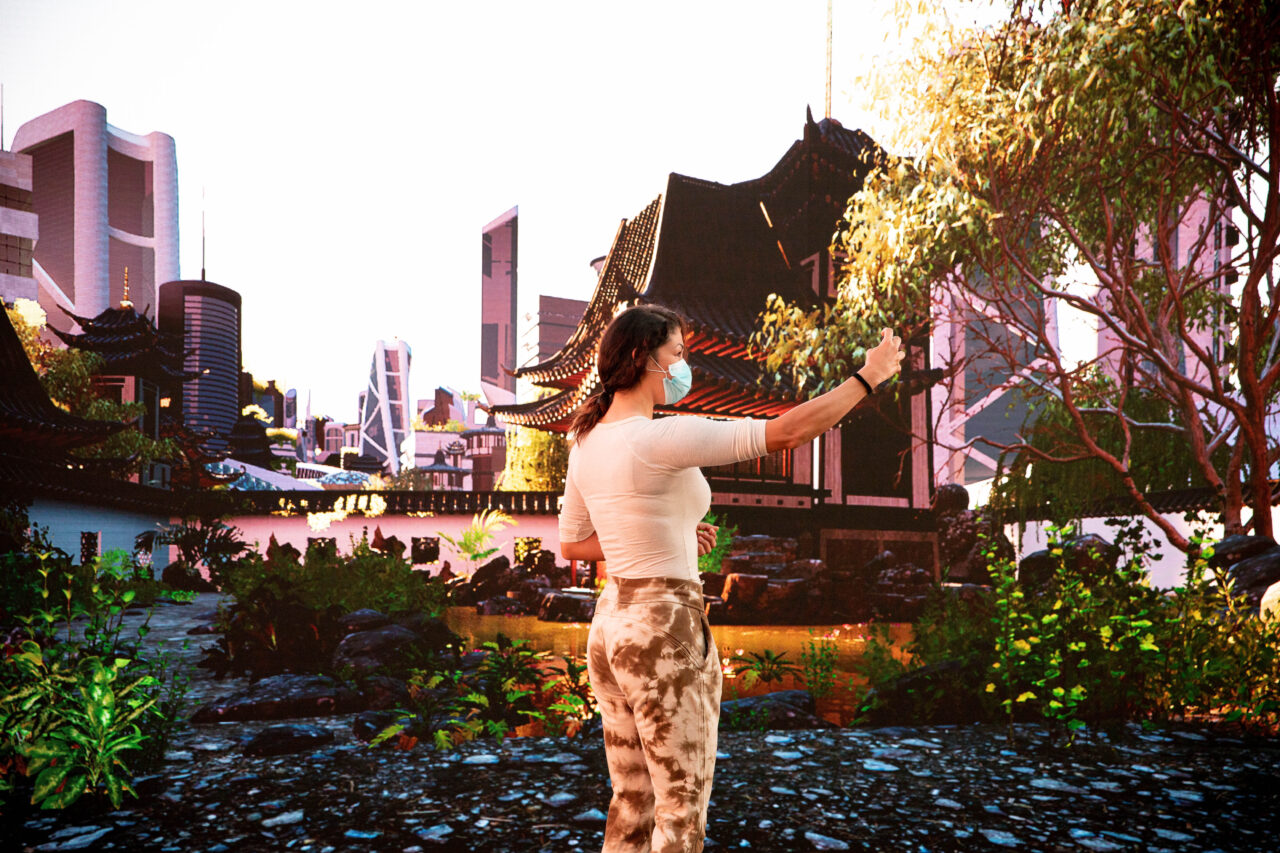 Actor Ashlea Earl pauses for a selfie on the virtual stage at the Synthesis trailer shoot. (Photo by Perrin Grauer / Emily Carr University)

Neil Ghaznavi, Virtual Production + VFX Supervisor with Arc VFX, later joined on to assist with what is known as “previsualization,” or “pre-viz.” Pre-viz is a new workflow for film productions, used most notably in special-effects heavy blockbusters such as the Marvel franchise films. Pre-viz uses game-engine technology — a suite of software, image and video libraries and support programs used primarily to create video games — to map out a film shoot long before cameras ever start rolling. This “revolutionary” new way of working allows filmmakers to run far more efficient film shoots.

“There’s so much money and time wasted on setting up a shoot, figuring things out, shooting scenes, and then fixing all your footage in post-production,” Sean says. “That whole term, ‘fixing in post’ — we don’t want to do that anymore. We want to plan our film in advance and we want to know what the effects are going to look like on camera from the beginning.”

The goal was not only to produce a short film demonstrating the production potential of this new workflow, but to create thorough, behind-the-scenes content to teach producers and new adopters about the technology — why it’s useful, how to use it smartly, how to incorporate it into a budget and how not to be afraid of it.

A pair of ECU students were brought in to contribute during the four-day film shoot. Artists Sharon Cheng and Caleb Ellison-Dysart, both of whom have previously worked as research assistants with the Basically Good Media Lab, were put to work helping to create 14 different digital “locations” wherein the Synthesis trailer would take place. 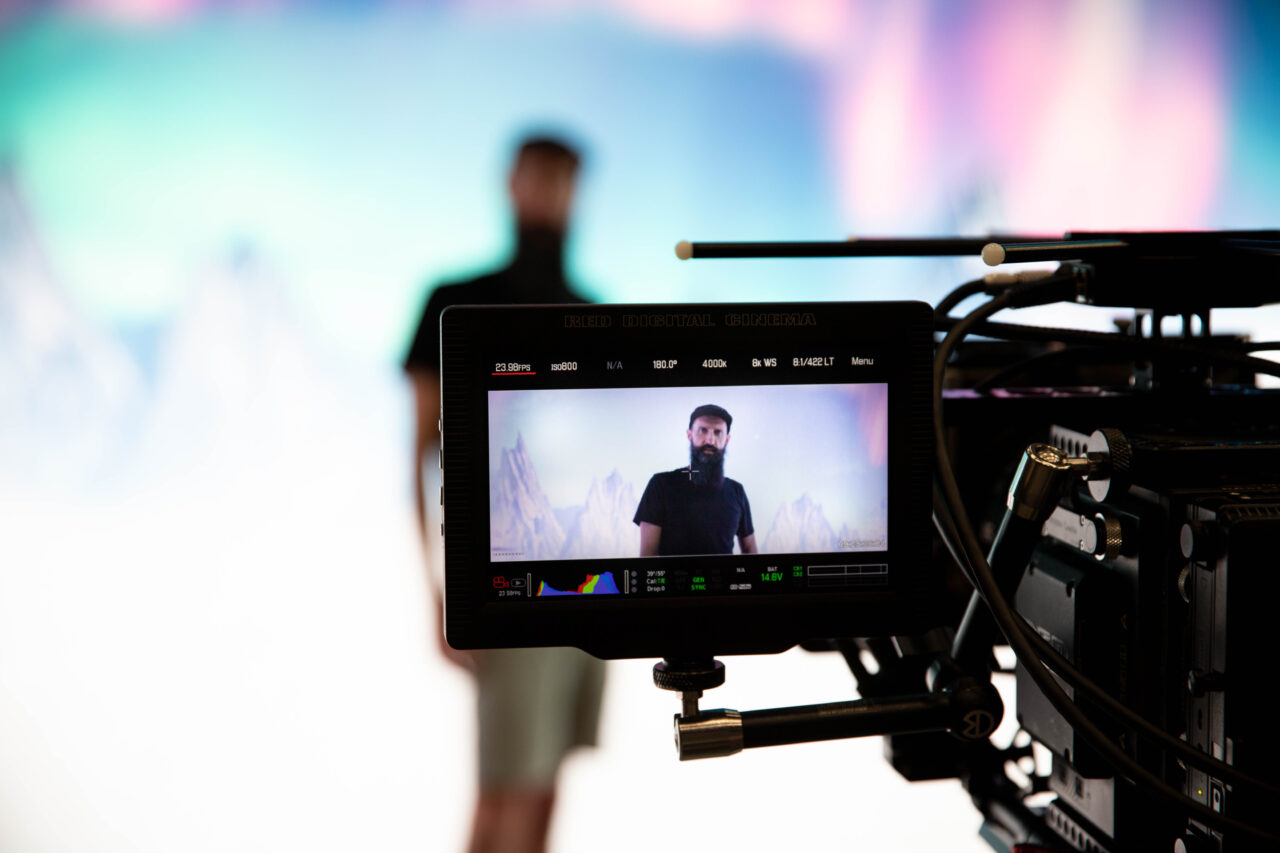 Once a background was on-screen, the cameras captured live actors in what appeared to be fantastical worlds. Visual effects staff, including Sharon and Caleb, were able to make live adjustments via on-set computers to cement the illusion as the film shoot progressed.

For Sharon, the experience provided both challenges and triumphs.

“I think we definitely had our own hard points; like, things didn’t go right all the time,” she tells me. “But we had each other, we had the team, so if things got messed up or if something didn’t render out properly we could all crack down and fix it together. Whereas if you’re alone and working on your own project and something goes wrong, you just have to deal with it by yourself. It was really nice.”

Caleb likewise notes that being one member of a team was an important supplement to the more solitary work of being a student — especially when that team is exploring new technologies and techniques.

“This is a newer workflow that people are still getting used to, so it was great to work with people in the industry, and to actually problem solve and create connections with them,” Caleb says. “They also gave us a lot of opportunities to figure things out on our own, which was great. So much of getting a good job after graduation is about being able to communicate effectively and knowing your own limits and understanding your value as an individual. So, this was a super valuable experience.” 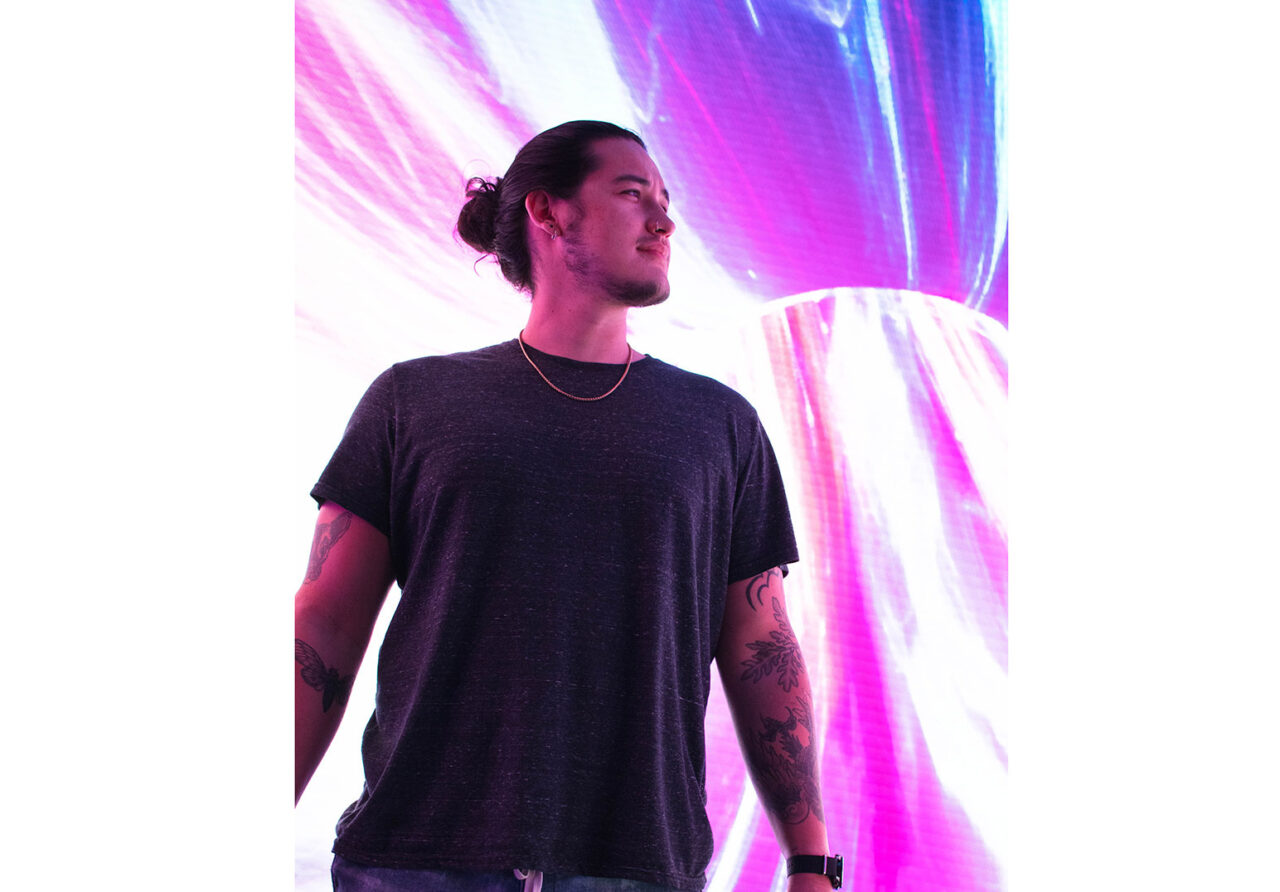 The completed Synthesis trailer provides a first look at the kinds of effects and productions that will be made possible as the partnership between Showmax and Emily Carr University moves forward.

Stay tuned for further details on the unveiling of this new facility, which will be forthcoming in the weeks ahead. Follow Synthesis: Season Zero, ArcVFX and Basically Good Media Lab on Instagram for updates, including a first look at the Synthesis trailer, which will be rolling out in January! Follow Sharon, Caleb and Sean on Instagram to see more of their work.